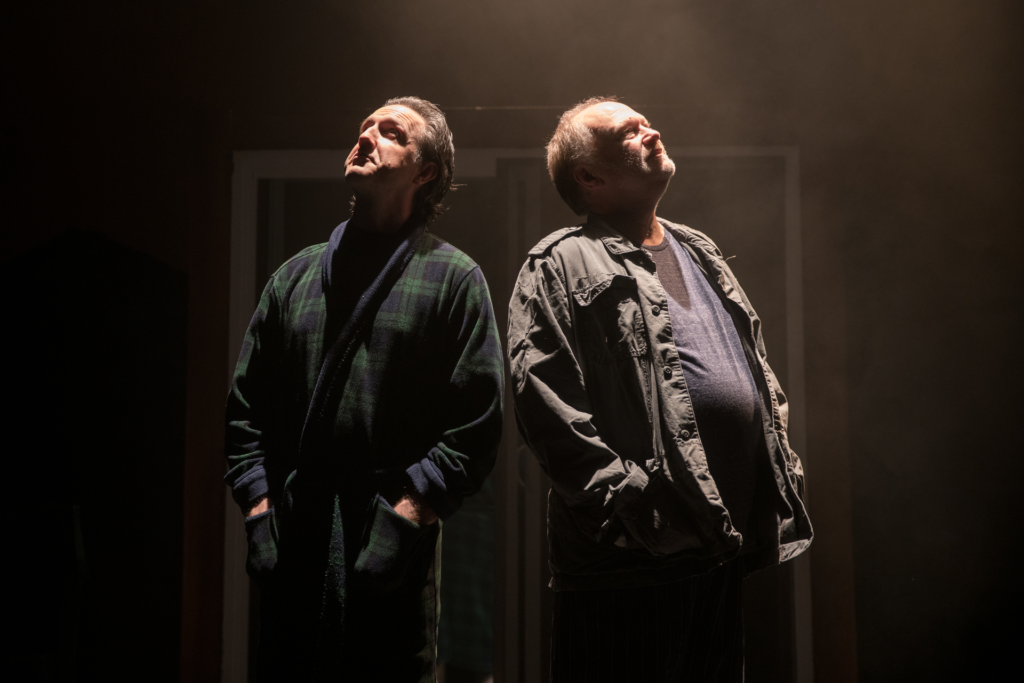 Kansas City Actors Theatre closes out its 12th season with a contemporary play — it opened on Broadway in 2014 — that’s more streamlined jet than workaday passenger aircraft. And it isn’t a production to see jet-lagged, lest you miss its many connecting flights of conversation.

Except they’re more often near misses. In The Realistic Joneses, effectively directed here by John Rensenhouse, playwright Will Eno’s abbreviated interactions and frequent non sequiturs create an environment of disjointed dialogue that emphasizes the alienation found in human attempts to bond.

Yet the play brings humor — a great deal of it — to its depiction of that void, that emptiness, by cleverly displaying the choices people make in reaching out or in maintaining aloneness, and sometimes loneliness, amid the social milieu of spouses, neighbors and friends. And it’s a setting in which the audience, too, must find a footing as the characters’ hit-or-miss approach to engagement leaves us sometimes off-kilter, grappling for solid ground.

It’s a small play — four individuals, making up two couples, who meet as neighbors in a small mountain town, a place that’s attractive for its vastness. Bob (a comforting name for dyslexics, his wife notes) and Jennifer Jones (Phil Fiorini and Carla Noack) are sitting outside on a night so quiet “you can almost hear the clouds go by.” Their conversation is both mundane and slightly awkward, as Jennifer tries to talk to Bob about an illness he’s confronting. “It just seems like we don’t talk,” Jennifer says. “I don’t know — we’re sort of throwing words at each other.” But Bob deflects: “I thought we were just sitting here.” (It’s like “marry me, then leave me alone,” Jennifer later laments.)

Their repose is interrupted by a loud ruckus over by the garbage cans. A raccoon, perhaps — they consider checking out this “unknown.” But it’s the new neighbors, suddenly appearing out of the dark: John and Pony Jones (Brian Paulette and Ashley Pankow), who, we come to learn, share more with Jennifer and Bob than just a last name.

The Realistic Joneses is an unusual work — different yet interesting, one theatergoer commented — that amid its disjointedness is also touching and, at times, quite moving. Bob and John suffer from the same ailment — a degenerative nerve disease — and it’s that future unknown that’s at the center of this play and these characters’ relationships.

Eno’s facile and inventive composition exposes his characters’ flaws and fears and coping mechanisms through not-so-simple acts of communication (or, anyway, attempts). In a series of scenes running one hour and 45 minutes, with no intermission (transitions are accomplished with ease and speed) — from Jennifer and Bob’s backyard to a local grocery store to John and Pony’s kitchen or backyard — the juxtaposition of the exterior and the interior reflects the disclosures and the avoidances of the people they contain. 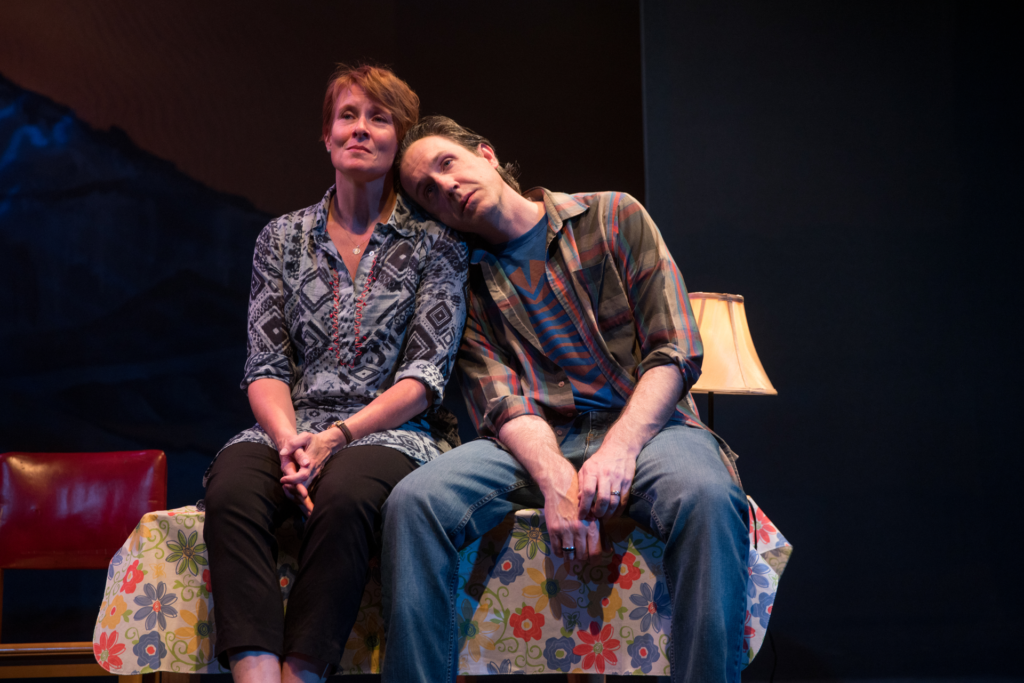 Noack lives and breathes Jennifer, lending complete naturalness to her character and facilely inhabiting this world where words can be inadequate and personal expression difficult. With Paulette’s John, she helps ground the play, the way she reaches out to others or seeks her own support. “You want the conversation to end,” she says to John, “and I want it to keep going.”

But John is a willing listener, and he finds some solace in her company as well, disclosing with her what he cannot with his wife. Paulette’s is a powerful and fluid portrayal, his John engaging, aloof, vulnerable, depressed, witty — and Paulette finds a particular rhythm in Eno’s punctuated diction.

Pankow has a quirky charisma as his wife, Pony, and she exposes her character’s inadequacy and fearfulness in a reality she doesn’t want to grasp. Even the name Pony connotes a childishness that seeps into her persona (though her character isn’t without self-reflection), and Pankow ably blends the cute and flighty with the evasive.

As Bob, Fiorini has a disengaged quality that may come with the symptoms of his storyline’s illness. But in this role, the actor appears too removed from the lines he delivers.

Shane Rowse’s lighting design serves as both illumination and backdrop to the events onstage and is particularly striking in a late scene between Fiorini and Paulette. And Jonathan Robertson’s sound — owls, cicadas, fireworks — brings the outdoors into the City Stage theater.

Eno has taken a personal and atypical approach to staring down mortality, of looking into the vast unknown. Yet, for all its seriousness of theme, The Realistic Joneses holds comedy within it, too. The nights I attended (see: jet lag), audience response was diverse but attentive and engaged. And while I ponder my experience(s) with these Joneses, I can’t help smiling at this insightful, skillful, circuitous work.