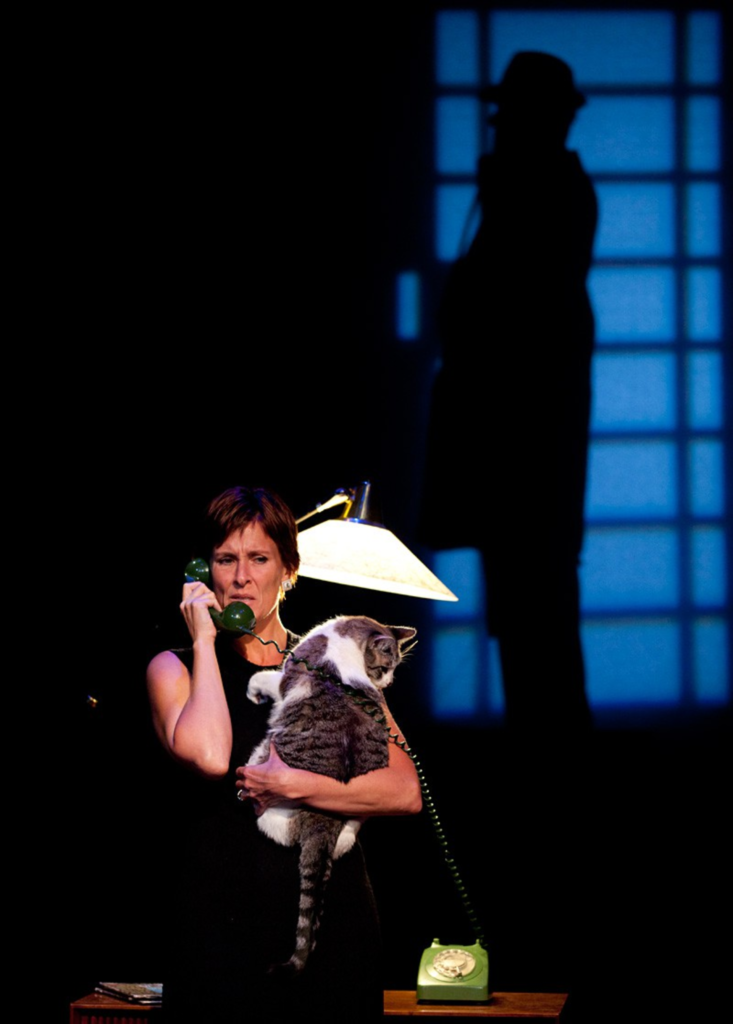 The Kansas City Actors Theatre is devoting the bulk of its short season to Harold Pinter, that master of menace, with two productions performed in rotating repertory. Think of it as a progressive dinner: The Birthday Party as meaty main course, followed by three lighter, slighter one-acts (The Collection, The Lover, Night) as salad, dessert and digestif.

All four works date back to the beginning of Pinter’s career, when he was poor and avid. And they show that from the start — The Birthday Party was only his second play — he wielded his lethal formula of undefined ominousness, mysterious sexual intrigue and brutal power plays. Also present is his honed-shiv wit, delivered with elegant economy of language.

From London’s rough East End and with a dark, thuggish glare, Pinter never shrank from offending, goading or terrifying. Though written a half-century ago, in a world far more orderly and well-mannered than ours, these plays still have the power to shock. They are remarkable for their casualness of trespass and alacrity of threat. On the evenings I attended, there were audible gasps of surprise and shrieks of startled laughter. Especially laughter. Pinter’s work is hilarious, all the more so for being so psychically disturbing.

Pinter is obsessed with truth and its elusiveness, with the slipperiness of language, identity and motivation. Everyday vernacular is worn smooth and meaningless from repetition. Competing versions of stories get slapped down like hidden cards at a poker game. Pinter leaves us with no doubt that we all live in delusion and obliviousness.

In these sharp, refined dramas, the KCAT proves itself as possibly the strongest ensemble in town. It’s a felony that Melinda McCrary is not seen onstage more often. She is a force of nature, exuding cool detail from a molten core, like lava lace. Her turn in The Birthday Party is not to be missed. Although the official theater season has yet to begin, it isn’t premature to declare her performance one of the best of the year.

McCrary’s Meg is a woman blissfully absorbed by her interior world, humming along to some private waltz, fitfully aware of the action around her. Affectionate, trusting and birdbrained, Meg is the kind of woman who finds bowls of corn flakes “lovely” morning after morning. Yet McCrary never mocks her character. Instead, she persuasively pulls the production into Meg’s orbit.

As Petey, Meg’s taciturn, modestly employed husband, Robert Gibby Brand makes his own statements with smart and underplayed moments. Petey is an Everyman, and his understanding of his wife and his selective interaction with the world are absolutely clear. His quiet reactions provide rich commentary on the action, and the last, important words are his.

TJ Chasteen flails a bit as Stanley, a depressive who’s so trapped in lies, he can barely speak or move. In a play in which all identities are unclear yet unquestionable, his is the only portrayal that reads as acting. It might be impossible to play an undecided person with decision, so this may be no fault of the actor’s.

As the sinister intruders and literal outsiders (a Jew and an Irishman), the redoubtable Mark Robbins and Brian Paulette barge in and nearly take the production hostage. When the intimidating duo interrogate Stanley, a trapdoor yawns open, and we tumble into the nihilistic cosmos. Who are we and where do we come from? What have we done and why did we do it? Can any of us answer these questions without breakdown? Robbins is especially comfortable with Pinter’s rapid and eloquent sadism.

Paulette is a revelation as McCann, “the life and death of any party” — a statement uproarious in its contradiction to truth. Reminiscent of Ralph Fiennes not only in looks but also in superciliousness and intensity, he seems ready to shoot lightning bolts from his forehead. Robbins and Paulette find every bit of humor in their roles without compromising the terror. As with Kafka or Peter Lorre, the funnier they are, the scarier, and vice versa.

The Birthday Party is impeccably directed by Bruce Roach with perfect tone and tempo. It and the rest of the productions are beautifully supported by Gary Mosby’s delightful set designs, Megan Turek’s costumes and Greg Mackender’s music.

The one-acts play more as comedies of absurdity than of menace. In Pinter’s insistent but fluid master-slave dialectic, one is either dominating or dominated, the roles shifting and reversing from one moment to the next. As in the homoerotic drinking session that goes awry in The Collection, there are knives enough for all. Under John Rensenhouse’s direction, The Collection‘s four-way illicit sexual maneuvers and investigations are as neatly structured as gavottes and make for polished amusement.

The Lover, often presented as a tragedy of embittered marriage, plays here as fond flirtation. The action begins with husband Richard inquiring as to whether his wife’s lover is visiting in the afternoon. The answer is yes, and the play is off on its suspenseful, sexy and comic romp, with McCrary and Robbins showing off bravura rhythm and chemistry.

Night is little more than a petit four, an anniversary card of a playlet. It proves that even Pinter had a soft side, and it ends the Pinter Project on a sweet note.