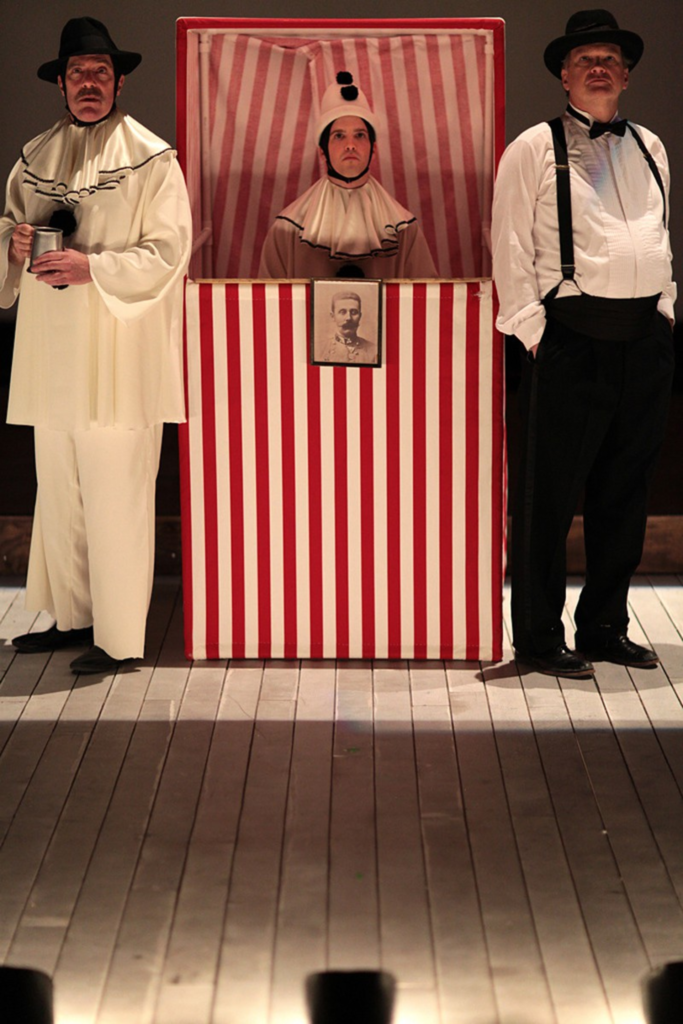 The Kansas City Actors Theatre and the UMKC Theatre Department, under the superb direction of Barry Kyle, have combined forces with the National World War I Museum to mount Joan Littlewood’s unapologetically anti-war musical, Oh, What a Lovely War! The result of this artistic collaboration is a stunning, one-of-a-kind theatrical achievement.

Oh, What a Lovely War! was a runaway hit when it premiered in London in 1963 (and Richard Attenborough made a movie of it six years later), but it has never before been produced as it is here, in a venue designed, as the Liberty Memorial was, to commemorate its subject, World War I. Though the tower is a familiar landmark in the heart of Kansas City, the museum is lesser known. The long, austere south lawn, flanked by twin drives, provides an appropriately somber approach. Once inside the museum’s monumental marble bulk, however, one enters the surprise of the brightly lit and red-upholstered theater, decorated with colorful pennants and crisp stripes in Erin Walley’s festive scenic design, which harmoniously unites carnival, vaudeville and seaside idyll.

The Bertold Brecht–influenced Oh, What a Lovely War! dispenses with narrative and employs the conceit of a music-hall variety program, a format that frees it to circle the question of war from disparate perspectives in an ever-shifting hurly-burly of satire, horror, heartbreak and grim cheer. The vaudevillian theme also gives the musical a tone of extreme animation and artificiality that accords with the false optimism and trumped-up solemnity of wartime patriotism.

The war in question is World War I, a desig­nation given only in retrospect, of course. It was called, at the time, the Great War and, for a short period after, “the war to end all wars,” a title that would prove to be overly optimistic. Songs and sketches jump from infantry trenches to military strategy rooms and from field hospitals to recruitment halls, revealing the archaic political alliances, gross ineptitude, avaricious war profiteering, and imbecilic prejudices that dictated the conflict’s absurd, tragic events.

Phil Fiorini is brilliant as the revue’s dapper, red-cheeked master of ceremonies, marbling his jollity with streaks of amorality. John Rensenhouse is exceptional as General Sir Douglas Haig, leader of the British Expeditionary Force, a man so blindly devoted to the “gentlemen’s code” of his upbringing that he’d rather sacrifice an entire generation of working-class men than take the advice of an officer lower in station.

The other characters are played by a mostly strong ensemble of UMKC graduate and undergraduate acting students (making them exactly the right age to portray young soldiers), with particular standouts Zachary M. Andrews (who, on the evidence of this production and UMKC’s recent King Stag, seems to thrive in clown roles), Grant Fletcher Prewitt, Dina Kirschenbaum, Greg Brostrom, Kelly Rebecca Gibson and Mark Thomas. The students compose a troupe of Pierrots, the classic white-suited clowns of commedia dell’arte, with their associations of innocence, sadness and eloquent silence. Their soft-shoe routines, waggish demeanor and easily collapsible bodies express volumes. The musical numbers (under the leadership of musical director Timothy Munger), with their peppy, nostalgic melodies and razor-sharp lyrics, tell the rest: propaganda anthems, recruitment songs (We don’t want to lose you, but we think you should go), the ditties that soldiers sang in an attempt to raise bravado in war zones with insanely high casualty rates (Are we downhearted? No!) and, most touchingly, the carols exchanged by opposing sides in the Christmas Truce of 1914. A live band con­tributes invaluably to atmosphere.

In its presentation of war as gruesome spectacle, Oh, What a Lovely War! owes much to its crack production crew, especially Jennifer
Martin’s vaudeville-era choreography; Richard L. Sprecker’s excellent lighting design; and Suzanne Mann’s costume designs, which manage to be both innocent and satirical (with consultation for historical accuracy provided by the museum’s curatorial staff).

Completed in 1926, just eight years after the end of World War I, the Liberty Memorial was built as a tribute to the hundreds of thousands of Americans who gave their lives in what was then believed to be the last war humankind would fight. The main inscription reads in part: “Let us strive on to do all which may achieve and cherish a just and lasting peace.” That Oh, What a Lovely War! leaves us yet hopeful for humanity and its chances for peace is perhaps its greatest triumph.