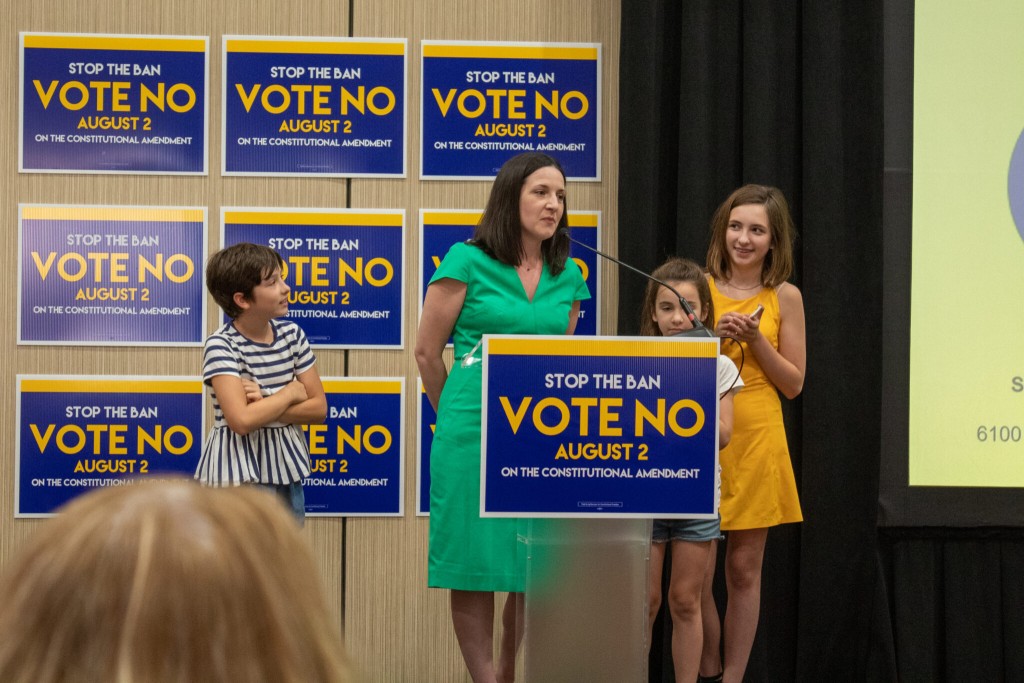 TOPEKA — For Ashley All, the effort to defeat a constitutional amendment that would have eliminated abortion rights is the most consequential campaign the Kansas political veteran has worked on.

The issue is personal, All told news reporters during a conference call Wednesday morning.

As spokeswoman for Kansans for Constitutional Freedom, All helped abortion-rights activists hone a disciplined message that transcended partisan politics and resonated with Kansans across the state. The organization successfully characterized the constitutional amendment as an attack on personal rights and freedom.

A surge of Kansas voters responded by rejecting the amendment in an unexpected landslide. The final results from Tuesday’s election showed a 59-41 margin with more than 900,000 ballots counted, a high-water mark for an August election in Kansas.

“This outcome was a surprise to most observers and even to many of us that have been working on this campaign for years at this point,” said Rachel Sweet, campaign manager for Kansans for Constitutional Freedom. “The deck was stacked against us from the beginning. From the moment lawmakers passed this amendment back in 2021, and put this vote on the 2022 primary ballot, we knew this would be an uphill battle.”

Instead of giving up, Sweet said, “we got to work.”

The organization built a nonpartisan coalition of voters who knocked on doors and worked the phones.

“We helped Kansans understand that this amendment would lead to an extreme ban on abortion that would put the lives of women and girls at risk,” Sweet said.

Supporters of the amendment said the fight is far from over. Attention has already turned to Kansas Supreme Court justices whose 2019 ruling — which found the state constitution’s right to bodily autonomy includes the decision to terminate a pregnancy — moved anti-abortion forces to draft the constitutional amendment. Six of the seven members of the court are up for a retention vote on the November ballot.

Anti-abortion lobbyists also could attempt to put another constitutional amendment before voters, or urge the Legislature to test the limits of abortion restrictions in state courts.

The Value Them Both Coalition put out a statement calling Tuesday’s vote a temporary setback.

And U.S. Sen. Roger Marshall in a statement Tuesday night said he was disappointed by the blow to the sanctity of life, and vowed to keep fighting.

“Too many times I’ve seen sadness and hurt, without an explanation why — this is one of those moments,” said Marshall, a Kansas Republican. “While I don’t have an answer, I do know that God works all things for good for those who trust him.

“Each of us will have to pray and look in our hearts to see what’s next,” he added. “However, we must not rest as there is much work to be done to support moms who are contemplating abortion, and decide instead for life. Let us all reach out and give them all the help and hope we can.”

All, who has worked on campaigns in Kansas for the past 18 years, said the unprecedented level of energy behind the effort to preserve reproductive health care rights was inspiring.

She said the U.S. Supreme Court decision to overturn Roe v. Wade was a wake-up call for moderate voters who believed their rights would be protected at the federal level. The already-scheduled vote on the abortion amendment in Kansas provided a unique opportunity to mobilize voters, she said.

The decisive outcome, All said, is an indicator that Americans want to protect their ability to make decisions about their bodies and health care.

“People really want to protect those rights and believe that people ought to be able to make decisions for themselves and their families,” All said. “That is something that would resonate no matter where you live in the country.”

All said the next step is to keep people engaged for the battles ahead.

“Kansas has a really complicated and unique history on this issue, decades of extreme policies, bans, extreme tactics from the other side that really brought us to this moment,” All said. “I did not expect it to end here.”