When I get depressed, I go to the movies so I can lose myself in the suffering of others.

I try to hold off my crushing existential sadness until summer, though, because that’s when whatever indifferent force stranded us on this godless plane at least gives us big-screen, wholesale suffering in super-volumized, punishing 3-D. Let’s eat some tepid nachos and watch cities burn and civilizations crumble. Air-conditioned nihilism, fuck yeah.

Tell you what, though: I saw Jurassic World a couple of nights ago, and I’m OD’d until at least October. It’s such an instant classic of rock-’em, sock-’em suffering that no other cinematic leveler of populations stands a chance. The only thing worse than not seeing it at all would be having to sit through it a second time.

Jurassic World hates tourists, kills swaths of the entitled so-and-sos by tooth and claw. Jurassic World loves brontosauruses but kills a bunch of the quiet giants anyway, despite their lack of entitlement or suntans, because it hates your bleeding heart. (You like herbivores? Go home and see if Hulu is streaming Baby: Secret of the Lost Legend, ya hippie.) Jurassic World hates feminism, slaps it around like it’s a hooker in a Rudy Ray Moore grinder. Jurassic World hates you, hates me, hates every living thing except star Chris Pratt (stiff in an extended Indiana Jones audition). Goddamn, this thing doesn’t just flip the bird to everyone in it and everyone watching it — it whistles “Everything Is Awesome,” leisurely extends an arm and flips a pterodactyl.

Especially to Jurassic Park, the 1993 Steven Spielberg movie to which this is both sequel and reboot. 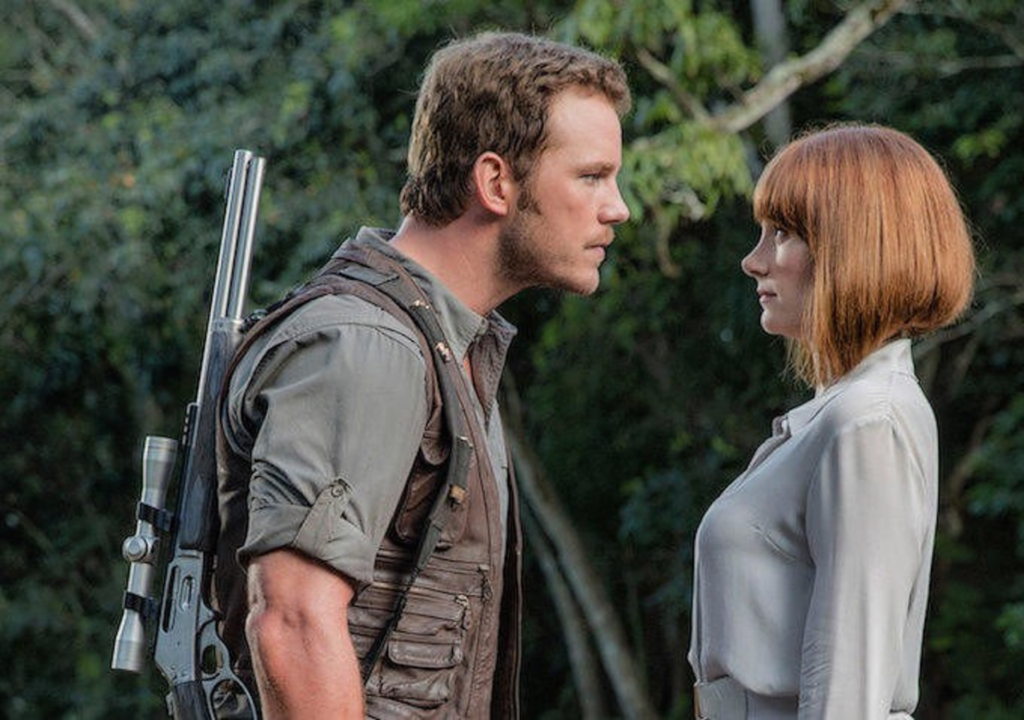 Like the original, World filters its dinosaur awe and its sense of jeopardy through a pair of siblings (Ty Simpkins as the younger, eggheaded brother, and Nick Robinson as the girl-distracted teenager) who are, again, the last to know what’s going on but the first to evade early slaughter. Unlike the original, that slaughter extends to a peck or two of hapless visitors to the hugely successful dinosaur theme park where the movie’s action takes place. In the two decades between Park and World, you see, retail science has triumphed over bloody lessons, making a tropical wonderland out of John Hammond’s blinkered hubris. And, in an overheated but undercooked subplot, the prehistoric DNA that has made possible this Disney-fied demonstration of the cruel food chain (various commonplace mammals are fed to dinosaurs, to the whooping delight of vacationing families) is also being secretly recombined to breed weaponized dinosaurs for a Blackwater-like contractor. The face of this military-dinosaur complex is Vincent D’Onofrio, turning his ham dial well into the pink as he exclaims things like “If only we’d had these in Tora Bora!”

He means the super-dino Indominus rex (a name that would have fit right in among the desert baddies in Mad Max: Fury Road), the bloodthirsty creature that sets World‘s CGI mayhem in motion. The hide-and-seek game with that monster, by the way, is the extent of the movie’s plot, unless you count the unapologetically retrograde thawing out of career woman Claire (played by two high-heeled shoes and a bowl of tears posing as Bryce Dallas Howard) and her ovaries by the musky glow of a real man and the terrified screams of helpless children.

But let that Tora Bora thing sink in for a second: With mad science itself apparently no longer enough motivation for the morally suspect characters bolted onto a story like this for sheer hiss factor, World adds the shadowy precincts of the U.S. war machine. It offsets this bit of Bush Doctrine by making Pratt’s raptor-taming hero ex-Navy (with Pratt himself a veteran of the hawkish Zero Dark Thirty), and of course by ensuring that D’Onofrio’s villain is exposed as a coward. In any other cross-pollination of whiz-bang family fun, PG-13-stretching violence and awkward geopolitics, casting the fine Indian actor Irrfan Khan as the theme-park mogul would be nothing more than a pleasant surprise. But Jurassic World makes Khan’s character the audience’s ethical avatar as well as the first half’s comic relief, a demeaning choice that underscores the movie’s odd anti-globalism. (See also: Park survivor B.D. Wong is a scheming Asian hiding behind a warm smile, and UK-accented actress Katie McGrath becomes a rare air-land-and-sea casualty.)

It’s hard to blame director Colin Trevorrow, working under much acknowledged oversight from executive producer Spielberg, for wanting to cram every last idea into this thing. And he seems at first to have chosen his targets with some intriguing, and somewhat self-effacing, precision. Spielberg has said that Trevorrow’s leap from shoestring-budget indie — the relatively gentle Safety Not Guaranteed, from 2012, is his only prior feature — to this leviathan echoes his own move, 40 years ago, into record-book moviemaking. If Safety was the younger man’s Sugarland Express, Jurassic World is his Jaws. That analogy is clearly not lost on the protege, whose script (Trevorrow shares screenplay credit with three other writers) includes more than a little meta ambivalence toward blockbustering pander-monium, and uses the plot’s ruinous gene splicing as a metaphor for same. But it’s less cleverness than anxiety that drives those touches, which fall away and drown in illogic and blood. Nobody figured that Jaws would blow up the box office; today, everybody figures that Jurassic World had better tower over the competition, or else. So the few subtle notions at play here soon get dino-squished in the trample to make good on all the money at stake, and we end up with a Spielberg-approved theme-park trailer that seems to kind of hate itself.

Not more than it hates everybody else, though. Which makes it sort of perfect for those who like some punishment in their big summer movies, even as it challenges the inevitable sequel to splice in something even darker. Are we going to send dinosaurs after the Islamic State?