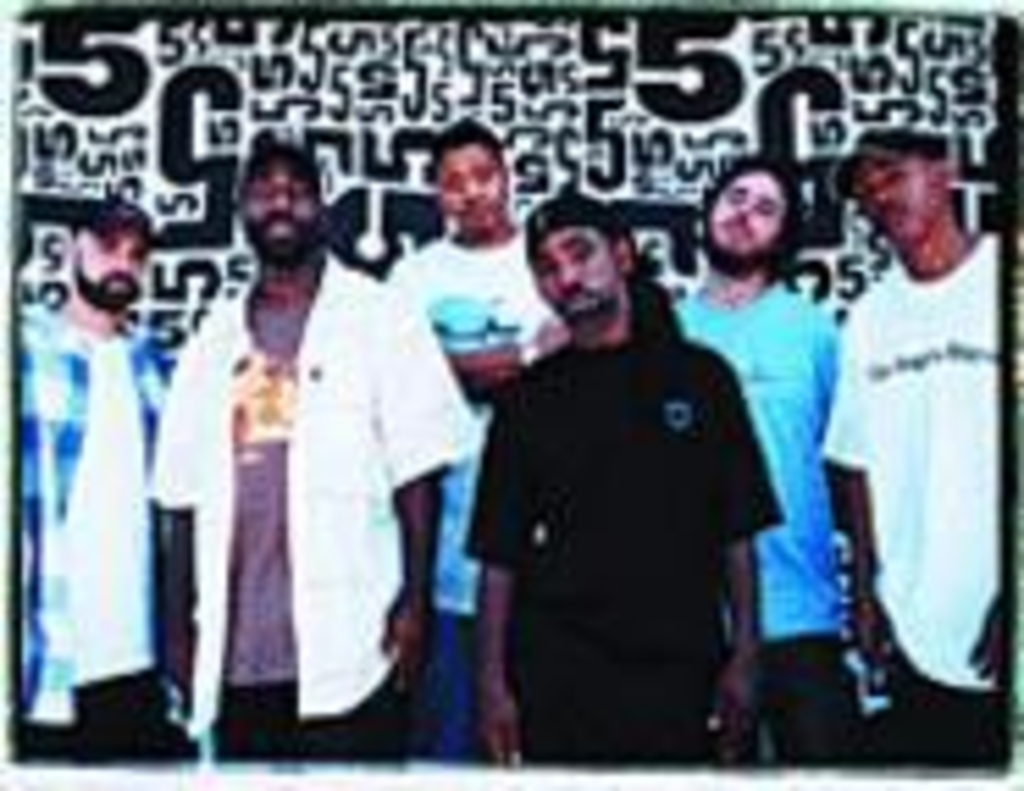 You can tell from the rumble in Chali 2na’s voice that the no-nonsense MC has had enough of the “alternative” talk. He knows damn well what’s truly alternative when it comes to hip-hop. “That bling-bling shit,” he fumes. That’s alternative.

In the past decade, rappers and rockers have reacted similarly to the alternative tag. In both camps, the word has come to connote the exact opposite of what it denotes, meaning that “alternative rap” is dismissed by ghettocentric hip-hop heads for being soft and vaguely suburban (or just plain white).

The label is also taken as an insult by hip-hoppers because it suggests that the artists are outside the mainstream of a beloved tradition, one that many intelligent rappers wouldn’t consider corrupt simply for being commercial.

Which brings us back to Chali 2na’s ire.

“OK, check this out,” the deep-voiced Jurassic 5 rapper says from a cell phone, as his tour bus winds through the mountains of Oregon. “The word alternative as it applies to our style of hip-hop is bullshit. We try to take you back to the essence of what hip-hop truly is, and we get called alternative simply because what’s popular is that bling-bling shit.”

Of course, that’s always been the standard defense of rap artists — I’m the real shit; you’re a sucker MC. But spin any of Jurassic 5’s celebrated releases, and any hip-hop fan old enough to get the reference in Chali 2na’s stage name (think Charlie Tuna) will instantly understand his claim to the heart of the tradition. The newly released Power in Numbers might be a bit tougher and more consciously constructed than the group’s looser, more spontaneous previous discs — a 1997 EP and the 2000 debut album, Quality Control — but it lays claim to the same central turf.

We’re paying homage as well as returning favors, the crew’s four MCs rap in unison on “Break” as the beat hits a straightforward funk groove, a spare guitar sample offering simple counterpoint. The rappers’ flow is reminiscent of that magic moment at the end of the ’80s when hip-hop sat at the crux of an explosive fragmentation. At once, the sound is reminiscent of A Tribe Called Quest (major figures in the first alternative rap wave) as well as earlier multi-MC groups like Stetsasonic and light-touch specialists such as Big Daddy Kane. In fact, that dean of the old school makes an appearance on the perfectly titled “A Day at the Races,” a bass-driven speed rap that could’ve been a club smash in ’88.

“That’s just us, man,” Chali says. “I mean, we just regurgitate what we are. What we loved about hip-hop, we try to emulate, but at the same time we try to bring it up. Our style and our being is influenced by the Tribes Called Quest, the Run-DMCs, the Cool Js, the De La Souls.”

Though Chali and his five partners have been making full-length albums for only two years, they’re more survivors than revivalists. The group was formed back in 1993 from two separate crews, Rebels of Rhythm and Unity Committee. Both crews congregated in South Central Los Angeles at the Good Life Café, an open-mic space that attracted heads who weren’t interested in the gangsta rap that was at the center of national attention.

“You couldn’t get a record deal without being a gangster at the time,” Chali says. “Our stuff didn’t exist in clubs. We had to create spots for our stuff and generate our own audience.”

It wasn’t only Jurassic 5’s words and beats that differed from the gangsta norm but also the crew’s multiracial composition. (Its two mastermind DJs are white.) For years, the group survived by focusing on the European market. Only when Jurassic 5’s self-released EP hit the English Top 40, in 1997, did major U.S. labels finally get the message. Now the crew is sharing its limelight with other history-conscious, progressive groups such as Blackalicious, Dilated Peoples, and Slum Village. The exposure has paid off, too: Power in Numbers debuted last week in the Billboard Top 20, selling more than 50,000 copies.

And yet, as with most of today’s progressive crews, it’s hard to shake the suspicion that Jurassic 5 has major-label support because its stance is so unthreatening. Power is loose enough to wash away any chalky PC aftertaste (the kind that dries out the Roots’ albums), but its smooth flow doesn’t run deep, and its lyrics only track in warm political abstractions. Surprisingly, Chali doesn’t deny that this might make his crew more commercially palatable than more pointed artists like the Coup or Mos Def. “That may be the case. I’m not sure. But however the medicine goes down, hopefully the cure is swift, you know what I’m saying?”

Not really. But will the cure be heard the way that the 32-year-old Chali heard De La Soul or Big Daddy Kane in his youth? After all, Jurassic 5’s fanbase remains mostly white, and breaking out of that box will be a challenge. “I won’t say it’s been tough, but … yeah, it has. But, I mean, I don’t mind. I can’t ask for the audience. We can only push to see what happens.”

Chali also hints at greater reasons for continuing to preach the old-school testament. His refusal of gangsta life, it turns out, didn’t result from the high road of privilege but from a trying personal struggle.

“I come from a poor, one-parent household,” he reveals. “I was able to move to California with my grandmother while my mother still stayed in Chicago, struggling. One of my best friends got killed, like, I don’t know, three feet from me. And one of my older cousins got locked up, man, six years, federal pen. I was posed with the question ‘Do you want to stay here with your mom, or do you want to go to L.A. with your grandma?’ I left.”

Chali 2na hasn’t stopped moving, and Jurassic 5 is taking along anyone willing to follow.