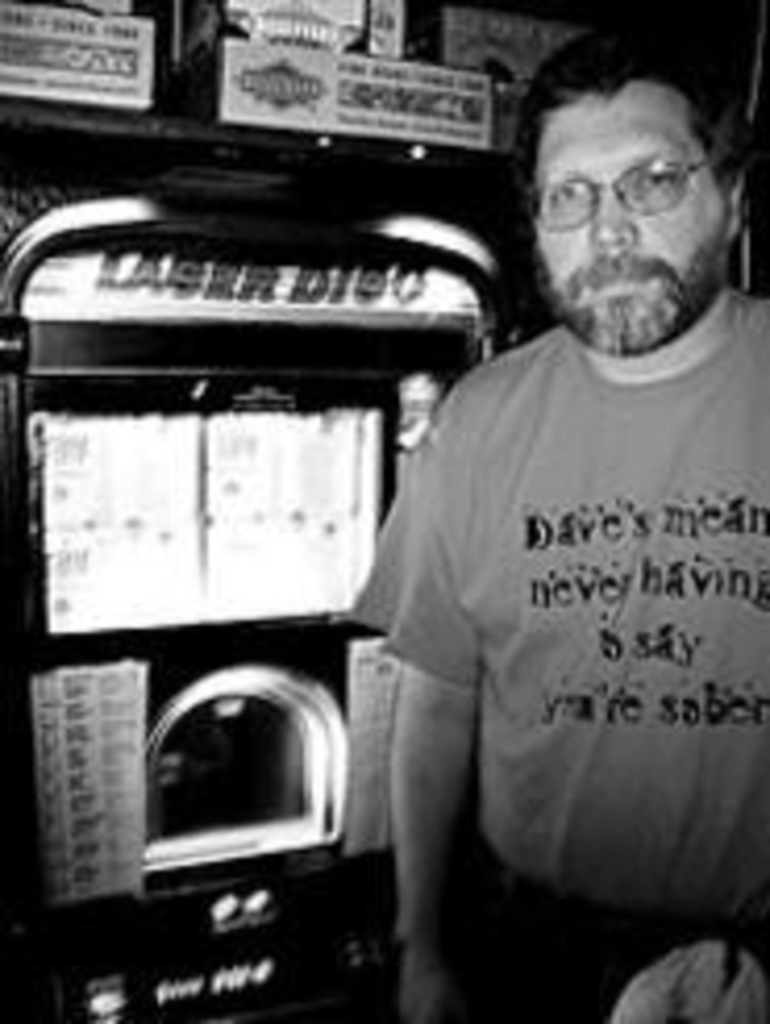 It’s a Thursday night at Dave’s Stagecoach Inn — the Westport dive that’s as likely to host a fashion-mulleted hipster as a toothless welder — and all eyes are on the jukebox. John Yuelkenbeck, part-time bartender and proprietor of the undisputed best jukebox in town, begins posting clues every hour that will eventually lead — by some occult series of associations — to the song of the night. When someone eventually plays the track, everyone in the house gets a free drink. For three hours every week, this game is followed more passionately than any Chiefs match.

Before Jukebox Roulette gets going, Yuelkenbeck plugs in a dollar and spins a few Tom Russell tunes — soulful, outlaw-country stuff that most people can’t distinguish from the Johnny Cash catalog.

Yuelkenbeck has a personal history with Russell, one of those musician’s musicians whom everyone (Bruce Springsteen, Cash, Lucinda Williams) has covered but whom few casual country fans have ever heard of. Over the years, Yuelkenbeck has managed Russell’s fan club and Web site. He’s traveled with Russell to Ireland, accompanied him on a cross-Canadian train ride and has toted his guitars to a David Letterman gig. He’s produced a CD of Russell rarities and hosted the man himself at Thanksgiving. And when Yuelkenbeck turned 30, he got a blue bird-wing tattoo on his left arm to commemorate a certain Russell song.

Yet it wasn’t “Blue Wing” but rather “William Faulkner in Hollywood” that initially attracted Yuelkenbeck to Russell. He first heard the number on a road trip to California.

“I listened to it on repeat all the way from Las Vegas to Kansas City,” Yuelkenbeck says. Not surprisingly, Yuelkenbeck was an English major in college. But he’s mainly a sucker for the dark love ballads.

“People tell me I like depressing music,” he says. Russell, who sings about cocaine more often than most troubadours, seems to like a little doom and gloom, too.

Back at the bar, David Buchmann, a blond-haired Dave’s Stagecoach regular (and fellow former English major) who lately has been the wunderkind of Jukebox Roulette, is doing his best to decipher Yuelkenbeck’s ultra-obscure clues. After a few minutes of hopeful rumination, Buchmann begins playing random Rolling Stones songs, hoping one will be the money shot. In the end, he doesn’t get it — to everyone’s disappointment — but he wins himself a free PBR by guessing the original working title for “Brown Sugar” (look it up — we’re not that alternative).

The lesser-known, bluesy Stones numbers that Buchmann picks evoke the same drunken, desperado spirit for which Russell is known. Unfortunately, according to Yuelkenbeck, Russell hasn’t been to KC in a while, preferring the more appreciative St. Louis crowds. Yuelkenbeck hopes that when Russell lands at Davey’s Uptown Ramblers Club this week, he’ll see that he’s not playing for a withering folkie market but for a new generation captivated by their elders’ gutbucket roots music — rather like the rabble gathered around the jukebox at Dave’s, praying for that elusive free drink.