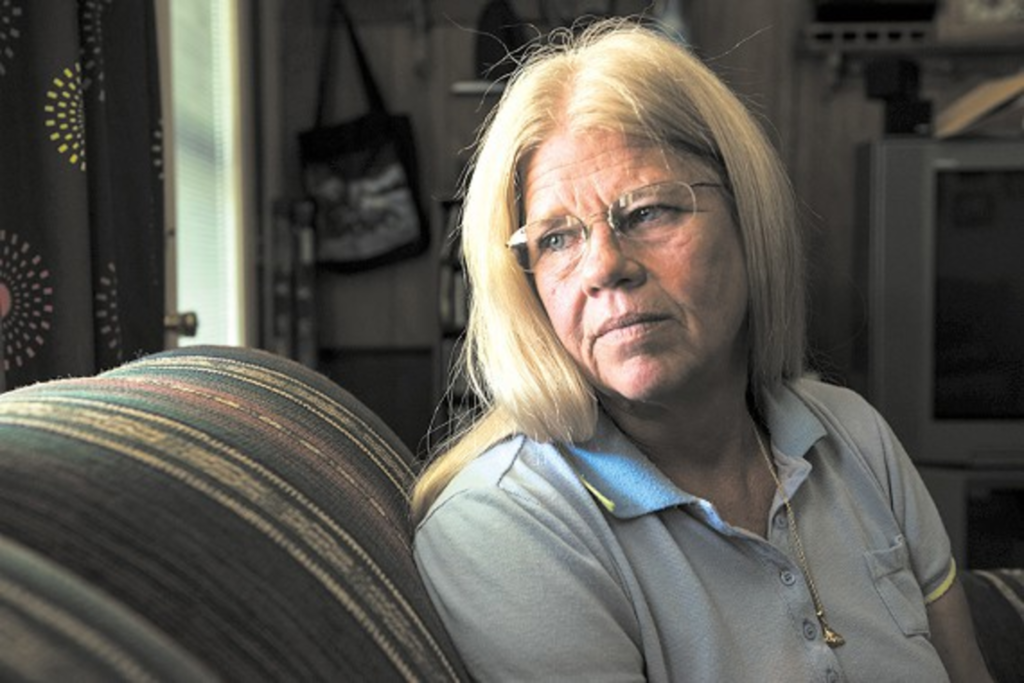 For Joy Biggs, the memories of January 22 in the Sherman County jail (“the Bastille,” locals call it) are still as vivid as the day they happened.

“I can’t stop thinking about my sister dying there,” Biggs tells The Pitch. “It’s all too much.”

Biggs remembers the dirty, western Kansas jail cell where her sister, Brenda Sewell, was lying, her life ebbing. She remembers screaming for guards to help her sister. No one did.

Sewell had been throwing up forcefully for more than 24 hours. Then her vomit turned to blood.

The two south Kansas City women ended up in the Bastille in Goodland two days after they were stopped for speeding — going nine miles over the legal limit — on Interstate 70.

A Kansas Highway Patrol trooper said he smelled pot in the passenger-seat area where Sewell was sitting, according to the trooper’s report. Sewell, who owned the Cadillac, confessed to the trooper that she had marijuana, a little over an ounce, and it belonged to her, not her sister, the report said.

Sewell, 58, told the trooper that she used marijuana for medicinal purposes because she had a host of illnesses, including fibromyalgia, thyroid disease, rheumatoid arthritis, hepatitis C and Sjögren’s syndrome.

After watching her sister die in a jail cell, Biggs was set free. But she hasn’t wakened from her nightmare.

Biggs, 54, has a long history as a law-abiding citizen, but she can’t escape the long arm of the law in Sherman County. As The Pitch was going to press Tuesday, she was scheduled to plead guilty to a felony charge for failure to purchase a drug-tax stamp and to a misdemeanor for possessing marijuana.

Biggs says her attorney warned that if she went to trial and lost, she could face four years in prison. As it is, she could get six months of probation and a fine.

She adds that a guilty plea could mean the end of her job as a school-bus driver. Drivers are not allowed to have felony convictions. But she says she couldn’t afford to go to trial and fight the charges, especially because the trial would be held 400 miles away.

Biggs says she can’t understand why she is even charged with a crime after what happened to her sister. Especially because it wasn’t her pot.

For the trip to Colorado, her sister had taken with her about 20 grams of marijuana to treat her ailments. In that state in January, recreational marijuana had become legal, and when an opportunity arose, Sewell bought several more grams.

In the police report, the trooper wrote that Biggs “made statements that she made a mistake regarding the marijuana” but didn’t give context to Biggs’ comments.

Biggs says she told the trooper that it was a mistake because her sister should never have bought the marijuana and that she “didn’t live her life like that.”

First-time offenders often get a break when it comes to violating marijuana laws because a large number of Americans have come to believe that medicinal and recreational uses of the plant shouldn’t be a crime.

Biggs is not getting a break.

“It’s western Kansas, you know what I mean?” says family lawyer Bill Norton. “It’s a bad deal all the way around.”

Sherman County prosecutor Charles Moser did not return a phone call requesting an interview for this story.

Biggs’ criminal attorney, Todd Stramel, of Colby, also would not comment for this story.

Tai J. Vokins, a civil rights lawyer in Johnson County, says state law requires district attorneys to have a diversion program for first-time offenders. It is intended to give those who commit a relatively minor crime a second chance. It means, Volkins says, that if you “basically keep your nose clean” for a year or so, the record is expunged.

Vokins adds that Biggs appears to be a prime candidate for such a program.

Although Kansas has some of the most draconian drug laws in the country regarding marijuana, the state often goes easy on first-time offenders, says Paul Oller, a longtime criminal-defense lawyer in Hays.

Oller says he had a client who was a jazz musician, traveling across the country to his gigs in an RV. He had 10 pounds of pot when he was pulled over. He told authorities that the pot was for recreational use; he bought it in large quantities so that when he was on the road, he didn’t have to buy from strangers.

The prosecutor agreed to reduce the charges to personal consumption, Oller says.

In Missouri, first-time offenders can get reduced charges, too. Kansas City Chiefs receiver Dwayne Bowe was charged with speeding and possessing more than 10 grams of marijuana late last year in Riverside.

In April, Bowe pleaded guilty in municipal court to amended charges of defective equipment and littering. He paid $610 in fines.

“Like others charged with speeding and possessing marijuana for the first time, Mr. Bowe pleaded guilty to amended charges,” says Riverside prosecutor Amy Ashefford. “It’s important to me that Mr. Bowe be treated no differently, either, with a harsher or lesser punishment than any other person in a similar situation.”

Doug Bonney, legal director of the ACLU of Kansas, says if Sherman County officials want to be “hard-ass” about it, they can under Kansas marijuana laws.

“In many places, a first-time offender, you would get a much better deal,” Bonney says. “But if they want to play hardball, they can play hardball.”

Sewell’s death received publicity around the country and was also highlighted in a television documentary produced by KSHB Channel 41.

When the sisters were arrested, they were placed in a cell with inmate Louann Medrano. Another inmate would arrive the next day.

In the cell, a dirty toilet sat open in a corner — a rusty, lime-corroded drinking fountain was attached to the top of it. Two sets of bunk beds stood along the walls.

Jailers refused to give Sewell her medications because they weren’t in prescription bottles.

Hours after eating Salisbury-steak TV dinners, Sewell began vomiting. Soon, she couldn’t make it to the toilet and was given a small plastic tote to puke into. Several times, she accidentally vomited on the floor, and the three women were ordered by jail guards to clean it up without any protective gear.

The morning of January 22, Sewell appeared to be having a seizure. Fluid was spurting from her mouth, and she was speaking gibberish, Biggs says.

Then she went limp, and the women laid her on the floor, performing CPR and screaming for help. A jailer peered through a window but did nothing, Biggs says.

Finally, Sewell was removed from the cell, and soon after, she was pronounced dead at a local hospital.

Many questions surrounding Sewell’s death may have been answered by an investigation by the Goodland police, the sister agency of the Sherman County Sheriff’s Office. But the investigation and its results remain secret.

Moser was given the file in February but has refused to make it public. He points to Kansas law, which allows him to keep results of investigations confidential.

“It is my policy not to release” investigations, Moser told a reporter in February.

Biggs says her family has paid a terrible price for a small amount of marijuana, and others agree.

“It seems to me, if I have someone who dies in my jail, and I have 31 grams of marijuana, I would dump out the marijuana on the ground and let it go,” says Oller, the Hays defense lawyer. “She probably paid a high enough price as it is.”