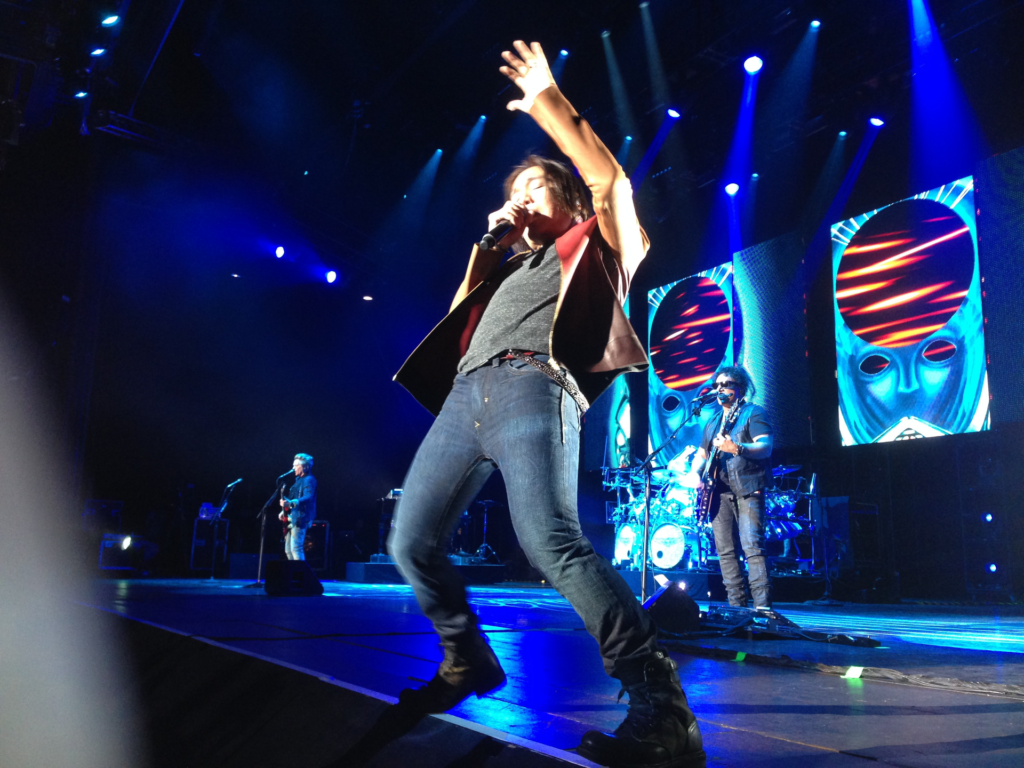 Arnel Pineda is the best thing to happen to Journey since Steve Perry’s hip-replacement surgery.

He proves that the best way to get to Carnegie Hall is YouTube, where he was famously discovered by guitarist Neal Schon. And the crowd at Starlight Theatre, which according to Schon broke the venue’s record for attendance, loved him.

Clearly happy to be here, every member of Journey had ridiculously huge smiles as they took the stage and charged through the band’s last top-10 single, 1986’s “Be Good to Yourself.” From there on, it was hit after hit after hit, with just a few breaks.

The first came when Schon played a solo Hendrix-inspired take on AOR staple John Stafford Smith’s “The Star-Spangled Banner.” Don’t worry, Kansas City did not fail to chime in with “Home of the Chiefs” at the appropriate point. Also, it cannot go unsaid that when Schon has his sunglasses on, he bears an uncanny resemblance to Grinders’ Stretch. 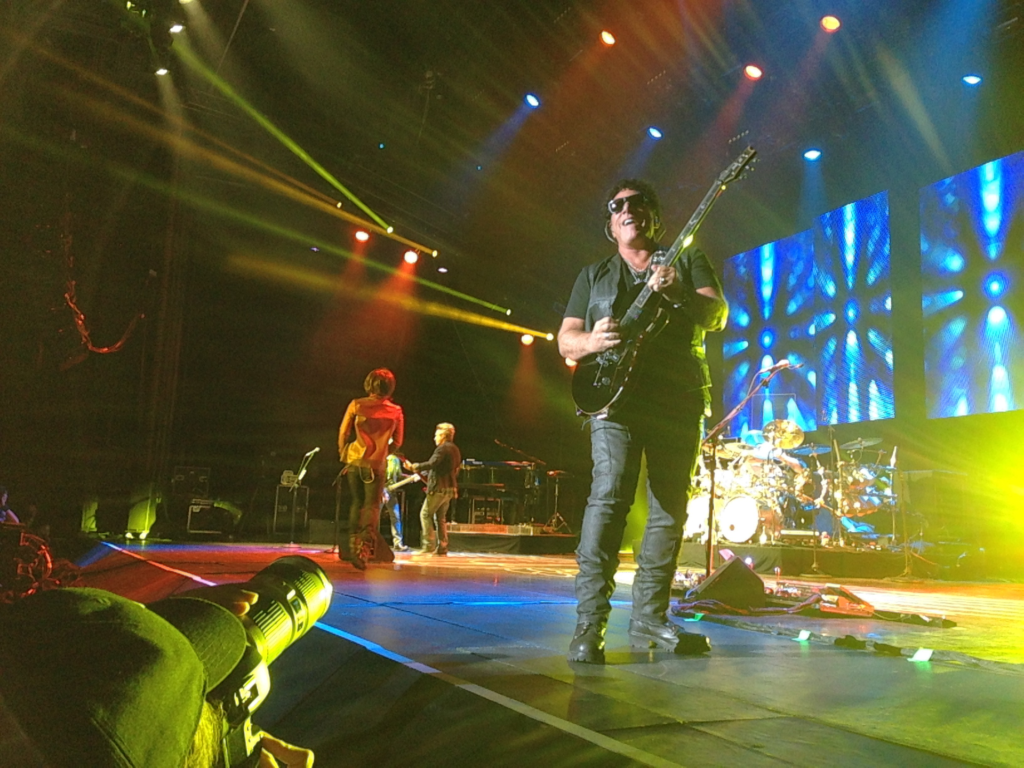 The second break came when Pineda handed over lead vocals to singing drummer Deen Castronovo for “Mother, Father,” from 1981’s Escape. Oddly, Castronovo also sounds a lot like Steve Perry. As the seventh song in the set, this was perfectly slotted for a beer run.

For the most part, the back half of the set was all killer, no filler. When the audience was told to get their lighters out during “Lights,” a sea of iPhone flashlights lit up the venue. It’s amazing how many people don’t carry lighters now. 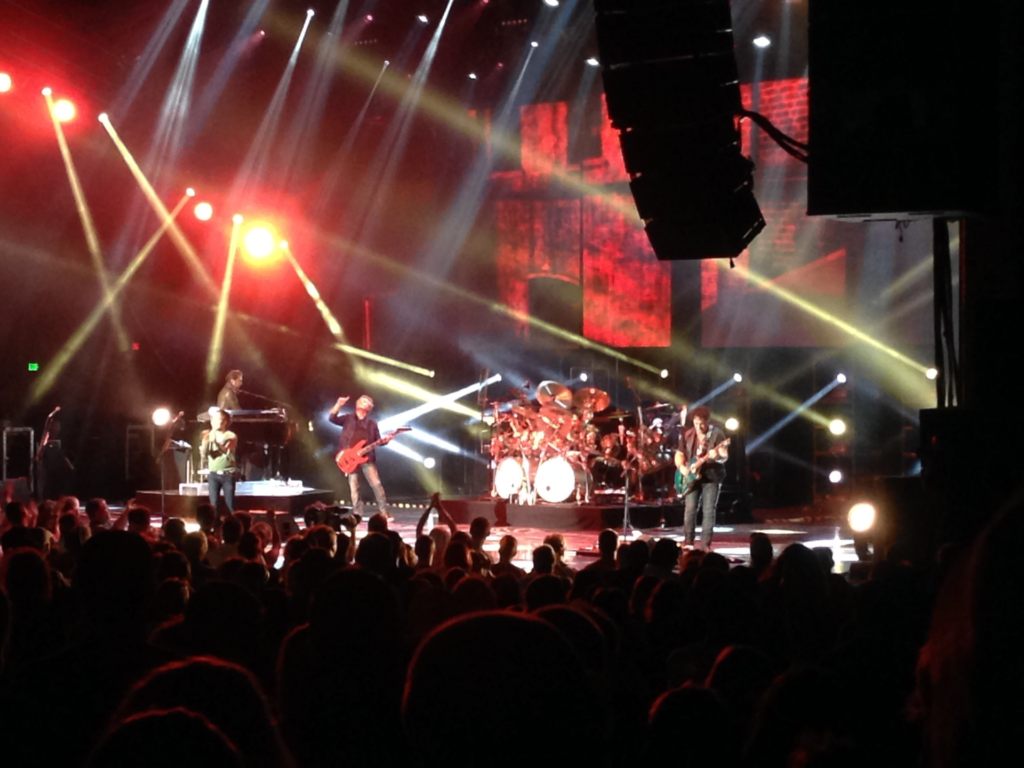 As soon as the close-up piano cam on the monster screens behind the band showed Jonathan Cain’s fingers starting in on “Don’t Stop Believin’,” the crowd went nuts. With Pineda’s final don’t stop, confetti showered Starlight.

Finally for the encore, Journey came back out for “Lovin’ Touchin’ Squeezin’” — and we all na-na-na-na-na’d into the night.

Earlier before sunset, Steve Miller took the stage with a tip of the hat. Wearing a charcoal suit with a black T-shirt, shades and fedora, we should all get to be so cool as Miller when we’re 70. 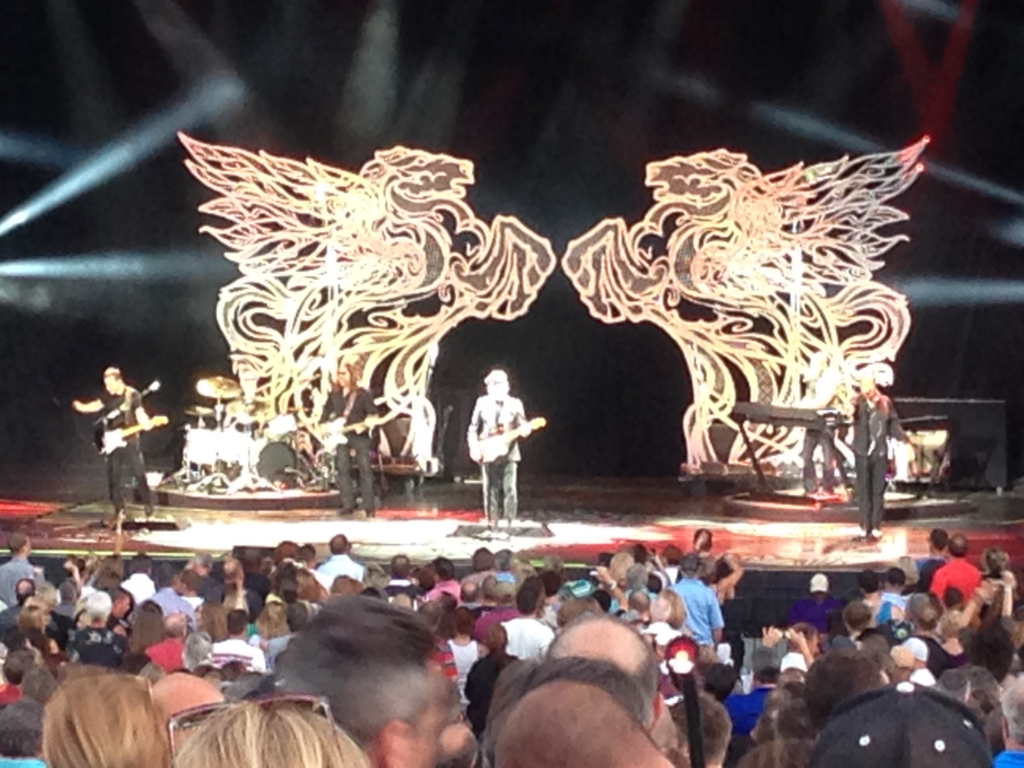 Standing in front of twin pegasusses (pegasi?), Miller opened with “Jungle Love” and took us though all the hits, finishing with a slightly meandering take on “Fly Like an Eagle.” In between he played a few solo numbers acoustic, after which the band came back for “The Joker,” each member donning the white and green mask from that album jacket. From a distance, the masks made it look like the Steve Miller Band had been replaced by five nicely dressed Wes Borlands. During “Rock’n Me,” they brought out giant balloons for the audience to bat around.

But we all know what the Steve Miller Band sounds like. Let’s talk about backup singer and dancer Sonny Charles.

Watching him move was like watching somebody play a Steve Miller Band edition of Dance Dance Revolution. Charles never stopped dancing, using his expressive hands to show how hot and high the burning flame full of desire runs in “Abracadabra,” and giving a great big morning stretch to wake up and look around in “Serenade.”

At one point during “Shu Ba Da Du Ma Ma Ma Ma,” it looked like Charles was doing a slo-mo Safety Dance. He could easily give the skanker from the Mighty Mighty Bosstones a run for his money. 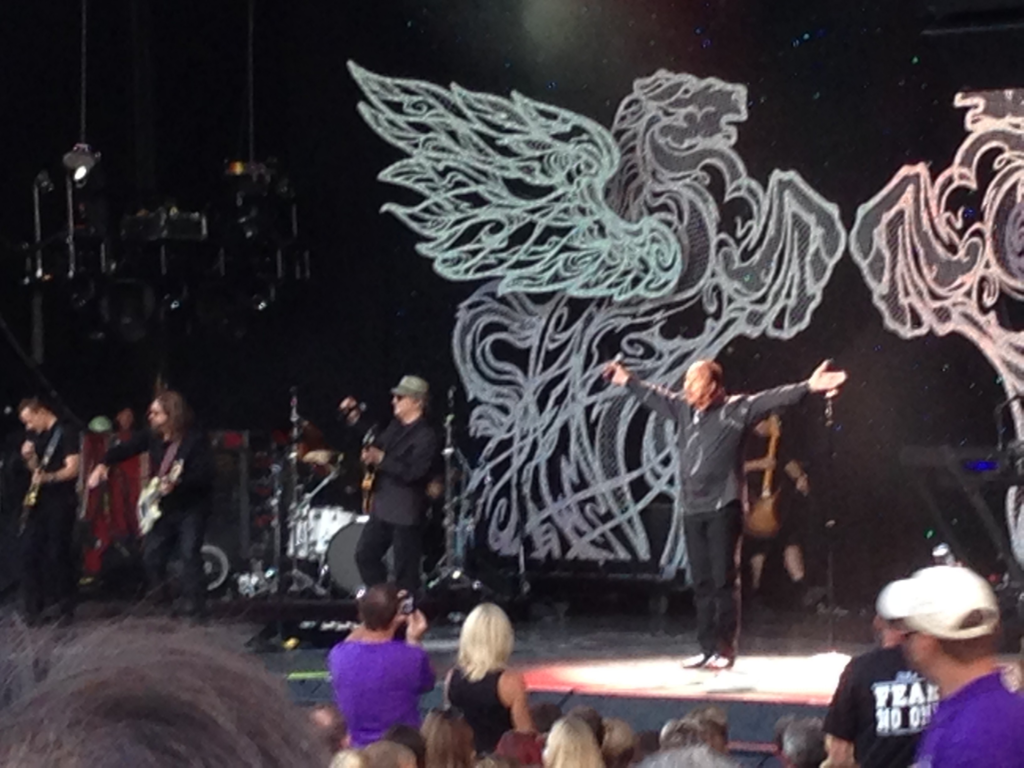 Taking the lead to sing “Ooh Poo Pah Doo,” the 73-year-old former frontman of Indiana soul group Checkmates, Ltd. even did the impossible — he got audience members to genuinely sing and dance along with a song they’d likely never heard. Charles would point and smile at them, and you just don’t want to let this guy down.

Attention Journey: If Pinneda ever quits, maybe try something new and give Charles a shot.

Leftovers: Tower of Power, the night’s first band, introduced one of their songs asking, “Who’s a new fan? We’re about to give you a ‘Soul Vaccination.’” Which is great for me because now I can cancel that doctor appointment.

The retro Miller Lite cans really added to the vibe of the evening. If only they were pull tabs.

And the Awesome T-shirt of the Night Award goes to the one that simply read, “I like Journey asshole.”

Journey’s Set list:
Be Good to Yourself
Separate Ways (Worlds Apart)
Any Way You Want It
Only the Young
The Star-Spangled Banner (extremely patriotic cover performed by Neal Schon)
Stone in Love
Mother, Father (Deen Castronovo on lead vocals)
She’s a Mystery
Lights
A Piano Break with Jonathan Cain
Open Arms
[? – If you know what it was, please leave a comment]
Ritual
A Guitar Break with Neal Schon
Wheel in the Sky
Faithfully
Don’t Stop Believin’
—
Lovin’ Touchin’ Squeezin’