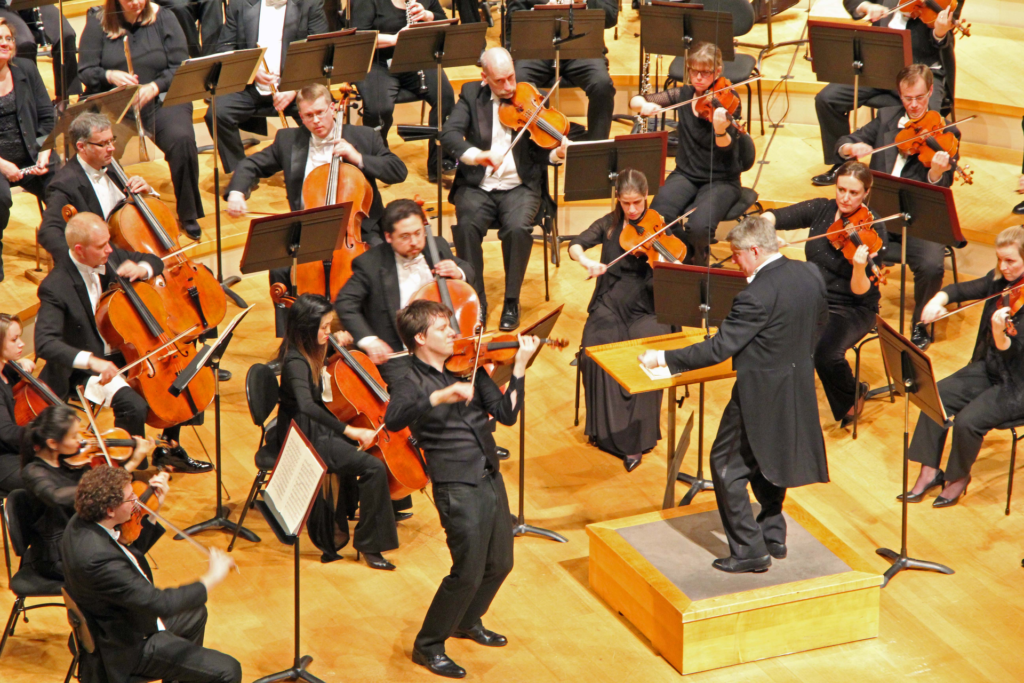 Joshua Bell took the stage in Helzberg Hall on Friday with little fanfare or even an introduction (not that there was a single person in the building who wouldn’t recognize him), but in his relatively brief 35-ish minutes onstage, Bell clearly demonstrated why he is considered one of the world’s most deeply talented and prodigious masters of the violin. 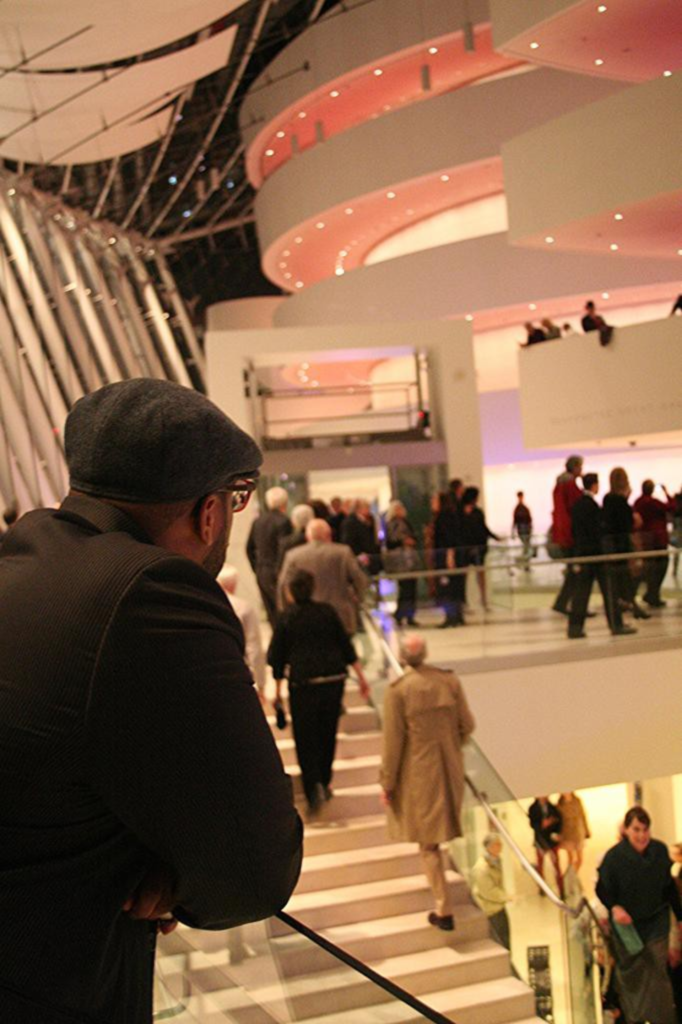 The evening’s program began with a performance of composer Adam Schoenberg’s American Symphony, a piece commissioned by KC Symphony director Michael Stern. The piece, inspired, according to Schoenberg, by the 2008 presidential election, had a cinematic quality to it, as it moved quickly through its five movements, from a bright fanfare in the first movement to a sense of eeriness in the second. The bright brass and strings vanished, and the mood changed entirely – the violin section hovered lightly and quietly on a handful of long, discordant notes, and when one of the percussionists began to lightly strike chimes, it felt like an ominous wind was blowing into the hall. The third movement featured quick, technical percussion, which built over the fourth and fifth movements to a very quick, bright and distinctively modern American-sounding rondo, complete with clacking of mallets on wooden blocks. The piece was warmly received by the symphony audience.

But then Bell emerged with no formal introduction – just to the applause of the crowd. He raised his lovely, extraordinary instrument, and bent his body nearly in half as he began to play. 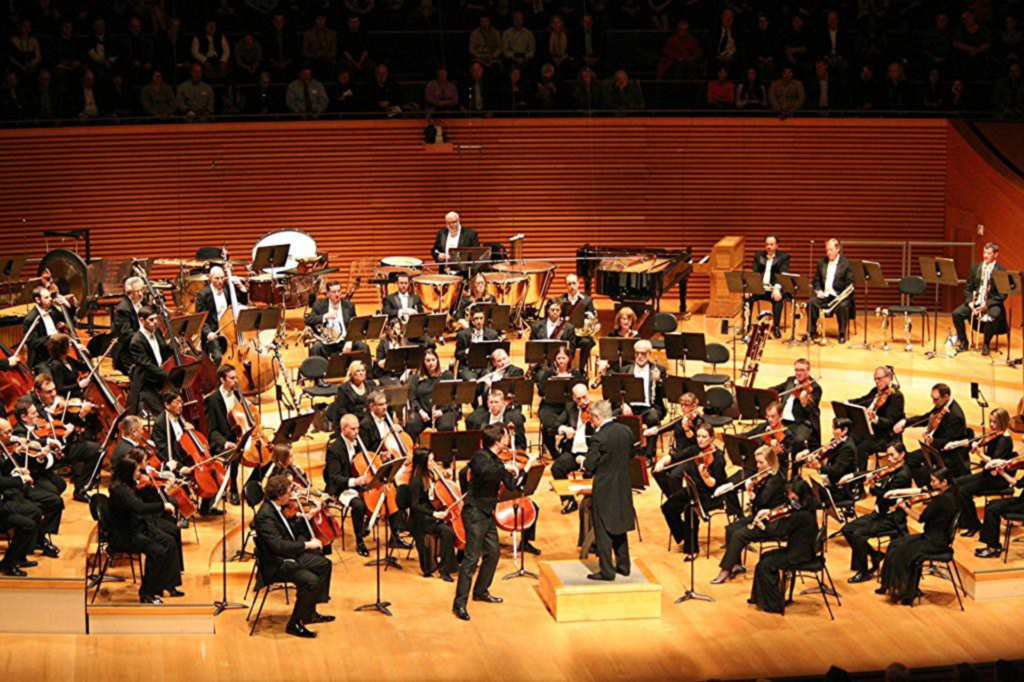 Just a few measures in to Lalo’s complex violin concerto Symphonie Espagnole, it became obvious why Bell is considered to be one of the world’s finest. He essentially is conducting the piece with his body (and his floppy hair), and the result was an interesting interpretive dance next to his friend, Michael Stern.

The Lalo piece was written for a 19th-century master, Pablo de Sarasate, and is perfect as a generational hand-me-down to someone like Bell: It is showy, fast, highly expressive, and requires the violinist be able to use every millimeter of his instrument. Bell occasionally smiles as his fingers fan across the strings and as he moves his body, nearly all the while gazing down upon the famous Stradivarius as if it were a third limb. 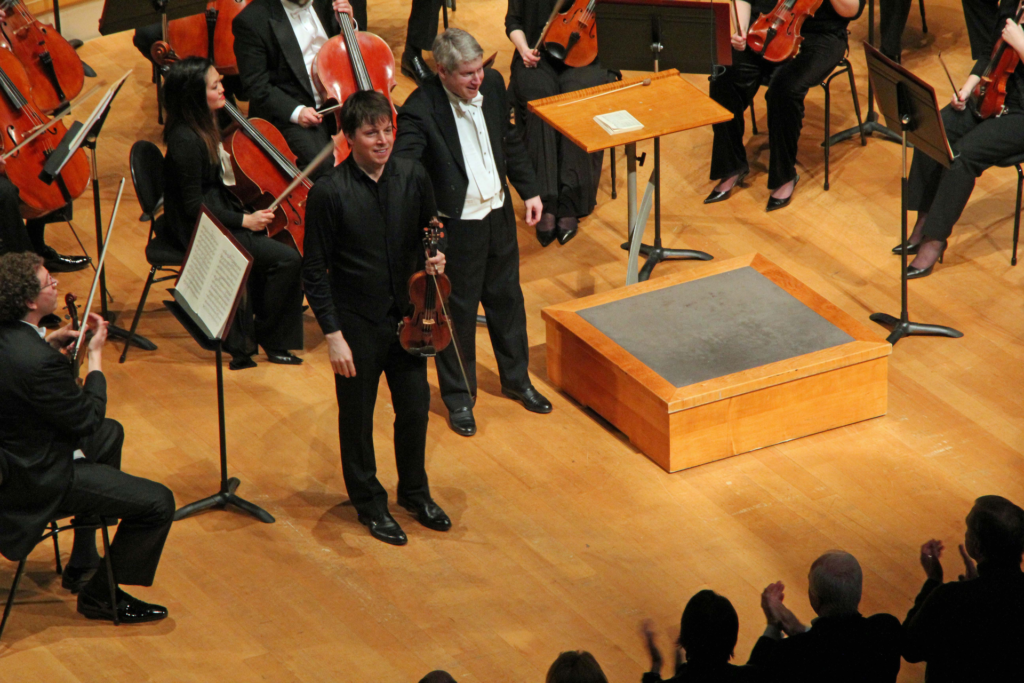 The piece features a number of opportunities for Bell to showcase his talents – the crescendos are intense and romantic, and particularly in the final rondo section, the piece calls for a series of elaborate trills, which Bell performed profoundly, yet seemingly effortlessly. As the piece was drawing to a close, and the notes just kept coming faster and with more intensity, I recalled that Bell could play this piece at a high level when he was just 11 years old. ELEVEN. It’s like being able to play in the NBA at 15. It was fantastically impressive.

The symphony had the difficult task of following up on Bell’s performance with one more piece after intermission. And I suppose if you are to follow up on near perfection, at least you can choose a deep, dark piece: Bartók’s Concerto for Orchestra. This piece was written during the darkest period of Bartók’s life, during a deep depression and illness that he entered after leaving his native Hungary for the United States during World War II. Especially considering the timing of the composition of the piece, the tension within it is obvious, particularly in the second movement, which features alternating duets between different sets of instruments, and the slightly flat, occasionally inharmonious sets of notes, which heighten the dark feeling created in the listener. It was a fitting end to an evening full of rich, vast talent, highlighted by brief but high-quality time with one of the most talented musical artists working anywhere.