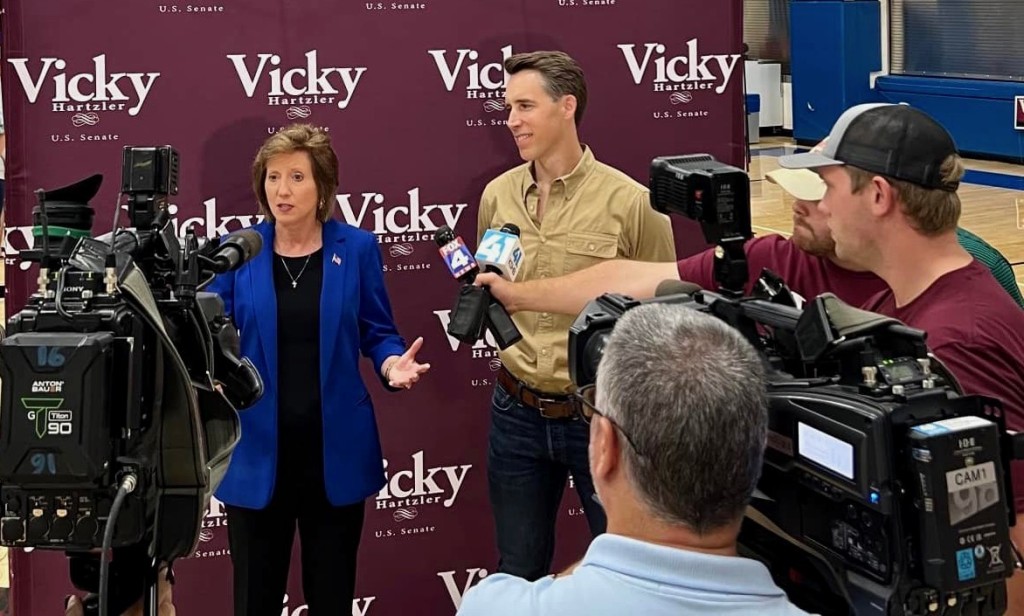 In late January, a GOP strategist named Kyle Plotkin bragged on Twitter about how popular U.S. Sen. Josh Hawley was in Missouri and how valuable his endorsement would be in the state’s upcoming Republican U.S. Senate primary.

Plotkin, who had previously been Hawley’s Senate chief of staff but had transitioned to working for his campaign,used a series of six tweets to report the results of a poll that cost Hawley’s campaign $99,745.

At the time of the poll, OnMessage Strategies was also working for Hartzler’s campaign and through early July, was paid $155,759 for its help.

The poll showed, Plotkin wrote, that Hawley was “the most popular MO elected official among GOPers” and well-liked generally by voters, with a net eight percentage point approval rating.

“And the dessert for the Missouri Senate primary race watchers,” Plotkin wrote. “If (Hawley) were to endorse in the primary, it would have a significant impact for the chosen candidate.”

And the dessert for the Missouri Senate primary race watchers.

If @hawleymo were to endorse in the primary, it would have a significant impact for the chosen candidate. This endorsement effect by an elected official is also rare pic.twitter.com/vxMdCADSbJ

Hawley was popular enough that 54% of Republicans said they were somewhat or much more likely to support the candidate he endorsed, the poll found.

On Tuesday, she received 22% of the statewide vote. She won only in 21 counties where she has been on the ballot for the past decade as an incumbent Congresswoman and ran fourth in several southwest Missouri counties, behind former Gov. Eric Greitens and U.S. Rep. Billy Long as well as the winner, Attorney General Eric Schmitt.

A lot of things didn’t break Hartzler’s way in the race. Schmitt had well-funded super PACs behind him and by the time voters went to the polls, $20.3 million of the $36.2 million reported so far for the GOP primary was spent to get Schmitt elected.

To counter it, Hartzler spent $3.1 million from her campaign fund and a super PAC, Secure our Freedom, that spent $910,000 on her behalf.

Only two polls, one in March and one in late June, showed Hartzler tied or ahead of Schmitt and Greitens. And just about a week after that June poll, former President Donald Trump announced he opposed Hartzler, even though he had not endorsed any candidate at that time.

“I think President Trump’s comments against Vicky hurt her tremendously because they came at a time when voters are trying to decide who to vote for,” GOP consultant James Harris, who did not have a client in the primary, said Wednesday.

Hawley may be the most popular Missouri Republican, Harris said, but Trump is more popular.

“It meant that 30% of the Republican base, if not more, were no longer considering Vicky Hartzler as their Republican candidate,” Harris said of Trump’s anti-endorsement.

A Republican consultant who works on legislative races, Jonathan Ratliff, said he felt Hawley’s endorsement did little to help Hartzler.

“Clearly it had no impact,” Ratliff said. “What Congresswoman Hartzler was able to do, she did with her own team’s effort. It looks to me like it had no impact on the campaign at all.”

Hawley helped with fundraising, including a round of events in May that brought in $400,000. He cut an ad for Hartzler that began running on television in late June.

“I know Vicky’s character,” Hawley said in the ad. “Her strong moral compass, her guts. We need a senator who is not afraid.”

A month later – and less than two weeks before the primary – the House committee investigating the Jan. 6 insurrection showed video of Hawley running away from the Senate chamber as the mob approached, with audible laughter from the audience.

Hawley also had Trump’s ear, and discussed the race regularly with him, Politico reported in April. That didn’t stave off Trump’s anti-endorsement of Hartzler.

Some political observers said the endorsement of Schmitt by U.S. Sen. Ted Cruz of Texas meant more to voters than Hawley’s endorsement of Hartzler. That’s because Cruz visited Missouri during the final push to rally voters for Schmitt, including a well-attended event in vital St. Charles County. Schmitt won a majority in the county – almost 56% – and amassed a 17,500-vote margin over Hartzler, who ran third.

Hawley joined Hartzler in Platte City and Lee’s Summit on July 25 for a “Faith and Freedom Summit.” Hartzler considered the Kansas City region among her strongest areas, but on Tuesday ran far behind Schmitt in Kansas City and Jackson County.

Hawley’s effort could have been stronger, Harris said, but Schmitt’s campaign was a juggernaut.

It was a “top-shelf race” that built alliances, had good fundraising and a disciplined message, Harris said.

“That is why he took 45% of the vote yesterday,” Harris said.

Hawley’s campaign countered pushed back on the idea his endorsement was ineffective, saying he was courted by nearly every major candidate before he finally came out for Hartzler.

“Every candidate begged for Josh’s endorsement because he’s the most popular elected official in the state,” Plotkin said in a statement Wednesday to The Independent.