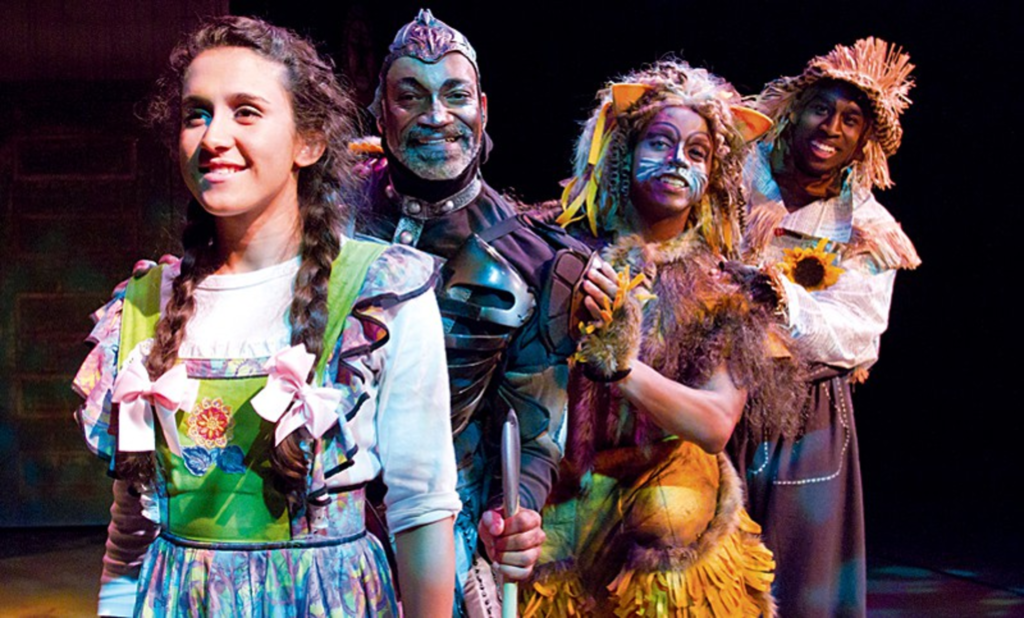 Life rarely comes this neatly wrapped, and a column perhaps less often still, but this week features two terrific large-cast musicals with a lot in common: Andrew Lloyd Webber’s Joseph and the Amazing Technicolor Dreamcoat (at the New Theatre Restaurant) and Charlie Smalls’ The Wiz (at the Coterie Theatre). Both are playfully imaginative reboots of well-known originals, both family-friendly and crowd-pleasing. Both boast Elvis characters and a broad general reach, as well as special interest to affinity groups (Jews, Christians, Mormons, African-Americans, children, scarecrow advocates).

First things first: In the beginning was a dysfunctional blended family fractured by parental favoritism, sibling rivalry and an annoying little brother with grandiose delusional disorder. And that brother was Joseph, whose father, Jacob, loved him more than his older brothers (Reuben, Simeon, Levi, Judah, Dan, Naphtali, Gad, Asher, Issachar, Zebulun and Benjamin), which made them jealous. So they did what any big bros might do: Sold the pipsqueak off to Ishmaelite slave traders — an improvement over Plan A, which was to leave him to die at the bottom of a well.

Joseph is played by the passably Hebraic-looking hunk Nick Cosgrove, who does a great young, bright and oblivious. His voice is just gorgeous. And he’s one of those dancers who not only is an extraordinary mover but also looks like he’s having a blast.

The title coat in the New Theatre’s splashy production is striped, but the music is a patchwork of get-down genres: calypso and country and klezmer. As songs go, the klezmer number “Those Canaan Days,” featuring Cathy Barnett as Head Wife, is one of the catchiest of the show. Barnett’s comic timing is impeccable, and she makes even a minor role specific and detailed.

Director Richard Carrothers has put the well-known Bible story into the Happy Machine, given it a dozen quick cranks, and turned out A Funny Thing Happened on the Way to the Pyramids. This is an over-the-top production, with stylishly cartoony sets (Scott Heineman), endlessly surprising and extensive lighting effects (Randy Winder), hilariously creative costumes (Mary Traylor) and the silliest possible props of biblical proportions (Paul Joseph Barnett, thinking 40-ounce Starbucks cups).

I would be remiss if I didn’t mention Todd DuBail’s Elvis-y Pharoah, who kills an already weakened house, as well as Jerry Jay Cranford’s vaudevillian Potiphar, who channels a deliciously smarmy charm. The showstoppers are the all-cast song-and-dance numbers, which attain dizzying heights of comic invention and razzle-dazzle entertainment, thanks to Richard J. Hinds’ witty choreography. It’s during the dances that the performers (made up primarily of the 11 renegade brothers, all of them A-1 hoofers) really cut loose and let their personalities play.

Toward the end of the performance I saw, the audience’s applause and repeated standing ovations got so rambunctious, the performers had to fight to finish the show. If that’s any indication, you’ll have to fight to get tickets.

What better place for The Wiz than here in tornado country? The Coterie’s Jeff Church has assembled one of the most gifted casts of the year, and there isn’t a single weak spot. The talent is so deep that even the likes of Jennie Greenberry, who stands out in everything she does, is simply one of a very strong ensemble.

The petite Emily Shackelford is adorable as Dorothy — bright-eyed, determined and charming, with a singing voice to treasure. She does a wonderful job of leading this production on her journey. Her companions are every bit as lovely: Tosin Morohunfola shows a flair for physical comedy as the boneless Scarecrow, Christopher Barksdale is a sweet Cowardly Lion, and Brad Shaw is the heart of the production as the heart-lacking Tin Man. (The multifaceted Shaw also designed and made the amazing costumes, which are works of art unto themselves.)

It’s great to see Nedra Dixon, who was so good in the Unicorn’s Ruined, in multiple roles here, including Glinda. Enjoli Gavin is droll and sassy as good witch Addaperle and bad witch Evillene. And Damron Armstrong is enjoyably charismatic as the Elvis-y Wiz.

Church has neither a big budget nor a big space, but he makes up for it with ingenious staging and visual effects (kudos to Ron Megee’s crow puppets), and he keeps the story brief enough and unscary enough for the youngest kids. The tornado and the narcotic poppies are freaky moments in the movie, and the flying monkeys remain the terrifying stuff of nightmares, but Church has transformed the cyclone and the flowers into fascinating dances (choreographed by Vanessa Severo) and the monkeys into friendly dudes. Throughout, the spirit is game and generous, with the ensemble pouring everything into the audience. This Wiz transports us to wonderland and then gently returns us home.