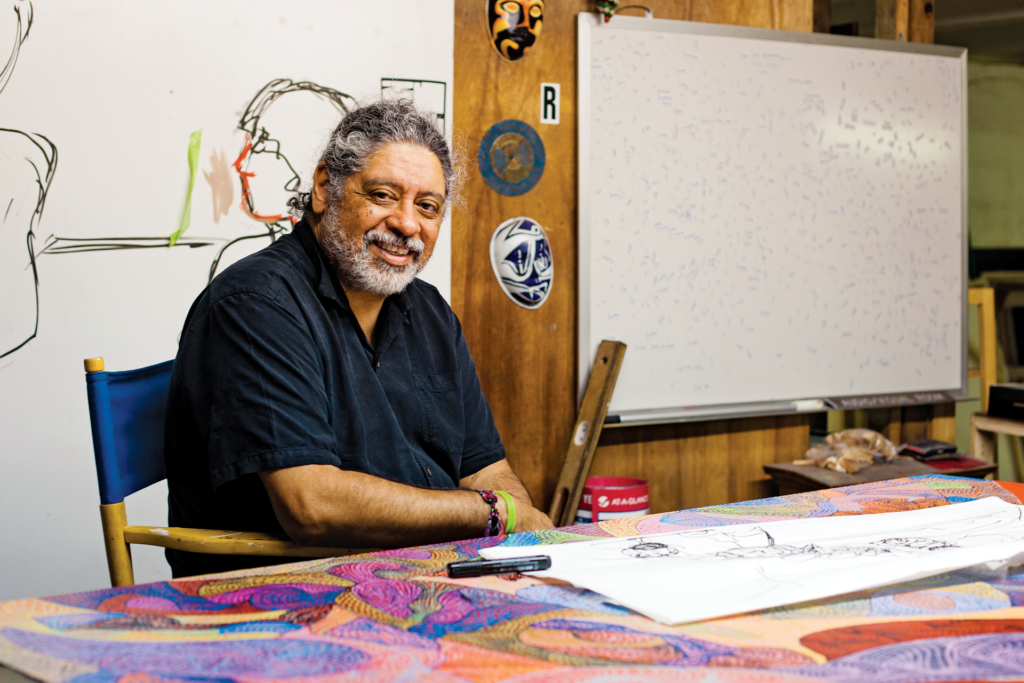 “There is this great thing that happens when people come to see the mural. People are driving by and they get such joy that people are coming to see something there.” This is how the artist and muralist José Faus sums up the relationship between the vibrant, expansive artworks that adorn many of downtown Kansas City, Kansas’ old brick buildings, and the citizens and visitors whose presence and history are reflected in them.

The murals tell stories to and about a community, and they appear thanks to the input and labor and art direction of residents who often are intimately familiar with those stories. One need not be a master painter or illustrator to participate in the making of a mural. Skill helps, but murals are about local history and perspective, the public and the personal. The images may change as they progress, absorbing different viewpoints and then applying them to public spaces. The resulting mural not only changes the look of its neighborhood but also showcases the pride of its residents — in the history on display, and their ownership of it.

I talked with Faus about the importance of public art and how communities are involved in the stories, history and processes that go into creating a mural.

The Pitch: How does a mural change the landscape of the community?

When we started painting the Argentine mural, the whole other side of the street facing the wall had become overgrown. Two weeks in, we started painting this mural. We heard this loud chainsaw and saw it poke a little hole through the bramble, and within a week the guy had cleared it out and said, “I want to see this mural. I want to see what you guys are doing.” By the time we got done, all the way down that strip, which was two blocks long, people had cleared it out, and we could see the houses. We could see people. It was a really beautiful experience.

We paint murals to celebrate and honor this community. It’s amazing when people discover one on a whim. I love the idea that you have something to celebrate, that celebrates your community, but also it’s accidentally there — you can find it on your own, marvel at it. It doesn’t matter who or what did it — it’s there. It enlightens community. It gives people a sense of pride. That is a positive. It’s not a panacea of all of the problems a community has, but it can become a place that empowers people to try to make sure that somebody gives a damn.

Do you have issues with people destroying the artwork with graffiti?

In marring it, they are usually not trying to destroy it. They are actually trying to incorporate what they do in it. In one instance, this kid put his stuff in a little box. You wouldn’t even have noticed it — they were blending it in. The tags were trying to emulate some of the things that these artists had done. They were trying to create. These kids were looking and learning.

How do you go about coordinating a mural and recruiting volunteers?

You never have an absence of people wanting to help. The schools realize that it’s a good tool to engage kids. There is always somebody that wants to be a part of it. For people who are thinking about doing it, there is a process, a business model. There are the technical aspects of the wall. But I’m always open to share information — it’s no secret. It’s a conversation about art, how they come to art, what art means to them and how they can focus. I’ll talk to anybody. Art will get you through times of no supplies better than supplies getting you through times with no art.

How would you like to see your legacy as a Kansas City, Kansas, muralist?

We did something here that people still value. Somebody had the idea to celebrate this community, so we did these murals. But it also says, yes, you can make a living in the arts. It also says it has a value beyond what you set out to do. Even if they are gone tomorrow, there are a lot of people who knew they were there. There are people who got joy out of it. There is a broader life that we have besides the weaknesses that we see in each other. We have rich lives. They are complex sometimes, and that is what the murals celebrate, and we celebrate a positive aspect of that, but we also address the negative things. 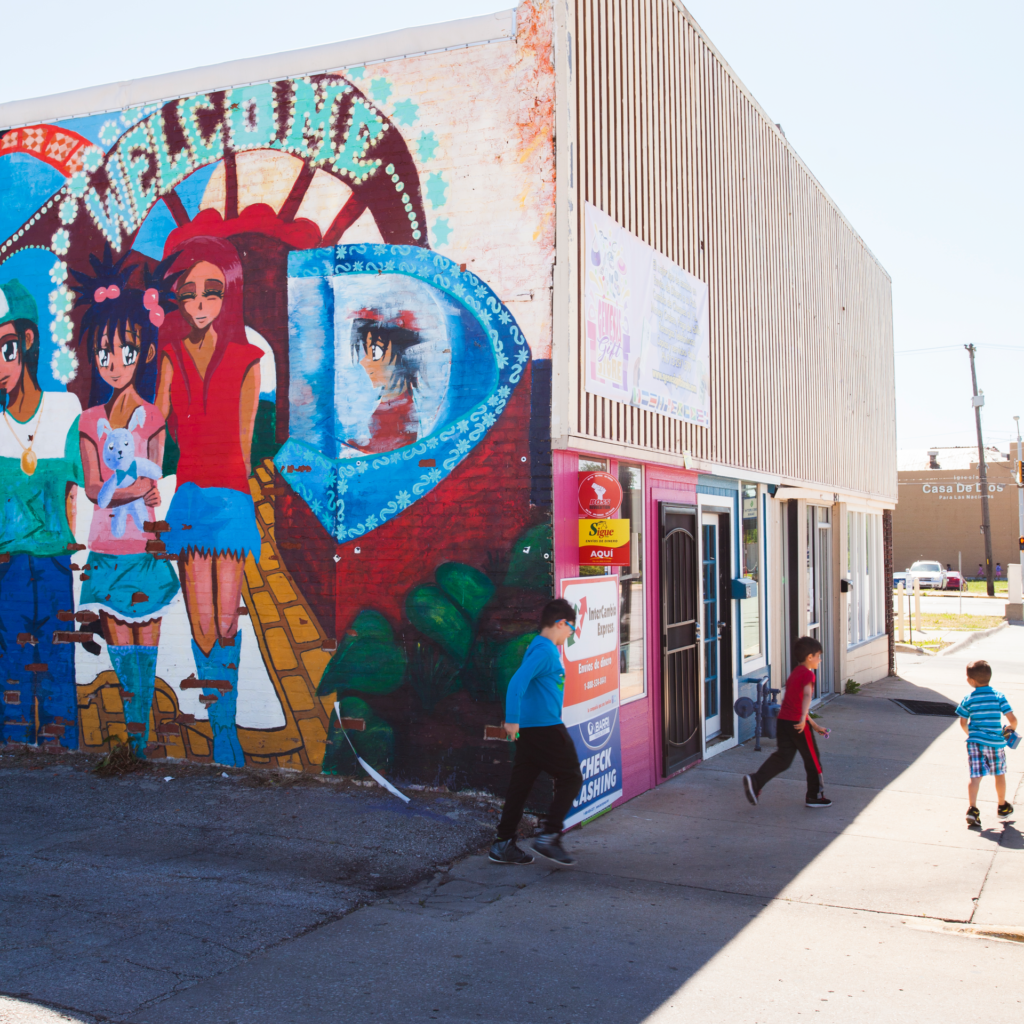 For this piece, funded by the Kauffmann Youth Advisory Board, children did 90 percent of the work, laboring four hours a day, five days a week for 10 weeks. The art direction was led by the kids’ ideas, centering on their perspective of the path of life (see: a circus roller coaster). 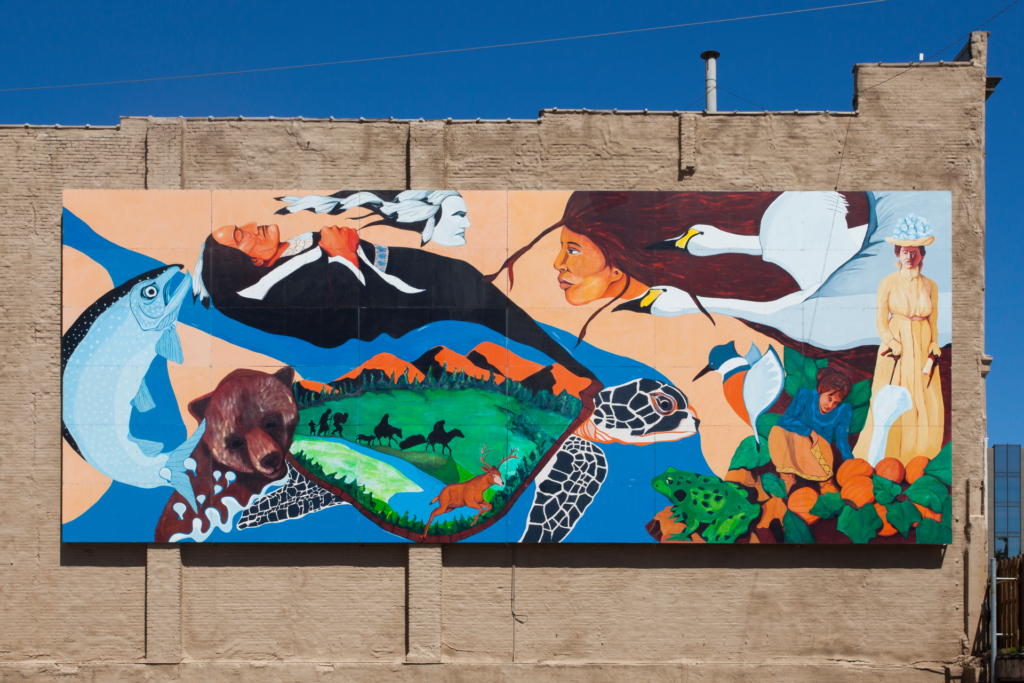 Originally painted flat on panels, the artwork here incorporates spiritual elements of American Indian culture, specifically the Huron, also known as the Wyandot people. Lyda Conley, a Wyandot-American lawyer, was instrumental in the legal preservation of the Huron Indian Cemetery in downtown KCK. 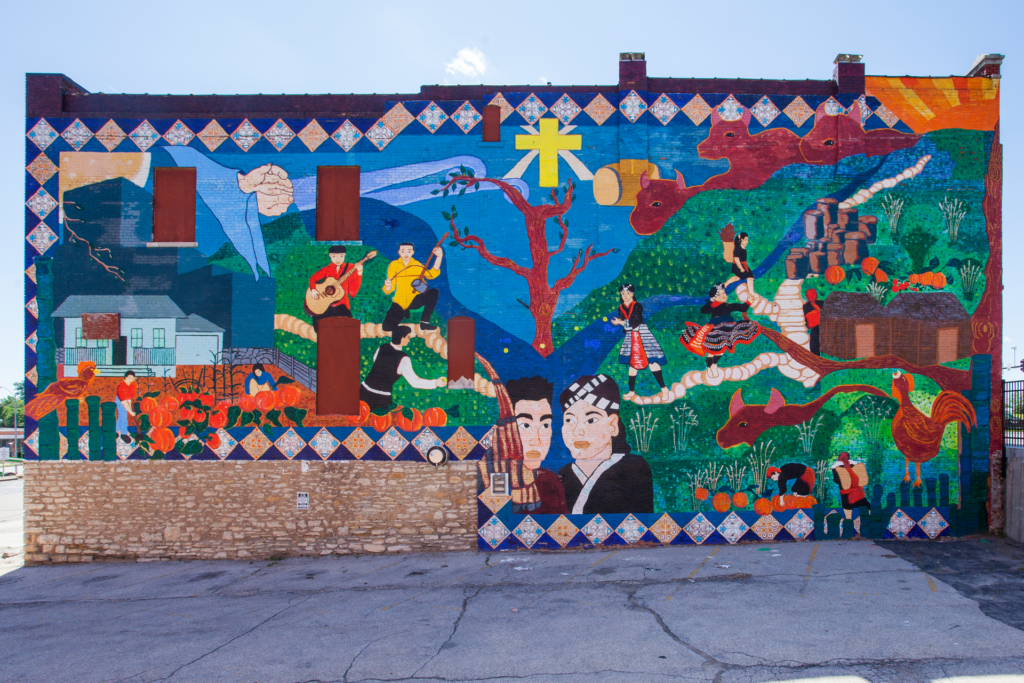 Visually narrates the history and culture of the Hmong, both traditional and contemporary. 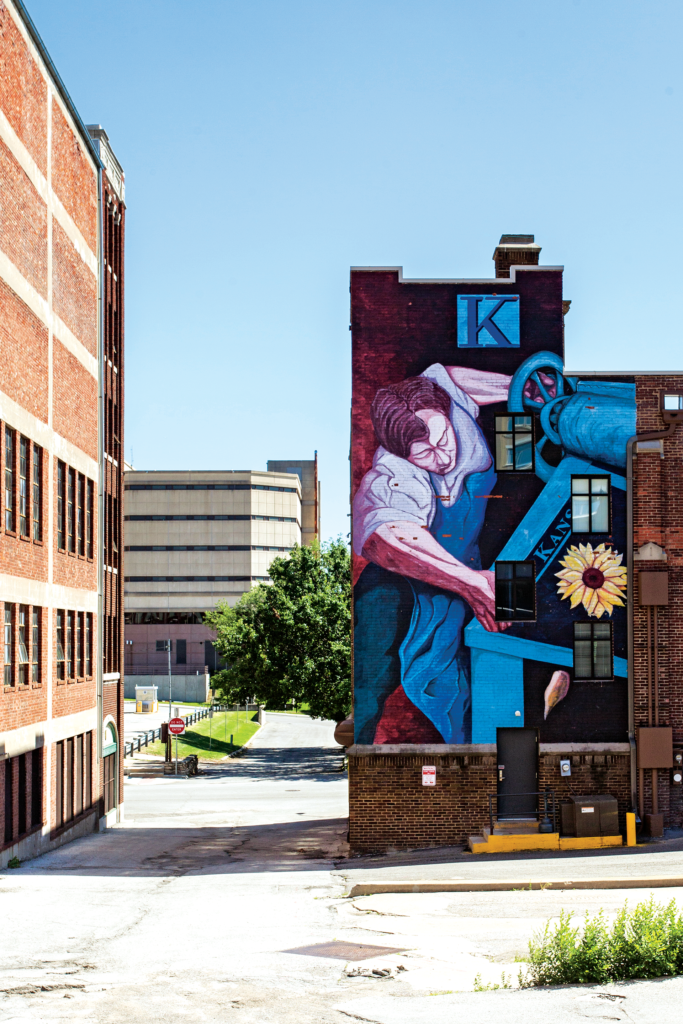 This building used to be the printing house of The Kansas City Kansan. The mural shows a press operator printing the final edition of the newspaper, which ceased publication in 2009. The sunflower is the Kansas state flower; the letter-pressed “K” imagery reflects the paper’s font. 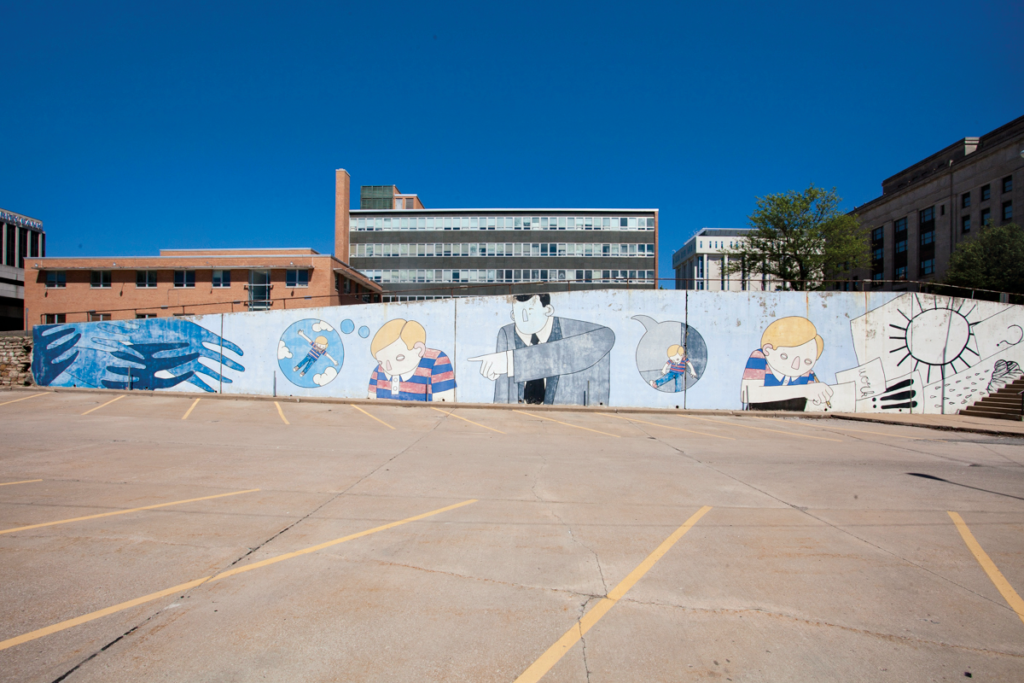 This parking-lot mural shows the fragile relationship between a father and a son and how communication between them can be misunderstood. 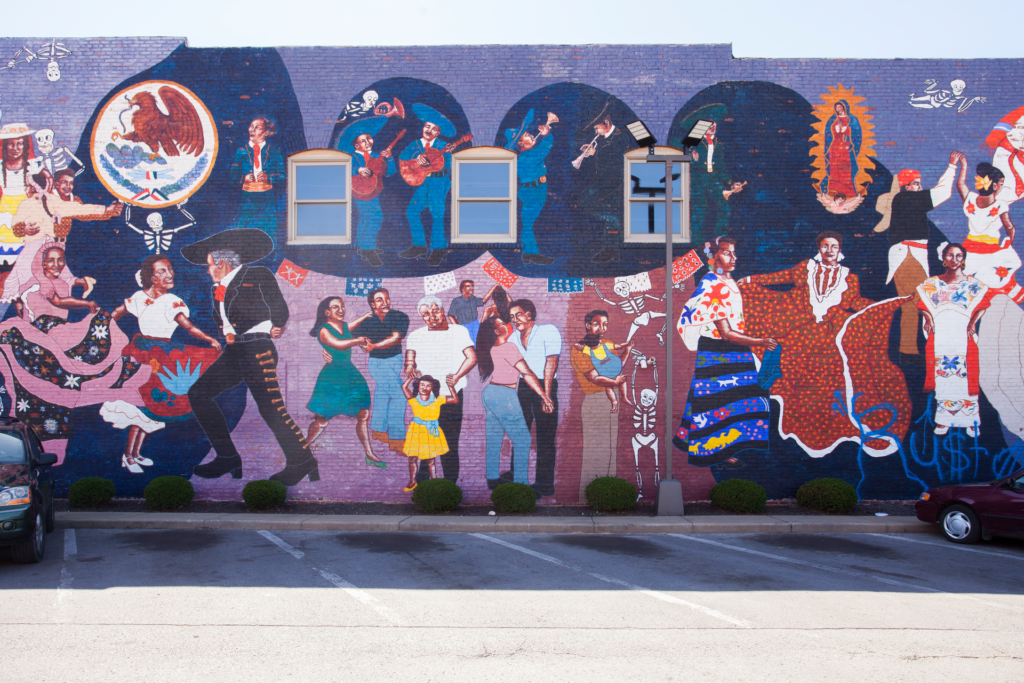 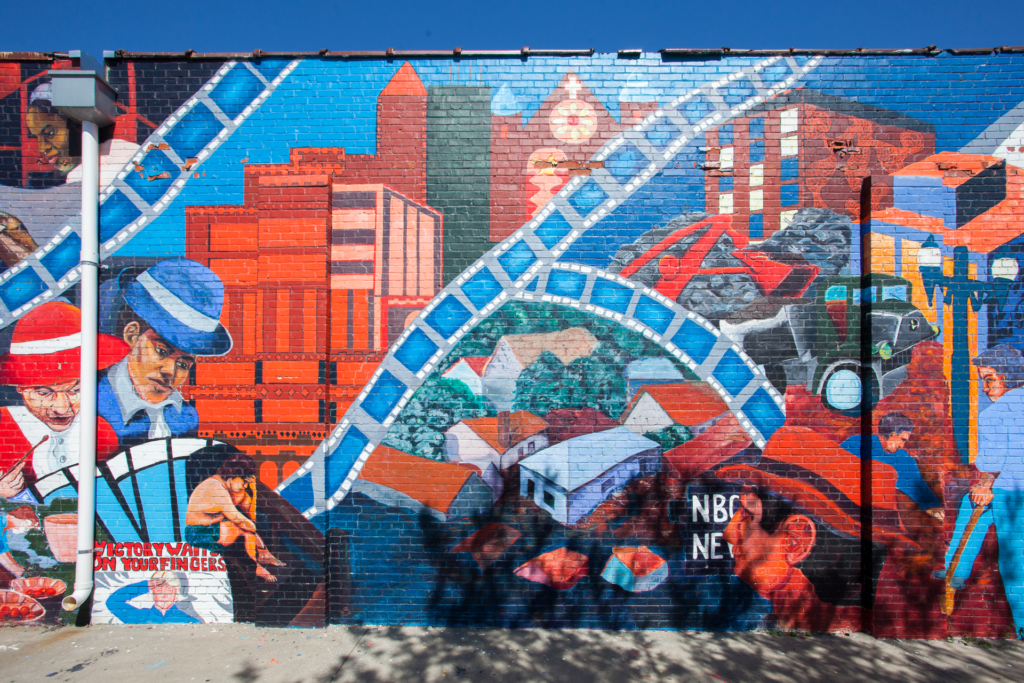 The camera film strewn throughout the mural represents the passage of time. The figures show a chronology of world events and their effect on minority groups. On display are depictions of industry, classism, racism, war and diversity. 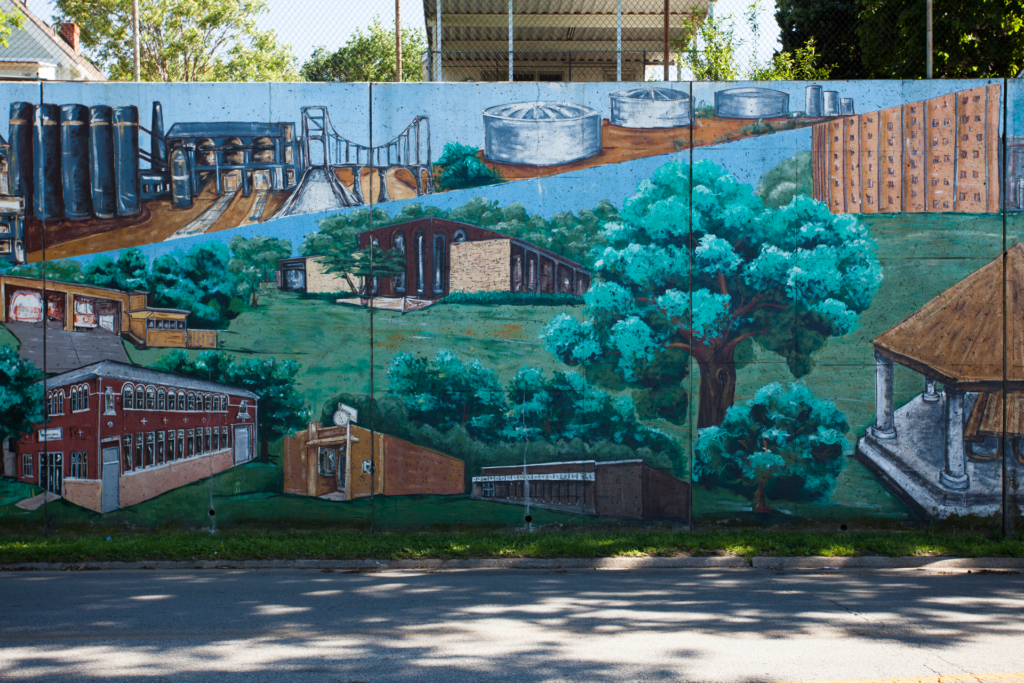 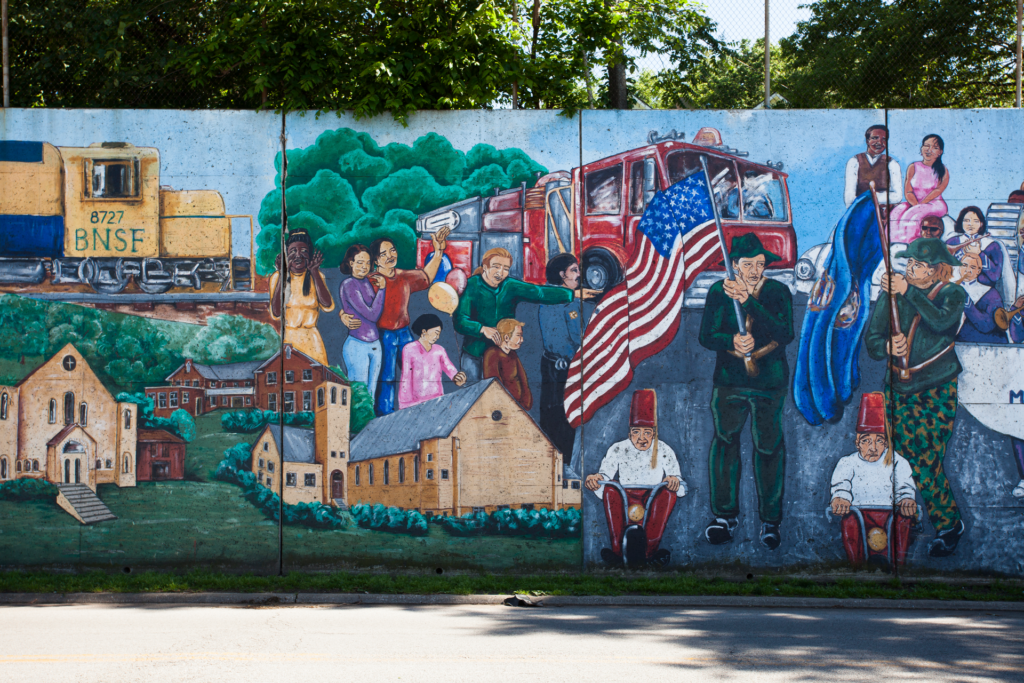 This expansive mural, which covers a 20-foot-tall, two-block-long wall, chronicles the histories, hardships and lifestyle of Argentine residents, Beginning with depictions of the Osage, Kansa and Wyandot American Indian tribes, the art continues with the rise of industrialization and the middle class and depictions of racism and classism, the influence of the railroad, the impact of the 1951 flood on the region, and the cultural diversity of the people who settled and now live in Argentine. 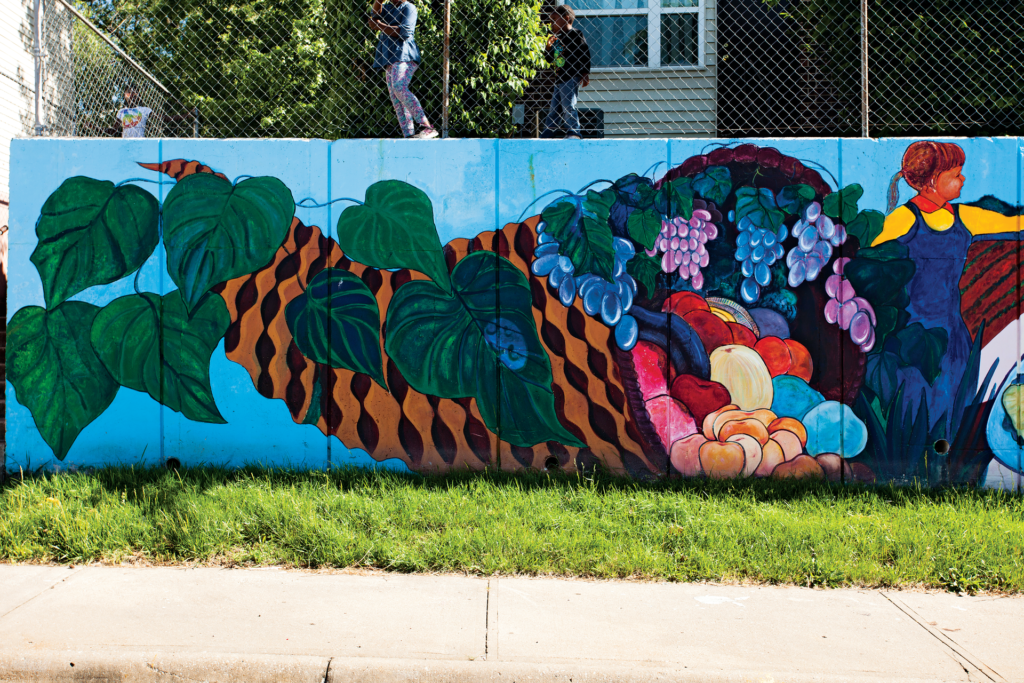 Summer, spring and fall are represented here, and the likenesses of local volunteer mural painters are shown. Hummingbirds, the harvest and the environment are also strong themes. 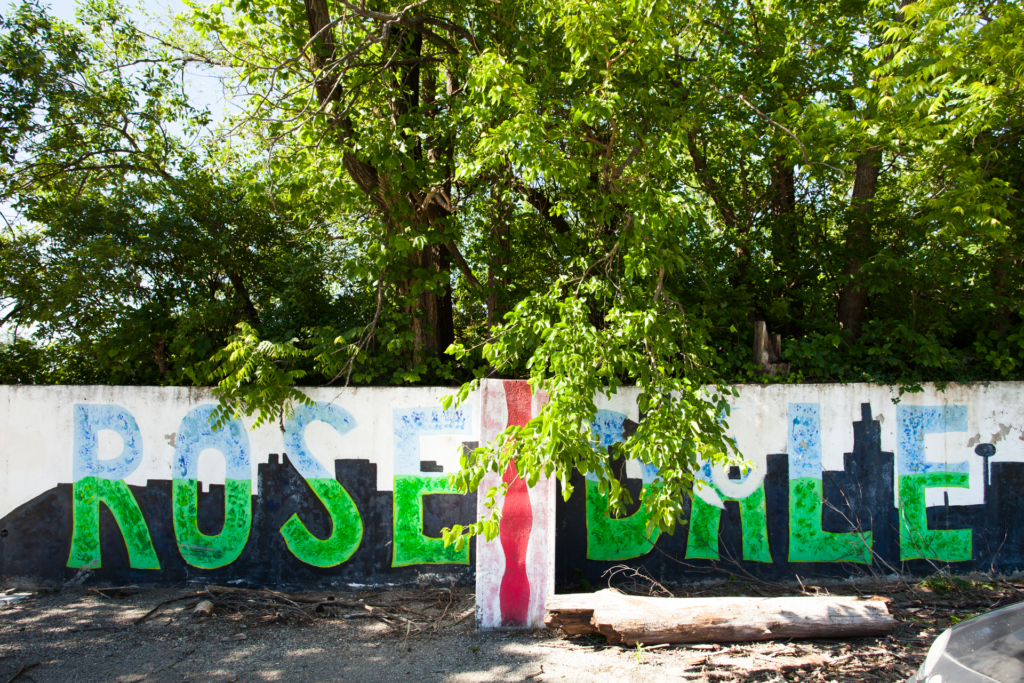 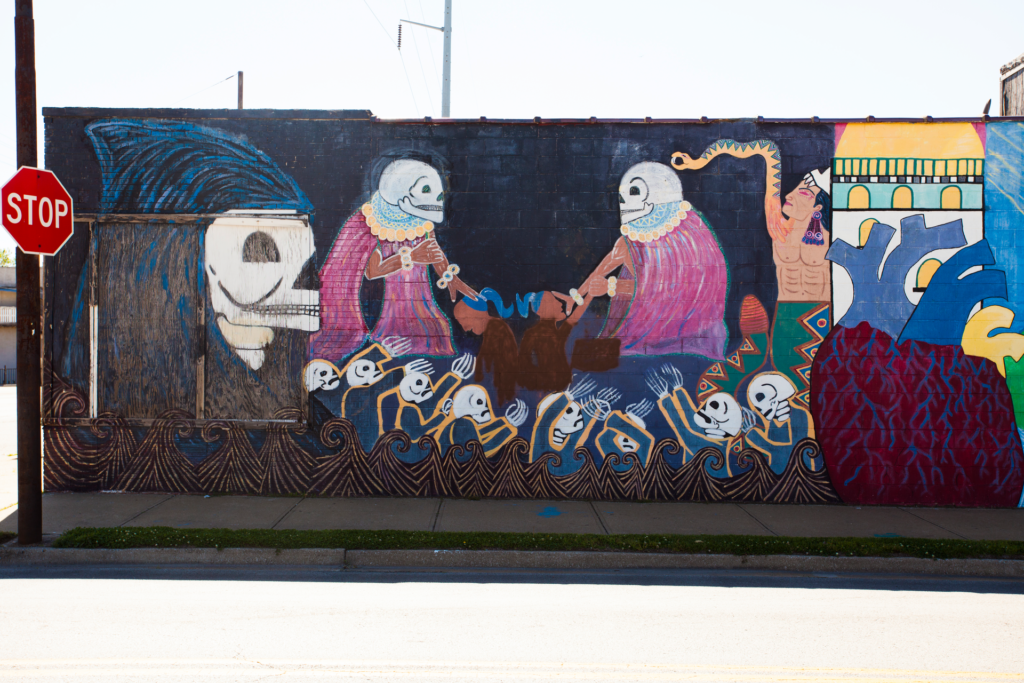 Directed by John Bonifacio Moreno, with Día de Muertos (Day of the Dead) themes throughout, this art shows a view of heart, family, faith and the notion that “Perdonar es Amar” (forgiveness is love). 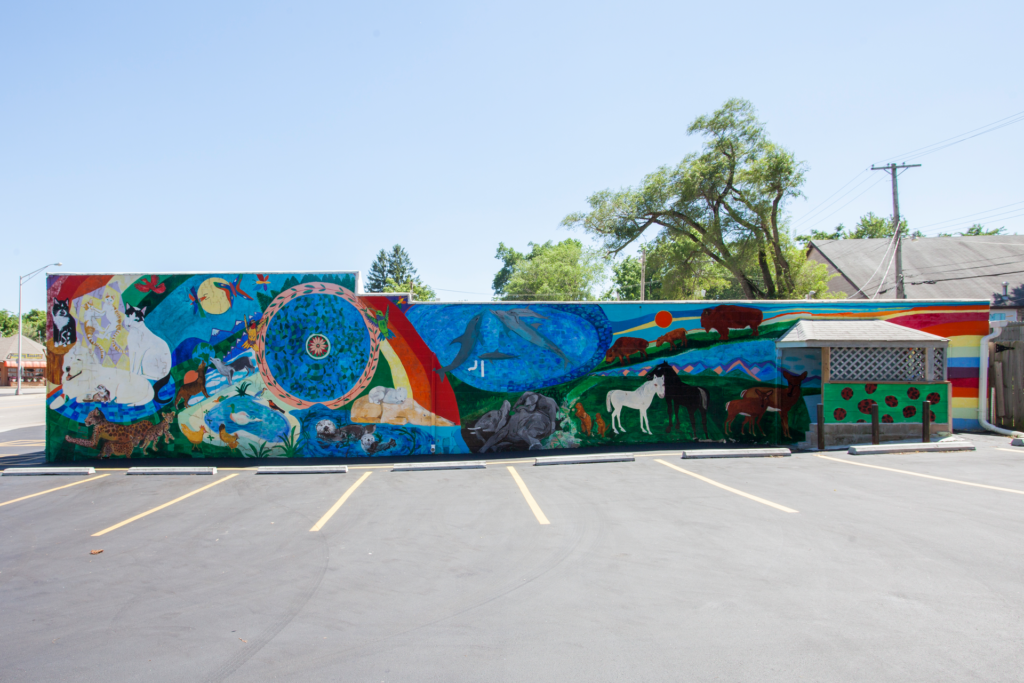 Maria Cocchiarelli Berger, who now co-manages the Museum of Friends in Walsenburg, Colorado, painted this mural featuring a variety of animals in their natural and domestic environments.

KCK has many other murals, but this list makes a good tour of vital pieces, particularly in the Rosedale, Argentine and Armourdale neighborhoods. All addresses are in or around downtown Kansas City, Kansas. (Also, the regionally produced film Called to Walls highlights local muralists and musicians; see calledtowalls.com.)