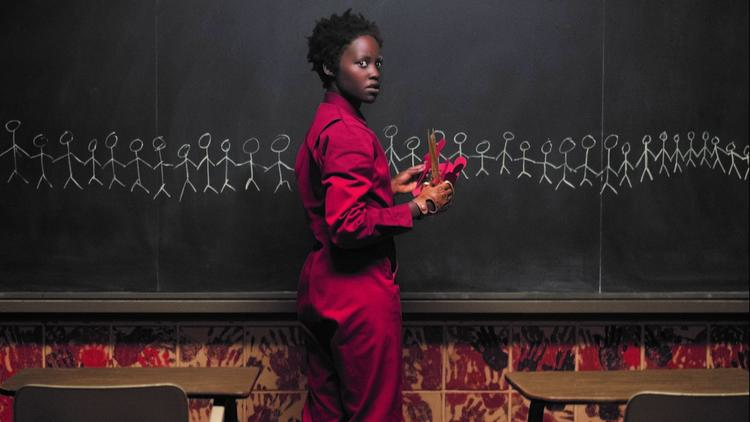 You know that holding-hands decal people put on the back of their car that’s supposed to represent their own nuclear family? The Wilsons have one of those. Gabe (Winston Duke) is this decade’s Clark Griswold, cheerily vacationing with his wife Adelaide (Lupita Nyong’o), daughter Zora (Shahadi Wright Joseph), and younger son Jason (Evan Alex) at their summer home in Santa Cruz.

But this iconic symbol of American suburbia becomes a nightmare one night when the power suddenly goes out and the Wilsons are menaced by their own doppelgangers: four creepers, bathed in shadows, standing totally still, armed with scissors, clad in red jumpsuits — and holding hands.

This is Us is writer-director Jordan Peele’s follow-up to the unexpected monster hit (and Best Original Screenplay Oscar winner) Get Out, and it establishes that Peele is not a flash-in-the-pan filmmaker, but rather one who is full of serious ideas (maybe a few too many here) and has a firm grasp of both satire and suspense filmmaking. I don’t want to jinx him, but Peele is exhibiting all the suspense and thematic chops we saw in early M. Night Shyamalan films, and none of the self-important tendencies. Plus, a welcome dash of humor, God bless it.

There are lots of slyly dark and comedic moments in Us, for sure, even if they don’t all land in that uncomfortably so-true-it-hurts sweet spot as much as the ones in Get Out did. The last comparison to Shyamalan I’ll make (besides the fact that he had two good films, too) is that, like MNS,  Peele successfully reframes the story in both of his films, making you want to watch them all over again.

Us starts as a home-invasion horror thriller but moves on from there, borrowing what it needs from both slasher and zombie flicks, and never faltering in its confidence. Cinematographer Mike Gioulakis (who lensed another suburban allegory thriller, the exemplary It Follows) keeps the frame full of details, and his fluent Steadicam work always keeps you guessing about what lies just outside what we’re allowed to see. Little Jason is wearing a Jaws t-shirt throughout Us, and it’s more than a hollow reference. It’s clear that Peele has been studying Spielberg. He not only achieves a similar kind of suspense by showing less, but also conjures up that E.T. feeling that the Wilsons are every modern family, and that their experiences are reflective of ours. The film’s near-perfect prologue, set in 1986, further ups the Spielberg feels.

Although Peele has said specifically that Us was inspired partly by “Mirror Image,” a 1960 episode of The Twilight Zone (a show he is now reviving as host and producer), it actually has the feel of a 1950s revenge-centered EC Comics story, crossed with a 1970s paranoid thriller like Invasion of the Body Snatchers. And as you might expect with a horror film about dopplegangers: the terror lies within, we are our own worst enemies, etc. But Peele’s allegory goes beyond that into a fable about crippling self-doubt and class struggles. I said he had a lot of ideas.

Peele also stocks Us with visual motifs and thematic elements revisited throughout the film. Sometimes they’re done in all-too-obvious ways, but even then, they’re at least done to very creepy effect. To its detriment, Us telegraphs too much, but I also understand Peele’s inclination to make a mainstream horror satire and not an art film. Us should be seen and experienced in a crowded theater full of people who are turning away from the screen as much as they are glued to it. To that end, Peele is a smart filmmaker, and he loves subverting audience expectations and pulling subtle role-reversals.

Actingwise: Winston Duke showcases a whole different side of himself in Us than he did as the hulking M’Baku in last year’s Black Panther; he’s also a natural comic actor. But the movie belongs to Duke’s Black Panther co-star Lupita Nyong’o, who not only plays a lead character with deep scars, but also conjures up Red, one of the most terrifying onscreen presences in a long while. Her jittery physicality, piercing eyes, and scratchy voice will no doubt live on in nightmares and Halloween costumes for many years to come.

With Us, Jordan Peele has once again amplified iconic American suburbanism and turned it loose on itself in violent ways. Although it’s not without its own excesses, this confident sophomore film is a chilling, sometimes sickly funny journey into the American psyche, using our own feelings of inadequacy and unease in the world against us.