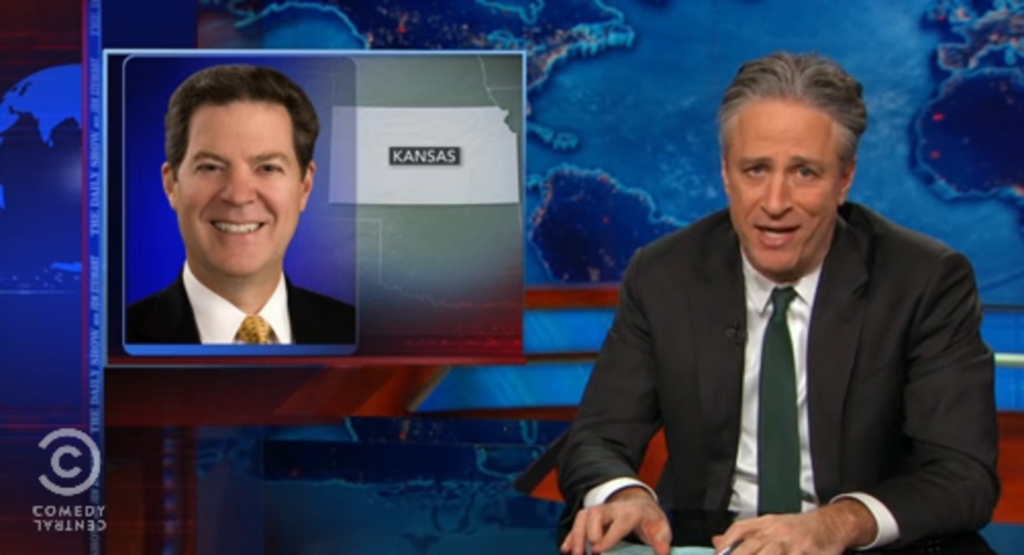 Whenever Jon Stewart leaves The Daily Show later this year, he may take a moment to thank the state of Kansas for filling so much air time over the years.

Kansas is a wonderful place in many respects, but the actions of its elected leaders make ample fodder for The Daily Show’s writers.

Just late last year, Daily Show correspondent Jessica Williams filmed a segment in Lawrence that poked fun at the aftereffects of Gov. Sam Brownback’s ruinous tax cuts. The spot ended with Williams dressed like Dorothy from The Wizard of Oz.

That ending alone, the reaffirmation of a tiresome Kansas cliché on a popular cable television show, should make Kansans cringe.

Then again, it’s hard to shed old stereotypes when state leaders are so bent on making Kansas seem more like the place it was in 1939, the year that Frank Baum’s novel was put on the silver screen, than a functional 21st-century state.

An Oz reference made its way back into Stewart’s repertoire Wednesday evening when he took Brownback to task for peeling back a 2007 executive order that added sexual orientation and gender identity to the list of protected classes for state employees .

“It being Kansas, I guess Brownback clicked his heels three times and said, ‘There’s no place like homophobia,'” Stewart deadpanned.

During a time when courts all across the country are affirming gay rights in one respect or another, Kansas keeps company with Alabama (also lampooned during Wednesday night’s show) by taking a step back in time by clinging to second-class citizenship for its LGBT residents.

True, federal law does not classify LGBT as a protected class, but that doesn’t mean Kansas or other states cannot do so on their own volition. Nor does doing so create “special rights” for LGBT workers. It’s merely protecting them from getting fired because of the way they are.

Of course, not all state institutions want to follow Brownback’s lead. The University of Kansas on Wednesday said Brownback’s edict would have no effect on its employees, faculty or students and that its non-discrimination policy, which includes sexual orientation and gender identity, still stands.

Kansas City Mayor Sly James seemed to respond to Brownback’s maneuver earlier this week, taking to social media to proclaim that KCMO welcomes the LGBT community. A column in The Kansas City Star insisted that James’ embrace of progress would help KCMO win jobs from Kansas, which is probably true but misses the larger point.

This is about civil rights and human dignity.