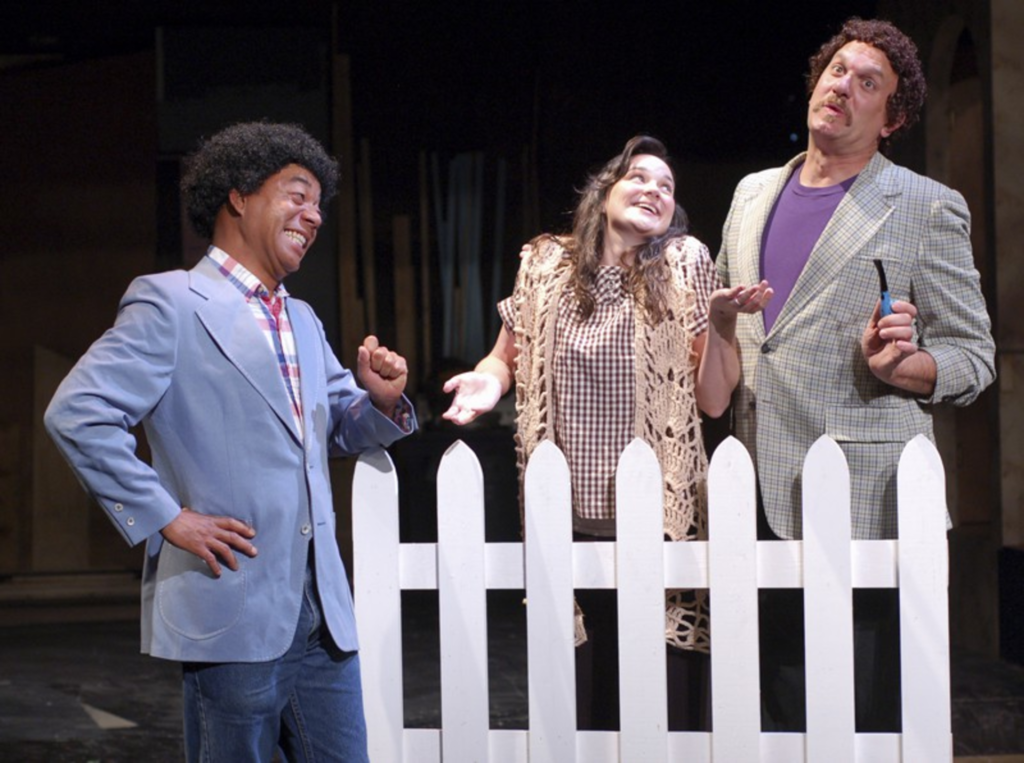 Early on in the Unicorn Theatre’s production of the inventive Broadway hit Well, just a couple of seconds after we realize that the play has, in fact, started, actress Melinda McCrary insists that what we are about to see is not a play at all. “It’s a theatrical exploration,” McCrary grandly says, “of issues of health and illness both in the individual and in a community.” A flutter in that reedy, comic voice of hers cues us not to take this too seriously. McCrary — who is playing the playwright Lisa Kron, though we might not have gleaned that yet — keeps on, outlining the schematic conceit behind the night’s entertainment: monologues and scenes that use her mother’s lifelong illnesses, along with 1960s integrationist activism, to explore universal issues of — well, something that must have sounded great on the grant proposal.

Happily, all this talk of universals is lanced by a yelp from the absolutely specific: that very mother (Joicie Appell), a house-dressed old dear who has been conked out in the easy chair at stage left since before the show started. McCrary’s Kron is startled, but not as much as the mother is. There’s an audience in her living room, and she’s almost immediately up and bustling, insisting she get us a drink.

Charmingly cracked yet fundamentally serious, Well spitballs together Kron’s autobiographical monologues with full-cast scenes and more meta-theatrical fourth-wall smashing than an undergrad playwriting workshop. While McCrary-as-Kron shares sharp, engaging stories of her youthful experiences in an allergy ward, or as one of the few white kids in a black school, Appell-as-the-mother offers corrections, questions and sensible objections. Following a pat scene depicting ’60s neighborhood organizing, the mother points out how much Kron has cut out while packing life into a play. We agree.

Like McCrary, Appell boasts a choice comic voice: McCrary’s is a silky rasp; Appell’s is a cartoon caw. Such unruly pipes constricting and releasing in smartly written argument is one of Well‘s chief pleasures. As our hostess, McCrary demonstrates a comedienne’s knack for monologue, and the character’s escalating uncertainty in her material is communicated subtly, through her vanishing dimples and the flattening out of her expressive eyebrows. Appell, playing the mother, is sometimes broad and sometimes natural, but not in a stagey way. Instead, it’s the way of aggrieved, attention-craving mothers. Early in the play, Kron-the-character marvels at how her mother is always either utterly devoid of energy or absolutely crackling with it. Appell, throughout, makes this more than believable — she makes it make sense.

Walter Coppage, Rachael May Roberts and Kyle Mowry are all bustle and hustle as the actors who turn on Kron-the-character’s material. Director Joseph Price barrels through the material, but clear emotional logic links each sequence.

This might all sound more complex than it actually is. In short, the show pits Kron’s fussy thematic conceits against the recklessness of real life. The artist-daughter and realist-mother face off over meaning and memory in scenes of clever comedy and affecting monologue. To make her mother’s story illustrate broader societal points, Kron-the-character wants to strip away much of that story’s particularity. Because every playwright post-Everyman understands that specifics are the surest route to the universal, this is a bit of a cheat. Kron-the-character often seems more naïve than she should: Her ideas are freeze-dried, and her framework is too brittle.

Kron-the-playwright gets this, of course. By the end, she’s even managed to explore all those “issues of health and illness both in the individual and in a community.” But to do so effectively, she has had to accept that the show is about people instead of issues. What’s most impressive here is that she has managed to do so while still giving audiences what feels like 90 minutes of comic dessert.