John Yuelkenbeck has some songs to charm your cheatin’ heart 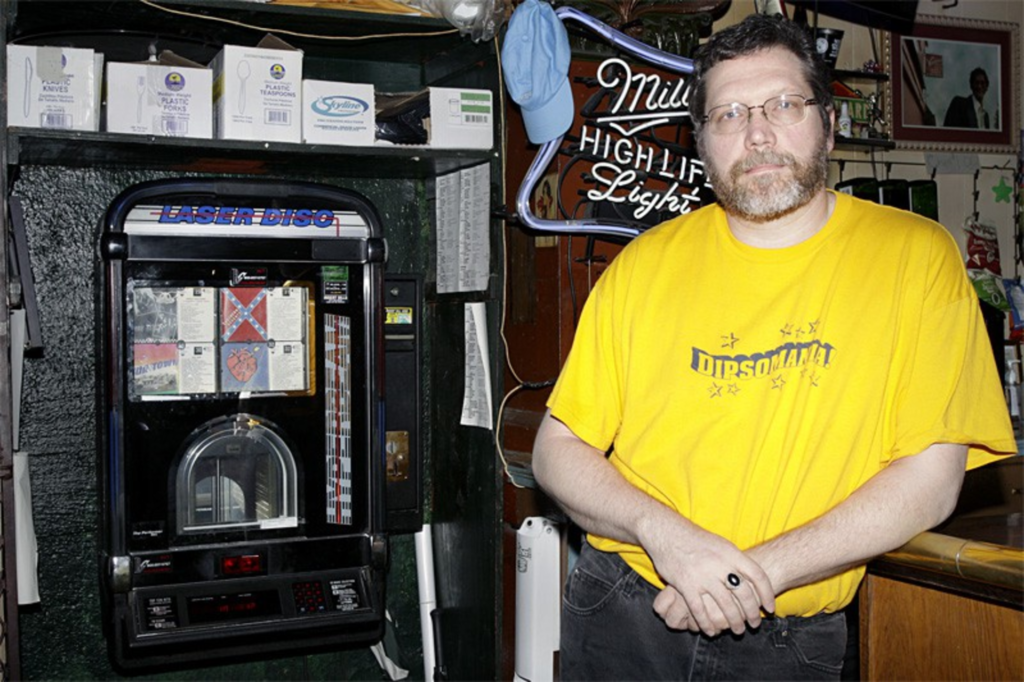 Liquor and broken hearts are steeped in love affairs of their own.

And John Yuelkenbeck, a bartender at Dave’s Stagecoach Inn, has plenty of stories attesting to that. “This one guy, real nice guy, his girlfriend broke up with him on Valentine’s Day at the bar. She dumped him, and he got completely trashed and threw up,” he says.

So go the hard times at the only Kansas City bar with a giant, blinking red arrow that directs lost souls inside its sympathetic, weathered walls. With ripped bar stools and shirts emblazoned with the slogan “Your 1st Stop After Parole,” this tiny midtown beer tank is a throwback to dive bars of another era.

A wise, grizzled figure with a quick wit and a head for music, Yuelkenbeck isn’t just the guy pouring beers for customers to cry into. He’s also the curator (master might be the better word) of the institution’s revered jukebox. With his weekly Jukebox Roulette, Yuelkenbeck has rallied a cult following around the discs inhabiting the bar’s box, sprinkling the usual torch-song fare with the works of serious (though not sobering) songwriters such as Tom Waits, Leonard Cohen and Bob Dylan. Why? Well, in a boozy joint like Dave’s, there’s always a place for a good brokenhearted love song — especially one about cheating.

“The cornerstone of country music — at least, ’60s and early ’70s country — is cheating,” Yuelkenbeck says. “A lot of it goes on in rock songs. It’s a theme. I guess it’d be easier to say, Where’s it not a theme?”

Yuelkenbeck has a name for his carefully assembled collection of Valentine’s Day love songs — cheating-themed and otherwise — that plays on heavy rotation as the day rolls around. “It’s called ‘Blue Valentine’ because of the Tom Waits song,” he explains. “There are 14 tracks, and then the 15th is Billy Bragg’s ‘Valentine’s Day Is Over.’ The song is about a woman who’s been beat up by her boyfriend, and she throws him out. So at least it bookends pretty well.”

Yuelkenbeck also has a couple of picks floating around in the jukebox that are particularly pointed cheating tunes. “I was going through the jukebox the other day and I was thinking, How could I have forgotten ’90 Miles an Hour (Down a Dead End Street)’?” It’s an old Hank Snow number, covered by Bob Dylan (one of Yuelkenbeck’s favorites). “It’s a classic,” he says.

Another of his top-notch cheating songs is Marianne Faithfull’s venomous, graphic “Why’d Ya Do It?” The bitter anthem is chock-full of expletives and rage, but to Yuelkenbeck, it’s poetry. “It reminds me of a Robert Browning poem,” he says. “He was known for these interior monologues. The way I interpret it, it’s these two guys sitting at a bar, and the one guy is telling his friend about how he’s cheating and how his girlfriend ripped him up about it. At the end of it, he comes across as a real cheating clod, but he doesn’t get it. He’s clueless and yet, because of the way it’s written, you come away thinking this guy is a real jerk.”

Sometimes it’s hard not to laugh at the melodramatic habits of bargoers, too: Yuelkenbeck admits, despite his expansive jukebox selection, that “Everybody Hurts” by R.E.M. is still a customer favorite. But the view behind the bar gives way to interesting observations beyond mere song choices.

“I’ve seen my share of cheating going on,” he says. “There was this couple who came in one night, around the holidays. All night, she was really drunk and she kept saying, ‘Isn’t he just the most handsome guy you’ve ever seen?’ And this guy’s just kind of bald and old and pretty ordinary. Come to find out, they’re both married. And they started using Dave’s as their secret rendezvous place. It went over the course of two or three years. They ended up finally getting divorces from their spouses. A few months ago, they came in, and they’d finally gotten married. Just from coming to Dave’s after this one Christmas party.”

Does the illicit behavior playing out in the bar surprise Yuelkenbeck? Yes and no. “You kind of think that people are going to have the same moral fiber you do,” he says. “This one guy, cool guy — we were talking music, and he seemed really nice, and his wife was very pretty. And one night, he was here by himself, and the next thing I know, he’s in the women’s bathroom with this girl, and people are pounding on the door, and you can hear them going at it.” He pauses. “You see a lot in 13 years.”

For nearly 60 years, Dave’s Stagecoach Inn has witnessed hundreds of relationships begin and end, all accompanied by boozy love songs echoing against grungy walls. To Yuelkenbeck, Jimmy Ruffin’s vintage tearjerker “What Becomes of the Brokenhearted” has become an emblematic tune for the lonely souls who frequent Dave’s.

“Carl, the bartender that I started working for, had asked me to put it on the jukebox,” Yuelkenbeck says. “I don’t know if I had it on there before he died or not. He’d asked for it pretty close to when he passed away.” Yuelkenbeck is silent, thinking about the song. “Sometimes I think of Dave’s as the sort of place where all the brokenhearted people go,” he finally says. “Maybe that’s what becomes of the brokenhearted: They go to Dave’s.”