The contradictions of a third John Wick movie 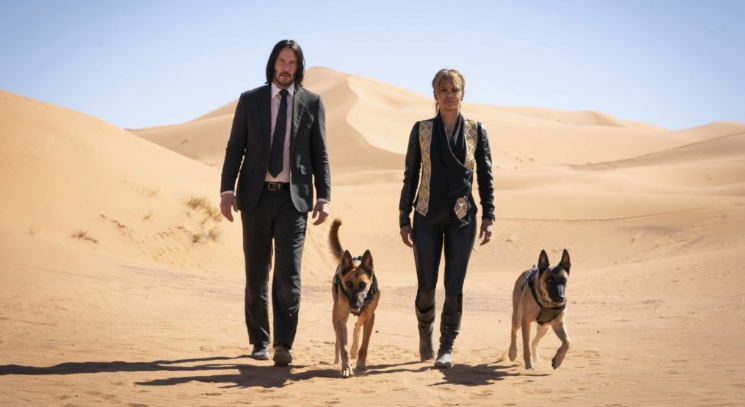 In my 2017 review of John Wick: Chapter Two, I praised the Keanu Reeves action sequel for successfully building out its world — a fantastical hitman society that operates unseen by the rest of the world — while upping the ante on its beautifully staged action sequences.

In John Wick: Chapter Three — Parabellum, which arrives this week, returning director Chad Stahelski again combines that admirable action aesthetic (Stahelski used to be a stuntman himself) with fresh novelties to produce more exciting fight scenes that continue to push the envelope. In Chapter Two, the sequences were shot with real stunt people (as opposed to relying heavily on CGI) and edited with a strong sense of spatial relationships (rather than the more common quick-cut nonsense that’s supposed to ramp up tension but usually just makes things impossible to follow). The same is true of Chapter Three, but there’s more action, and the scenes are longer, and the sheer amount of graphic violence is greater.

But when it comes to the former — the world of the film; the script — the third installment of the John Wick franchise stumbles badly. On one level, the screenplay (by franchise creator Derek Kolstad and co-written for the first time by three other writers) gets itself into a number of situations it can’t satisfactorily remove itself from. On another level, this problem is at least partially caused by the demands of the franchise to continue, and it will probably have a negative cumulative effect on its future (which includes an upcoming Starz network TV series spin-off).

Chapter Three immediately follows the events of Chapter Two, which ended with a $14 million-dollar bounty on formerly retired hitman Wick’s head. Winston (Ian McShane), the stolid proprietor of a secret society hotel called The Continental, gave Wick an hour’s head start before the contract became active, but at least one unprincipled hitman (an oxymoron the “rules” rely on) has opted to ignore it. As he tries to flee the rain-soaked neon jungle of New York City and its encroaching network of professional killers, Wick enlists the help of Laurence Fishburne’s Bowery King, who presides over a cadre of killers disguised as homeless people, and the Director (Angelica Huston), a Russian ballet instructor who reveals clues to Wick’s shadowy past.

Another admirable feature of the Wick series has been that, unlike many seemingly invincible movie action heroes, he makes mistakes, has to actually acquire and reload weapons, and gets tired and looks beat up during and after a fight. Here, he’s still stealing guns from the people he kills and constantly reloading them, but since the nonstop action of Chapter Three takes place immediately following the events of the last one, it becomes increasingly apparent that to have that kind of stamina, Wick must have been shot up with the same super-soldier serum as Captain America. I’m not one for poking holes in fantastical movies with unlikely premises, but by the end of the film, there’s some serious wear-and-tear from all the suspended disbelief being asked of the audience.

Wick eventually makes his way to Casablanca to team up with a dog-loving assassin named Sofia (Halle Berry), who’s one of many characters that re-iterates the overarching theme of the film: that decisions have consequences. But what consequences are there when the nature of the movie as part of a larger franchise prevents the natural course of action from taking place (i.e., main characters that should by all accounts have died, cannot do so)? This brings up the larger question of whether the current trend of serializing of so many movies is preventing filmmakers from employing the traditional ideas of well-told stories. Can we not have films anymore with distinct beginnings and endings that answer story tensions with closure, leaving characters permanently changed or with some final sense of lessons learned? John Wick: Chapter Three — Parabellum prides itself on lighting up your neurons and giving you everything you want in the moment, but by the end, it ultimately leaves the viewer feeling empty and unsatisfied.

The problem is deeper than its repetitive structural nature. The series has now completely outgrown the modest revenge-thriller origins of 2014’s John Wick. Three movies in, we still don’t understand all the rules of this mysterious underground international hitman society and a group called the High Table, which oversees it all. So as the codes that govern this body are further explained, we see more clearly the options available to Wick. Sadly, the solutions to each conflict become increasingly ordinary. It feels like the rules are changing on the fly. Part of this is because they weren’t laid out to begin with. The first two movies confidently teased, and then revealed, layers of mystery, but more and more as answers are revealed, it’s starting to feel like we’ve been cheated.

Additionally, despite all the innovations in action, I’m starting to feel the fatigue of the John Wick pattern of near-constant gun violence — not just from a lazy story standpoint, but also as a negative reflection of our country’s dangerous obsession with guns. As much as I think it’s important to identify purely escapist entertainment when you are watching it, it’s also impossible for fantasy not to reflect real-world cultural considerations when they are in the news each week.

Ultimately, John Wick: Chapter Three — Parabellum is a total contradiction. It sets a new bar for action in the moment, but suffers cumulatively for it. Meanwhile, as its universe grows larger, it gets less compelling, and the screenplay creates all kinds of problems for Wick that it can’t satisfactorily resolve. But man, you got to see the fight scene with the two German Shepherds. And the long-take motorcycle fight. And the fight with the 7-foot giant in the library!