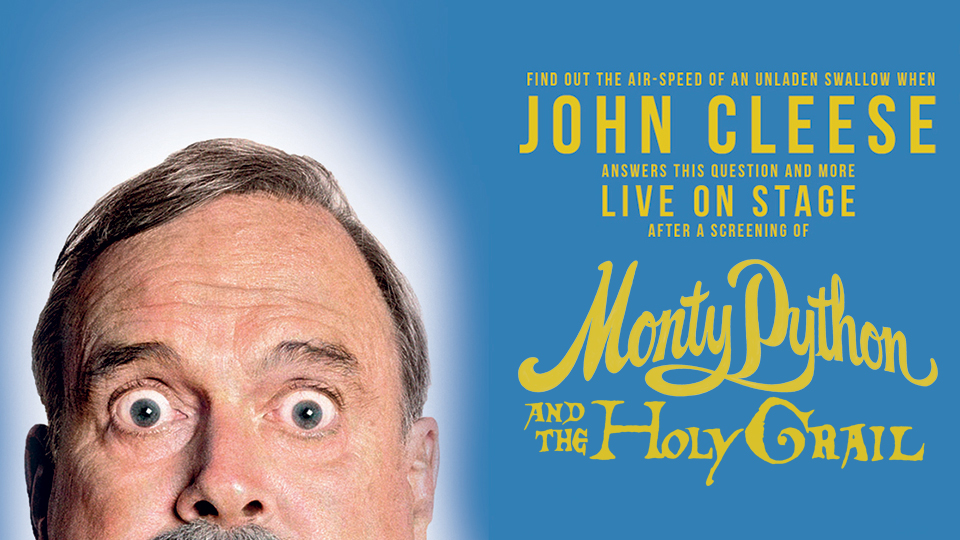 Onscreen, John Cleese frequently seems to be very upset about something. Whether attempting to return a parrot on Monty Python’s Flying Circus, running a lodge on Fawlty Towers, or being seduced by Jamie Lee Curtis in A Fish Called Wanda, Cleese’s characters seem dangerously close to the edge. Speak with the man over the telephone, however, and what you hear is wit, charm and cleverness — without a trace of anxiety or fury. (He did say he was suffering a cold.)

Cleese appears in person at Johnson County Community College’s Yardley Hall on Wednesday, October 4, alongside a screening of the inimitable Monty Python and the Holy Grail. I talked with him last month.

The Pitch: How does this upcoming tour differ from your in-conversation tour a few years back?

John Cleese: It’s not a great deal of difference. What I like about this, as opposed to my other shows — and I have at least two other one-man shows — when I do those, although I think they’re very funny, it does mean that I’m saying almost exactly the same thing that I said last night. If the audience is good, that’s lovely, but if the audience is hard work — and it happens sometimes — then going on and saying the same thing as last night doesn’t seem very exciting.

What I like about this is that there’s no preparation required. I’ve no idea what the questions are going to be, nor how I’m going to answer them, and that keeps it very, very interesting, because my anxiety level is very low. Because, people: If they don’t like me, they don’t buy six tickets to the show. Do you see what I mean? If they bought tickets, it’s for two linked reasons. One of them is that they think that I made them laugh in past, and therefore, they have a friendly feeling toward me, and that’s nice. The second is that they share my sense of humor. A lot of people don’t share my sense of humor at all, but they’re not going to buy tickets. So, I have a preselected set of people to like me. That means I’m very relaxed, and when you’re relaxed, you tend to be much funnier and wittier than if you’re a bit anxious and uptight.

The performance at Johnson County Community College is preceded by a screening of Monty Python an the Holy Grail. Do you find that there are a lot of questions about that film, just in general, given its status as a comedy classic?

Well, the people who love the film — and it is, in America, regarded as the funniest of the Python films — people who like it tend to have a lot of questions about it. They just sometimes say things like, “What is the velocity of a laden African swallow?” — quotes to just show how well they know the show — and sometimes they ask the most marvelous, silly questions, which leave me roaring with laughter.

I was asked last week, “If you could turn one of the Pythons into a dessert, who would it be, and what would the dessert be called?” I thought that was wonderful, and I said, “Idle Sorbet,” because I hadn’t time to think about it, but there were all sorts of lovely suggestions later, particularly on Twitter. Then someone asked if I was a component part of an aircraft, what component part of an aircraft, I would choose to be. Again, I could barely contain myself, because I thought it was just such a wonderfully clever thing to ask, and in the end, I said, “A joystick, of course.”

In Florida, a couple of months ago, when I was with Eric [Idle], doing a Q&A session, a woman asked if she could ask a serious question, and when we said yes, she asked, “Did the Queen kill Diana?” The only sound in the auditorium was me laughing. I thought it was hilarious, and in the end, I said, “Certainly not with her bare hands.” You never know what’s going to happen.

At the beginning there, you mentioned people quoting things you’ve done back to you. What gets quoted back to you the most?

I see what you mean. It depends which country I’m in, actually. It would surprise you, but if I’m in the UK, then it will be more lines from Fawlty Towers. They will make a reference to Waldorf salad. They will say to me, “Don’t mention the war.” In America, they will be quoting Monty Python to me. They will be saying, “How’s your silly walk?” and things like that. In England, it’s as though they’ve almost slightly forgotten about Monty Python – possibly because BBC television hasn’t put it out for something like 16 years.

Do you travel widely?

Oh, yes. Anywhere they speak English well. For example, you can travel and speak English particularly in Scandinavia where they all speak English rather better than the English do. They also speak English in Holland. Almost the best English that’s spoken anywhere on Earth is,  surprisingly, in Belgium. Also, for some reason, in France, Austria, Germany, Switzerland, but not at all in Italy or Spain. I could walk down the street there and nobody would have the slightest idea who I am, which can be a little bit of a relief sometimes.

But the place where I was most stopped, where I had to stop walking around the city, was Singapore. Isn’t that extraordinary? I couldn’t believe how many people, from how many different nationalities, stopped my in Singapore. Also, India, Australia,New Zealand, Canada, America — those are all big markets, but nobody in South America knows who I am.

This year marks the 30th anniversary of A Fish Called Wanda —

Watching the new Blu-ray that Arrow Video put out, I was struck as to how timeless it seems. Aside from the costumes, obviously, it seems like it’s just as fresh as when it came out in 1987.

Good, good. That’s the way that I feel, and I don’t quite know why. The great thing about both Python films is that they’re set in a historical period: a holy land at the time of Christ, and then in medieval times, which means that can’t hardly date, but not Wanda. Somebody asked me whether you could do it again, and I said that you’d have to completely rewrite it, because of cell phones. Do you see what I mean?

Oh, absolutely. It seems that certain genres of film as of late have been set in pre-mobile times, because a cell phone tends to take the suspense out of certain kinds of thriller or horror films.

I agree entirely. I think, from an artistic perspective, it’s an absolute disaster. I used to love heist movies, but if you go and see a heist movie now, every security system is based on a computerized system, and so, there’s always a scene where the geek stands there, looking at a screen, and all of the stars stand behind watching what he’s doing and being amazed at how very skilled he is. It’s a very dull scene. I’ve often thought that if I were going to do a big thriller now, I’d put in the reign of Elizabeth I and it would be to do with the Spanish Armada. In those days, they were highly intelligent, but they didn’t have these bloody computers.

Would this be a heist of the Armada itself?

Oh, no, but it would involve things like intercepting messages, and the simple old stuff, like disappearing inks and ways they used to get messages. By definition, when you involve a computer, it’s not terribly interesting. Watching intelligent struggling with difficult problems is interesting. Watching people with a computer isn’t.

Speaking of computers in a positive light, it says in the summary for this upcoming performance you give speeches to businesses. That just seems so curious — what exactly does that entail?

It started because I had a company with three friends, back in 1972, and we spent 20 years making rather good videos teaching people business skills — particularly, management skills. How to run a meeting, or do an interview, or how to make decisions, or how to delegate, that sort of thing. In order to get people in to look at our new films, we used to offer as icing on the cake, as it were, that I would give a little speech or a talk, about various management subjects.

After we sold the company, people continued to ask me to do the speech, and they were very different from what we’d been making the films about. Particularly toward the end, I’d been giving speeches almost entirely about creativity, which everyone wants to know about. And, while this may sound boastful, creativity is the one thing I understand probably as well as anyone else.

John Cleese and a screening of Monty Python and the Holy Grail, at Johnson County Community College’s Yardley Hall on Wednesday, October 4. Details on that show here.