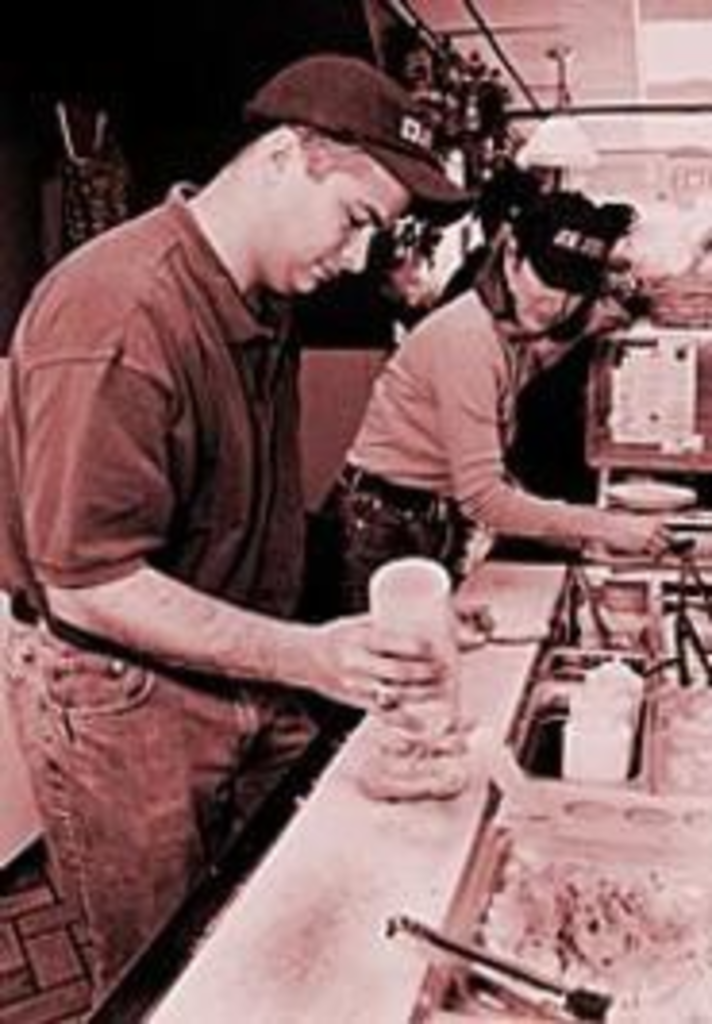 Without much thought, I had been calling Joe Joe’s Italian Eatery (4216 Main Street) a “joint.” Why? The place is a throwback to the no-frills neighborhood grills and pizza shops of the 1940s and ’50s, where a lunch or dinner could fill you up and barely make a dent in your wallet.

The slang term “joint” grew out of either the phrase “one-arm joint” (a place serving food, such as sandwiches or pizza, you could eat with one hand) or the fact that many Italian-American restaurants in big cities actually evolved from speakeasies during Prohibition, which explains why my battered Webster’s describes a joint as “a shabby or disreputable place of entertainment.”

But sunny Joe Joe’s, which hasn’t quite been able to mask the signature vivid mustard-yellow color of the Subway sandwich shop that preceded it in its midtown location, is neither shabby nor disreputable in any way.

“It could use a little floor scrubbing, though,” noticed my fussy friend John during lunch one afternoon. John had practically shuddered after we walked through the front door of the restaurant and he got his first gander at the tomato-red walls covered with wicker baskets and photographs, the smudged hand-drawn signs promoting the daily specials (“Mostacolli pasta,” it boasts, happily oblivious to the correct spelling of the noodle — mostaccioli, “salad, bread, butter, soda for $4.94”), and the Coke cooler crammed with clear plastic boxes of cheesecake and packaged salads.

Sure, the usual submarine sandwiches (served on soft, fresh-tasting Roma bread) and baked grinders are on the menu. But so are the grilled panini sandwiches the restaurant’s 29-year-old owner, Joe Zwillinger, first tasted on a backpacking trip through Italy, where the sandwiches are as ubiquitous as a McDonald’s hamburger is here. They can be as fancy as the kind that gourmet grocery store Dean & Deluca offers up in Leawood or as hearty and simple as the Joe Joe’s version: meat or vegetables on spongy focaccia, grilled with shredded cheese and selling for less than five bucks.

In Italy, “panini” is simply the term for a bread roll. It’s called “imbottito” if it’s a filled sandwich, but that’s more of a tongue-twister than “panini,” which some Kansas Citians stumble over the same way their grandparents mangled the pronunciations of “mostaccioli” or “fettuccine.”

“Is it pan-eenee or pan-ninny?” asked a friend of mine from the Ozarks, who later noted that the sandwich “is nothing more than a glorified grilled cheese.”

It is a glorified grilled cheese, even if the Joe Joe’s cheese version includes sun-dried tomatoes and a pesto mayonnaise ($4.25) and the shredded beef variety has caramelized onions and a splash of Dijon mustard ($4.99).

As I ordered my beef panini at the counter, I couldn’t help but see a blown-up copy of a 1952 menu from a long-razed midtown joint — the Tally-Ho Grill at 47th and Troost — and notice that a grilled cheese sandwich then cost 25 cents and a hot roast beef sandwich with gravy and mashed potatoes went for 50 cents.

The Tally-Ho was owned by the original Joe Zwillinger, Joe Joe’s late grandfather, whose entrepreneurial spirit obviously passed on to his grandson: Young Joe currently operates two of his namesake restaurants (one is in the food court at Town Pavilion in downtown Kansas City) and recently sold off his Johnson County operation, formerly at 119th Street, when “a guy walked in,” Zwillinger says, “and offered me a lot of money for it.” That place is now called Guiseppe’s Italian Café and serves a different menu. Zwillinger is focused on his midtown business and is dreaming up a new fast-food burrito-wrap concept.

Even at Joe Joe’s, Zwillinger is proving himself to be the Henry Ford of the fast Italian food business. On Sundays he offers a $2.99 all-you-can-eat pasta special (served with bread) that packs the place: “Not everyone can afford to eat on the Plaza, you know,” he says.

“Joe Joe” was never his nickname, Zwillinger says, “although my customers have started calling me that now.” He chose the restaurant’s name because it sounded sort of like a beloved Depression-era joint. “‘Joe’s Place’ sounded like a place that had been around forever.” The place essentially is the 21st century version of the Tally-Ho: a quasi-diner that serves cheap, homestyle meals and sandwiches and is operated by the owner’s family. (On a recent lunch visit of mine, Zwillinger’s father was at the cash register and his wife was overseeing the panini grills.)

Zwillinger isn’t of Italian descent, but his two-room restaurant (located in a brick storefront building that for decades housed an auto repair shop) is the same kind of pizza-and-sandwich place that immigrant Italian families across America opened at the turn of the century, starting out with pizza and adding menu items that could be made with the same ingredients and baked in the same ovens, such as grinder sandwiches. In writing about such restaurants, food writer John Mariani, author of the Dictionary of Italian Food & Drink, explained that pizza was “the bottom of the culinary and social scale, so pizzeria owners began offering other dishes, like the hero sandwich.”

What was a bargain in the 1940s is still a bargain today. But to keep it all affordable, Joe Joe’s has eliminated even the most basic frills, such as fresh lemon for the iced tea, which here is a Nestea product dispensed from the same self-serve fountain as the soda pop across from the cash register. The napkins are paper; the flatware is plastic. The cuisine might be Italian, but the style is strictly that of an American joint.

Zwillinger’s response? “Most Kansas City diners don’t really like spicy food. If he had asked for pepperoncini peppers, we would have been happy to put them on.”

It turned out that John was far more impressed by my panini sandwich (in fact, he grabbed half and immediately gobbled it down), which he found to be “crispy, hot, and delicious.”

“This isn’t my kind of place, mind you,” he said. “But I’ll come back for another panini.”

Joe Joe’s grilled panini sandwiches, like the pasta dishes here, are more “eye-talian” (the twangy American mispronunciation) than classic Italian — not bland, but uninspired. The hefty slab of lasagna, which is served (not quite hot enough) in a Styrofoam bowl, is swimming in that kind of slightly sweet southern Italian tomato sauce that’s been a staple of Italian restaurants for decades. This is the “blue plate special” of Italian-American cuisine: a generous portion of meat lasagna, two small wedges of focaccia squished into a foil square, a pat of Shedd’s Country Crock spread, and a nice little iceberg-lettuce salad doused with a well-seasoned oil-and-vinegar “eye-talian” dressing. It’s a bargain at $6.49. Filling? That’s an understatement. You won’t be hungry for days afterward, especially if you polish it off with one of those gooey wedges of chocolate cheesecake, which are baked just for him, Zwillinger insists, “by a 95-year-old lady.”

There are no photographs to be seen of this mysterious elderly pastry chef (too bad, because the cheesecake is very good), but there are lots and lots of photographs of Zwillinger (including his wedding photographs), his family, and the loyal customers who cart a bright-yellow “I Love Joe Joe’s” sign around to exotic locations. Just up from the cash register, there’s a snapshot of a man waving his Joe Joe’s banner from the Great Wall of China. Next to the photo, another customer has taken her own Joe Joe’s memento off to Africa.

Zwillinger gives these travel-weary, photo-toting customers a meal for four. (“It’s good public relations,” he says.) It must make for a lively homecoming. After all, sitting at one of those mustard-yellow plastic booths (draped with green vinyl checked tablecloths), eating a meatball sandwich, and nibbling at Italian potato salad from a plastic box with a plastic fork while listening to Top 40 radio hits makes it obvious this restaurant is smack in the middle of America, the land of the free and the disposable.

But a good, inexpensive joint is the classic American restaurant: nothing too fancy, expensive, creative, or demanding. Joints serve comfort food — without frills. And places like Joe Joe’s are nicer and friendlier than their corporate fast-food contemporaries and offer a lot more bang for the buck, with or without lemon.