An exotic-car mecca near Stillwell? Joe Effertz is on his way to making it happen. 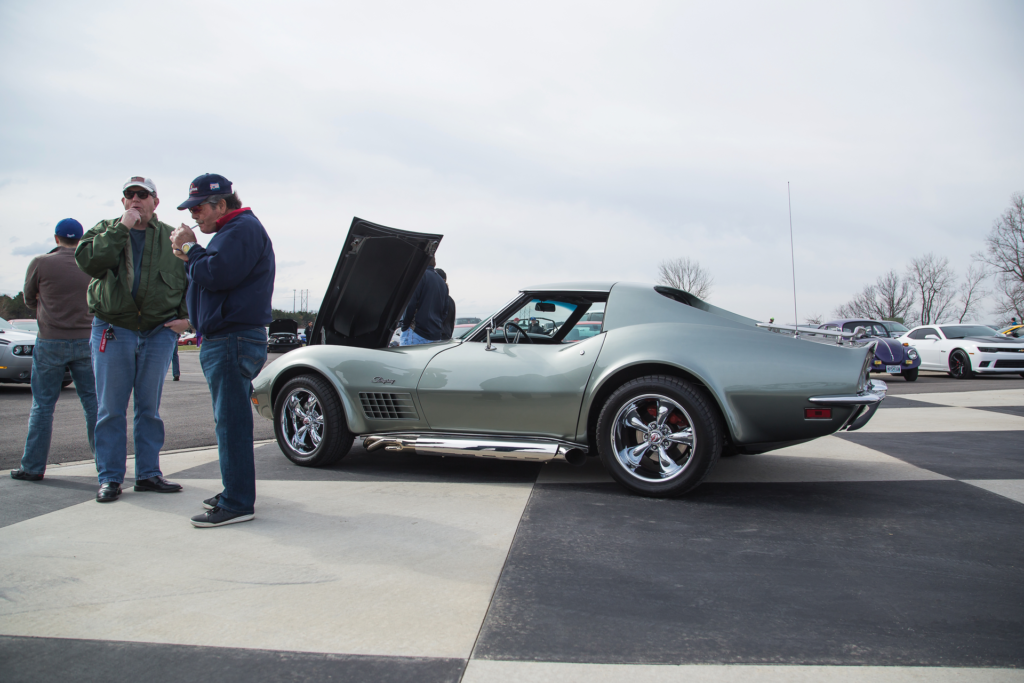 It’s the day before Easter, and the crowd at StoneGate Motorplaza near Stilwell is in a celebratory mood. Hundreds have parked along 207th Street and in a nearby field to gawk at all the eye candy: a Shelby Cobra, a gull-winged McLaren, a British Noble.

Inside the gate, people cluster around for a peek under the hoods of these and other exotic cars. Gun it! they shout to an exiting driver. A man in a ’61 Chevy Impala obliges.

Outside, more gather to cheer on the drivers willing to step on the gas and burn some rubber for a few feet as they leave the event. On the side of the road, a child, perhaps 12, lets loose with a derisive guffaw at a car that seems to be stuck in an adjacent field: “Oh god, it’s a Fiesta!”

Joe Effertz, owner of StoneGate, says this record turnout for his Cars and Coffee event may just be the result of an eagerness to enjoy a spring weekend. Then again, some of them may also be stoked about a project he has going just to the east of his car condo complex. In a field there, on what was once cropland in the Effertz family farm, a pattern has been traced on the ground. In a few months, when the blacktop is laid atop it, it’ll host something new to the metro: an automobile performance test track. Or, in other words: a place where people in the area who own some of the most expensive cars on earth can finally learn how to drive them. 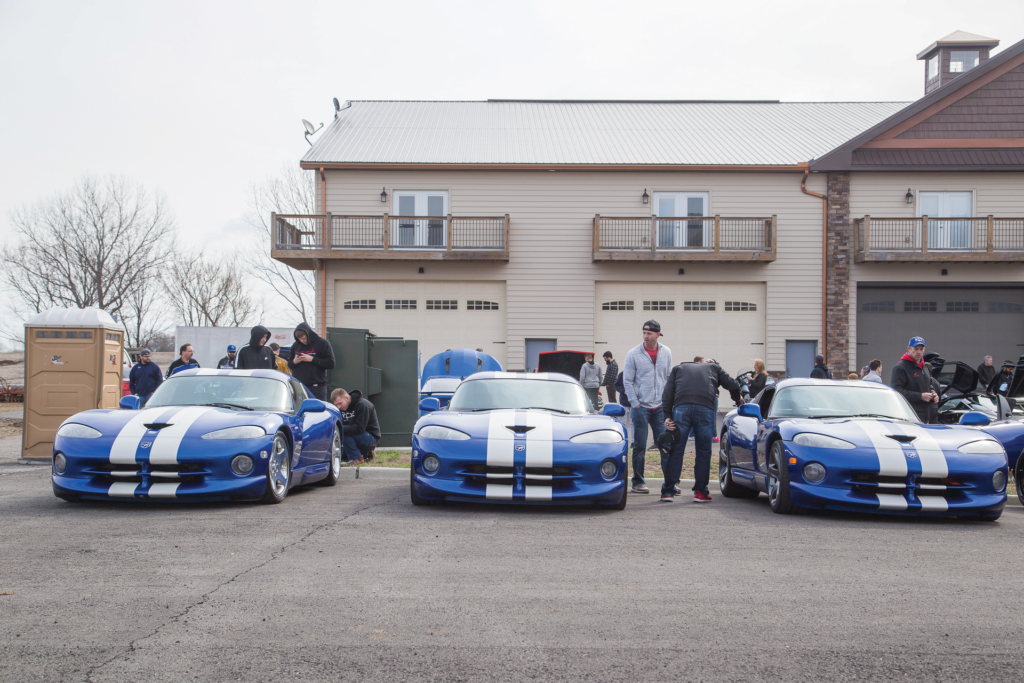 Kansas Citians do own performance cars. A lot of them, in fact. Black Horse Motorwerks, just around the corner from the Effertz farm, specializes in exotic cars and they see a lot of them, says mechanic Chazz Hobson. Hobson estimates there are over 400 Ferraris alone in the city.

“The numbers would surprise you,” he says. “There’s more Lamborghinis than you can shake a stick at. There’s several McLarens.”

Many of them are collector cars that never leave their garages. But sometimes those Ferraris and other exotics do venture out onto Kansas City streets, their whereabouts captured on a Facebook Car Spotters page like the sightings of rare birds: a Lamborghini Diablo list-priced at over $270,000, an Audi R8 for $165,000 and a Rolls Royce Wraith weighing in at a suggested $320,000. More spotted every day as the weather turns nice.

The local market for high-end cars has been on the upswing, partly because of the wealth in the area and partly because there is now more of a service economy to support them, Hobson says. A few years ago, owners had to have them hauled to someplace like Chicago for mechanical work.

Once the winter road salt is gone, it’s only natural to want to take them out and show them off. But that’s where the proud owners can get into trouble, Effertz says.

International soccer star Cristiano Ronaldo, for example, famously crashed his Ferrari his first time behind its wheel. YouTube is full of compilations of other inexperienced drivers who crash their supercars out on the highway. 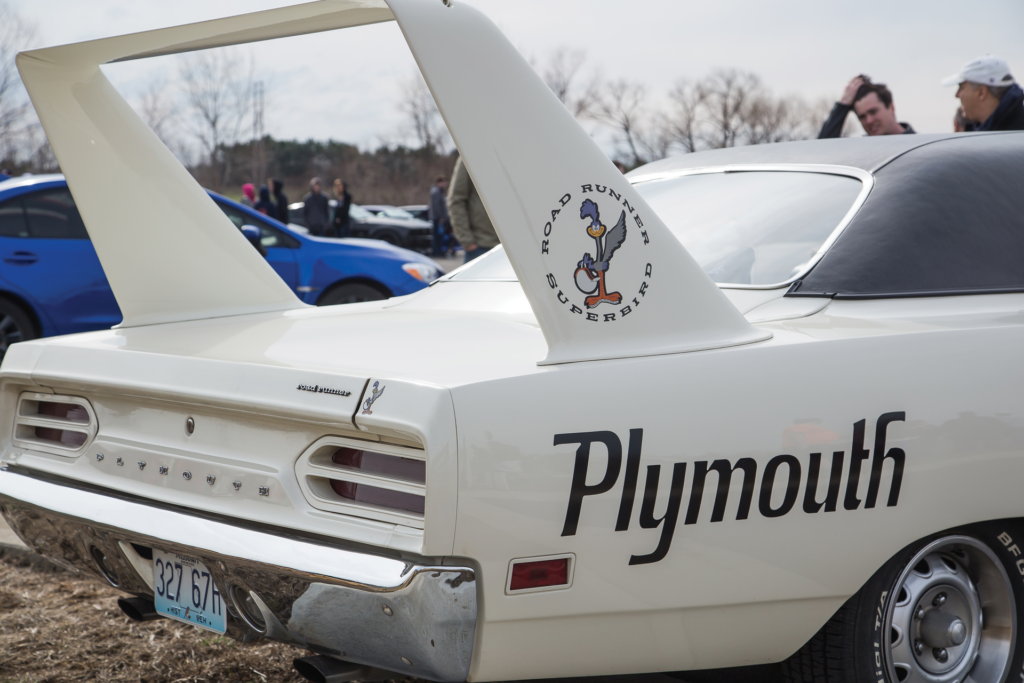 “Some guys are wrecking them pulling out of the parking lot — they’re that fast,” Effertz says. “You step on the gas and they do a 360 and you’re wrapped around a telephone pole.”

So Effertz sees his track as a public service, in a way. Sports car owners can indulge their need for speed without endangering anyone else on the public roadways.

Local car enthusiasts seem to agree. “There’s a huge need — and also the need to convince people that they need it,” says Nathan Powers of Blue Springs, who is on the board of the Kansas City Exotic and Supercar Club and the owner of 10 cars. For a city of its size, Kansas City is a “car-culture-heavy city,” Powers says, but, “there are some people who don’t know how to drive their cars.”

High-performance cars are built differently than cars most of us are used to driving, says Scott Quick, the aptly named director of track operations for StoneGate. “It’s the suspension, the horsepower, the drivability, the handling, all the engineering work that’s gone into making these performance cars,” he says.

“On the street you can’t begin to explore the abilities of your car,” says Powers. “The only thing you can do without being a complete fool is find a track.”

And a performance track has been lacking in the Kansas City area. There’s the Kansas Speedway, of course, but even if it was available for that kind of thing, its oval shape is not the best for probing the limits of performance street cars. 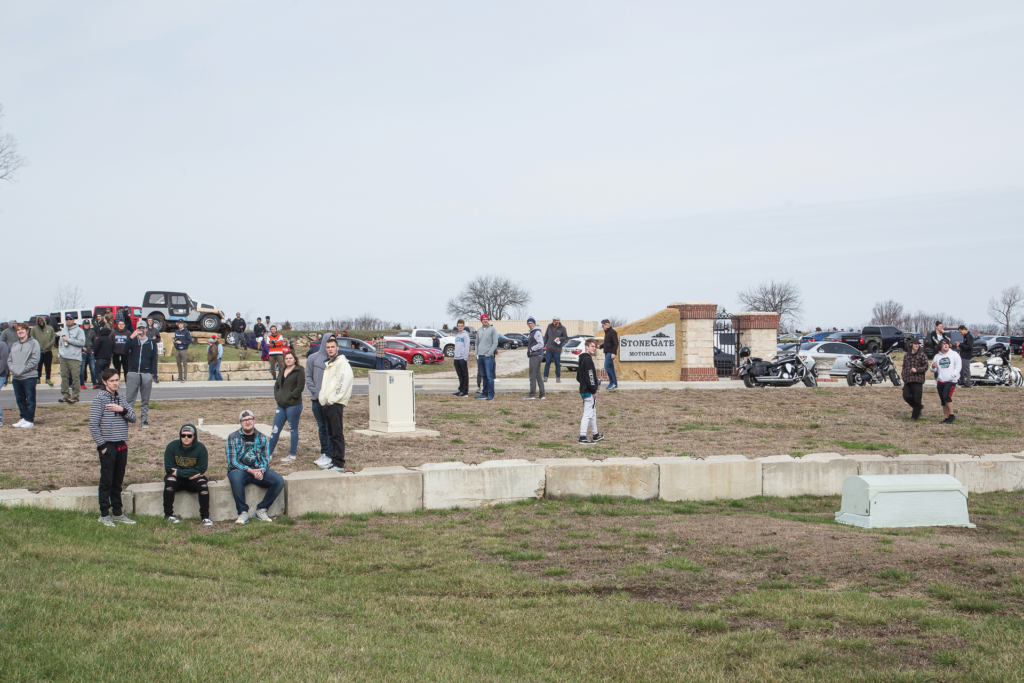 Quick, former manager of the Brainerd International Raceway in Minnesota, explains: “With NASCAR you’re always turning left. On dragways it’s always straight. This type of racing is very technical, very competitive. That’s why you design the track with all these turns and twists.”

The StoneGate track layout looks like a fancy paperclip or maybe a bent coat hanger. It will have twelve different racing configurations. The idea is to have a course route that can be changeable to keep things interesting. StoneGate’s was designed by Martyn Thake, a British track designer well known in the racing industry. Effertz is also bringing in a race simulator so drivers can check out the course before risking their wheels.

Even that won’t be enough, though. Quick says a certified instructor will have to sign off on drivers before they can race the clock unsupervised. “One thing you just don’t do is just turn people loose on a racetrack or a road course,” he says.

Track membership is required to drive on the StoneGate track or use the simulator. There will be a range of membership prices. But Effertz says the cheapest way to be a member is to own one of his car condos. He began building the condos about five years ago for people who want a place to kick back and admire the expensive cars they are storing. The condos, which can be outfitted with all manner of creature comforts, have been successful enough that Effertz plans to build more of them. Condo owners get lifetime track memberships as part of their deal. The condos list on his website starting at around $100,000. (Without a condo, the minimum for track membership is $15,000 for five years, put in escrow until the track is built.)

“This really is like a private golf course in the sense that it is exclusive and [has] a somewhat limited membership,” says Effertz. “But the big difference is that there isn’t another one of these five miles away.”

Many of Kansas City’s performance car owners have driven considerably farther than five miles to find a track to put a car through its paces, usually with groups that rent racing facilities for a day. The closest place to do that would be Heartland Park in Topeka. Heartland was closed in 2015 due to financial problems, only reopening to a full schedule last year.

There are tracks in Pacific Junction, Iowa, Hastings, Nebraska, and St. Louis, too. But KC-area owners must haul the cars all the way there, sometimes only to find out on track day that there were mechanical problems. “The worst case is you load up your car, drive to a facility far, far away, and find out something wasn’t right,” says Krull, who is enthusiastic enough about the StoneGate track to have sunk a six-figure investment into it. With the local track, “I’ll be able to head to an event with high confidence everything is ready to go.” 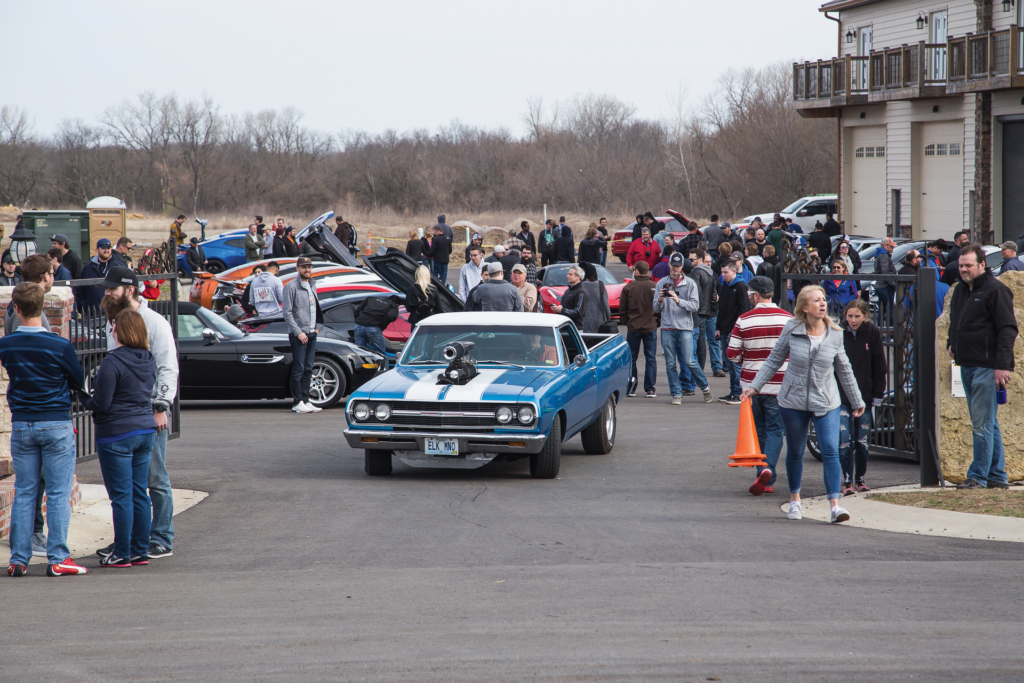 Many high-end car owners still grieve the loss of Kansas City International Raceway, which closed in 2011 and was turned into a city park.

It was a local drag-racing strip that Powers remembers fondly. The track was known for providing a drag-racing outlet to teenagers for a small fee back in the day, even offering grudge matches, he says: “A lot of people said the street racing scene increased dramatically after they closed that drag strip.”

But KCIR was the source of a lot of noise complaints from neighbors over the years, a fact Powers blames on development near the facility.

That could be a cautionary tale for Effertz. Unincorporated Johnson County is developing a reputation for neighborhood objections about everything from wedding event centers to the ting, ting, ting of metal bats hitting balls in proposed batting cages.

Neighbors did have questions when Effertz first brought his $5 million track project before county officials more than two years ago. But none were voicing complaints by the time his final approval went through in March.

Effertz, a veteran of other business pursuits, including Barley’s Kitchen + Tap, says he has done his utmost to make sure noise is not a problem. Drivers will be racing the clock, not each other, so there will be no noisy bunches jockeying for position. One or two drivers will be on the track at a time, and there will be no night racing. 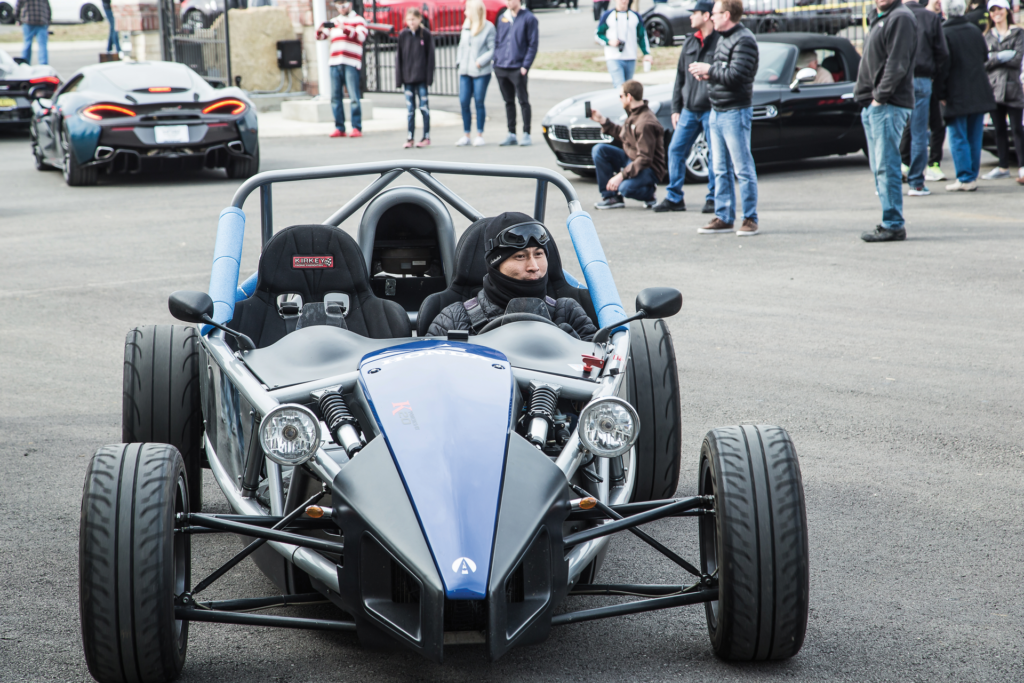 Multiple noise studies, including one by an acoustics expert from the University of Kansas hired by the county, showed even with the loudest engines recorded and unfavorable winds, the track sounds dissipate by the time they reach any homes. “There’s more noise from regular cars going up and down Metcalf than a race car being out in the middle of the field,” Effertz says.

Special events might bring up the volume a bit, but Effertz has to get permits if he wants to host any of those. He’s also promised to make the track available to law enforcement for training.

Effertz hopes adding the track to the condos will bring the synergy to eventually transform his corner of Stilwell into a hub for auto-related business. He suggests the track could be an attractive testing ground for research on autonomous cars. There’s still land available, he says, for “companies that want to cozy up next to the test track for testing whatever types of products. So there’s a need beyond the car culture.”

And that car culture goes much deeper than money, Effertz and Quick note, though it’s true that the test track is aimed primarily at the wealthy. And indeed, the crowd at Cars and Coffee seems to encompass all ages and income levels. Even car owners without a lot of money show up with their rides polished down to the lug nuts to display alongside the supercars. “It’s car people. Whether you’re interested in cars or not, you can’t help feeling the wow factor when you get in the midst of all these cars out here,” he said. “They’re just beautiful to look at.”

“It’s just passion,” Effertz says. “If you have a passion for something, you’re going to devote your resources to it. Just some guys have more resources to devote to it.”  ♦