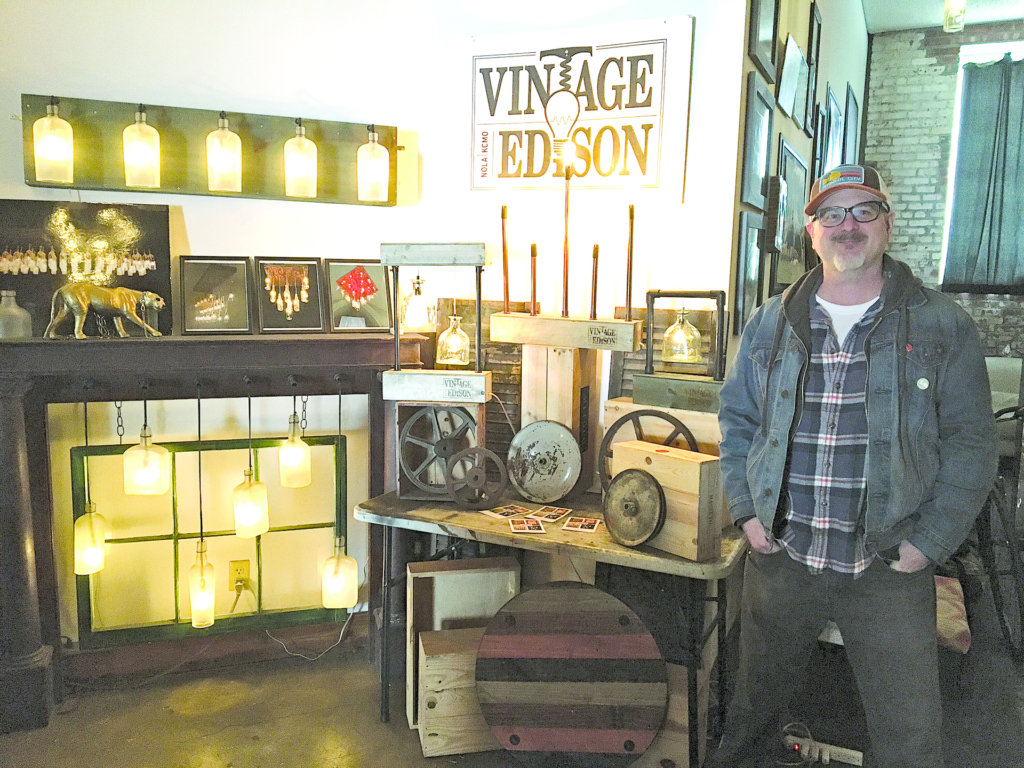 On a chilly spring afternoon, I find Jim Ligon in his Crossroads workshop, the door wide open to let in some air. The room is gently illuminated by several light fixtures he has crafted from empty liquor and wine bottles. The hum of power tools greets me at the entrance — Ligon is working on a chandelier for a client of Vintage Edison, his one-man custom lighting company. As I approach, he puts down his drill and introduces himself.

“You look familiar,” he says.

I scan his face and observe his laid-back attire — Kansas City trucker cap, flannel shirt, denim jacket. He looks familiar to me, too, though I’m pretty sure we haven’t met.

Odds are many midtown residents have seen Ligon around. Since moving here from New Orleans, in 2001, he has gotten to know the city while working as a bartender. Seven years ago, while slinging drinks at J.J.’s on the Plaza, where he still works part-time, he grew to admire the cool glass bottles he shepherded. And then he grew sick of seeing them end up in the trash (or, later, consigned to a Ripple bin).

So he thought of a unique way to repurpose those empty beauties. His grandfather owned an electrical contracting company in New Orleans, and Ligon grew up helping him on the job. It seemed obvious: He should turn those liquor-drained bottles into lamps and chandeliers.

“I would look at the bottles and picture them as lights,” he tells me. “But then again, I picture everything as lights.”

That’s when Vintage Edison was born. For the past seven years, Ligon has custom-designed business and residential light fixtures that unite his two loves: booze and electricity. His workshop, which is open to the public on First Fridays, houses several stunning examples: a row of vanity lights made from Bulleit Bourbon bottles, a stand-alone floor light whose dangling bulbs are encased in wine bottles, a chandelier featuring hand-blown tequila bottles.

The glass in that chandelier, he tells me, “creates a sparkle.” He shows me how a tabletop light made from the same type of bottle casts a starry glow on the wall behind it, as though the vessel were asking to be turned into a lamp. “It gives it a whole new life.”

Ligon’s inventions also give new life — as well as a touch of industrial elegance — to the rooms they inhabit. Many of Vintage Edison’s residential clients come to him hoping to update older homes: New light fixtures are an easy way to increase a property’s value. He advises people to design their homes around the lighting, which can lend dramatic effect to even the most mundane-seeming space.

To keep up with demand, Ligon has started a recycling program with about 20 restaurants and bars in town. They collect bottles for him, and he gathers the loot once a week — “checking the traps,” he calls it. “These bottles are worth more to me than what’s inside to begin with,” he says.

As Ligon’s business continues to grow, he’s eyeing his own storefront somewhere near 31st Street and Cherry. He says he has seen a lot of artists move to that area as they vacate the Crossroads, driven out by rising costs — an effect, in part, of the streetcar line. He compares the development of the Crossroads to what has taken place on the Plaza and in Westport over the past decade, with small, local businesses pushed or priced out in favor of corporate chains.

Still, he recognizes that this is one price of progress, and he has deep affection for his adopted hometown. In his time here, Ligon says, he’s seen Kansas City grow from a place where downtown was empty after dark into a “successful, bustling city.” And he tells me Kansas City is still a great, supportive place for artists and makers.

“When I moved here, Kansas City could either be considered a big town or a small city, but now it’s a bona-fide city,” Ligon says. “It’s the hidden gem of the Midwest. There’s a tremendous amount of support among artists and musicians, and I enjoy being a part of that.”