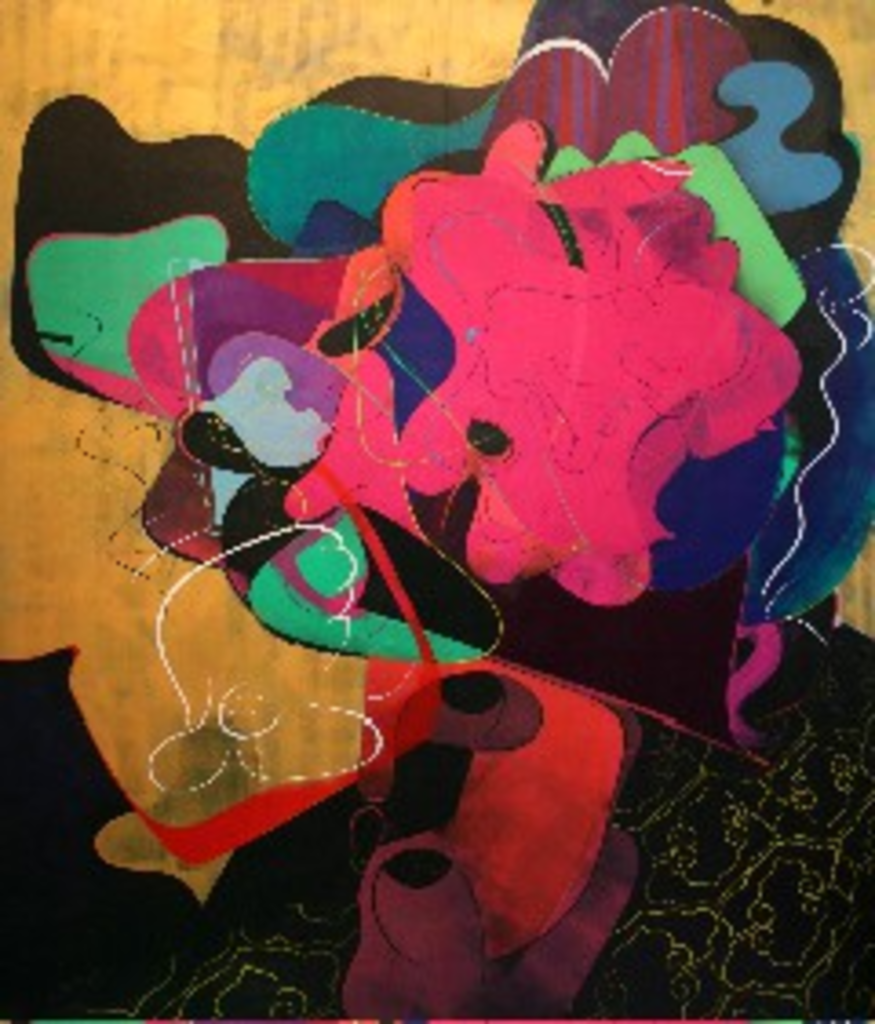 Jesse Christopher graduated from the Kansas City Art Institute in 2004. In this exhibition, he has moved from painting and drawing abstract human figures to making fantastical abstract paintings in which contour figure drawings seem to remain as ambiguous presences.

Christopher employs varied techniques in each painting, sometimes pouring the paint and sometimes using bold stripes that lend an unexpected staccato effect. By juxtaposing a variety of forms, styles and paint-handling methods within each work, Christopher displays a rigorous understanding of how abstraction and formal devices function. Clearly influenced by the late KCAI instructor Lester Goldman, Christopher has assimilated Goldman’s teachings without losing his own strong sense of self.

“Symptom Cognitive” is one of the largest works here, measuring 84 inches by 72 inches. It’s an exuberant acrylic painting on panel. Against a background of black and gold, the painting diverges into myriad ideas and formal pursuits: a sort of arabesque gold-yellow pattern gives the piece a slight decorative flavor, complementing the intense blue, pink and green sinuous forms that make up the bulk of the painting. Christopher works with biomorphic shapes that curve into and against one another. Seductively, he winds delicate contour drawings throughout the paintings, often evoking human forms or body parts.

“Corpse” is one of the most subtle and powerful paintings here. Midsized, with a black ground, its two large hot-pinkish-red shapes dominate the panel. One shape resembles an anatomical heart; the other is indeterminate and painted with a thinner application — Christopher allows the black background to emerge through the fine veil of the pink, making that form less substantial. He unites the composition with a blue contour drawing that may call to mind a fist or crumpled human form. With its organic shapes and narrative title, “Corpse” intimates Christopher’s attachment to a bodily presence — whose body or what kind is anyone’s guess, but the suggestion is authoritative.

This body of work also incorporates small paintings that range from 9 inches by 9 inches to about 12 by 12 inches. Christopher translates the large-scale abstractions into small scale with the same deftness he demonstrates in the monumental paintings. In a lesser painter’s hands, all of these works might be a mess of disorganized concepts, but Christopher handles his compositions with ease and maturity.

Also showing are nude drawings by Kansas City artist Lou Marek. Installed salon-style, some of them date from as far back as the 1970s. But composed in simple gestures and lines, they look fresh and timeless.