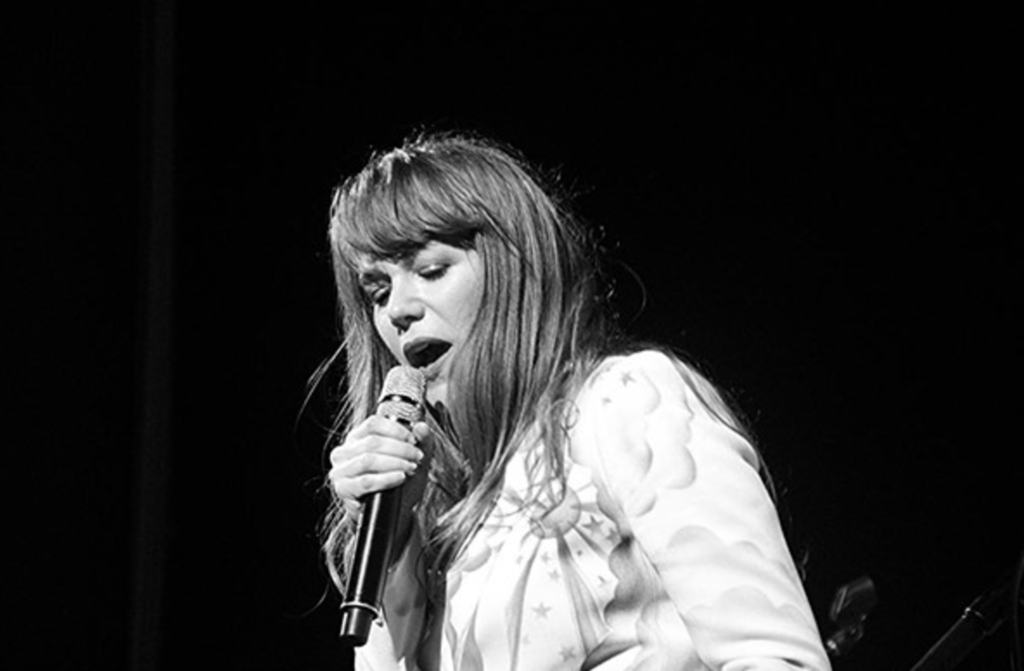 Jenny Lewis strutted on stage last night at Liberty Hall dressed in her trademark rainbow-printed white pantsuit, looking for all the world like the gangster boss of sunshine and unicorns. She kind of acted like it, too: As she opened with “Silver Lining,” a five-year-old Rilo Kiley song, Lewis, standing at her microphone with her rainbow-printed guitar, gave the audience cheeky, knowing looks.

Lewis, 38, is touring in support of her excellent recent album, The Voyager. It’s not a hard album to like, coated as it is in that dreamy California sound that Lewis has been dancing in and out of since her Rilo Kiley days. But the delightful pop of it seems a construct to allow for Lewis’ jaded heart and disappointments to go down easier. If we were to stop and really absorb what she’s telling us – on tracks like “Just One of the Guys,” where Lewis insists that she is just “another lady without a baby,” or even on the tender “Love U 4ever,” where her assertion of a love eternal sounds increasingly like self-assurance – we might get lost in our own wallowing instead of taking Lewis’ hand and meandering through hers. 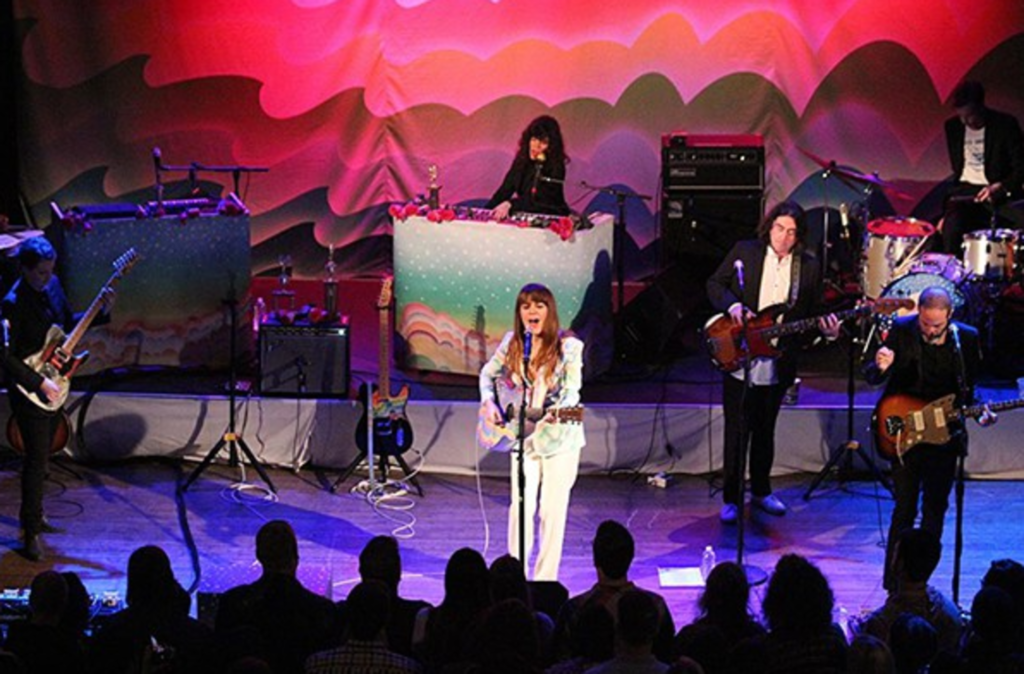 As it is, Lewis seems to have forcibly cast every dark cloud out of her kingdom. (Literally, if you’re looking at the cotton candy-colored stage setup.) Her performance at Liberty Hall last night was nothing short of joyful, despite the cynicism shrouding her songs. She smiled constantly, and she seemed to be having genuine fun with her band throughout the night.

Lewis was all about that audience engagement, too: After performing “Head Underwater” at a keyboard, Lewis grabbed one of the pink roses strewn about the stage and, with a wily grin, handed it to some lucky fan. During “Moneymaker,” she slinked from one end of the stage to another, sexy in an I’m-not-trying-very-hard-at-all kind of way. Everything about Lewis’ set was easy, actually – even when she was standing on her soapbox (her literal rainbow-printed soapbox), it wasn’t really to unite the crowd in a rallying cry so much as it was to gaze out at them and make things a little more personal.

Lewis’ band members, too, acted like they had the best job ever (well, probably). “The Last Messiah” stretched near the 10-minute mark and featured an extended jam replete with explosive, bluesy electric guitar riffs. Lewis interacted playfully with each band member before transitioning into a funky, 1970s-disco take on the Grateful Dead’s “Shakedown Street.” 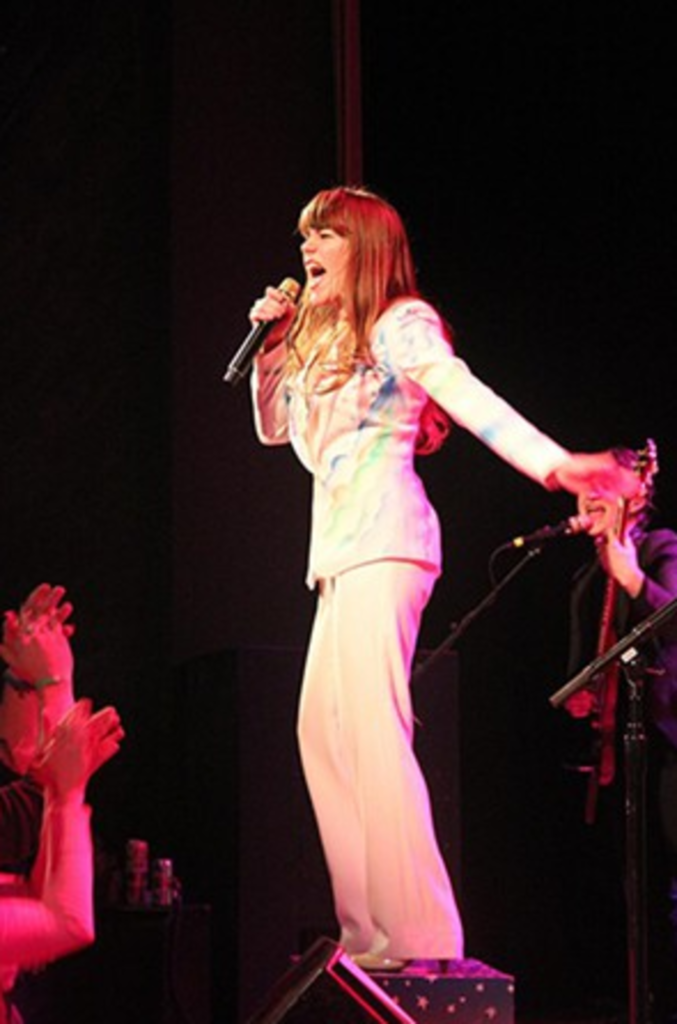 Somewhat disappointingly, Lewis didn’t spend much time on stage banter between songs. A shame. If her introduction for “Aloha and the Three Sons” was any indication, she could have added some entertaining nuggets to the night.

“I will say this: Paradise isn’t all it’s cracked up to be,” Lewis told her audience. “You got to Hawaii, you end up in a hotel in Meth Town. So what?” That sort of light-hearted wisdom was communicated two songs later, when stage hands released oversized balloons into the crowd. Life doesn’t go according to plan, Lewis seemed to be telling us, but that doesn’t mean you stop the party.

After a moving rendition of “A Better Son/Daughter,” which found the majority of the Liberty Hall audience vigorously singing along, Lewis raised her Styrofoam cup to the crowd and walked off stage to the charged hum of feedback. 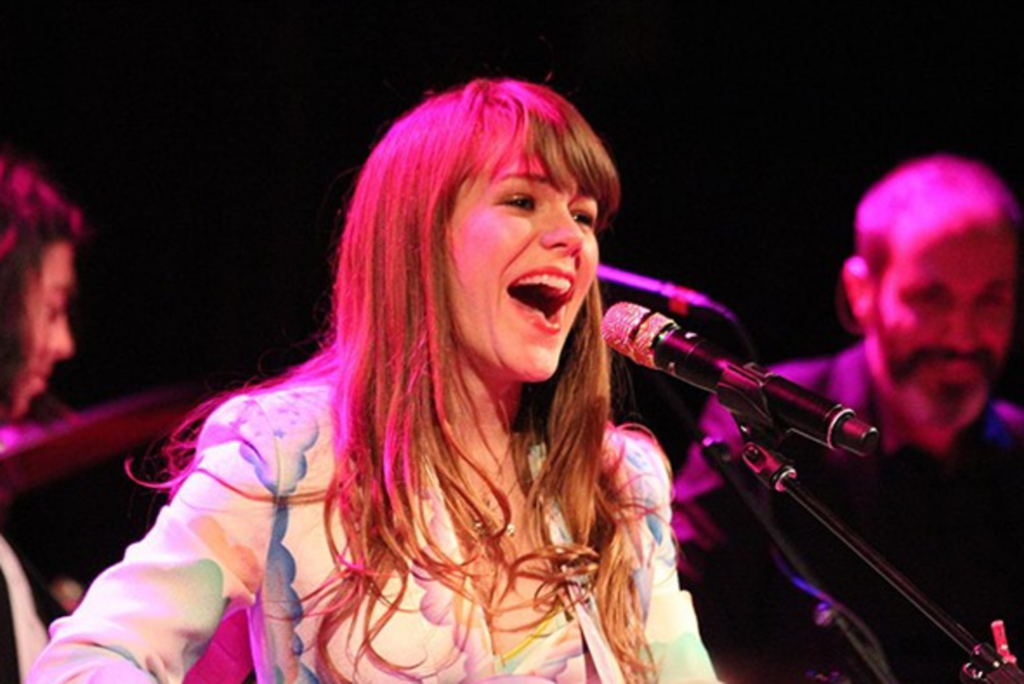 Stampeding and cries for her name brought her back out, first for a heart-tugging acoustic version of “With Arms Outstretched” with a guitarist and her back-up vocalist. Then the rest of the band joined her, dispersing party hats and bestowing Lewis with a rainbow-printed cake emblazoned with the phrase “Bon Voyage” (the Liberty Hall show was the final stop in Lewis’ solo tour). The band linked arms and formed a crescent behind her as Lewis delivered “Acid Tongue.”

The final song of the evening was “She’s Not Me,” Lewis’ second single off Voyager. Interesting, perhaps, that on a setlist featuring old cuts, Lewis chose to end the night with a brand-new song. But as she walked off stage, flashing a peace sign while her band finished the song, it felt appropriate to be reminded by Lewis that there was only one of her.

Leftovers: I didn’t get to the venue in time to catch the opener, Orenda Fink, but others who did told me she was a fun listen. Also, a quick shout-out to the bro-douche to my left who called, multiple times, for Lewis to take her top off: You are what is wrong with the world. 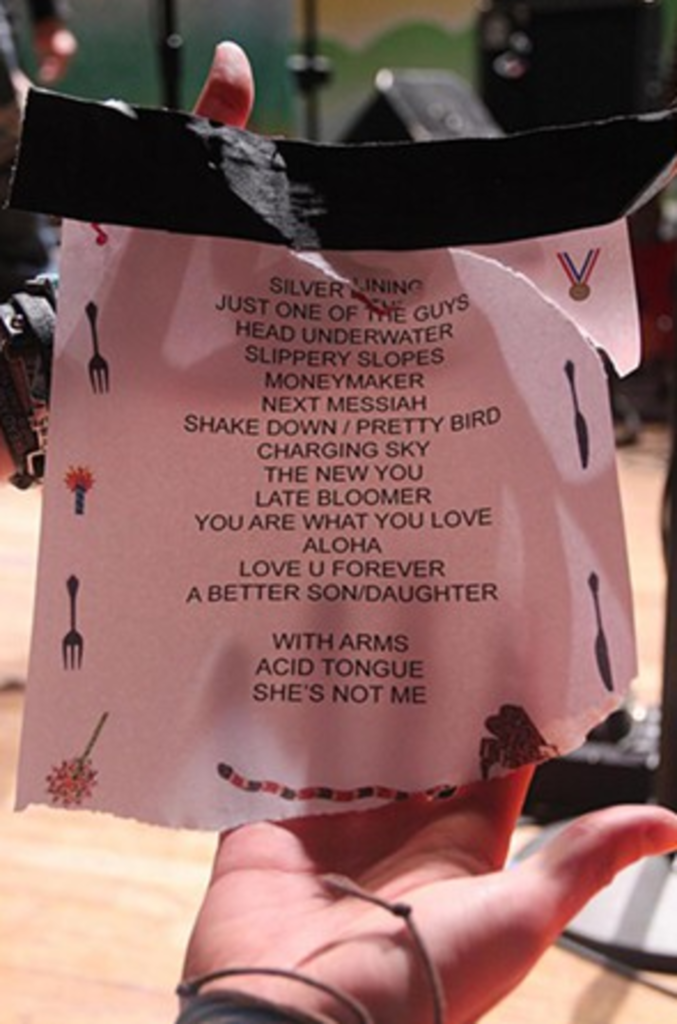