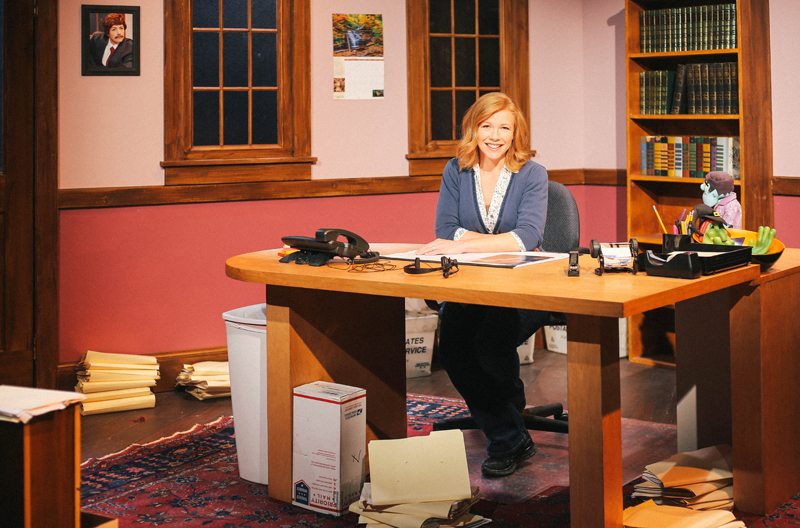 Jennifer Mays has acted and sung alongside nationally known talents. She has appeared on stages around town — the New Theatre, Kansas City Actors Theatre, the Coterie, the Rep — and outside KC. And she has danced on sheep poop (about which, more in a moment). This month, though, she goes it alone in the one-person Application Pending at the Unicorn Theatre (December 7-26), where her central character also takes on an additional 40 roles. It’s a challenge — one she clearly loves. She answered The Pitch’s questions by e-mail.

The Pitch: What originally lit the theater spark?

Mays: I never really thought I’d do anything else. I started dancing at 6, joined choir as soon I could, did theater and forensics in high school — even became my high school (and college) mascot.

What drew you into acting?

Might be in the genes. My mom did dance and theater in school and is a retired music teacher and band conductor. My dad did theater, too, and even though he taught computer science at Missouri Southern, he did some shows with its theater department. I remember seeing him and his best friend from childhood (who was a theater-tech teacher there) perform Pyramus and Thisbe (from A Midsummer Night’s Dream) — Dad wearing a flowing dress and a yellow, curly ribbon wig.

What brought you to KC or kept you here?

UMKC. I grew up in a small town outside Joplin, and UMKC had both a strong theater program and the Conservatory of Music (and was basically free; thank you, Missouri scholarships). I didn’t know that the two programs were not related — you got great opera training in one building and great straight-play training in the other but no musical theater. This was quite awhile ago — it has changed some since.

I’ve left KC several times and had great experiences in other cities, but KC has always drawn me back with fabulous opportunities — and even more fabulous people. Sure, there are “big” cities with as much theater and film (although not many), but KC has crazy-strong theaters, and our film industry is (finally!) getting back in the game big time.

You’re starring this month in Application Pending, at the Unicorn, a one-person show in which you portray many roles in addition to the main character. In what ways does solo work differ from appearing in an ensemble?

Wow — it is crazy-making! I certainly can’t rely on anyone else. But really, the difficulty in this show isn’t just that it’s only me up there (deep breath) or that I have all of the lines (ohmigod), but that I’m constantly changing characters. I can’t follow one person’s train of thought through to the finish because I have to jump into being someone else and then jump back — hopefully keeping each character’s wants, emotions, voices, physicalities, blocking and words straight.

How have you prepared for the play, and what challenges does it present?

I started by working with my director, Ian Crawford, to create each person in the play — find what they sound and look like. Then I made a recording in my home studio with all the lines of my central character, Christine, in one ear and all the 40 people she has phone conversations with in the other. And I listened to it all the time until our first rehearsal. So rehearsals have been about really making all these people clear — and ridiculous. (Oh, some of them are ridiculous!) It’s like an SNL player doing all their famous stock characters in one show, all talking to each other.

Which of the show’s multiple characters do you feel closest to and furthest from?

Christine is my voice and much of my personality, although I’m not sure I’d have the balls to pull off what she does. I love the sweet old kindergarten teacher, Mrs. Peterson. And Pat Hymen, the overzealous leader of PETA’s Mascot Violations Task Force, has been a lot of fun to play with. But the power-mad headmaster and the (um, shall we say, “easy”?) first-grade teacher are roles that I don’t get to play at other theaters. I have based a few characters on people I know here in KC (not saying who).

What’s the best part about what you do?

I play for work. It’s great. It’s hard work, and it takes a lot of time and concentration, but when the stories are told well, it’s magic. And I get to work with crazy-creative minds. It’s so fun to bat ideas around with people who are smart at telling stories. Plus, come on, I’ve played opposite not only KC acting royalty but also stars such as Marion Ross and Tom Bosley (Happy Days), Jamie Farr and Mike Farrell (M*A*S*H), and George Wendt (who’s here in KC right now — hi, George!).

People always say, “How do you remember all those words?” But really, the hard part is remembering those words while thinking about your blocking, what you want as the character, the character’s history and baggage that affect how you say those words, what’s coming up next … and not about all the shit in your own life! I’m very lucky to have a day job that is very arts-friendly and supportive of my schedule, but the holidays are pretty crazy. I’m in charge of shipping and wholesale accounts at André’s chocolates (you can buy them in the Unicorn lobby!), and at Christmas it is a more-than-full-time job. So taking on something like this right now is insane. To say I’m overextended is an understatement. But André’s, the Unicorn and my husband, Scott Cordes (who is performing in A Christmas Carol at KC Rep), have been super-supportive. (Thank you!)

What are some of your favorite roles?

Rocky the flying squirrel in Rocky & Bullwinkle at the Coterie will always be one of my favorites, and I learned so much working with KC icons such as Ron Megee, Missy Koonce, Jeff Church and Damron Armstrong. I always love working at the New Theatre, and this year’s Beau Jest was a great chance to play a lead in a sweet family story that also made people laugh. Both August: Osage County, at KC Rep, and Picnic, for KCAT, were just once-in-a-lifetime kinds of experiences, where you have the best script and best people, and I was lucky enough to get two of them. And I had a freakin’ blast playing an über Type A mom last year in MotherFreakingHood: The Musical (directed by Heidi Van), which I hope to get to do again very soon.

What’s the best thing that has happened during a performance?

I remember hearing the audience reactions during August: Osage County, at the Rep, and feeling that Yes! They are with us! feeling. Or several times out at the New Theatre, where I can only describe it as hitting a perfect pitch into the stands — a comedic moment that is set up just right by the playwright, director, designers, crew and actors to make 650 people laugh. Pow! It’s a pretty great feeling.

OK, maybe not worst but certainly memorable. Doing Gypsy at the New Theatre years ago — you know what they say about kids and animals? Well, long story short, we had a live lamb, such a sweetie, who grew too big during the run and had to “retire” from show biz, but when his replacement was injured, he came out of retirement and … let’s just say baby lambs can fit into toddler diapers, but adult sheep need Depends to fit their waists. Unfortunately, Depends don’t fit around their skinny sheep legs, so yeah, it was something to watch these poor dancer boys pass this giant sheep around while poop pellets scattered all over the stage, where I was about to do my big dance number that ended in the splits. Show biz!

Dixie Swim Club at the New Theatre, with Morgan Fairchild, running April 27–July 2. We did it at the American Heartland Theatre a few years ago and just had a blast, so I can’t wait to dive in again!