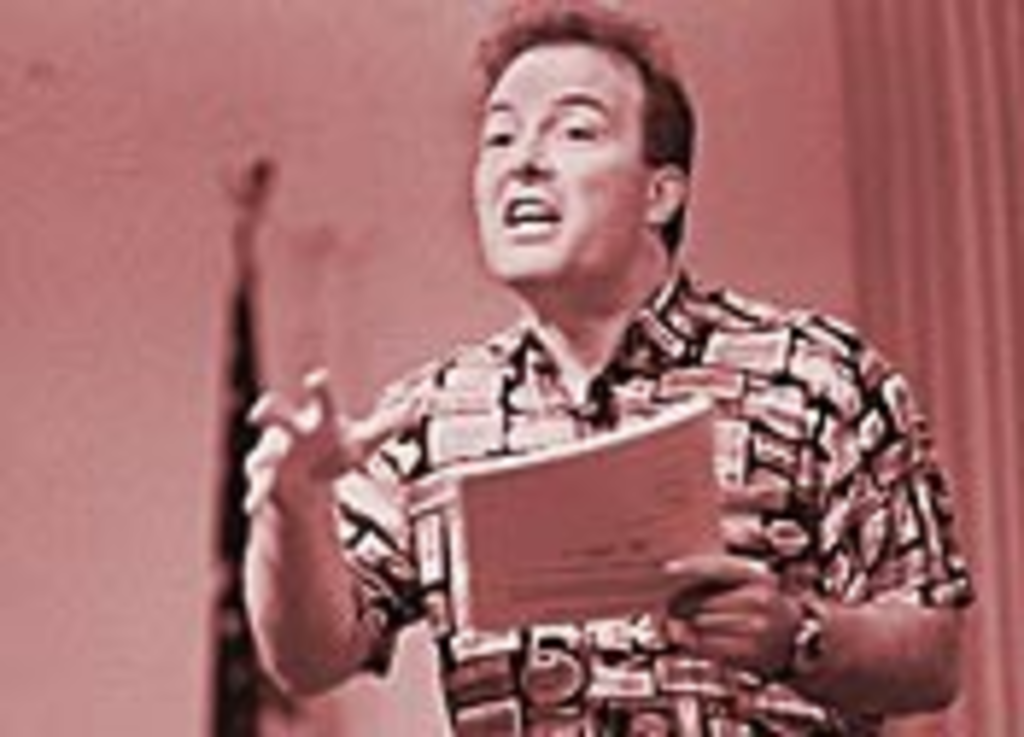 Biafra rallies the people who got into trouble at the People’s Rally.
It was difficult not to crack a smile on July 29, when former Dead Kennedys frontman Jello Biafra called the arrest of Mike McCormack and Sarah Viets a “Dukes of Hazzard attempt of people who smell a coming insurrection.”

The yahoo connotation certainly fit the Kansas City Missouri Police Department on May 13, when uniformed cops were on the prowl, four-door Fords carried sneaky plainclothesmen, and an omnipresent helicopter hovered just above the treetops — the only thing missing was an order to disperse, bayed through a bullhorn.

But the demonstrators had the bullhorns.

“Hey hey, ho ho, the death penalty has got to go!”

McCormack and Viets had organized the People’s Rally, and when it was over, both were cuffed and hauled away on a variety of dubious charges dealing with obstruction of a public street. The cops reacted in the best tradition of bad TV: “Nobody’s going to jaywalk in my town.”

But it was enough to cast a temporary chill on those who had taken part in the rally. They’d now seen a police action the Weathermen would have called an exercise in “pig order.”

The signs denouncing police brutality might have made some officers wince, and the chant for Abu-Jamal could seem like citizen betrayal, since the death-row inmate was convicted — many believe because of political and racial reasons — of killing a Philadelphia police officer.

But the arrest of McCormack and Viets was a “glowing example of exercising the right of assembly — and we’ll bust you afterwards,” says Richard Rostenberg, co-owner of Hollywood at Home video store and a member of the Free Speech Coalition, the 11-year-old group (formerly known as the Greater Kansas City Coalition Against Censorship) that sponsored Biafra’s appearance. “It made me scared.”

It had a similar effect on Anne Winter, owner of Recycled Sounds and a member of the coalition. “The Free Speech Coalition defends people whose voices are controversial, and (with McCormack and Viets) there was an obvious breach of the First Amendment.”

So when it came time to drum up more support for the cause, Biafra was the coalition’s natural choice. “Jello is the king of the First Amendment,” Winter says.

Biafra’s “coming insurrection” wordplay was ’60s-speak. Now 42, he wasn’t quite there at the barricades, but he’s closer to them than most of the approximately 400 people who came to the Community Christian Church to hear him speak. Most were in their 20s, specks of undefined energy when riots burned in Detroit and Newark in 1967, when Chicago Mayor Richard Daley unleashed the cops at the Democratic National Convention in 1968, when National Guardsmen shot four students dead at Kent State in 1970, and when Weathermen-fashioned bombs blew apart a Manhattan townhouse the same year, killing three radicals.

The smile I gave Biafra’s phrase was in remembrance. The chaos of radical thinking again hitting reactionary behavior brought thoughts of Vietnam-shipped body bags and Illinois Black Panther chairman Fred Hampton’s being killed in his bed during a police raid in Chicago in December 1969. Thirty-one years later, south of Chicago in Bloomington, police chase down, shoot, and kill a mentally impaired man for driving away from a gas station without paying for $15.05 of gas.

Three decades ago it may have been political violence. Now, it’s just plain repression.

When Biafra spoke of insurrection, I remembered Ray Mungo, co-founder of Liberation News Service. I heard Mungo speak my junior year in college. He was short, owlish with big glasses, intellectual. His speech mixed Marxist prophecy and hippie anger at a raging war machine. He urged us to fight for peace. Big government was the enemy — as it is for the Republicans of today.

Where Mungo pin-pricked the psyches of idealistic youth, Biafra entertained and satirized, stabbing at America’s totalitarian tendencies. Where Mungo glued himself behind a podium, Biafra paced. He attacked the country’s ongoing political absurdities and soothed the cynicism attached to the belief that America and its laws were only for the privileged. It was a rapid-fire prescription for change, modeled on his “What would Jello do?” platform, delivered at the Green Party convention in June, when he accepted a nomination for president in token opposition to Ralph Nader.

At the Community Christian Church, Biafra never brought up the words “the Left.” Political labels aren’t easily attached to what he is a part of. A generation removed from the failure of the Left in America, Biafra’s audience knows more of the WTO street protests in Seattle last year and the IMF and World Bank demonstrations in Washington, D.C., a few months later. They know of the drug war stripping away our constitutional rights, the two million people incarcerated in America, Nike sweatshops, corporate-staged political conventions, the concentration of media, and, as one 24-year-old who came to hear Biafra put it, “a dread that in a few years there will only be a few people in control of everything.”

Young people now, Biafra said, have “never known a time when corporations obeyed the law, or knowing people worth voting for, or having a news media that was independent.”

Kara Werner says all she learned in school was “rich, white industrial history.” She’s 26, college-educated, out on her own, and politically aware — representative of many who came to hear Biafra. Werner co-hosts KKFI’s Radio Station X, a listener call-in talk show. She’s a registered voter and supports Nader. The arrests of McCormack and Viets and “seeing things happening around me, to my friends” proved that what she had been taught in school wasn’t enough.

It began when she bought Fellow Workers, a CD by Utah Phillips and Ani DiFranco. On it were songs of labor struggles and of such organizers as Joe Hill and Mary Harris “Mother” Jones. “They were these amazing individuals,” Werner says. “I hadn’t been taught about people who gave everything.”

She needed to know more. On the cover of the CD, Werner read an introduction by Howard Zinn, author of A People’s History of the United States, 1492-Present. “I was curious,” says Werner. She devoured the book. It changed her.

“I began not taking what I had learned for what it was and began attacking things I was afraid of, like crime,” Werner says. “I used to take it as it is — these are bad people and that’s that. But I began using a filter for myself in questioning who is benefiting.” Her answer was the prison industrial complex — the increasing privatization of the prison system and those who are “buying stock” in prison-building companies. The capitalistic button was pushing along the drug war.

Werner heard Biafra proclaim, “Call off the drug war.” Instead of paying for more cops, “treat people who want to quit. Harm reduction makes more sense than redneck vigilante bullshit like ‘Three strikes, you’re out,'” he said. The drug war, Biafra charged, was “ethnic cleansing American style”; if all the state’s governors commuted nonviolent drug offenders’ sentences, they could end prison overcrowding. What America has now, with its growing privatization of the prison system, is a “field of bad dreams: Build a jail and they will come.”

McCormack and Viets were popped for exercising their free-speech rights, but nothing held back Biafra. He even dared God’s reprisal when he uttered in the church — with twin candelabra as a burning backdrop — “Balance the budget: Tax religions!”

The whole of American democracy is under siege, Winter says, and she believes that corporations run the government. “We need to have some sort of balance. Capitalism is great; I’m a capitalist. But extreme capitalism will take advantage of people.”

Twenty-four-year-old Rocky Supinger isn’t sure it’s just capitalism. He guesses globalization and the environment are the main issues on young people’s minds. Supinger is program director for YMCA’s Town Hall Project. It’s an effort to get 18- to 29-year-olds plugged into the political system by linking them to representatives of various political parties.

It’s hard to poll young people as to what concerns them, he says, but what he does know is that “overwhelmingly, there’s a sense that something isn’t right when it has to do with issues of democracy, community, and things being fair.”

Fairness wasn’t the reason charges against McCormack and Viets eventually were dropped (that announcement was made before Biafra spoke). They had been scheduled to appear in municipal court on August 10, and their attorney, Fred Slough, is being kind when he says the “city may have seen some potential for liability.”

Slough continues to push for changes in the city’s draconian parade-permitting process and has filed a lawsuit. “We think the ordinance needs to change. It keeps people from exercising their constitutional rights.”

Slough had monitored the People’s Rally and represented the couple pro bono. Young people’s participation “heartened” him at a time when, he says, “the average citizen has less and less say. Big bucks is all that counts in politics anymore.” McCormack, Viets, Biafra, and others “were just following their basic democratic instincts.”

Such an impulse needs to be set free more often.