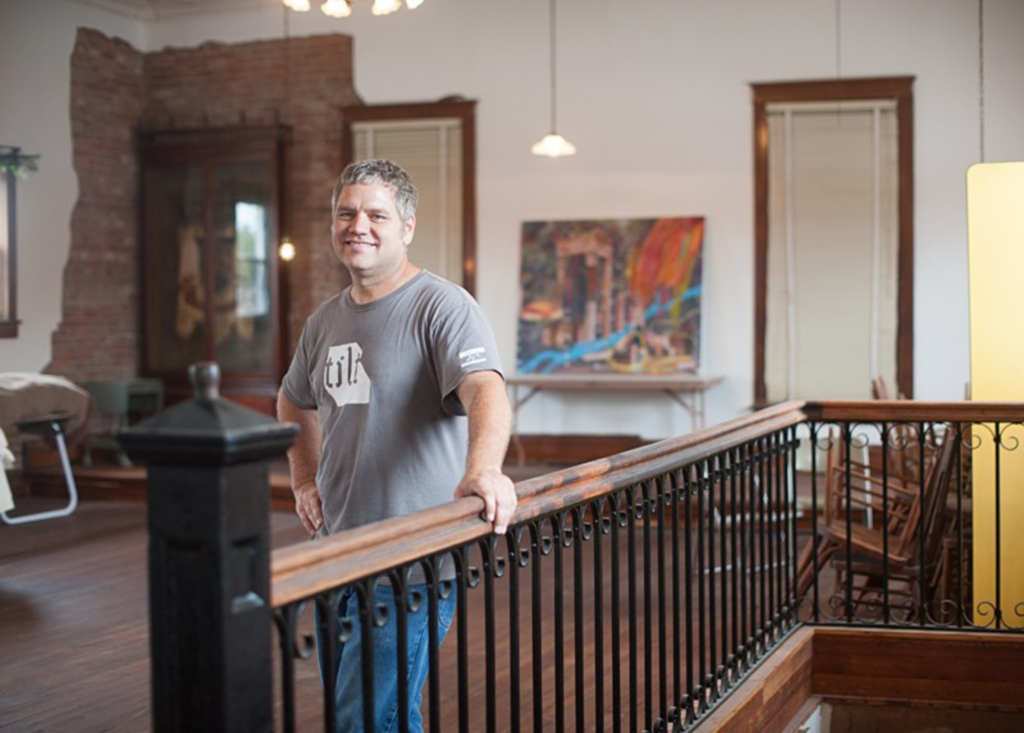 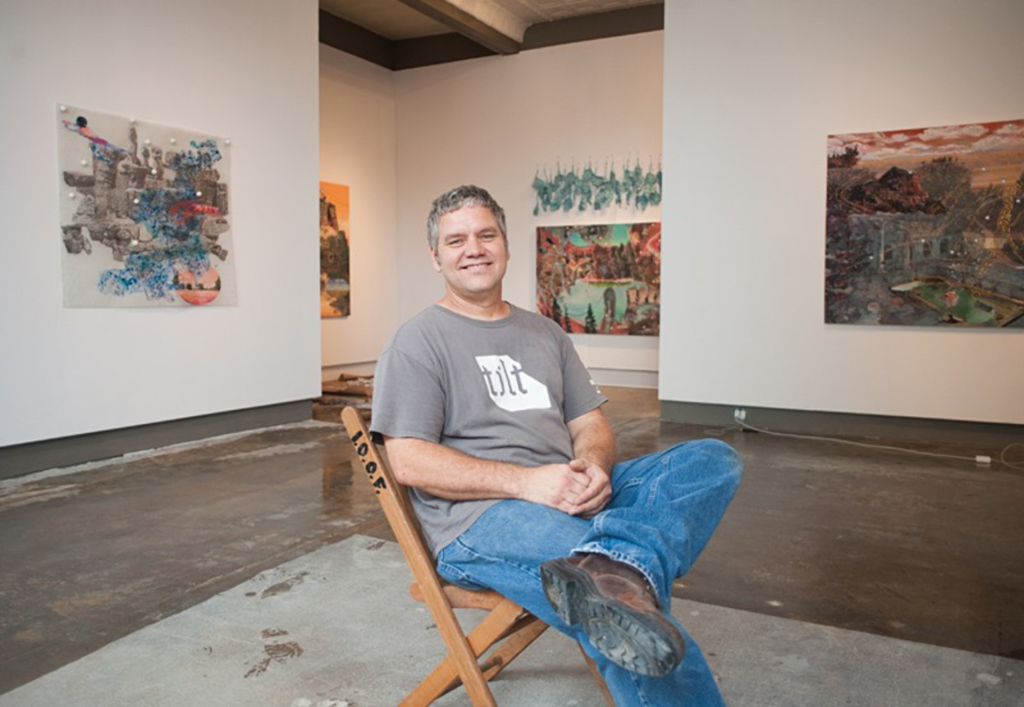 It’s crunch time inside this two-story, 130-year-old building in downtown Smithville. Fifteen days from this July afternoon, it opens as the Three Link Gallery.

Workers are putting up partial Sheetrock walls in the front room — a space where tall, exposed brick walls run up to a white pressed-tin ceiling. An inspector surveys the progress. Industrial fans blare in the summer heat.

Owner Jeff Becker steps away from his long to-do list for what has grown into a daily chat with his friend and business neighbor across the alley, Jonathan Justus of Justus Drugstore. Justus has arrived to return some tools.

The August 10 debut of the gallery, event space and studio marks a momentous occasion for both men. It furthers the vision that Justus had for his hometown when he opened his sophisticated, farm-to-table restaurant seven years ago to national praise. Plans for the gallery’s event space extend to Justus’ business. And for Becker, who founded Kansas City’s now-defunct Arts Incubator, the opening signifies the realization of personal and professional aspirations.

But this isn’t a time for reflecting on dreams. A deadline looms. Becker scans his place and embraces the loose ends with a calm smile. “We’ll be opening as the paint dries,” he says. “Isn’t that the way it’s supposed to be?”

The road to the present goes back to spring 2011. Becker, his wife and their children were living in Overland Park while Becker was executive director of Arts Incubator, a Crossroads space that brought affordable studios to emerging artists. He longed for a simpler life: a rural home and a small studio and gallery of his own.

One day, he wandered north, past the noise of the city and suburbs, to Smithville. A “for sale” sign outside the old hospital building on Main Street caught his eye. He noticed Justus Drugstore down the block and figured it wouldn’t hurt to stop in and introduce himself. He had heard of the restaurant, but he hadn’t yet experienced firsthand Jonathan Justus’ intensity and excitability — especially if you mention growing the arts in downtown Smithville.

“An hour later, Jonathan was walking me all around downtown, talking a mile a minute, all animated, about the history of every building and how he envisioned everything down the road,” Becker recalls. “It was, ‘a boutique hotel here, musicians performing in the alleys there.’ “

While Justus’ restaurant continues to lure diners from throughout the Kansas City area and beyond, downtown Smithville isn’t yet the vibrant destination the restaurateur pictures. (That said, Nellie’s Sweet Shoppe, a fudge store with old-fashioned charm, is worth the 25-minute trip from downtown Kansas City.) Yet the low-key atmosphere of this city of 8,000 felt like home to Becker, and he fell in love with the potential he discovered in a building at 108 North Bridge Street.

Inside Becker’s new place in Smithville, he tore down drop ceilings, paneling, drywall, red carpet and seafoam-green curtains and discovered brick, wood and pressed tin. “There was all this 1980s trash construction,” he says. “It was like a gift. As I unwrapped it, I started to see the treasures.”

Since the early 1880s, the building had been in the hands of the Independent Order of Odd Fellows, an obscure, co-ed international fraternity. The organization had rented out the first floor to various businesses over the years, keeping the upstairs as the local Odd Fellows headquarters. A storage room served as a clubhouse lair of sorts, packed with medieval-looking regalia, secret writings and a casket bearing a skeleton. (The casket had vanished by the time Becker took possession of the building.)

Fascinated by his building’s history, Becker embraced the past as he crafted his new venture. The gallery name honors the Order of Odd Fellows, which promotes itself as “The Three Link Fraternity” and announces itself with a three-link logo containing the letters F, L and T (for “friendship, love and truth”).

The upstairs now houses an event space. A new industrial kitchen makes way for catering by Justus Drugstore. With a historic-meets-hip space for 150, Becker hopes to attract Northlanders planning wedding receptions, parties and business meetings, as well as Justus customers.

Justus is characteristically giddy about what’s taking shape a few steps from his patio.

“Camille and I always viewed what we were doing to be a catalyst for something bigger downtown, and we always had the arts in mind,” he says, referring to Camille Eklof, his wife and the restaurant’s co-owner. “What Jeff is doing is bigger than any single project we envisioned.”

In the back of the main floor, Becker, a sculptor, has his own studio space. The front room holds the gallery, which will feature regional artists. First up: a solo exhibition by Denver artist Melissa Furness, titled Sticks and Stones. (The opening reception runs from 5 to 9 p.m. Saturday.) Her paintings and objects explore the paradox of ruins and self with what Becker describes as heavy depth and breadth of meaning. “Her work’s not shocking but engaging — a good fit for this community,” he says.

Becker says he’s looking to create collaborations with locals outside the artist community — organic gardeners, perhaps. “We simply want to work with other people doing exceptional things, whatever that may be and may bring,” he says.

When Becker pictures the end of construction and the beginning of gallery life, the word contentment comes to mind — something he has found at his three-acre farmhouse property on the edge of Smithville. There, he has converted a root cellar behind the house into a wine cellar.

“I like to get some cured meats and cheeses and wine and go down there and just sit,” he says. A wide smile crosses his face. “We have chickens now, too,” he says.