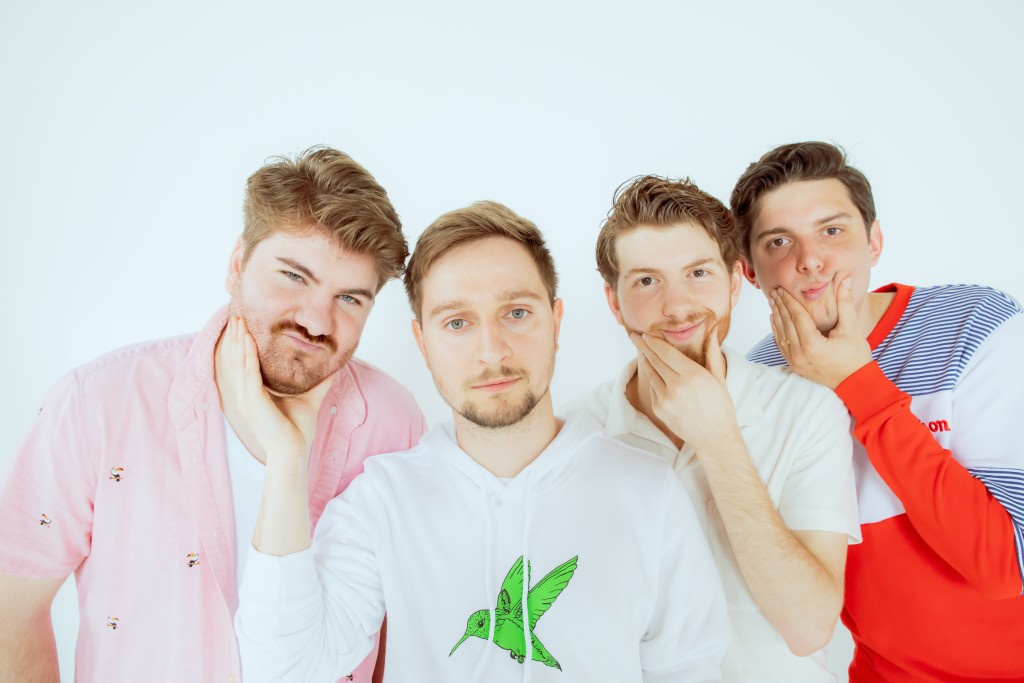 Jean Claude and the Eclairs. // Photo by Victoria Marie Photography

Jean Claude and the Eclairs is a band that probably shouldn’t exist, but somehow still does. This isn’t to say the music isn’t worth listening to–their pop-rock-influenced EP How To Talk is a collection of catchy tunes that reflects the ways in which the band has grown since initially forming under the name “Hireth” in 2015.

It’s their commitment to one another and the music they’re creating that fuels their success. Despite an eight-hour divide between members in Kansas City and Chicago, they sound better than ever.

The Pitch sat down with lead singer Cooper Scott, bassist Garrison Krotz, guitarist Ryan Pollock, and drummer Quinn Maetzold in late August—the band high off a performance at Topeka’s Forgefest. Their itinerary for the weekend included sitting down with us and making an appearance on KSNT News.

The Pitch: What have you been working on since your last release in 2019?

Garrison Krotz: We put out How to Talk in June, so now we’re in a state of writing what’s next. Whenever you do a record, it takes a year to complete, but at the time you’re doing it, you’re writing the new stuff and what’s next already. That’s pretty normal for bands, so that’s what we’re looking at right now.

What does the long-term look like for us? Will we be recording or playing some bigger shows? That’s all hopefully in the works now. The new stuff sounds really cool, and Ryan is actually doing most of the mixing on that, so we’ll see how it all works out. It’s more fun to do it when we don’t have a producer who we’re working with; it’s more of a process for us. We have a more hands-on approach, and we’re able to control more of the creative direction.

How do you make everything work with half of the band in KC and the other half in Chicago?

Ryan Pollock: I think it has, in some ways, a benefit for us because some bands who live so close will take it for granted that you’re always there and you’re at each other’s disposal. Being eight hours apart, we have to really plan what we’re going to do.

We’re going to come down for a weekend, and we’re going to maximize. We’re going to meet with you at a coffee shop and then head back to Chicago today after playing a show late last night, so we try to cram two weekends’ worth into one. In some ways, that has benefitted us a lot, and other times it’s an eight-hour drive, so there are always those challenges, too—lugging equipment.

St. Louis has kind of been our headquarters, too. There’s some family there, and it’s halfway for all of us. Drive four hours, and you’re in St. Louis.

We recorded How to Talk with Ryan Wasaba, who has a studio in Edwardsville, Illinois. His studio is a renovated church. It’s not a huge church, but it’s kind of a crumbling one off I-70, and he just bought it. So the whole thing was recorded inside of this church area. The mixing console was in the middle of it.

[Editor’s Note: Edwardsville, Illinois is located 25 miles from St. Louis, a small suburb where this writer was bussed to school from a much less populated farm town. Small world.]

Quinn Maetzold: I was going to say that it was great working with him, too. He’s pretty big in the St. Louis area and produces for bands like Foxing and stuff. It was definitely worth the trip to work with him, but we’re looking forward to producing our own stuff, too. 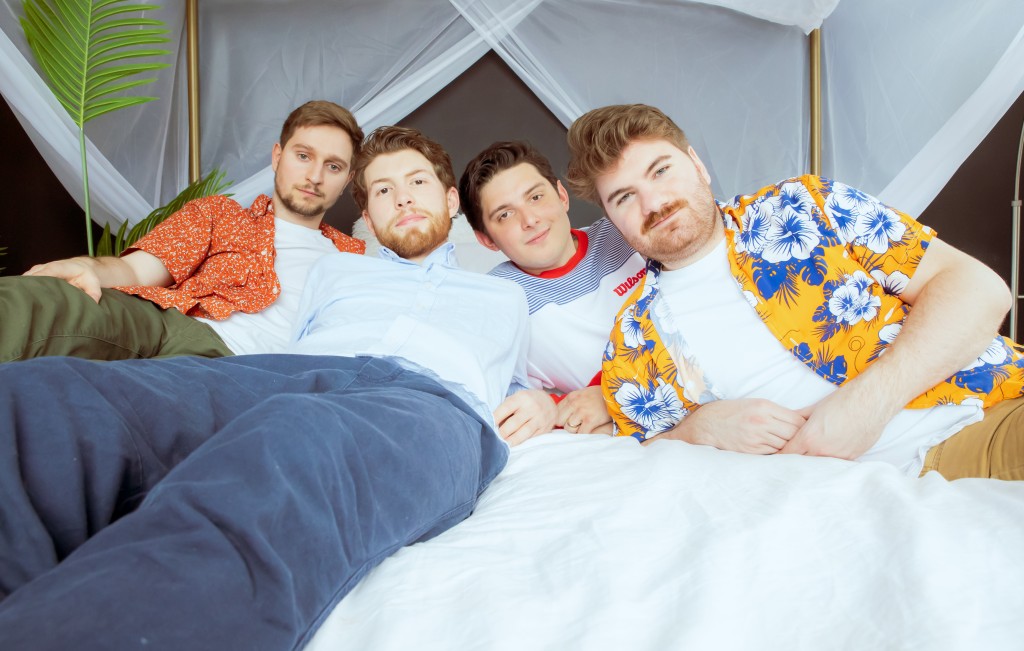 How does your collaborative process work?

Cooper Scott: Why don’t we text each other? We all have iPhones.

RP: It starts out as a message that Cooper sends the band with an idea, and then when we finally get together, it will start to take shape in some way. Someone will add something on there. Working with Ryan Wasaba on the last album, I think the songs took a much different turn from where they were at, and it’s really fascinating to see it build from the ground up.

QM: Due to the nature of geography and us not being around each other so much, we’ll share ideas and snippets and voice recordings of ideas, melodies, or lyrics put together in Garage Band or a Logic sample of something we’ve been working on. We all have the time to sit on it and think about it to conceptualize what we want to add to that or things we want to build on.

When we do get together and do a long writing weekend or practice, when we actually start rehearsing it live is when we start pooling all our ideas together and talking about it. When it comes time to actually record, by then, we’ve had the song for weeks, or months, and have had the time to think about new ideas. It’s like layers going on top of each other until we have the final version of what we put out.

How do you think your sound has changed since your last release?

GK: I would say the sound from our first EP that was five songs and had “Enzymes” on it was a lot more produced pop than this last record. Because we did it with Ryan Wasaba, it was more rock-informed and pulled from some of the things that he liked. When we were working with him and writing together, the full production process really changed how a song sounded, so it was formed differently.

That’s why us working together on some things without Ryan or figuring out who the next producer is always kind of changes what the sound becomes, and we mature through that. I guess we explore new sonic highways. I think that this record, and definitely the song “How to Talk,” shows that.

What was your favorite part about making this EP?

RP: I think the camaraderie. Just the thought of going into the weekend with a blank canvas. What’s going to come out of this weekend that we’re meeting in St. Louis? There’s a little pressure because we’re each driving out here and investing in this weekend.

We’ve got to get something out of it, but it always works out in the end. We always get something good. I think the other fun part about it is the song that you didn’t think is going to be that fun turns out to be the single. With “Sweet,” we didn’t have expectations of what it was going to be, but we came out absolutely loving it.

GK: I think that was the first one that we finished in the studio.

CS: I think it was the easiest.

RP: We were like, “Let’s just get this out of the way to work on the other ones,” and then we were like, “Wow, this is really good.”

QM: One of the cool things for that song is that Foxing records there, and they had a space downstairs where they had some synthesizers we were able to use for our record. It made it sound very ’80s. 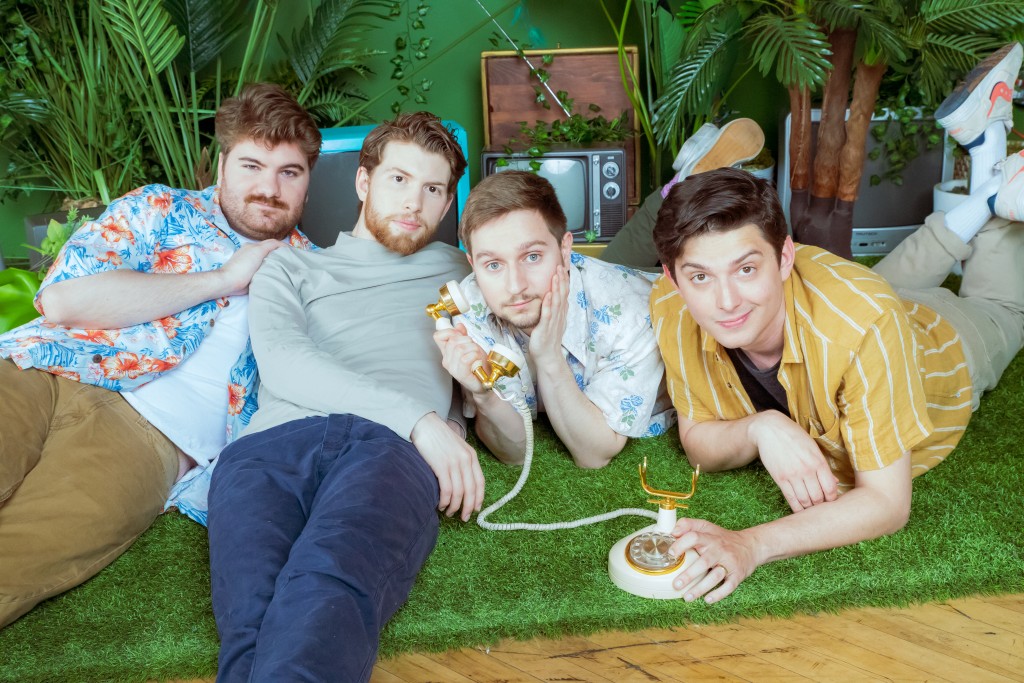 What’s your favorite song on the EP, and why?

QM: It’s probably “Sweet.” It was just a really fun song. It was fun to write; it was fun to record; every single time we play it live, I always have a blast with it. I’m not sick of it yet. Given time, I might get there, but it makes me feel good.

RP: I think for me, it’s “My Kind of Cool.” I know Garrison doesn’t like that because it’s the same four notes for him, but that’s what I liked about it—how simple it was. I remember the first time Cooper played it for us, and I was like, “Wow, this song hits!” He showed me a demo or something, and it was really dancey and felt good. There are also a lot of smaller, intricate guitar parts that we were able to sprinkle over it.

GK: “Couldn’t Be Anybody Else,” probably. Sorry to steal the two singles. We started writing this one before Ryan joined the band in Omaha. At the time, Cooper was in Kansas City, I was in Chicago, and Quinn was in Omaha. We met Quinn at this little ramshackle practice space in a  basement…

QM: It was the basement of a music venue where I was renting the practice drums.

GK: It was four cement walls and cement floors, so it was very echo-y. We played the song and kind of changed the chords. When Cooper first wrote it, it was almost like a Beastie Boys track.

GK: He was kind of rapping, and then it evolved. We put some chords around the lyrics and the melody that he already had. It came together, and it’s a really powerful song.

I think being in the band is super important to all of us, and it feels like being a brother to these guys. You kind of hate them sometimes, like driving in the car for eight hours with Ryan back and forth—there are times I want to kill him. But I love these guys. They mean the world to me, and that’s what I think that song is about.

CS: I’d say “How to Talk” is my favorite because it was the first song I wrote seven years ago, and it was awful. It sucked, and I thought it was never going to go anywhere. I showed it to the band two years in, and it wasn’t at any stage to be ready and needed some workshopping. It’s nice to see something that takes so long actually work out in the end. All of them are special to us in a certain way.

What has been your favorite part of your journey as a band?

CS: I think it’s really cool to look back at 2016 and 2017 and see the music that we all wrote collectively and how we’ve moved on and grown up. Adding Ryan to the band has been such a blessing. He adds a new element to the sound; he’s a very good guy. It makes it a lot more fun.

Plain and simple, we’ve gotten better. We’ve gotten more into the music. Looking back at the stuff we used to write, it’s hard to listen to now. It’s not the music I listen to. So it’s fun to play our music now and say, “This is actually good. I actually enjoy listening to this.”

QM: When we were recording “Enzymes,’ for example, we were adding all this synth stuff and things that we had never really played with live. We were asking if it was true to us, but then we thought that might be how we would sound in two years. And now we do, and I feel like we can pull that stuff off. We played “Enzymes” last night, and it sounds like it’s off the record. That’s something we’re all really proud of as far as our evolution as artists.

GK: It felt almost wrong to start playing and really diving into that when we first recorded “Enzymes” and changed our name to Jean Claude and the Eclairs. It felt like uncharted waters, and now we’re swimming. We haven’t gotten out of the pool yet. That’s what the Eclairs are.