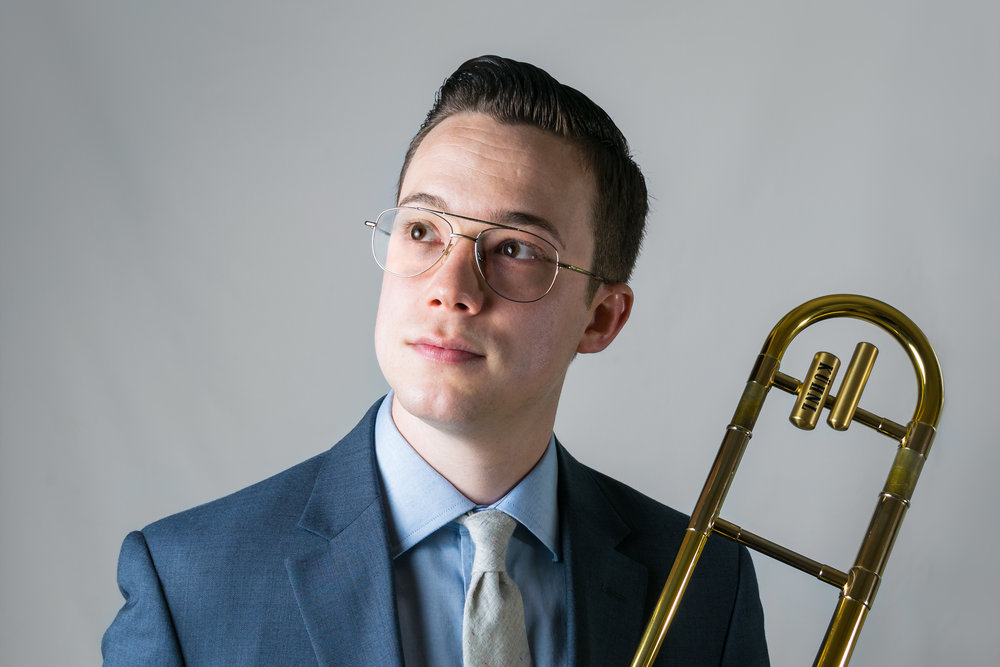 Earlier this month, trombonist and composer Brian Scarborough released his debut album, Sunflower Song, through Outside in Music. The nine tracks on Sunflower Song are beautifully-composed, fully-realized jazz numbers which continue to further Kansas City’s jazz scene, while fitting solidly within its traditions on tracks like the groove of “Ok, Here We Go,” the stretching out of “Tick Tock,” or the energetic jitterbug energy of “I Tolerate You.”

In addition to Scarborough on trombone, the ensemble on Sunflower Song is a veritable who’s who of the KC jazz scene: tenor saxophonist Matt Otto, guitarist Adam Schlozman, bassist Jeff Harshbarger, and drummer Brian Steever. Several of these folks have notable groups of their own, and hearing them all come together on this project is nothing short of impressive, especially when Scarborough told me that this music wasn’t all necessarily composed for this particular group.

“My quintet has been around for a while in various stages,” Scarborough says when we speak by phone. “I’m with some different personnel at different times, too. When this collection of players played together the first time, it was just very memorable. It was just worked so well and the way that they played the music and communicated was on such a high level, it just resulted in a performance that I was really happy with.”

That kind of fueled the fire a little bit, Scarborough continues, explaining third to half of the pieces on Sunflower Song were composed with this particular version of the band, but even with the older material, the composer feels like this lineup was able to bring in fresh ideas.

“I think they were just able to elevate the music to another level,” says the composer. “Through their own musicianship, but also through their communication with each other, I think this group is pretty good at knowing when to ask and when to just take the risk and go for it so, in performance sometimes, there’s some great things that happen that I wouldn’t expect but they’re organic and they’re they come from such an organic place that it really elevates the music in a very unique way and I really enjoy that.”

Hearing the interplay between Schlozman and Harshbarger at the beginning of “Ok, Here We Go,” or the manner in which the band slowly grows together over the course of the title track, it’s only too obvious that Scarborough has definitely happened upon a great combination of individuals. However, “happened” might be a little too reductive, given the fact that the composer and trombonist has been playing around the area since he was in middle school.

Thanks to an older brother–also a trombone player and, like Scarborough, a music instructor–who played in school, Scarborough grew up going to his sibling’s jazz band concerts.

“It was always fun to go to those concerts,” the musician remembers. “By going to those concerts, I got kind of familiar with the music but he also would share recordings with me or different things–tips and information–which started my interest in jazz, and then started doing the jazz band in middle school and doing jazz camps and those sorts of things, and that’s where my interest kind of continued to grow.”

Over the years, Scarborough would play in community jazz big bands and local musical theater companies, as well as at the New Theater Restaurant, all of which he attributes to building his love for a challenge.

“It was working really fast trying to get your learning chops up to where you could get the music learned quickly and figure out how you fit into the ensemble,” Scarborough recalls. “That’s something that I’ve continued to enjoy: whether it’s the challenge of doing a show for three and a half months, eight shows a week or maybe a weekend or two, I really enjoy the challenge of, you may have been playing the show for six weeks or whatever, but the audience is seeing it for the first time, so you have to bring that same kind of fire and energy to every performance.”

While Scarborough grew up in Kansas, attending school in Shawnee Mission, graduating from the University of Kansas in 2013 with a Bachelor of Music in Trombone Performance, and now serving as the Adjunct Instructor of Trombone and Low Brass at Kansas City Kansas Community College, the title of his new album isn’t a direct nod to his time at KU, although he did play in the marching band his freshman year.

“I kind of forgot that you make the big sunflower and do the high march around it and everything,” the musician says with a laugh when I bring up “Sunflower Song” and its status as one of the Marching Jayhawks’ bigger fight songs. “I wrote this tune and it just felt like, ‘Oh, that’s a nice. It’s a nice song title,” and then I got a ways into it, a few months later and I was like, ‘Wait a second …’ So, that was definitely an accident but maybe, subconsciously, it’s there.”

There are actually several meanings behind the title, Sunflower Song, Scarborough explains, with a big meaning and some smaller things, as well: “For me, it’s just the fields of sunflowers that come about every fall. When you get a good crop of sunflowers, it’s just like jaw-droppingly beautiful so, for me, that was the inspiration.”

Also, even though the composer spent a little bit of time in Chicago attending DePaul University, where he earned his Master’s of Music in Jazz Studies and did the Disney All-American College Band in California, as well as living in a few other places, he still feels like Kansas is home to him.

“The sunflower being so tied to the state of Kansas, it just felt appropriate to title [my first record] in such a way that was reflective of my surroundings,” Scarborough concludes.

You can check out Sunflower Song on Spotify or purchase it on compact disc directly – and autographed! – from Scarborough himself.