Jazz in jeopardy: City-owned dangerous buildings at 18th and Vine sit in limbo 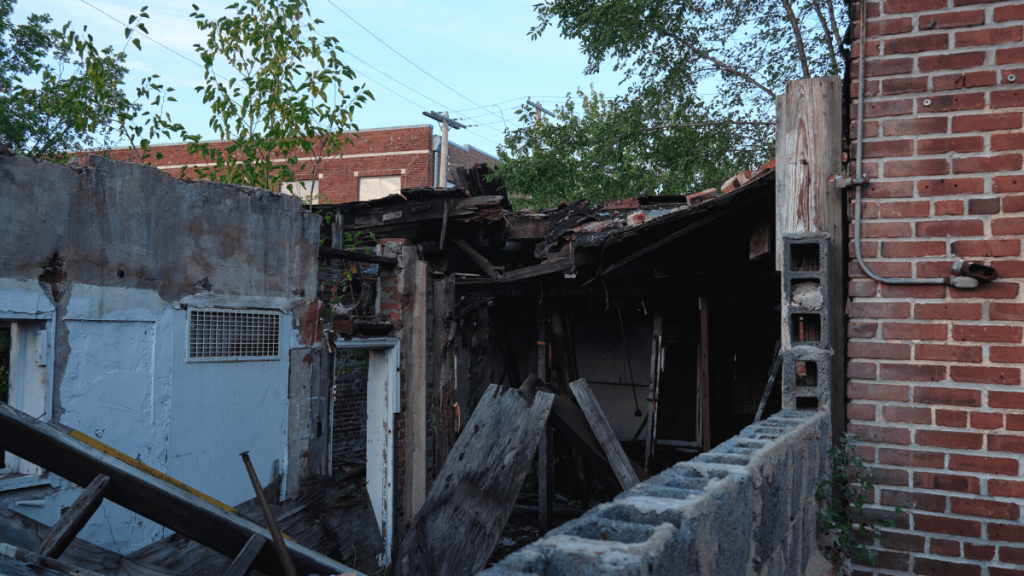 The dangerous building on 1814 Vine Street has lost most of its roof, and collapsed wooden boards cover the interior. // Photo by Dominick Williams/The Beacon

In the shadow of an apartment building, on a block in Kansas City’s historic 18th and Vine Jazz District, sit four dilapidated, crumbling buildings — shells of the vibrant storefronts of their past.

The owner of these four dangerous properties in the 18th and Vine district? Kansas City, Missouri.

More than 360 properties in Kansas City are on the dangerous buildings list, meaning they must either be fixed up or demolished. An analysis by The Kansas City Beacon found that a majority of these properties are concentrated in neighborhoods located east of Troost Avenue, a historic economic and racial dividing line in Kansas City. That’s the case with the city’s dangerous properties, located on a block bordered by 18th Street on the north, 19th Street on the south, The Paseo to the west and Vine Street to the east.

The Beacon obtained records for the four dangerous properties through a Sunshine Law request. Collectively, the documents offer a deeper look at the buildings’ troubled histories.

In recent years, Kansas City officials have put a plan into motion to develop and improve the 18th and Vine district, which includes the American Jazz Museum, Negro Leagues Baseball Museum and the Gem Theater, and which historically was a center of Black economic growth.

The dangerous buildings on the 1800 block of Vine Street were part of that history. One was the House of Hits, home to the office of the Kansas City Monarchs baseball team in the 1930s. The building at 1816 Vine St. was home to the Security Loan and Investment Association.

But now, Kansas City Councilwoman Melissa Robinson said, the city-owned buildings represent a problem. She is pushing for funds to rehabilitate the buildings in cooperation with private developers.

“If that’s what we’re known for on the world stage — where people from all over the globe are coming to Kansas City to go to the Negro Leagues Baseball Museum, to go to the American Jazz Museum, to visit the Mutual Musicians Foundation — and they have to walk past these blighted buildings, it says a lot about our city in terms of, we’re not matching the rhetoric that we’re espousing about it,” Robinson said.

To develop or demolish historic buildings at 18th and Vine

The historical significance of the 18th and Vine district is the reason the buildings are standing in their dilapidated condition.

The district is on the U.S. National Register of Historic Places as well as the Kansas City Historic Register. That means federal tax credits could be available for renovations, but also that the projects must meet national and local historic preservation standards.

“Could we probably knock them down? Would it be easier? Yes,” said John Baccala, spokesperson for Kansas City’s Housing and Community Development Department. “But if that happens, any type of historic preservation tax credit money is gone.”

Making significant changes to the structures can effectively end their historical significance or get them removed from the historic register.

“The buildings that the city owns on 18th and Vine are really just shells of buildings, I think everybody knows that,” Baccala said. “But the whole purpose of keeping them intact is because of the historic nature of the 18th and Vine district.”

Kansas City took ownership of the four buildings in 2017 after the City Council passed legislation the year before approving an improvement plan for the 18th and Vine district. Having the city assume ownership of the dangerous buildings on the 1800 block of Vine Street — so the structures could be stabilized and, later, developed — is part of that plan.

“It’s always a challenge with older buildings,” said Bradley Wolf, the city’s historic preservation officer. “Ideally, you want to get to them before they’ve deteriorated too much.”

Some historic buildings, like those renovated for residential lofts, have more wiggle room for restoration. While builders might keep the exterior of the building largely intact and leave historic pieces of what was housed there before, bedrooms and office spaces can be reconstructed however they see fit. Smaller buildings, like the ones in 18th and Vine, present a more complex issue.

“Even though they may seem like simple commercial buildings, they have cultural significance to Kansas City’s African American community,” Wolf said. “So trying to preserve as much as possible that character of the block is really important in interpreting that history.”

Business owners in the area are tired of waiting for promised improvements. Henry Service, a lawyer who owns the historic Lincoln Building, is suing the city and the Neighborhood and Housing Services department for failing to maintain the buildings under its care.

In his lawsuit, Service points to a case the city brought against another business owner in the area. The city asked for the building to be designated a nuisance property and given over to its control, citing several violations of city ordinances. Service said the city-owned dangerous properties violate the same ordinances, but no action has been taken to repair them.

Dan Smith is the co-founder of The Porter House KC, which provides entrepreneurial resources and support for underserved communities. The building Porter House leases sits across the street from the city’s dangerous buildings. Smith said that while the community would like to see the buildings developed, their historic status can scare away potential investors.

The clock is ticking for the dangerous buildings

The buildings near 18th and Vine can’t stay in limbo forever. Records show that over the years, each address has continued to rack up damages. In 2017, a fire burned through two of the city-owned buildings, started by an unhoused person trying to keep warm.

“Now that the city is in possession of the buildings, we want to see redevelopment move forward at a timely pace,” Wolf said. “The longer they sit, the higher the chance they completely collapse.”

In efforts to develop the 18th and Vine district, the Kansas City Council voted in 2016 to allocate $7 million for projects in the area. It’s part of a larger three-phase plan that costs $27.6 million. By now, that $7 million has been spent, according to Robinson, the council member who represents the district.

As part of phase one, the city finished stabilizing and preserving the historic structures located on the 1800 block of Vine Street. A 2018 report states the buildings on this block are ready for redevelopment.

Robinson has advocated for repairs to the city’s blighted buildings since she took office in 2019, and she’s starting to see progress.

The city is in talks with two private developers, she said. If the plan moves forward, they will transform the city’s blighted buildings on the 1800 block of Vine Street into a mix of residential and commercial space. Initial plans include 54 units of multifamily housing, along with 28 parking spaces. Robinson said there’s currently an $8 million funding gap for that project.

Efforts to restore the buildings have been met with resistance by some council members in the past. They wanted to see private investment before approving public funds. Now, with developers willing to invest, Robinson hopes the council will approve the additional $8 million needed to make the plan a reality.

Keeping the historical spirit alive on 18th and Vine

As 18th and Vine develops, Robinson said, it’s important to ensure it doesn’t result in gentrification and displacement of Black residents and Black businesses.

“Eighteenth and Vine has historically been compared to the Black Wall Street of Kansas City, in that it was a space in which African American entrepreneurs could have access to the economy through entrepreneurship,” she said. “We’re trying to just make sure that there’s not a displacement and unintended consequence.”

Smith, with Porter House KC, said he’d like to see area residents have a stronger voice.

“You start seeing nicer buildings come in and things change, which aren’t always a benefit or in favor of the folks in the community,” he said.

Robinson said the city should focus on the 18th and Vine district with the same intensity that officials supported the Power & Light District downtown and other development projects.

“It’s time for us to have laser focus on building the economy and bringing 18th and Vine back to its glory,” she said.

This story was originally published by The Kansas City Beacon, an online news outlet focused on local, in-depth journalism in the public interest.