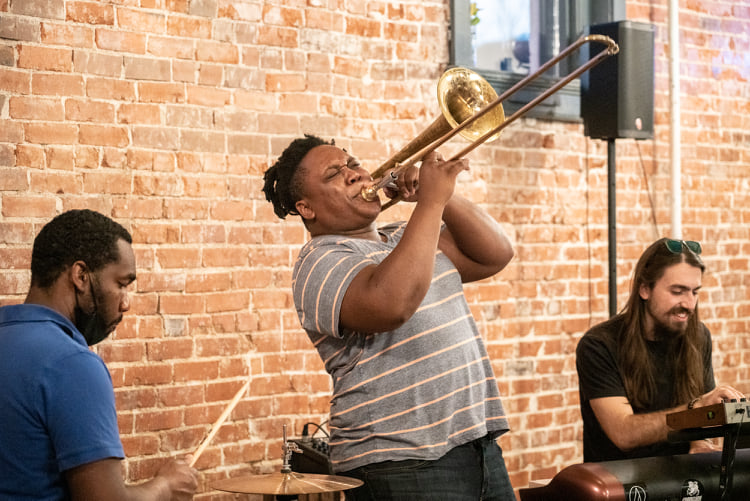 Rapper, jazz trombonist, and anime fanatic Ryan Jamaal Smith—better known as Kadesh Flow on stage—and I met up at a coffeehouse to answer some questions about his latest album, Room Service 2. The album—composed of 13 tunes by Kadesh, features local artists including Trevor Turla and Marcus Lewis, eye-opening verses, and funky trombone licks—will leave you excited for more.

Kadesh confided that he was nervous about the album release because of how vulnerable the subject matter was to him, but has been pleased to see the positive reception.

“This was me writing my way through 2020”, he explained. “It was cathartic writing the songs, but releasing them was not comfortable at all.” 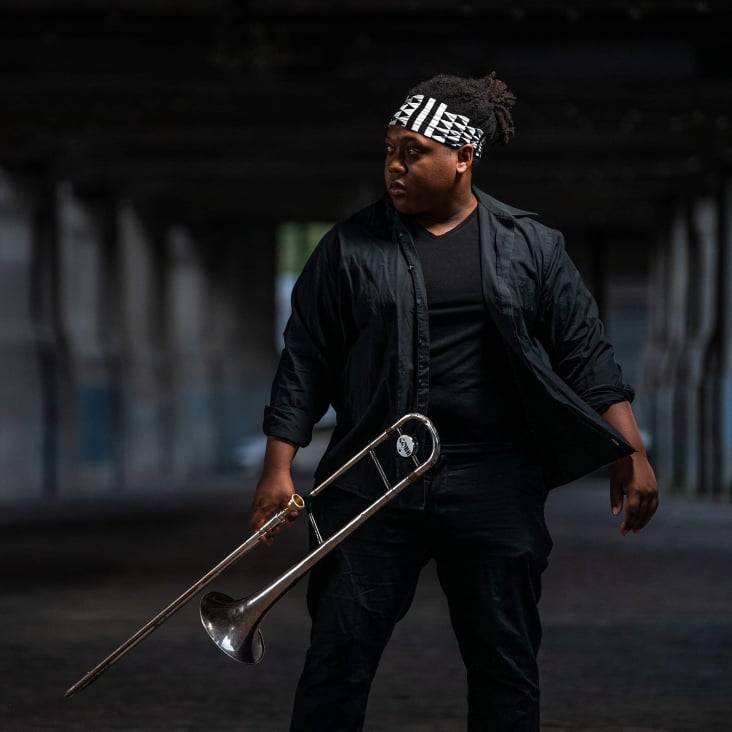 The Pitch: What was your inspiration for the album?

Kadesh Flow: The initial inspiration was for [Room Service 2] to be a sequel to Room Service, which I wrote in a hotel room at MAGfest 2018, a music and gaming festival in Washington D.C.. A lot of my life seems to hinge around this festival. The festival was a break open point for me, when I started to take myself seriously as an artist. It was my third time main staging this festival and I was six months into having quit my financial tech job to pursue music full time. I was terrified.

When did you start on this album?

At MAGfest 2019 we wrote the title track, “RS2,” beats and everything, but then realized we wouldn’t have time to do the rest of the album then. I tabled the project, but then picked back up at the next MAGfest [2020], right before the shutdown.

I really did most of the work between late February 2020 through late December 2020, and then I tightened up and refined some things between January and July 2021.

A lot of times, my writing process is me kick-starting myself. There are times I’ll have a song concept and I’ll just write it; that happens a lot. I picked 13 songs out of 48 for Room Service 2. About 10 were unfinished, and then another 20 or so I’ll do something with at some point, or for my weekly anime rap content on Youtube. I initially started that in grad school, but I pivoted back towards this content during the shutdowns. A lot of the anime content I write is character-based; it’s reflective of my life and I really dive into how the character relates to me.

If I don’t have a concept right there, I’ll spend the day trying to put myself in a position to be inspired. I also do a lot of stream-of-consciousness writing. I let whatever I’m thinking come out. The jazz trombone side of me hears cadences between bars. I’ll have a dope bar, but if I don’t have a lead-up or follow-up to it, then I like to fill in the blanks with the trombone.

I see you’ve collaborated with a lot of artists, many of them local, for this album. Could you tell me more about these collaborations?

I didn’t want to collaborate with anyone locally until I had rock-solid relationships. I owe a lot between Brass and Boujee with Marcus Lewis and The Fantastics with Kemet Coleman. Between being in those two ensembles, I have a lot of relationships with really phenomenal musicians here. Four or five years ago I would have never thought I could’ve gotten Marcus Lewis and Ryan Hiline on an album of me wrapping. Trevor [Turla] is my trombone bro. Last year, he’d come over and we’d just jam in the basement. The Epitome is a dope MC here, he holds down the nerdy trap vibe. Andrew The Only is actually the person that inspired me to start performing as a rapper and taking my performances seriously when I was a sophomore in college. He’s on the squad that worked on the album that we call the Enclave, with two guys out of Atlanta, Atlas and Bill Beats. All of these collaborations were with people I’m very close with. I could just hear certain people on the tracks, Ryan on “Take Backs,” Marcus on “I Smile,” Trevor on “Whiskey in My Coffee.” It just worked out that way.

Do you have a favorite track?

I don’t think I have a favorite yet, but there are a few really special tracks on the album.

When I wrote “Take Backs” I was feeling really down, and I could just hear the trombone intro in my head. It was around this time last year. Julys have always been weird for me – I always have a lot of emotional turmoil. 2020 was looking like a breakout year for me, but then my income went away. I was really regretting listening to my inner-self and inner-artist for taking the leap and leaving my full-time job. My former partner and I were fighting for our relationship. You can all hear that in the hook and the verse, but I could just hear Ryan on this track. Then, Ryan was violently attacked and incapacitated the same week we were going to record; he could have died. I didn’t think I could write another verse. It was too much, and that’s rare for me. I said “this song isn’t going to exist without Ryan.” So, I let it sit there, and then he recovered. Everything about this song is a lot.

“Cry for Me 2” is also really special. Cry For Me 1 [from the album Room Service] was a content rap inspired by Fullmetal Alchemist: Brotherhood. I released it when my ex and I started dating, and it was the first anime we watched together, and really the first impactful thing we watched together. “Cry for Me 2” is a content rap, a ‘lamenting the fact that we aren’t going to be together anymore’ song, still loosely referencing Fullmetal Alchemist. 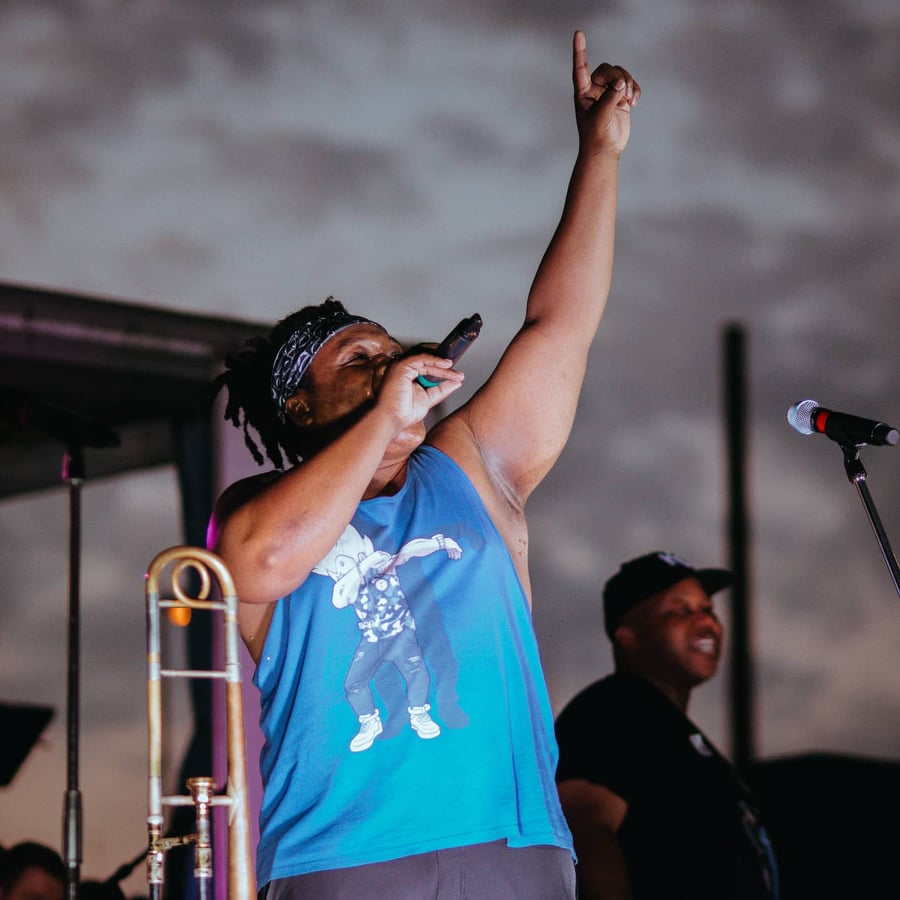 Do you consider yourself under the umbrella of ‘jazz’?

Yeah, absolutely. Everything I’m doing is a child of jazz. It’s happening in greater hip-hop, where a lot of the successful producers are either classical or jazz trained musicians, making the beats. I’m just composing stuff that’s streamline and maybe a little bit more accessible than more straight-ahead stuff. The bottom line is that Eddie Moore, Ryan Heinlein, Peter Schlamb, and Matt Villinger – we’re all different faces of jazz. We’re pushing our original music. That’s the future of Kansas City jazz. The clubs want to hear music from, for the most part, dead people. It’s fascinating to see that, because when these people were alive they were dangerous and intimidating. That cycle, especially with Black American music across genres, is perpetual. It’s safe when they’re old or dead, but the stuff that’s happening now, the stuff that people may or may not be writing about in 20 years, is the same stuff that people don’t want to hear in clubs yet.

Some of the greatest rap albums that ever happened are influenced by jazz, from Kendrick Lamar to Chance the Rapper. It’s only not obvious if you’re not paying attention.

Was most of your album written, recorded, produced, etc. in isolation?

The overwhelming majority of the album was written, produced, performed, recorded and mixed down in my old basement that was shared with my ex-partner. It really got intense. The majority of the songs are written after May 2020, partially because I had a really strong one-on-one with my mom. She apologized to me for some stuff that really outlined the roots of some issues I had been dealing with that I didn’t realize were so serious. I started tracking that and working on that, but I was already trying to work on myself anyway. In the midst of doing this work, a lot of it was processing.

More immediately, a lot of “content” songs for YouTube. I’m taking a couple weeks off from Youtube, but I do have some songs I’m sitting on. I’m also working on some feature verses for other artists.

Long term, I’m working on a project that’s based on my relationship with my ex from college ending, The Last Excuse. This was the last excuse I had against taking myself seriously as an artist. When I realized we weren’t going to work, I realized I didn’t have any excuses left. The project has been in limbo since 2015, but I’m finally ready to do it. I don’t know when I’ll release it yet, but probably within the first two quarters of 2022.