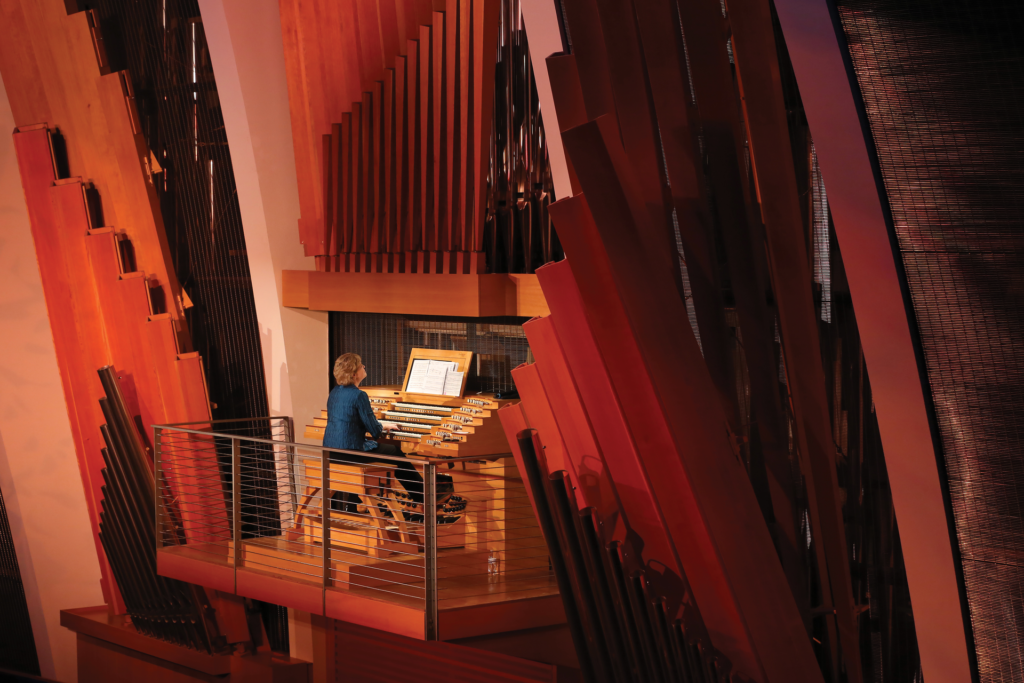 Some of us lack the coordination to drink coffee without splattering drops down the front of our shirt. Jan Kraybill, on the other hand, can regularly be found operating a 40-by-60-foot instrument that requires her to push and pull knobs while manipulating four keyboards and a pedalboard and perform like a virtuoso pianist, all at the same time.

Kraybill serves as organ conservator for the Julia Irene Kauffman Casavant Organ, Opus 3875 — the dazzling, custom-built organ inside the Kauffman Center for the Performing Arts’ Helzberg Hall. She’s also organist-in-residence at Community of Christ in Independence. And Kraybill collaborates with some of KC’s finest groups: Kansas City Symphony, Kansas City Chorale, Te Deum, and Bach Aria Soloists. She’s busy, but emits a high-decibel energy, motoring between venues on her Harley-Davidson. And she’s adored: this year, some 700 attendees turned up for her 20th annual Super Bowl Sunday recital.

On Mother’s Day, the Kauffman Center will host a special concert featuring Kraybill on solo organ. It’s a celebration of the 25th anniversary of the Muriel I. Kauffman Heart Center at St. Luke’s Hospital as well as a tribute to Julia Irene Kauffman — the daughter of Muriel, who saw to fruition her mother’s vision of a landmark performing arts center in Kansas City.

The May 12 concert, designed by Kraybill, is all about love.

If you’re just now hearing about this concert, bad news: it sold out within two hours. But not to worry: Kraybill has two more shows in town this month.

The afternoon of May 5 is Bachathon XL, the 40th annual celebration of Johann Sebastian Bach, one of the world’s most revered organists. The show, which is at Grace & Holy Trinity Cathedral, has a casual vibe and features performers rotating in every half-hour.

“I decided to go further afield and explore some lesser known works by Bach,” Kraybill says.

Bach, a Lutheran, never left Germany, but was inspired by French, Italian, and Catholic traditions. Kraybill’s selections show “Bach’s ability to absorb and then emulate the best music of his time,” she says.

Then she’s back at Helzberg Hall on May 28 for “Organ Extravaganza,” the last installment this season for the Kansas City Symphony’s popular Free Happy Hour Concerts.

“It’s an extravaganza, so we have to celebrate this instrument for all that it can do,” Kraybill says. “By the end of the program, I will have played nearly every pipe in this organ.” (There’s one bird-song sound effect that she just couldn’t fit into the hour-long program. Maybe for the encore?)

With an instrument that boasts 5,548 pipes, that’s a lot of variety. The biggest pipe is 32 feet tall — as tall as a flowering dogwood, the state tree of Missouri — and weighs 960 pounds. The smallest pipe is no bigger than a pencil. Sitting in Helzberg Hall, Kraybill estimates, you can only count about 100 pipes. The rest are hidden behind the vaulting metal screens.

Along with works featuring KCS trumpeter Julian Kaplan and cellist Mark Gibbs, the Helzberg Hall concert includes a transcription of Pyotr Tchaikovsky’s “Coronation March,” featured on Kraybill’s latest album, The Orchestral Organ. Released May 7, it’s her sixth album, including the Grammy Award-nominated album of Camille Saint-Saens’ Symphony No. 3 “Organ,” with Kraybill as soloist.

Organists often operate in secret, hidden away in organ lofts or obscured by choirs. In the case of Helzberg Hall, Kraybill’s back faces the audience. From across the hall, it’s hard to see what all she’s up to, even as the music envelops your body and rattles your bones. From time to time, though, Kraybill is able to do demonstration concerts, usually at Community of Christ, which has two instruments: the Temple Organ (5,685 pipes) and the Auditorium Organ (6,334 — but who’s counting?). You can catch her there on June 4.

“I love helping people understand the mysteries of this wonderful musical machine,” Kraybill says of her organ adventures across the city. “And I’m buzzed about Kansas City. I’ve been here since ‘86, and I’ve seen the city go through all sorts of ups and downs. This renaissance that we are in the middle of is so glorious.”