Jamie Arnold, owner of GlassBandit, says he’s the “Guy Behind the Bar” at the Soccer Lot in The Pitch Questionnaire 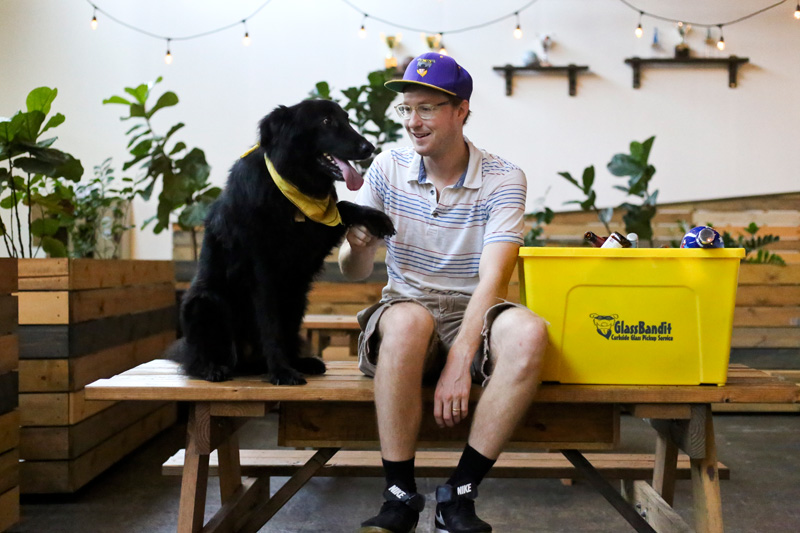 What I do: GlassBandit provides glass-recycling pickup for residential houses (curbside), apartments, condos and businesses.

What’s your addiction? E-mail. I can’t stop checking my e-mail.

What’s your game? I love to play soccer. You’ll find me at the Soccer Lot about four nights a week.

What’s your drink? I’m a big fan of Great Lakes Brewing Co., out of Cleveland, particularly their Dortmunder Gold. They don’t distribute to KC yet, so I pretty much have to smuggle it back anytime I come across it.

Where’s dinner? Between having a 4-month-old and a part-time night job, dinner is usually at home. We do love Voltaire, Garozzo’s and the Farmhouse for special nights out. My wife also lives off Lulu’s, so sometimes I’m lucky to get the scraps.

What’s on your KC postcard? I love that picture from Liberty Memorial when it looks like the world is about to end. Sure, it’s not the most inviting, but it makes KC look pretty hardcore.

Finish these sentences: “Kansas City got it right when …” They perfected barbecue. It’s so good and good for you.

“Kansas City needs …” Mini golf. Parkville is cool and all, but can we get a course in the metro?

“As a kid, I wanted to be …” Albert Belle or Emmitt Smith.

“In five years, I’ll be …” Working on GlassBandit still. If all goes right, I’ll have more customers and a few employees by then. I am actually looking to hire someone soon if anyone is interested and is comfortable behind the wheel of a short bus.

“I always laugh at …” What Nathan Fielder is doing. He’s a socially awkward adviser for small businesses. His ideas are ingenious and absolutely terrible at the same time.

“I’ve been known to binge watch …” Mr. Robot, as of late. It’s as if Fight Club and Dexter had a baby and it was some strange computer-hacking man.

“I can’t stop listening to …” Vulfpeck. I’ll listen to them all day, every day. Look them up and thank me later.

“My dream concert lineup is …” The Band, Talking Heads and Gorillaz. I realize it’s a strange lineup.

“I just read …” Sprawl and Politics by John Frece.

What’s your hidden talent? I got mad skills on Microsoft Paint.

What’s your guiltiest pleasure? I’ll watch First Take on ESPN. It’s total trash. I can’t ever make it through an entire show, but I still manage to put it on at lunch.

The best advice I ever got: “Treat others the way you would like to be treated.” My mom drilled that into my head at a young age.

Worst advice? “Exchange your Euro with me, and I won’t charge you the fees they have at the currency exchange.” This would’ve been good had I received the right currency.

My sidekick? That would be my dog and GlassBandit mascot, Nancy.

What is your spirit animal? I don’t know. A buck? Let’s go with buck.

Who is your hero? Matt Stone and Trey Parker share this spot. I rely on them way too much to help put current events into perspective for me, but they seem to nail it every time.

Who is your nemesis? Bret Michaels Bad Boyz. Think if the Death Star was an indoor soccer team, that’s them. And of course, they beat us in the finals for the first ever GlassBandit Classic, but I’m not bitter or holding any kind of grudge. Nope. Not one bit. Not at all.

My favorite toy as a child: Teenage Mutant Ninja Turtles. I had a lot of them plus the Technodrome, which Santa’s elves never really figured out how to assemble.

My dating triumph/tragedy? I went on a first date in college that only lasted 30 minutes. That was with my wife. Triumph!

My brush with fame: I’ve been to one NHL game in my life. I sat in a suite, saw a fight and penalty shootouts, and I met Wayne Gretzky. Why go to another game again? It will only be a disappointment.

What was the last thing you had to apologize for? Tardiness. Since my kid is not old enough to defend herself, I usually blame her.

Who’s sorry now? Anyone that’s ever told me I would not amount to anything more than a janitor, garbage man, bus driver or bartender. Well, guess what? I’m all of those things, so how do you like me now?

My recent triumph: Anytime I get an apartment or condo set up with GlassBandit, it feels like a huge win. Most recently, 51 Main has signed on with GB.