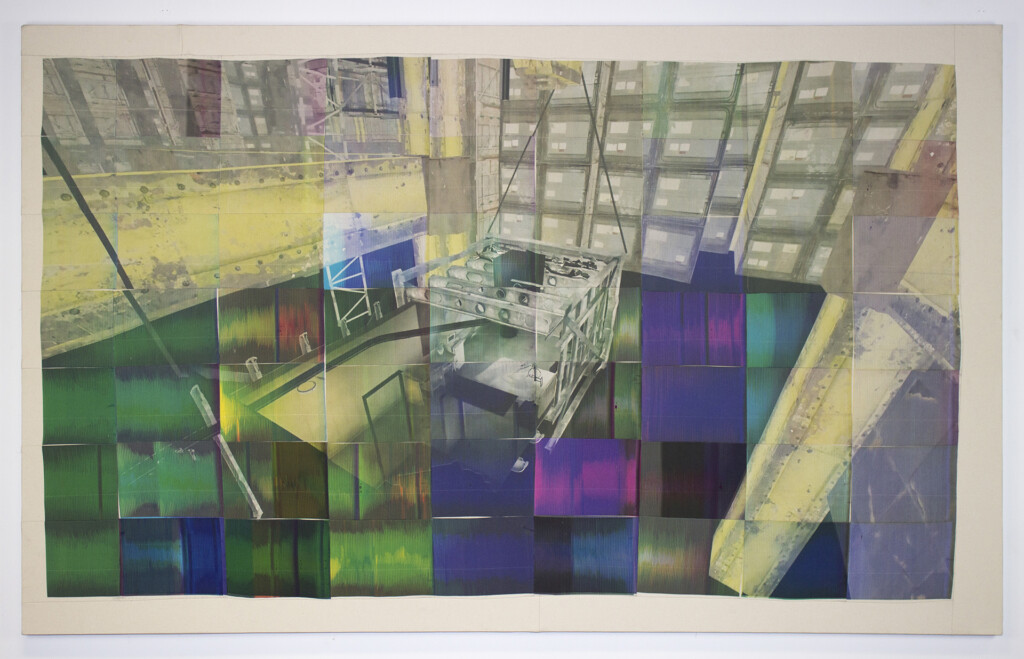 The pieces in his exhibition were created by feeding unprimed canvas through a standard printer and manually adding ink to alter the printed image. He then sews pieces of the canvases together to make a completed image. 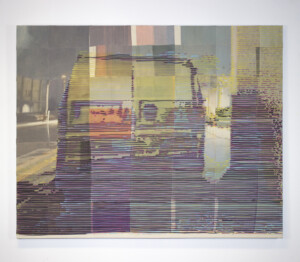 He says the process of taking something mundane, like a printer, and altering its function is part of the message he is trying to convey in his exhibition.

“My dad’s in finance, and my mom had a corporate job. So, I grew up hearing about problems or complaints with the work printer,” Daughety says. “I felt like this is what being an adult kind of looks like, and I’m remixing that idea.”

He uses landscape photos of buildings or vehicles as the starting point for each piece. He describes the editing process as a way to erase the perfect facade of each structure.

“The subject matter is typically presented to you like it’s an authority,” Daughety says. “It’s so digital, and it’s very clean and shiny and doesn’t really have the hands of someone as a maker in it.”

For some of his pieces, he used photos from Call of Duty: Modern Warfare (2019) to drive home the idea that there is more to a subject than meets the eye. Daughety explains that his use of images from this game comments on video games being used as military propaganda. 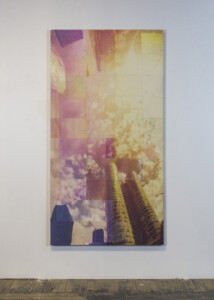 “I think it’s just kind of crazy to aim that at young people who don’t have a lot of solid access to information about overseas war crimes,” Daughety says. “I would like to present some of those images and have people question the motivation behind each one.”

Although the idea of stripping away appearance to find the intent is what drove his work, he is excited to see how individuals interpret everything.

Daughety is a Dallas-born artist living in Kansas City. He earned his BFA in Sculpture from KCAI in 2021 and has also done work in Chicago, Ireland, Philadelphia, and London.

“Jackson Daughety: MORE AUTHENTIC” will be displayed at Holsum Gallery Jan. 27-Feb. 26. The gallery is open by appointment, which can be made through direct message on the Holsum Gallery Instagram.