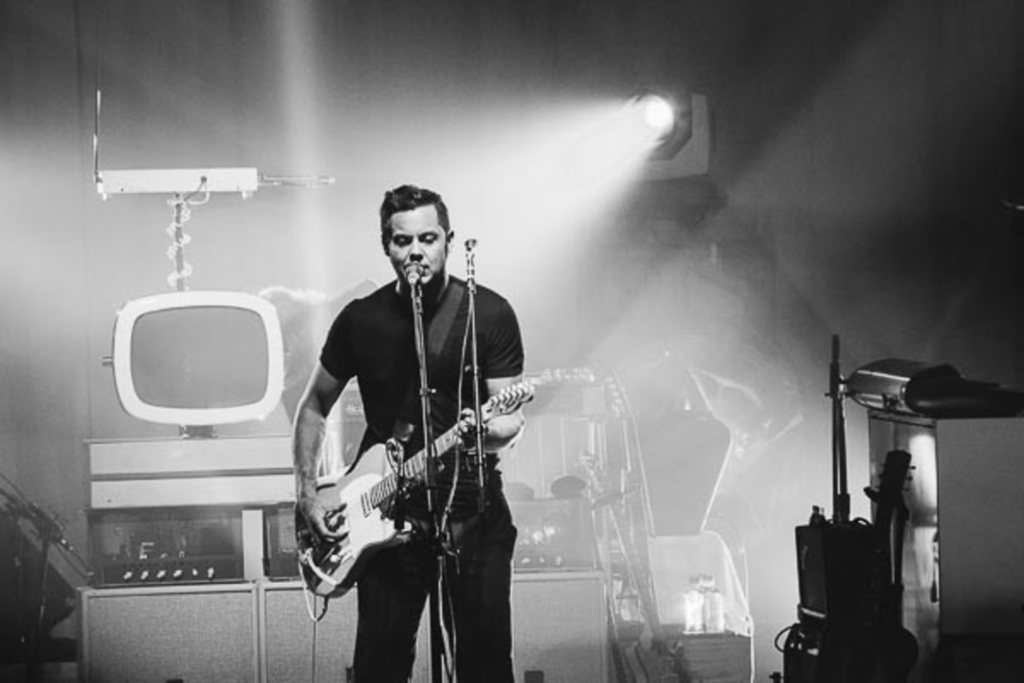 It’s hard not to be impressed with the expanse of Jack White’s 15-year career. White has released nearly 20 albums among three bands and now, at last, his solo work. He has produced for legendary performers including Loretta Lynn and Wanda Jackson. He has set up a record shop and label (Third Man Records). In a single song, his music may traverse across garage, country, bluegrass, metal and back. All of this is just the front page of his vita. And last night at the Midland, White showed us a little bit of everything, with a ramped-up fervor and intensity that reflect the man’s seeming genius and relentless hunger for music, its history and performance. He was, in short, masterful.

White selected Curtis Harding to open the show with some slow-burning blues. Curtis, whose voice is oddly reminiscent of Cee-Lo, is a graceful performer. He immediately charmed the audience with his band’s retro-soul sound and his manicured 1960s style. Standout songs included “Drive” and “Freedom,” from Harding’s debut album, Soul Power.

After a 45-minute intermission, a dapper announcer came out to ask people to refrain from indulging in overuse of their cellphones during the performance: “The show is not this big,” he said, pointing at the small screen on an iphone, “it is THIS big!” And he gestured to the entire stage, obscured by a long curtain as White’s band and roadies set up.

Once the curtains opened – with a furiously fast rendition of “Fell in Love with a Girl” – White did not let up from the frenetic, relentlessly driving performance for nearly two more hours. White’s guitar wailed with an impresario’s flicker and touch. Drummer Daru Jones looked in danger of crushing his drum set, as he stood over it, pounding the life out of his snares and cymbals. (He did later even flat-out break a cymbal.) 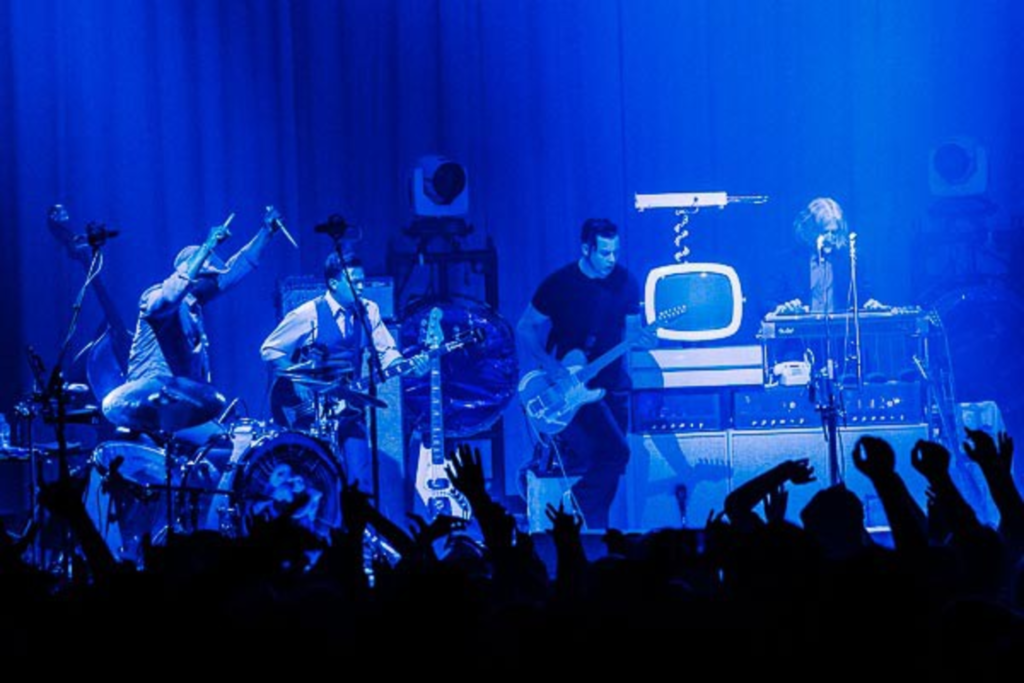 The stage setup harkened back to a White Stripes-era minimalism. It had no frills, just a few blue lights, smoke, and a retro television to broadcast what appeared to be the frequencies coming out of the instruments onstage. On top of (or behind) the television, a theremin was perched – used to great effect early in the show.

Speaking of the White Stripes, the set was surprisingly heavy with material from that band. White’s backing musicians are quite impressive performers in their own rights, and with the addition of these members, the White Stripes material was greatly fleshed out. This was greatly for the benefit of the live audience, but occasionally these early songs – as sometimes with White’s solo material – suffered from a lack of editing. It would have been impossible to count the number of guitar riffs and solos throughout the performance; there were dozens upon dozens. And while there is no doubt that White is one of the most important musicians to come around in the last two decades, it did feel, on occasion, that a little less noodling would have added up to a more cogent performance. 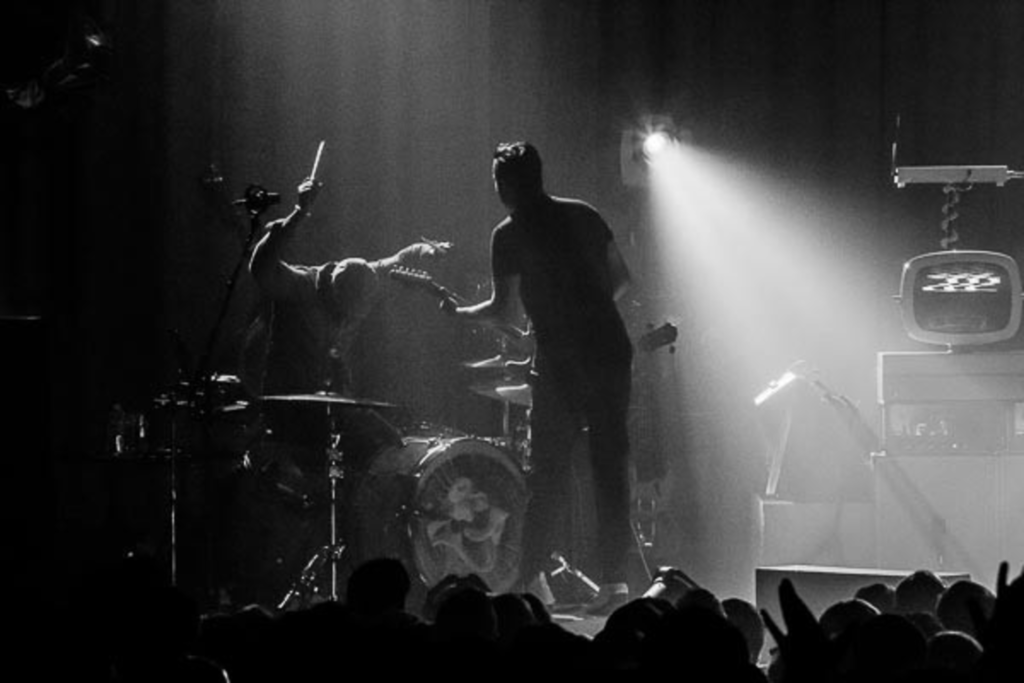 But the audience was thrilled with every moment. Everything that White asked the audience for – clapping, singing, dancing – its members gave back with blissful abandon. As the show went on, the songs bled violently into one another; by the second half, the music was heavier, louder and more expansive, almost operatic in its drama. White is clearly awash in the influence of Detroit and Nashville, aeffectively muddying the water with blues, garage and Americana. It felt like the audience was getting three or four shows in one. But despite all this genre shifting – and, yes, even with the somewhat superfluous riffing – White was brilliantly effective.

White and his band clearly love what they do, and last night had plenty evidence of that. What White is doing with American music is an effort that takes diligence and a lot of care, and his passion for his work is contagious; it transfers a burning desire to audience members to do something, to move. Steel guitars, organs and fiddles rang out alongside the theremin, keyboards and the frenzied, manic drums. Verbally, White communicated very little with the audience other than to praise the efforts of his band. Musically, he gave us everything. 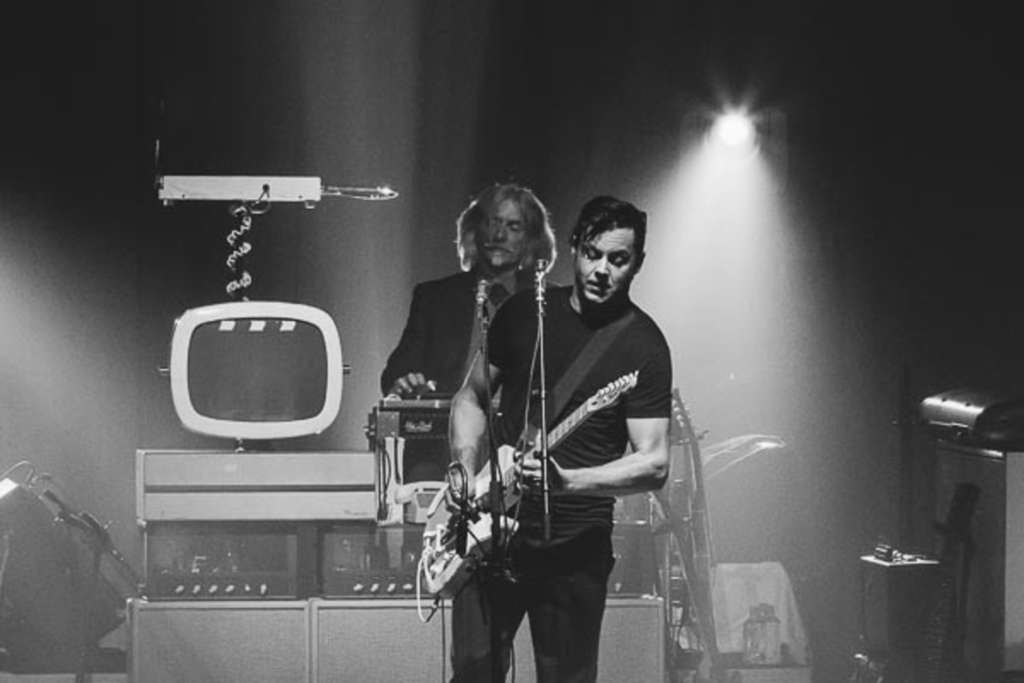 Leftovers: So, “Seven Nation Army” is now basically a sports chant or a crowd anthem. Fine. But it was super-weird last night, hearing it in its proper context, after hearing it chanted at KU basketball games and Sporting KC games.