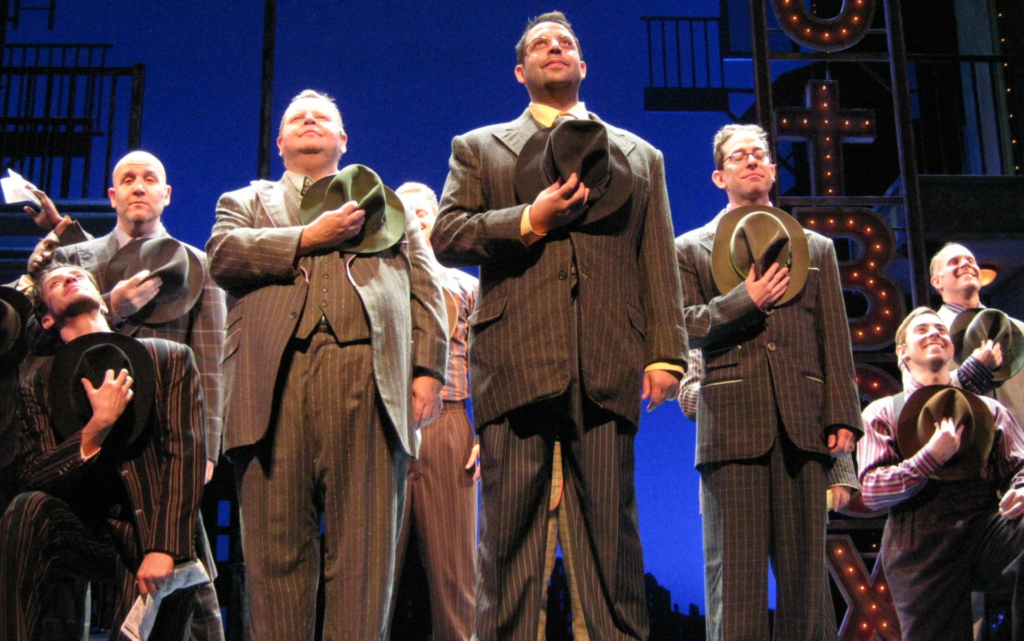 Has any couple onstage been more star-crossed than Sarah Brown, the
uptight Skid Row missionary with God in her heart, and Sky Masterson,
the upright golden boy with gambling in his heart? Unlike Romeo
and Juliet, whose families’ enmity makes their love
impossible, Sarah and Sky are separated by their own fundamental
natures.

And has any musical been more perfectly constructed than Guys and
Dolls? It’s so light, so sure on its feet, with Frank Loesser’s brilliant
music and lyrics and Jo Sweling and Abe Burrows’ rock-solid book so
witty and brassy and sometimes heartbreaking. It’s almost easy to miss how
every song is in the right place (and how many of them are classics),
how every character is so vividly established and worth rooting for, and
how every story beat rings like a bell, ding dong ding.

I was there Tuesday at the great burgundy-clouded, ominous-thundering,
lightning-crashing, gully-washing Guys and Dolls, when storms closed the show right after the title song (delivered with
panache to spare by the Laurel-and-Hardy duo of Garth Kravitz, as
Benny Southstreet, and Glenn Rainey, as Nicely Nicely Johnson). That
just means I got to go back the next night and see it all again from the
start. I’m so glad I did.

The angel-voiced Erin Davie gives
Sarah Brown a divine set of pipes, belying the severity of her
Salvation Army-ish uniform. And if anything, Ben Crawford’s voice
is too magnificent for the streetwise Sky. Davie and Crawford
blend uneasily on “I’ll Know,” then cohere smoothly in “I’ve
Never Been in Love.”

Steve Rosen’s Nathan
Detroit is a walking punch line in plaid. Megan Sikora is the total
package as Adelaide — a fizzy bombshell amalgam of Lucille Ball, Betty
Boop and the Judy Holliday of Born Yesterday. As the show’s silliest and
wisest character, she wins huge laughs and applause with her
squeals, growls and helium-inflated line deliveries.

Director Gordon Greenberg delivers the show as glitzy comic
entertainment. The set puts the entire height of the Starlight’s stage
ablaze in lights, and even minor ensemble roles are played with
arresting flair. Patti Colombo deserves mention for her
show-stopping choreography. The crapshooters
are spectacular in “Luck Be a Lady” (when Crawford really
comes into his own) and behind Rainey in Nicely’s mission testimony,
“Sit Down You’re Rocking the Boat.”

I think by now you know the score. You should go. If I were a salad,
I’d be splashing my dressing. Bet you eight to three you’ll have a
wonderful time. Especially if, like me, you’re one of those suckers who believes in
fly-by-night Broadway romance.