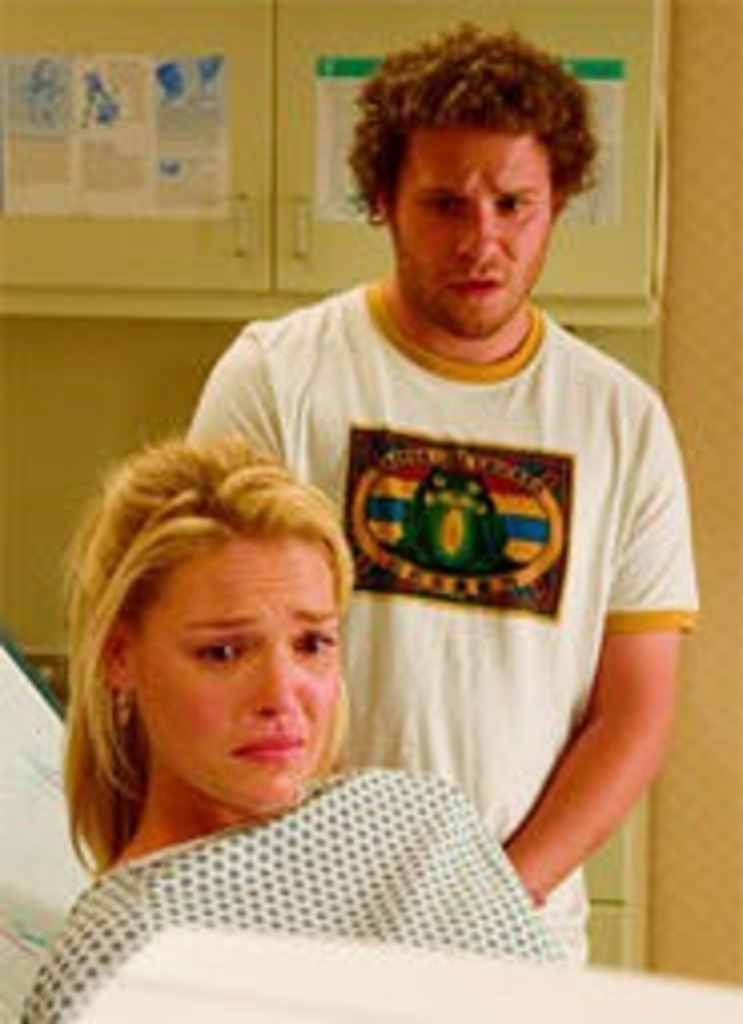 A few friends of mine who have adored Judd Apatow’s Knocked Up at early screenings have nonetheless voiced a similar complaint: There’s no way that pin-up-pretty Katherine Heigl would end up with soaked-in-bongwater Seth Rogen. But this is the geek’s fantasy, not the princess’s.

In Apatowland, the guy, no matter how frumpy or klutzy he is, always gets the girl. The writer-director has replaced George Lucas as the geek’s God of Thunder by promoting the nerdling, long confined to Bionic Woman-and-Wonder Woman girl-on-girl make-believe, to the bedroom, where he is ready to get … it … on. By which Apatow means, of course: He’s ready to grow up, accept the torturous responsibilities of adulthood, marry, raise loving children and maybe move out of the shithole he shares with four slack-ass roomies.

If you don’t buy Apatow’s premise that a woman celebrating her promotion to E! on-air correspondent would share her bed with a guy who dreams of operating a nude-celeb Web site, then wind up trying to get through a pregnancy with him, there’s always a gauzy Richard Curtis romance on cable. But if you’ve been paying attention to Rogen’s career, you know that he’s an engaging, warm leading man who deserves to get the girl.

Rogen plays a guy named Ben Stone, who’s been stoned most of his adult life — he’s living the dream, he tells his old man (Harold Ramis, genius casting). He lives with four pals, all Apatow veterans who reek of sweat and herb: Jay (Jay Baruchel), Jason (Jason Segel), Jonah (Jonah Hill) and Martin (Martin Starr). (The fact that the actors share their characters’ names suggests that they’re familiar with short-term memory loss.) Together, they dream of starting a site called Flesh of the Stars, devoted to detailing the precise moment when actors shed their clothes in movies.

Heigl, free from the gloomy climes of Grey’s Anatomy‘s Seattle Grace Hospital, is Alison Scott, who’s been promoted from E! segment producer to on-air talent. She lives with her sister and brother-in-law (Paul Rudd), proof that one can be successful and stunted. After her promotion, she goes to a club with her sister (Leslie Mann, the real-life Mrs. Apatow) and winds up in bed with Ben; in the morning, his flabby naked ass serves as a grim reminder of the previous night’s debauched misstep. Worse, he misunderstood her command to “Just do it, already!” the night before and ditched the condom with which he was fumbling; hence.

What happens, of course, is inevitable: A mistake turns into a pregnancy, which becomes an accidental relationship that turns into true love, then into heartbreak, then into happiness at last. That’s giving nothing away — for Apatow, it’s the journey — which lasts more than two hours but feels much shorter — in which the audience is meant to find delight and even a bit of melancholy. He wrings the biggest laughs from the smallest moments (a trip to the gynecologist, say, or the way Rudd ogles chairs in a Vegas hotel room) and finds absolute truths in fleeting and mundane occurrences.

Ultimately, what makes Knocked Up a terrific film — one of the year’s best, easily — is its relaxed, shaggy vibe. If it feels improvised in places, that’s because Apatow trusts his actors enough to let them make it up as they go, like the people they’re playing. It’s more than just a loose-limbed variation on About a Boy. It’s a sincere meditation on adulthood, accountability, fidelity and, yeah, getting high.