Is the Johnson County Election Office ready for the midterms? 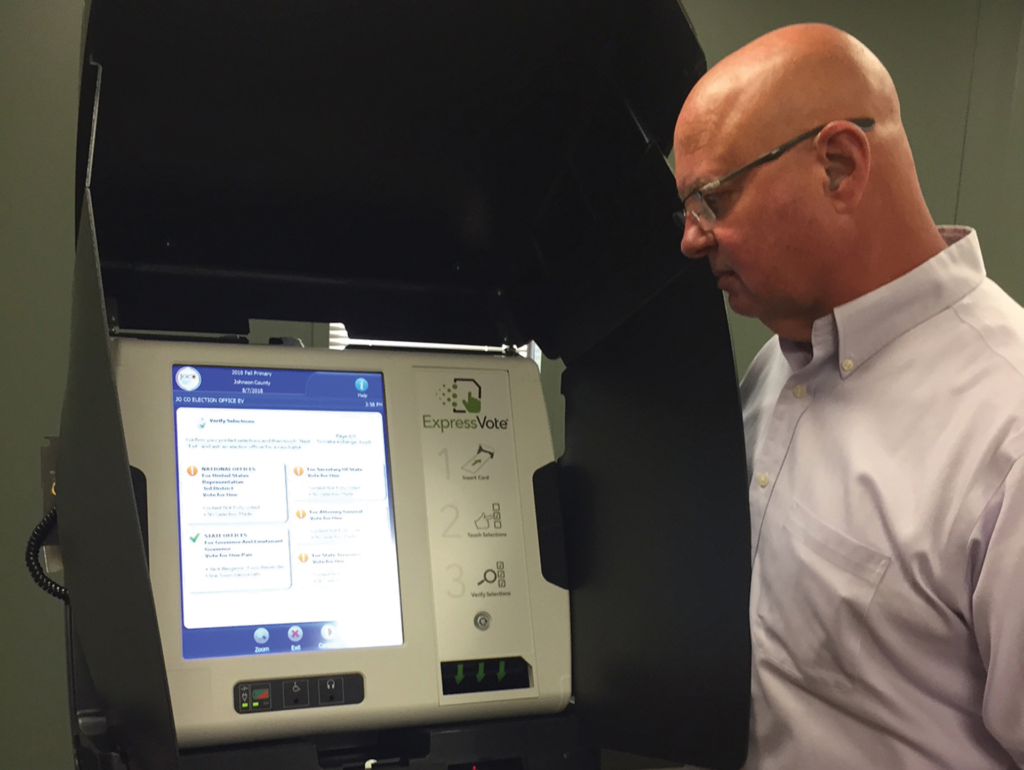 How bad was November 8, 2016, at the Johnson County Election Office?

Ronnie Metsker remembers it well. It was his first big election, less than a year after he became commissioner of the office. The choice between Donald Trump and Hillary Clinton had sparked a high number of absentee votes in Johnson County, the most populous county in the state. College students sent in ballots from across the country, excited to be a part of what they thought would be a historic day: the election of the first female president.

But the JOCO voting machines, made by a company called Election Systems & Software, were having a hard time keeping up with the influx of absentee ballots. They seemed to be on the precipice of a shutdown. When Metsker’s team began to upload the votes, they discovered they were missing about 2,100 ballots. For a sickening three hours, Metsker tried to make sense of it all, communicating with a baffled tech specialist at ES&S. The county didn’t get its final vote reported until 1:30 p.m. the following day. A debacle.

In mid-June, I drove out to the Johnson County Board of Elections to visit with Metsker at his office. In the back of the building, employees were testing 1,100 new voting machines the county has ordered, making sure they’re ready for the August 7 primary.

The stakes are high for 2018, and Metsker knows it.

There are more voters than ever in Johnson County, and more than 70 percent of those registered in the county voted in 2016. A similar turnout is expected in 2018. This fall, the county sits in a hotly contested Congressional district — a seat occupied by a very vulnerable Kevin Yoder. And those new voting machines? Johnson County is the first county in the nation to use them. They’re made by Election Systems & Software — the same vendor whose tech support failed the county so miserably in 2016.

“I certainly don’t claim to have the magic wand to tell you what’s going to happen,” Metsker says of the upcoming elections. “But I do know this: We’d better be ready.”

Voting machines in the United States are generally easy to hack. Hardware and software vulnerabilities are abundant, as is the existence of foreign-made parts. The Internet is rife with scary stories of security failure: old voting machines from Tennessee sold on eBay with voter information still inside, phishing scams, malware and scanning attempts against systems in Illinois and Arizona. Even the Election Assistance Commission — the body responsible for certifying voting equipment — was itself the subject of a hack. (One more to keep you up at night: it took less than two hours for computer hackers to break into U.S. voting machines at the 2017 DefCon computer security conference.)

What went wrong in Johnson County in 2016, according to Metsker, was hardly the stuff of spy novels. He believes the issues stemmed from, essentially, a failure to update software. Eight months after the election, while the election office was being remodeled, Metsker says an employee discovered an old ES&S memo from 2008. It stated that Windows was reducing storage space for its voter systems from four gigabytes to two, and that users of the systems should back up more often. The memo had apparently been misplaced, forgotten, or ignored. Two gigabytes would have been plenty for most ordinary elections, Metsker says. But not for one with the kind of turnout seen in 2016.

Johnson County election commissioners had actually been pushing for new voting machines since even before Metsker resigned his spot as chairman of the Johnson County GOP and took on the elections commission job in February 2016. His predecessor, Brian Newby, asked the county commission for new machines because the old system was nearing the end of its electronic life. (Newby went on to become director of the federal Election Assistance Commission.) There had also been public demands in the county for a paper trail — a way for voters to confirm that the machines they used accurately reported their vote.

In 2016, having allocated $13 million to replace the old inventory, Johnson County decided to join the three other most populated Kansas counties — Sedgwick, Wyandotte, and Shawnee — and shop for replacement voting machines together. Those three counties bought ES&S machinees — the kind that allow for the paper trail — and have used them for elections in 2016 and 2o17.

Metsker says he wasn’t crazy about the version the other counties purchased. The paper ballots had to be put through a separate scanner to be tabulated, and those machines were bulky and heavy and would take up too much of the election office’s limited storage space. They reminded him of Deffenbaugh dumpsters, he says. Election officials in other counties jokingly called them shredders.

“We didn’t have any space out here to have 200 Deffenbaugh containers,” Metsker told me. Eventually, ES&S offered Johnson County machines with a built-in tabulator, and Johnson County at last made the purchase.

Election commissioners in the other three counties say they’ve been happy with their version of the machinery so far, especially the paper trail. Even Beth Clarkson, the statistician who unsuccessfully sued Sedgwick County for an audit after she saw suspicious patterns in the 2014 vote totals, says the paper trail is an improvement (though she adds that the electronic poll pads that hold voter registrations need a closer look).

“They worked great for us,” says Bruce Newby (no relation to Brian), the election commissioner there. “They were very voter-friendly. I don’t know how on earth anyone would ever hack it.”

Metsker is confident the system they’ll have in place in Johnson County come August will be secure. The machines have no port to be connected to the Internet, he says, and even ES&S doesn’t have remote access for tech support. Moreover, the vote totals will come back to the election office on encrypted proprietary USBs. (As for the old machines, they’ll be bought back by ES&S, which will disassemble them, he says.)

He also notes that skeptical voters can ask to have their ballot read on a different machine to see if it matches. “You can ask machine number two, ‘Read my ballot and tell me what you see when you read these barcodes,’” Metsker says.

Also: the state is requiring an audit of a section of the vote. Though that statute is new and in need of clarification, it should reassure voters, Metsker says.

The county is nevertheless racing against the clock. It must train poll workers on a voting system that’s considerably different than the one used for the past 15 years. And having ordered the new machines in May, it only received them in mid-June. The aforementioned 1,100 ExpressVote Tabulators are half of the order — enough for the primary election, Metsker says — with the other half due in early September. A lot of variables in the air. A lot to do in a short amount of time.