Is midtown Kansas City ‘blighted’? Developers seeking tax breaks are trying to convince the city it is. 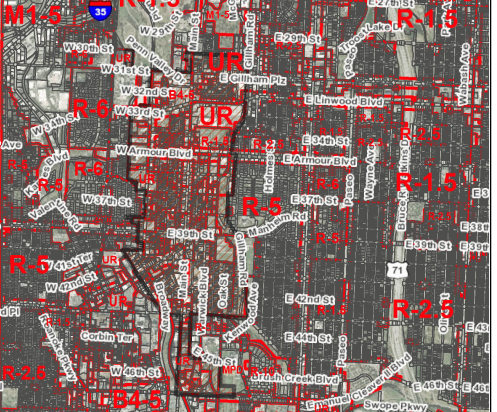 An ordinance being discussed in KCMO would declare the area on the map outlined by the black, bold line as blighted.

After 45 minutes of discussion over an ordinance that would approve a plan declaring the majority of Kansas City’s midtown area as blighted and in need of redevelopment last week, a city council committee decided to table the vote until at least Wednesday, December 18.

The Midtown Affordable Housing PIEA (Planned Industrial Expansion Authority) General Development Plan covers 469 acres of Kansas City, with borders located south of 30th Street and north of Emanuel Cleaver II Boulevard, west of Gillham Road and west of Pennsylvania Avenue. If approved, the ordinance would make future development projects within those boundaries eligible for up to 10 years of 100 percent tax abatement and 15 years at 50 percent abatement. That’s up to 10 years developers in the area could avoid paying property taxes altogether.

“Affordable housing in Kansas City is difficult to find,” Macoubrie told members of the Neighborhood Planning and Development Committee last Wednesday. “Collectively, we’re seeking solutions and it’s proving very difficult. The most serious and obvious barrier to affordable housing development is financial, because with affordable housing, rents are less, and when rents are reduced, projects produce less revenue.”

Under state law, blight is defined as any combination of factors that constitute an “economic or social liability, or a menace to public health, safety, morals or welfare in its present condition and use.” Jim Potter, a consultant for the economic development agency, listed vacant property in 14.2 percent of the planning area; illegally dumped trash and debris; century-old buildings; and an abundance of code violations and crime throughout the area as justification to label midtown as blighted.

The council members on the committee wanted more time to consider the ordinance because of several concerns. Among those were questions raised about how the plan would adhere to an ordinance passed in 2016 that capped abatements at 75 percent, what projects would come back to the council for approval, and how effective the plan would actually be at addressing the city’s affordable housing issues.

Macoubrie says the plan follows the Lucas ordinance, which includes exceptions for affordable housing projects that will allow up to 100 percent abatement under certain requirements.

Councilwoman Andrea Bough (6th District at-large) questioned how much say the council will have over tax cuts for individual projects that would qualify for abatements under the new plan.

“The concern I have is, if we’re making a housing policy on abatement, those [projects] are not going to come back to us,” Bough said, noting that while individual future projects will come back to the council for things like zoning and site approval, the council will not have a say financial incentive components.

Councilman Brandon Ellington (3rd District at-large) didn’t see any existing barriers to coax developers into the midtown area and questioned how the plan would best serve the city’s affordable housing needs, pointing out the area’s proximity to college campuses—UMKC, MCC, and KCAI—in the area. Ellington said using issues like crime and aging buildings was not being honest about the intent.

“It doesn’t look like you guys are trying to increase single-family or multi-family housing,” Ellington said. “It sounds like a crafty way of increasing student housing at the deficit of taxpayers.”

Macoubrie told Ellington that students had not been calculated into the plan, which he says was meant to target industry workers making $32,000 to $36,000 a year with units going for approximately $800/month. He also pointed out that economic development incentives cannot be used to build single-family housing, but can be used to create multi-family housing.

Councilman Dan Fowler (2nd District) pointed out that the mayor had created a list of priority projects for low-income housing in the city, none of which fall within the area of Macoubrie’s plan. He asked why the plan should be a priority if it’s not on the mayor’s priority list.

The committee was expected to vote on the proposal during Wednesday’s committee meeting, but pushed the vote back a second time to January 8. If the ordinance passes the committee, it will go before the full council for approval.

The Neighborhood Planning and Development Committee meeting is scheduled for 1:30 p.m. on Wednesday, January 8 on the 26th floor of KCMO’s City Hall (414 E 12th St).