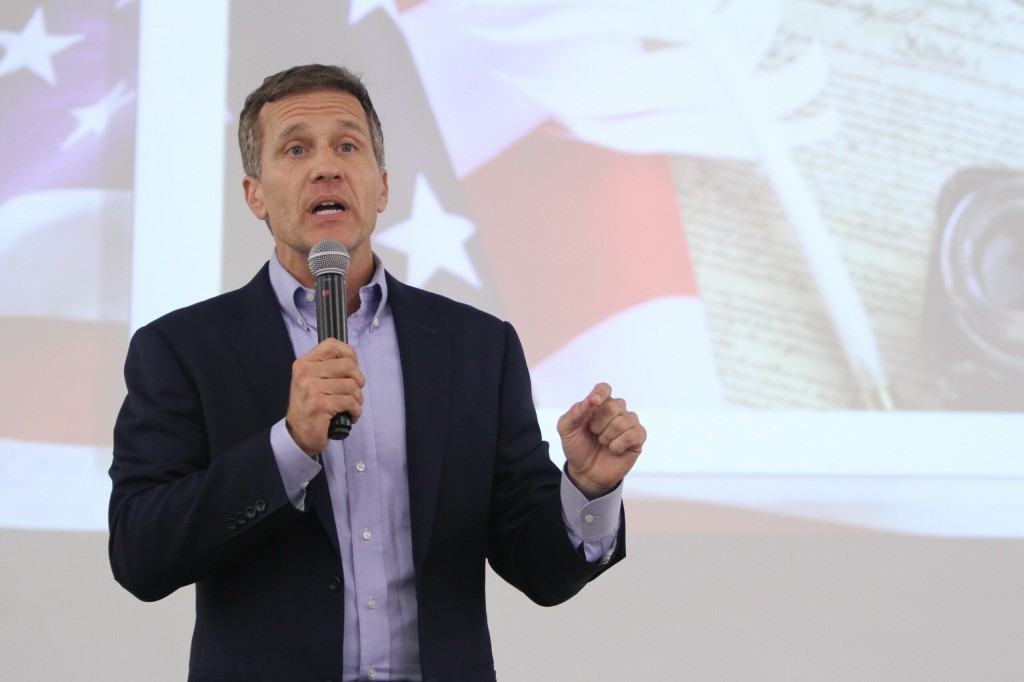 Missouri Republicans are pushing for changes in the state’s primary system to require a runoff election if no candidate garnered more than 50% of the vote.

And some think they know what inspired the change.

“We are changing the way we are doing elections in Missouri for one person,” said Senate Minority Leader John Rizzo, D-Independence.

“We all know who that one person is,” Rizzo added. “We are here late at night doing this bill because the majority party is scared to death that Eric Greitens is going to win a primary.”

Greitens was forced to resign as Missouri’s governor in 2018, facing almost certain impeachment under an avalanche of scandals and felony charges.

In March, he announced he was running for the seat of retiring Sen. Roy Blunt, setting off panic among many Republicans who worry he remains popular enough to win a crowded primary but could lose to Democrats in the general election.

Republicans on Thursday denied that Greitens was the motivation.

Among those who are not convinced is the disgraced former governor.

“Gov. Eric Greitens is dominating this race and everyone knows it,” Greitens’ campaign manager, Dylan Johnson, said in an email. “He’s going to win and there’s nothing that politicians in Jeff City can do to change that. This is just a sad, desperate attempt by the swampy establishment to try to subvert the democratic process. They will fail miserably.”

The runoff language was included in an election bill debated by the Missouri Senate Wednesday night into Thursday morning.

It would create a new primary election process for federal offices — U.S. Senate and Congress — as well as the six other statewide offices.

The primary would be moved from August to June. If no candidate garners 50% of the vote, a runoff would be held in August between the top two candidates.

“We thought it would be a good test phase,” Sen. Bill Eigel, R-Weldon Springs, said during Senate debate Wednesday night. “We put a sunset on there so the legislature can gauge how successful or unsuccessful it was.”

Senate Majority Leader Caleb Rowden, R-Columbia, said he supports the change because he thinks candidates should have the support of a majority of voters in order to be a party’s nominee.

Asked if Greitens was the motivation behind the bill, Rowden demurred.

Senate President Pro Tem David Schatz, who is considering a run for the U.S. Senate himself, said he also supports the change.

And, he said, his support for the idea has nothing to do with Greitens.

“There were statements made during debate that may have encouraged (Greitens) to believe he’s the motivation behind this,” Schatz, R-Sullivan, said. “But I’ve seen this occur on multiple occasions where candidates get elected without a majority of the votes. I don’t think it’s right.”

So far, Attorney General Eric Schmitt is the only major Republican candidate to join Greitens in the race to replace Blunt. But the entire GOP congressional delegation is actively considering jumping in.

With a field that crowded, a candidate could emerge victorious with far less than a majority of votes.

“There is a 25-30% group in this state who will vote for Eric Greitens no matter what. It’s shocking to me, but it’s the reality,” Rizzo said. “If you have three, four, five candidates in that race, that 30% becomes very important.”

The bill, which also includes language pertaining to judicial challenges to ballot measures, awaits a final vote in the Senate. If approved, the House could immediately send it to the governor or request a conference committee to work out differences with the Senate.

Greitens was accused of violent sexual misconduct during a 2015 affair, including allegations he led a woman down to his basement, taped her hands to pull-up rings, blindfolded her, spit water into her mouth, ripped open her shirt, pulled down her pants and took a photo without her consent.

He was accused of stealing a donor list from a veteran’s charity he founded in order to boost his political career—a felony charge that was dropped as part of a plea deal that stipulated prosecutors had “sufficient evidence” to bring his case to trial.

Lawmakers convened in special session in May 2018 to begin impeachment proceedings. He resigned in June 2018 as part of his plea deal.