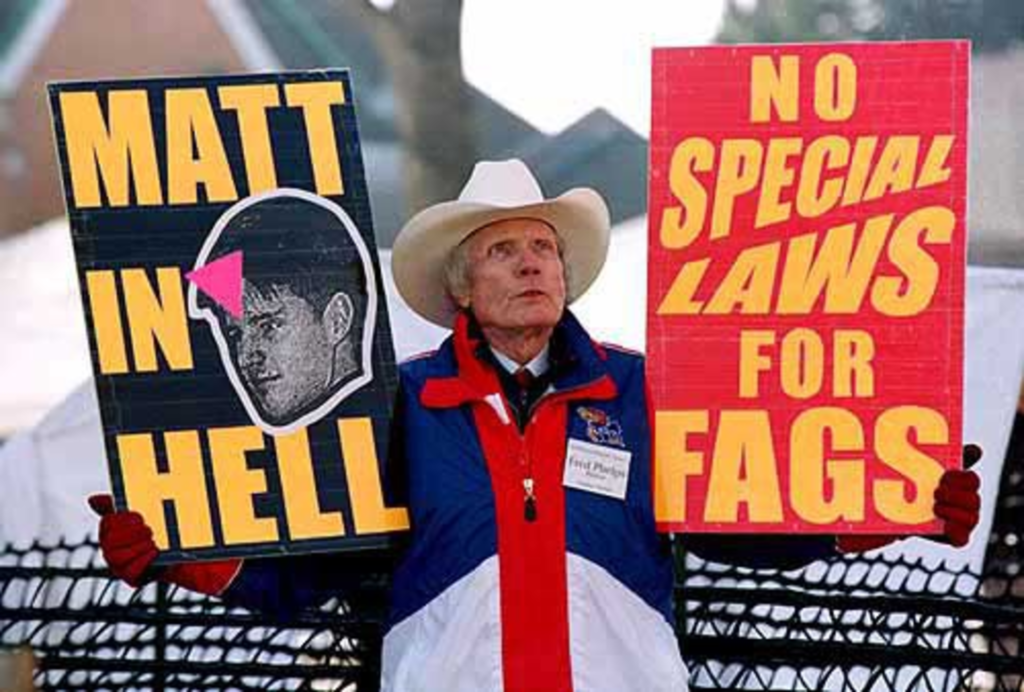 Fred Phelps is apparently on his deathbed. Equality Kansas, a LGBT organization whose members have been tormented by the Phelps-led Westboro Baptist Church for the last 20 years, is taking the high road.

“If the reports of Fred Phelps’ declining health are accurate, then his family and friends are certainly saying their good-byes and preparing to mourn his loss,” said Sandra Meade, chairwoman of Equality Kansas. “We ask that everyone understand the solemnity of the occasion, and honor the right of his family and friends to remember and mourn his loss in private without interruption or unseemly celebration.”

To outright celebrate Phelps’ imminent death does seem a bit vulgar. It would also give him more credit and attention than he deserves. But it’s worth noting that Fred Phelps is a world-class piece of shit, and the world will be better without him living in it.

But, still: the memories. Remember that time Phelps – who, rather remarkably, began his career as a civil-rights lawyer – was disbarred from practicing law in the state of Kansas, after making false statements in an affidavit? Or how, in the same trial, he called a court reporter a “slut” during a cross-examination? What a rascal!

Or how his own children say he is “addicted to hate” and that he mercilessly beat them with Mattock handles growing up?

Or how his bullshit church spent much of the last decade picketing military funerals and claiming that combat deaths were God’s vengeance on America for being a nation of sodomite hypocrites? Or when he organized a protest of the funerals for the victims of a bridge collapse in Minnesota? He could be a real knucklehead sometimes!

Whether Phelps believed his anti-everything, God-hates-fags rhetoric, or just suffered from a grotesque addiction to publicity, is ultimately irrelevant. He’s human garbage. Nobody will protest his funeral because there’s nothing objectionable about the death of a man who lived the way he did.