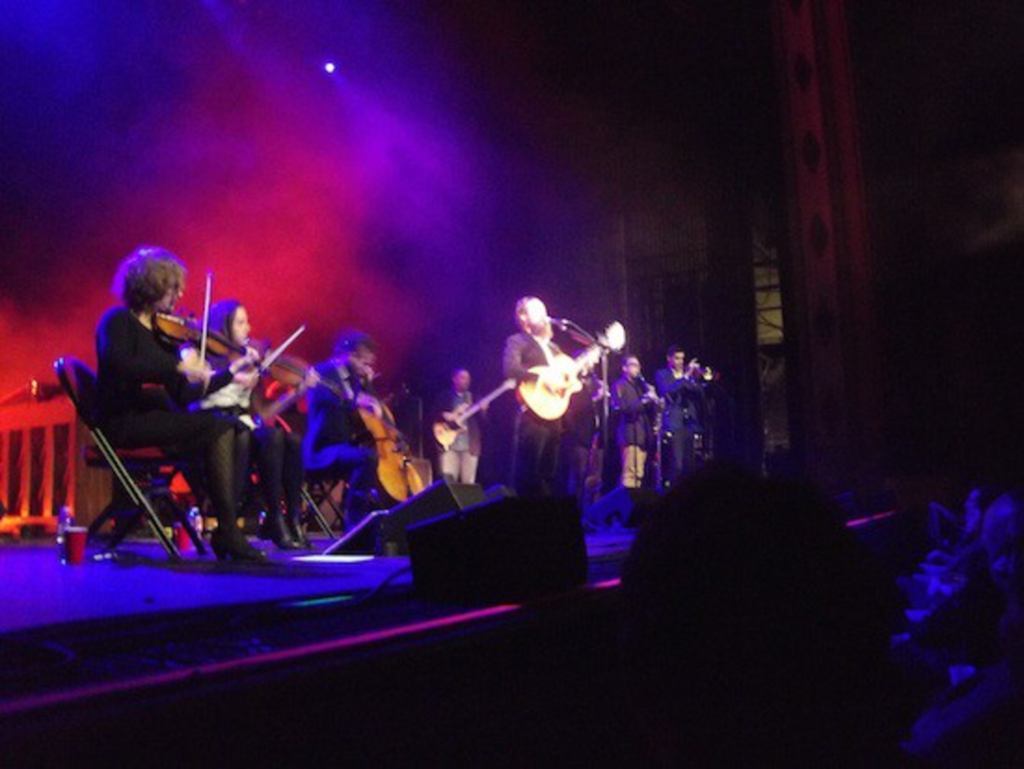 Iron & Wine is Samuel Beam, an indie folk-singer type who rose to success back in 2002 when indie folk-singer types were running rampant. The Iron & Wine that performed Saturday at the Midland was a 13-piece band. This orchestration was not utilized for broadening Beam’s range; rather, all members of the full band seemed to be playing at all times, creating a definite sound through which to experience Beam’s songwriting. At the same time, the band was sort of drowning him out.

I should come clean here: I am not the ultimate Iron & Wine fan. It’s not exactly my type of music, but hey, I’m open to new horizons, and a free show is a night of entertainment – one way or another.

Being given a free ticket to see Iron & Wine is something of a mixed bag. I’d liken it to inheriting an acre of land in a rural part of a neighboring state. You know you can’t move there – you would miss the bars, the culture and easy access, but nevertheless you want to see what you’ve got. With some reservations, I biked out to this metaphorical piece of land on Saturday night, expecting to feel the alienation of being the only guy in the place who didn’t actually like the band and had no one to commiserate with. What I saw there was what I had expected to see: Weeks of brush removal and filling Dumpsters, but through a curious lens. What can be done with this piece of land?

The mood at the Midland was particular to Iron & Wine’s particular fans. These are not the fresh recruits from Urban Outfitters, as I had assumed. The median age would probably have landed at 36, the standard attire a blazer. I overheard conversations pointing out how there were a lot of old people (such as themselves) there, a general distaste toward hipsters, and the difference between a good cabernet and a bad cabernet. I saw lots of couples, holding hands and gazing dreamily into each other’s eyes. This was a crowd of connoisseurs. Everyone knows the best product available, and for a romantic night out, Iron & Wine is that product.

The concert kicked off with an opening performance by singer-songwriter Jesca Hoop. A soloist with a guitar and a hell of a voice, Hoop did for the audience what Iron & Wine didn’t do for me an hour later: She haunted it. She made me doubt any musical ability I thought I had. She made me scribble pissy words down in my notes about her smug banter. She did this as a single person, making the school bus that was the extended Iron & Wine outfit seem like a very polished family band – for a family band, that is.

Still, I would feel like a dick if I said Iron & Wine’s set wasn’t what everybody wanted. Sam Beam defies criticism, and he made a point of it between songs. He jokingly let us know that he was paying attention to what we liked, and what we liked was the “old stuff” and the “weird stuff.” 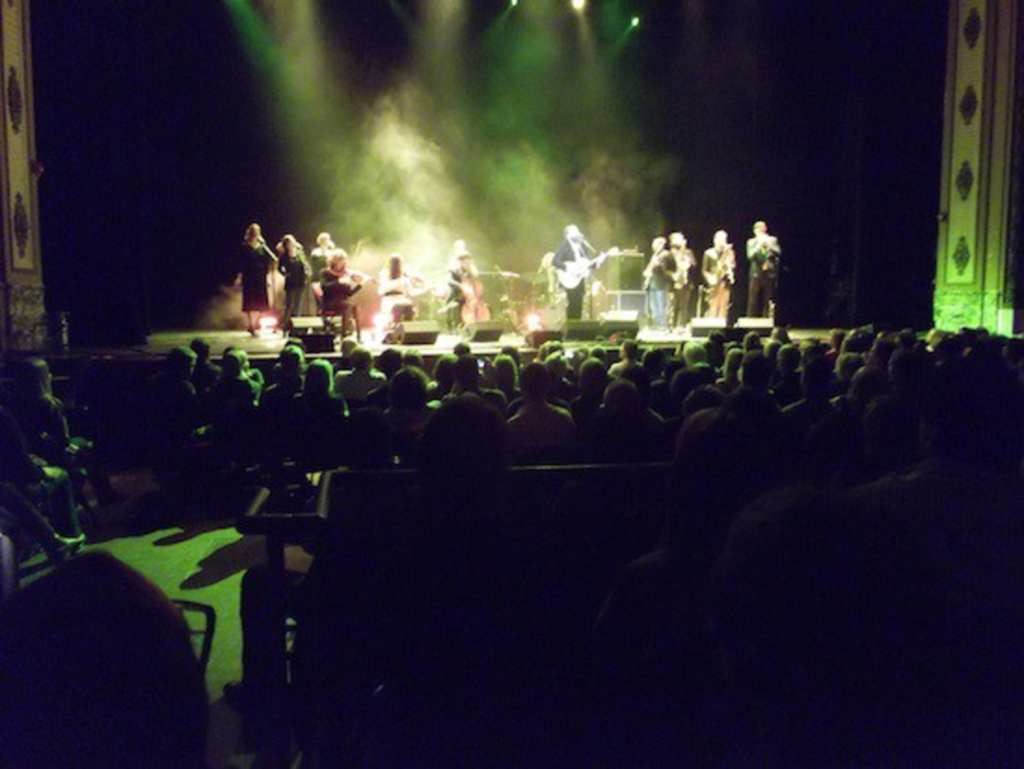 I didn’t hear any weird stuff, but to a fan of the Iron & Wine catalog, Beam’s trajectory is kind of weird. Beam seems like an artist with a vision. His backing band is not there to make him seem more legitimate but to make the music sound like what he wants it to sound like, which may just be the SNL house band. There were a lot of sax solos. A lot.

Beam messed with my perception of him a few times that night. At first I tried to think of him as a more adult contemporary Belle & Sebastian character, writing songs for office workers rather than teenagers. This seemed like a valid concept at first. In “the Desert Babbler,” he sang of warm kitchens and Christmas wine.

After a handful of songs, I gave that up and started comparing Beam with James Taylor, then maybe a more grown-up version of Dave Mathews. He possessed the swagger of a guy who used to hit on your girlfriend until he outgrew such things. This is a man who lives in Texas with his wife and five children, after all. Why should he try to be anything other than the successful family man he is?

I left the land-inheritance metaphor knowing that the land was beyond my ability to work, but with the feeling that I’d be thinking about it for a while after, and I’ve found that I’ve been doing just that. It takes a bit to re-create the SNL backing band after all, and it’s a weird choice that has alienated his fans on recent albums and earned him some shit reviews. At the same time, Beam is packing the Midland for his first Kansas City performance. A critic could say he’s watering down his material, but a keen eye may notice that he’s cutting himself off from the herd in doing so, honing his fanbase to be loyally his, and creating a bizarrely safe show where you are allowed to remain seated with your cabernet.

The Desert Babbler
Carousel
Tree by the River
Kingdom of Animals
Low Light Buddy of Mine
Passing Afternoon
Belated Promise Ring
Monkeys Uptown
Upward Over the Mountain
Resurrection Fern
Woman King
Sodom, South Georgia
Such Great Heights
Caught in the Briars
Sundown (Back in the Briars)
Jezebel
Grace for Saints and Ramblers
Lean into the Light
Singers and the Endless Song
Innocent Bones
Flightless Bird, American Mouth
Your Fake Name Is Good Enough for Me
–
Naked as we Came