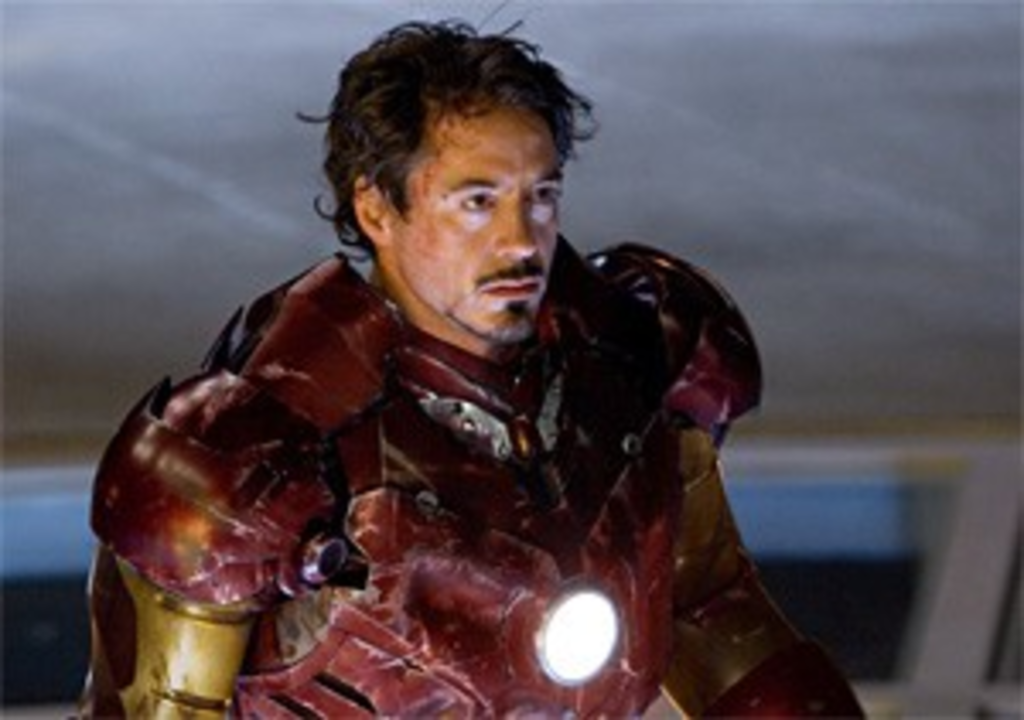 Chalk it up to personal preference, but I’ve always been fonder of comic-book heroes who emerge by intent rather than by happenstance. I mean the ones whose transformation from average Joe into masked crusader is an act of will instead of the unintended result of a genetic mutation, a spider bite, or a meteor ride to earth from the outer reaches of the galaxy; the ones who, underneath the metallic breastplates and layers of spandex, remain ordinary bone and sinew.

Tony Stark, the unlikely hero of the Iron Man comics co-created by Stan Lee, Larry Lieber, Don Heck and Jack Kirby, is one such creation. A boy-genius inventor and heir to a weapons-manufacturing empire, Stark initially conceives of his crime-fighting alter-ego in an act of self-preservation, donning a makeshift suit of rocket-powered armor in order to escape from the bad guys who have abducted him during a Stark Industries field test. Nothing if not a product of his foreign-policy moment, Stark first appeared in the March 1963 issue of Marvel’s Tales of Suspense, just in time to fight the encroaching Red menace in Southeast Asia. In the 2008 film version of Iron Man, directed by Jon Favreau, Stark finds himself at odds with Afghan insurgents called the Ten Rings, who, in a wonderful Taliban-era irony, come armed with a black-market supply of Stark’s own war machines.

Whereas Lee and his collaborators based Stark in part on Howard Hughes, this 21st-century version, embodied here by Robert Downey Jr., is more like a defense-industry Mark Cuban or Richard Branson — a coiffed and tanned, media-savvy technocrat whose too-cool-for-the-planet attitude says that as long as the market is up and we’re kicking Charlie’s (or Hadji’s) ass, it doesn’t much matter how we’re doing it. But Stark soon gets his comeuppance in a desert-chic cave. When Ten Rings demands a custom-built smart bomb from Stark’s newly deployed “Freedom Line,” he realizes that maybe WMDs aren’t so great after all. Not that Stark’s subsequent decision to dismantle the most profitable arm of the family business goes over very well with his board of directors or his longtime business partner, Obadiah Stane (Jeff Bridges).

Though he remains best known for writing and co-starring in 1996’s hipster totem Swingers, Favreau honed his directing chops with a couple of richly imaginative, resolutely lo-fi kids movies, Elf and Zathura. If the larger-scale, bigger-budget Iron Man never quite ascends to those heights of tinsel-and-string splendiferousness, it maintains Favreau’s fondness for the handmade over the prefab. It’s an exemplary comic-book fantasia.

When Stark returns to his sprawling Malibu mansion and laboratory — a sort of sun-and-surf Batcave — to perfect the prototype of his scrap-metal Iron Man exoskeleton, Favreau gives the sequence the slapstick ping of early Blake Edwards or Frank Tashlin. And Downey is — as he is in most of the film — a marvel to watch here, his body a shimmying human Jell-O mold as he tries to get the hang of his newly jet-propelled hands and feet. His face a kaleidoscope of exhilaration and terror, he’s like a kid without training wheels for the first time.

The movie — and I mean this as the highest possible compliment to Favreau and the four credited screenwriters (who include the Children of Men team of Mark Fergus and Hawk Ostby) — uses the better part of an hour to really get going. Rather than cutting directly to the chase, it takes its time to involve us in the characters, who are relatively three-dimensional and are played by the kind of actors who know how to make a lot out of not very much. As Stark’s dutiful, waiting-to-be-unbuttoned Girl Friday, Pepper Potts, Gwyneth Paltrow is particularly appealing, and the ever-reliable Bridges manages to invest a glimmer of conflicted humanity in a role that all but comes with “Villain” stamped on its forehead.

Just about a year ago at this time, another summer tent-pole that climaxed with giant robots body-slamming each other on the streets of Los Angeles was making its way into cine­mas, undeterred by critical disdain. The movie was called Transformers — perhaps you’ve heard of it. Iron Man, too, is something that people will see regardless of the reviews, but here is the point: Whereas Michael Bay has mastered a kind of sensory-assaulting pop art, Favreau is a born storyteller who engages the audience’s imagination rather than crushing it in a tsunami of digital noise. He gives us giant robots we can actually care about, as opposed to those we can scarcely tell apart. And that, I would propose, is the difference between making images and making movies.