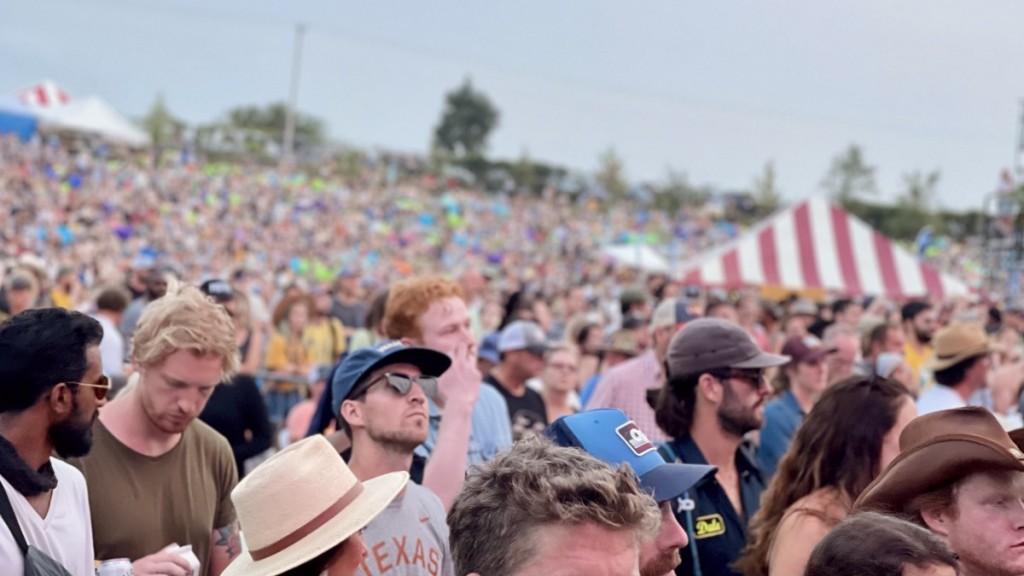 Views from Hinterland on Sunday August 8 2021. // Photo by Emily Standlee

Turns out there’s more to be seen and heard near Des Moines than just corn and cattle—though both are Midwest staples. Cows will be your friend if you’re nice to them. But that’s not the point.

The point is that the folks at Hinterland were gracious enough to toss me and two friends tickets to the three-day music festival in Saint Charles, IA last weekend.

Though we’d have liked to camp—or glamp, the air-conditioned option—our schedules only allowed for one, blissful day of attendance. We lucked out because I was most excited for the Sunday lineup.

That said, camping did seem like the way to go. There was a shower trailer. I, too, dream of owning a truck so I can perch a rooftop tent on it, as someone had done with their Mercedes G Wagon. Hinterland campers are nothing if not industrious.

As we followed the string of attendees—some in hiking sandals, some in cowboy boots—something that sounded a lot like outlaw country rolled across Iowa. Orville Peck’s unmistakable baritone was leading us home. 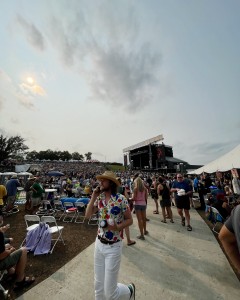 Peck was on stage as we walked in. // Photo by Emily Standlee

Putting Peck’s music in a box is difficult. I’d call it goth-country with a rambling, saloon flair. At one point he looked out on the crowd and said the next song was about a drag queen: “Queen of the Rodeo,” from his 2019 album Pony.

Peck is ahead of everyone when it comes to fashion. His signature silhouette includes a mask with eyeholes and dramatic fringe that falls past the chin. Back in June, he released a cover of Lady Gaga’s queer anthem “Born This Way.” We were lucky enough to see him perform it live.

No need to buy that tent, actually—Orville Peck brought all the camp necessary.

Between sets, we got drinks with drink tokens, available at the top of the hill near the ticket stand. Next year I’ll skip a step and bring cash for the bar.

Also worth mentioning: Hydration. Hinterland allows empty water bottles into the fest and had sustainably packed water for sale and a free water station on the grounds. Unfortunately, the water was on the other side of the grounds from us. Fortunately, we hacked the water issue by asking the bartenders for cups of ice, which they provided with haste and care. The festival staff was noticeably delightful, across the board. 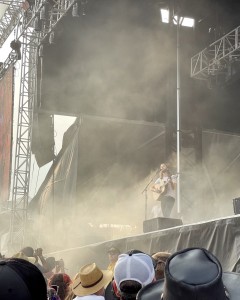 Next up was Los Angeles band Mt. Joy, who have made their way into countless playlists of mine over the last year. My friends had broken down empty White Claw boxes to lay out near the bar tent in VIP, but I wanted to get closer for “I’m Your Wreck” from the band’s 2018 self-titled album.

Mt. Joy’s mix of folk and blues breaks your heart in the best way. Anyone who loves to harmonize or goes crazy for lush harmony should give “Younger Days” a listen. From the pocket to the right of the stage, I could tell the band loved that they got to be back out on tour.

I like when bands do snippets of other songs or throw in the right medley of covers in the middle of their set. Mt. Joy sang a little of the existential Flaming Lips classic “Do You Realize?” which seemed like a good representation of the times at hand.

I returned to the box blanket and my friends. Speaking of the Flaming Lips, someone had found a bubble wand.

I can’t lie—I’m still unable to say the next band’s name, but I was most excited to hear their music live. I just didn’t know how it would translate. But it certainly did. 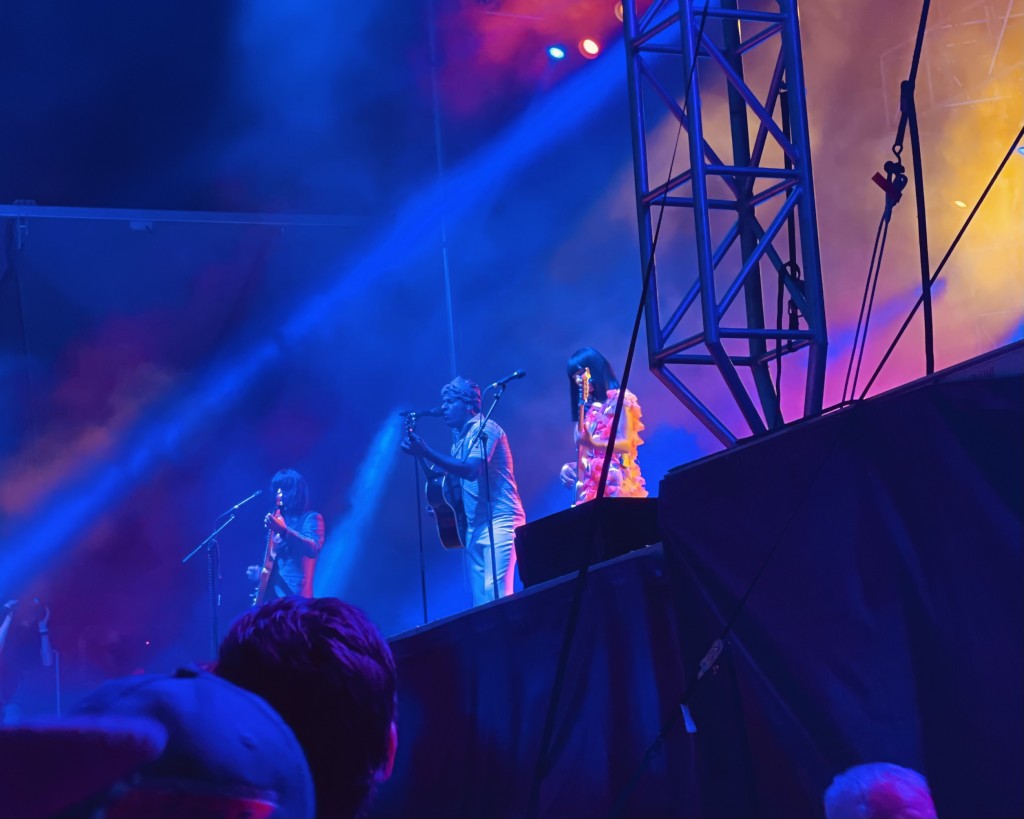 Khruangbin, Houston’s bass-heavy psychedelic funk trio, was a sight to see as the sun set over Hinterland. From album art and merch to live, on-stage visuals, the Khruangbin experience is necessary for anyone who’s especially visually stimulated. Plus Laura Lee’s bass lines get trapped in your body.

As does Mark Speer’s meandering guitar playing. He does that thing where the guitar sounds like a voice, I don’t think it’s easy to pull off. Drummer DJ Johnson served beats that previously had me getting down while I cleaned my apartment (you know, the whole shelter in place thing), but on Sunday I actually got down. My spine almost couldn’t handle the funk.

Some of my favorites included the addictive “Time (You and I)” and “So We Won’t Forget,” both from the 2020 album Mordechai.

What’s more, Khruangbin got Leon Bridges himself onstage. Together, they did “Texas Sun,” which is a feel-good banger all on its own. One of my friends told me she was satisfied with the length of time bands spent playing. Sets began and ended without any funny business, which kept things moving at a steady pace.

That same friend was most excited to see Bridges, who closed out the show. Does this man need any introduction? He hit us with the dance moves as soon as he got to Iowa. He was the epitome of smooth.

Bridges was born in Atlanta, but moved to New Orleans and then Fort Worth, and I think the energy of all three cities spills out of him when he sings.

The song that introduced his music to me was “River,” which should go on the official list of perfect songs. It is flawless in terms of melody and lyrical delivery—a true rise and fall of glittering emotion. Some of the best performers are storytellers, and Bridges tells a story through his voice, carefully orchestrated movements, clothes, and the way he shares the spotlight with his band and backup singers.

I’m not being dramatic when I say seeing him live felt like a blessing from the universe. 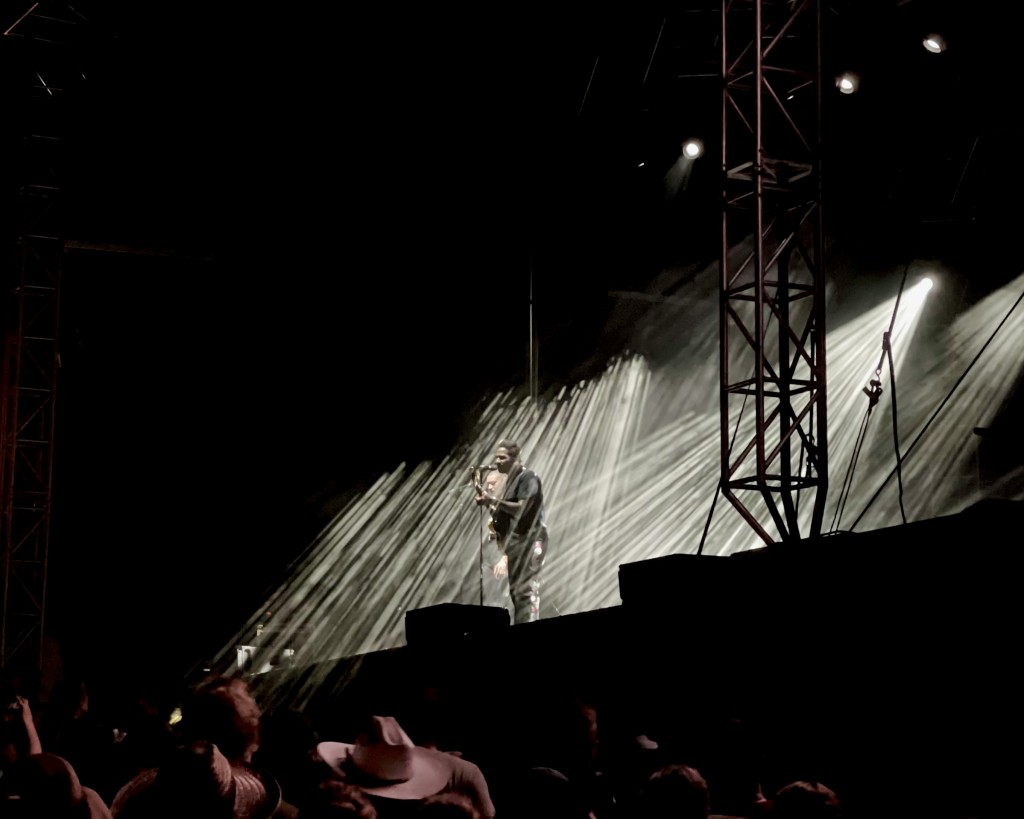 If you love live music and haven’t been to Iowa for even a day, you should consider pulling off I-35 and setting up shop at Hinterland next year. I’m already looking at pop-up campers.