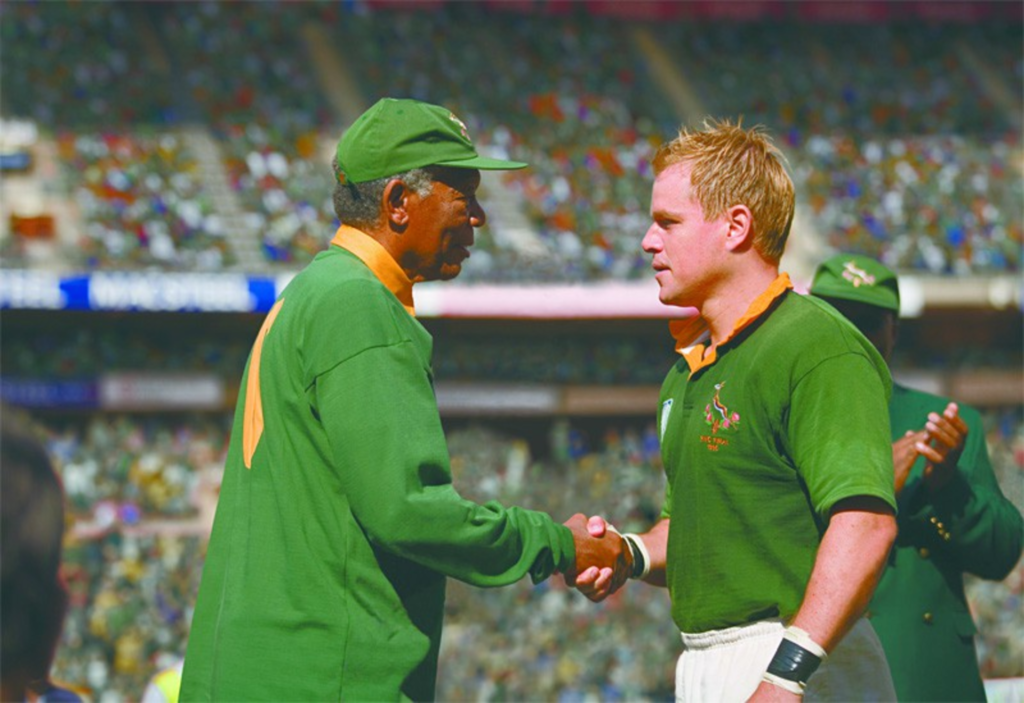 Aside from Morgan Freeman, who makes a fabulous Nelson Mandela, there’s this to savor about Invictus, a rosy tale of racial reconciliation neatly wrapped in a triumphalist sports movie: The film is free of Obama parallels. We also could use a happy global moment, and Eastwood picks one out of the otherwise rocky history of South Africa, when the country’s first post-apartheid president stepped out of the jail where he had languished for 27 years and firmly set aside revenge politics in favor of national unity.

More than most, Mandela understood the cohesive power of the symbol — in this case, the bright-green uniform of the South African rugby team, the Springboks, which echoed the flag beloved by whites and hated by blacks under apartheid. Adapted by South African writer Anthony Peckham from a book by former London Independent journalist John Carlin, Invictus tells the story of how Mandela, with help from the Springboks’ team captain, Francois Pienaar (Matt Damon), turned a World Cup rugby match into a moment of rainbow solidarity.

Like every Eastwood production, Invictus is stately, handsomely mounted, attentive to detail and relentlessly conventional. As a portrait of a hero, the movie effortlessly brings a lump to the throat. (Freeman gives a subtly crafted performance that blends Mandela’s physical frailty with his easy charm and cerebral wit.) As history, it is selective to the point of distortion. It’s true that you can’t shoehorn a nation’s history into a single movie, but Peckham’s dialogue, stuffed with strenuously underlined exposition, blazes a fast trail from mutual suspicion to interracial love and understanding.

The powerful dislike between Mandela’s black bodyguards and white bodyguards melts into reverence for their leader and joint cheerleading for the team. Within minutes of their enforced arrival in the shantytowns, the Springboks (including Eastwood’s cute son, Scott, who gets plenty of money shots) are happily hoisting adoring black boys onto their shoulders. The maid of Pienaar’s parents gets tickets to the cup final, where she and the mistress sit side-by-side, rib-poking with every home-team score.

Never mind that many white supremacists fled abroad to seethe in safety over the end of white privilege. Never mind that the African National Congress, the very movement that had worked for years to free Mandela and bring down apartheid, is confined here to a lone reductive scene that dismisses a complex resistance group as a group of thuggish ideologues. And Winnie Mandela is kicked out of the movie altogether, save for a couple of cheap gibes at her betrayal of her long-suffering husband. She and the extremist wing of the ANC have a right to a more nuanced exposure in Invictus, if only to acknowledge the unpalatable truth that apartheid manufactured more monsters than it did dignified heroes with forgiveness in their hearts.

Mandela is a great man, but that’s no excuse to position him in a great-man theory of history. Invictus becomes what almost every Eastwood movie becomes: an inquiry into masculinity shaped in the director’s own image, with the answers already supplied.

Eastwood can’t play his own wounded hero this time, but his perennial ideal is all here in Mandela the courtly gentleman, Mandela the elderly yet still-potent flirt, Mandela the dry wit and, above all, Mandela the rugged individualist. Mandela befriended his prison guards and refused to make enemies of South African whites, including his former tormentors. Yet South Africa today is a muddle of hope and despair.

How Invictus will play in the North American multiplex (foreign sport + foreign country = not promising) is a lot less interesting than its reception in Johannesburg and in the townships, where conditions remain abysmal and communities are decimated by a long-untended AIDS epidemic. Today’s South Africa has been many decades in the making, and it is the product not of one good man but of movements full of courageous men and women who almost certainly rose to power before they were ready. But where’s the glamour in that?