Investigating the secret world of an enigmatic record label 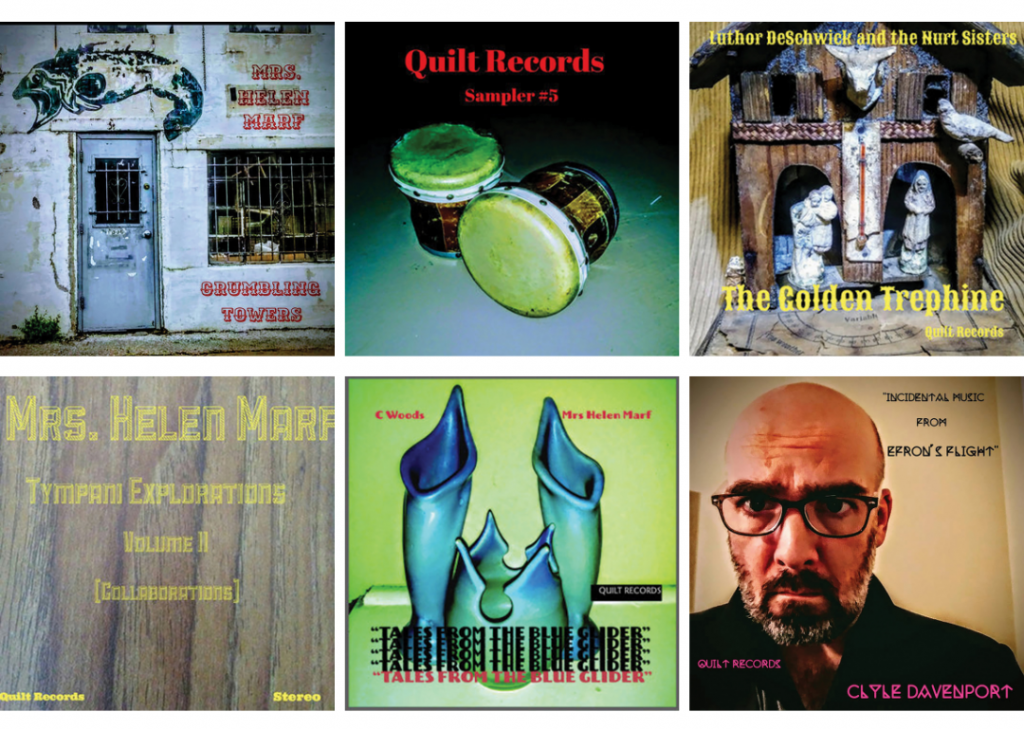 From the ‘50s through the ‘70s, some of America’s “budget” record labels gained notoriety for seemingly random output. They released what they could afford to release and, as such, created a connective thread between musicians and styles that otherwise could not be more disparate.

Few encompassed this scattershot set of sounds quite like Quilt Records.

A scan through their catalog is to see the tympanist stylings of Mrs. Helen Marf; the “spirited, lazy blues walks” of Jumbo Puny O’Dainty; Clyle Davenport’s incidental music from cult British television series Efron’s Flight; and the surf-rock of Sparta, Minnesota’s The Dumpster Lads. A random smattering of acts, still somehow cut from the same cloth.

It’s a fascinating legacy. Even the most encyclopedic music historian would probably be stumped when it comes to Quilt’s three decades of releases.

All of the music from Quilt’s diverse portfolio of artists is the product of a single Kansas City musician: Jason Beers. Those familiar with Beers’ musical output under his own name—as part of The Brannock Device, Dead Voices, and Wild Chipmunk & the Cuddly Poos—won’t be surprised. 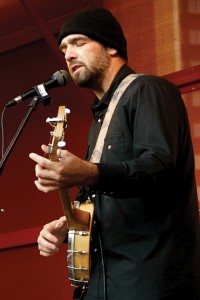 Beers is exactly the musician you’d expect to develop his own fictional musical universe in which to play God.

It all began with the July 2010 release of A Small Collection of Gargantuan Hits By the Many Pseudonyms of Jumbo Puny O’Dainty.

Dropped on Beers’ Bandcamp page, it purports to be a compilation of songs recorded by the man born Melvin O’Dainty in Wooly Bully, Nebraska “from 1952 until his death in 1959 due to complications from wounds received during a gig at McGonigle’s Happy Times Pub.”

How did one eccentric release spawn an entire alternate multi-era musical roster?

“It started out as a goofy pun for the Big Tiny Little albums–the guy from Lawrence Welk,” explains Beers. “There are other albums that he did under different pseudonyms. I always thought that was kind of hilarious. One night I wrote out all these different things: ‘big and tiny,’ ‘big tiny little,’ and combined them all.”

Beers’ initial thought was that this would be a hilarious album, mostly for himself. The names of the various labels within the Jumbo Puny O’Dainty liner notes, such as Valvotrix, Happy Tunes, and Mighty Mite, were the inspiration for Quilt’s eventual cadre of artists—with Quilt Records being the label for which O’Dainty recorded the song “All Broke Down” in 1952.

“The fun was coming up with these weird record label names,” Beers says, acknowledging that they’re not too outrageous to be believable for the era. So why not keep trying to branch off from the initial Jumbo Puny O’Dainty stuff? 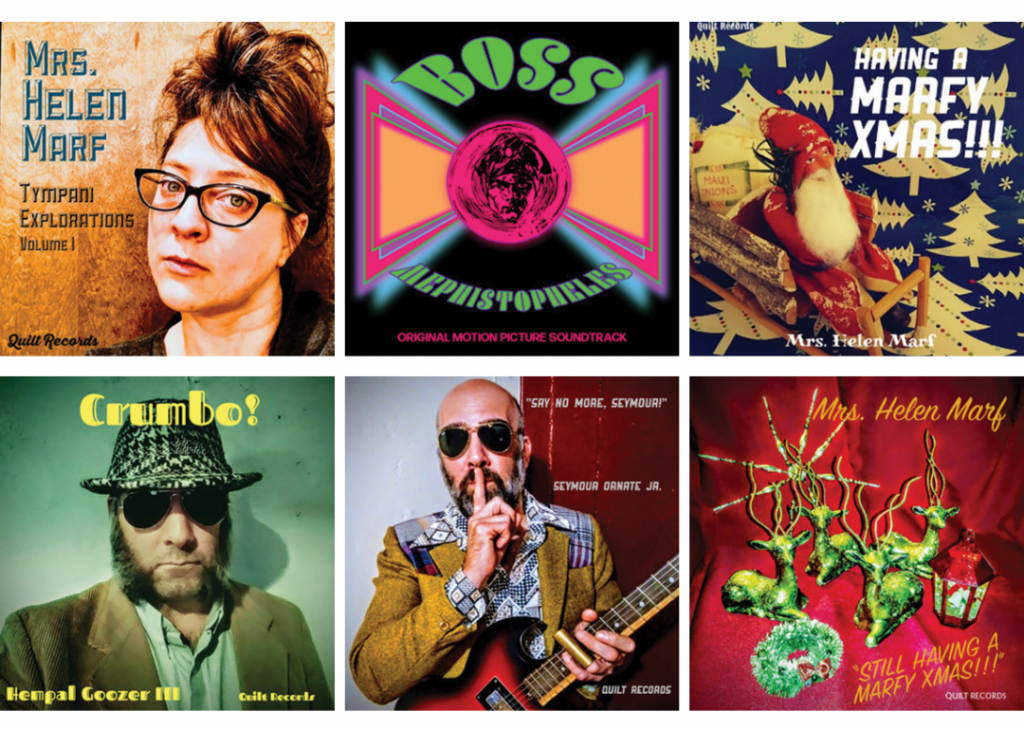 It sounds as though it came straight from some low-level trickster demon, with the mission to blow minds and confound listeners.

Diving the bargain bins at any Goodwill will uncover two distinct genres of “forgotten” music from a time period. You’ve got the gigging musicians who thought they were going to make it big, but flopped.

Then you’ve got The Others. It’s a universe of outsider art made by people who just had an unceasing impulse to get an idea out of their head and onto wax for others to hear.

Folks that would go make 45s just to share what they thought about the death of JFK Jr. or a mine disaster. The stories of how these songs come to exist at all are often just as fascinating—or more engaging—than the tunes themselves.

“That’s the thing I liked about all those old budget records from the ‘50s and ‘60s,” says Beers. “It seems like anything goes. There’s a timpani record, or something that’s just bongos and flute and guitar. Sure! That was the thing. I played it out in the whole Quilt Records scenario. Why not have a bassoon dentist player’s vanity album? It just kept going on.”

In addition to his Quilt Records output, Beers records albums under his own name. But on his Bandcamp page, his entire “personal” and pseudonymous discography exists side by side. As the musician puts it, disorientation is central to his sense of fun. 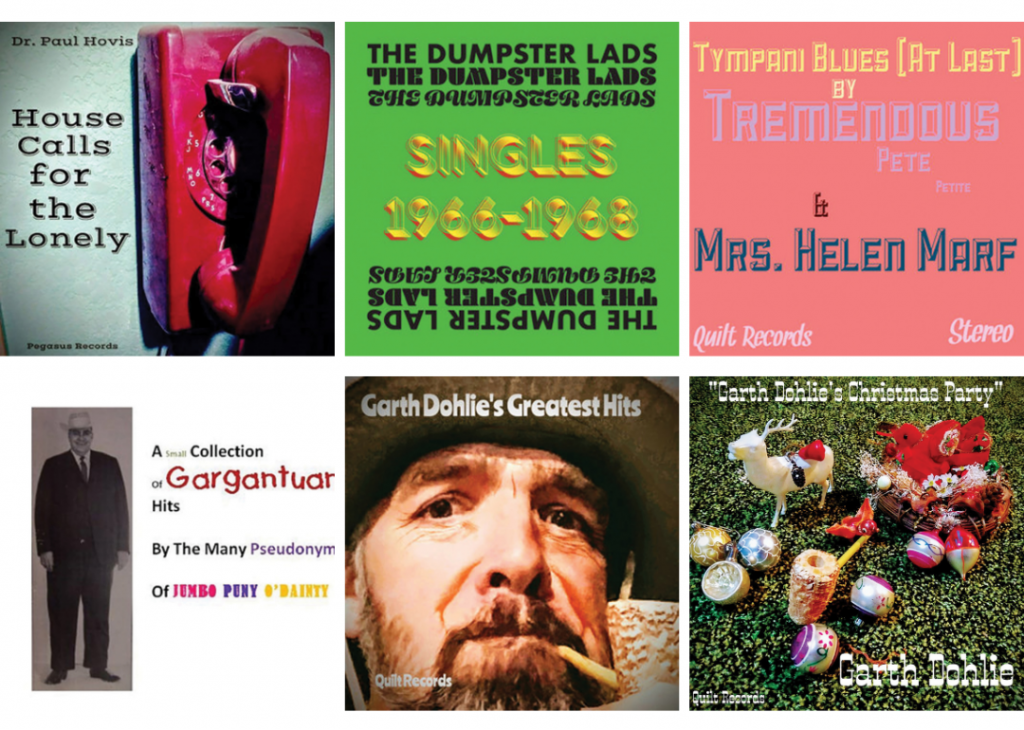 “I like that people get confused, ‘cause I think it keeps them on their toes,” Beers says with a laugh. “If they’re just skimming through and it’s like, ‘Oh, here’s the banjo album,’ and then it’s like, ‘Holy shit! Here’s scary theatrical pipe organ music.’ I like it all, so it makes sense to me.”

Providing guidance for those coming to the world of Quilt Records for the first time, Beers’ liner notes for each release allow him to go further into the lore of his universe.

“I’ve tried to create these characters with a singular vision,” Beers says of his creations like Marf, O’Dainty, and “farmer, lover of nature, and patriot” Garth Dohlie.

While story often comes before music for Beers, Quilt’s most prolific musician, Helen Marf, has a different process. The creator simply wanted to hear weird timpani music. That was it, until the tracks inspired their own whole series of backstories.

“Ater two or three songs—or even maybe the first one—it’s like, ‘Why am I even doing this?’ I gotta figure out the ‘why.’ Why would this be? Why would this music exist?”

“Why would this music exist?” serves as a story prompt and inciting incident for everything that Beers tackles. These lives, born of a blend of influences ranging from MAD Magazine to apocryphal tales of real musicians, become a deft experiment in world-building. 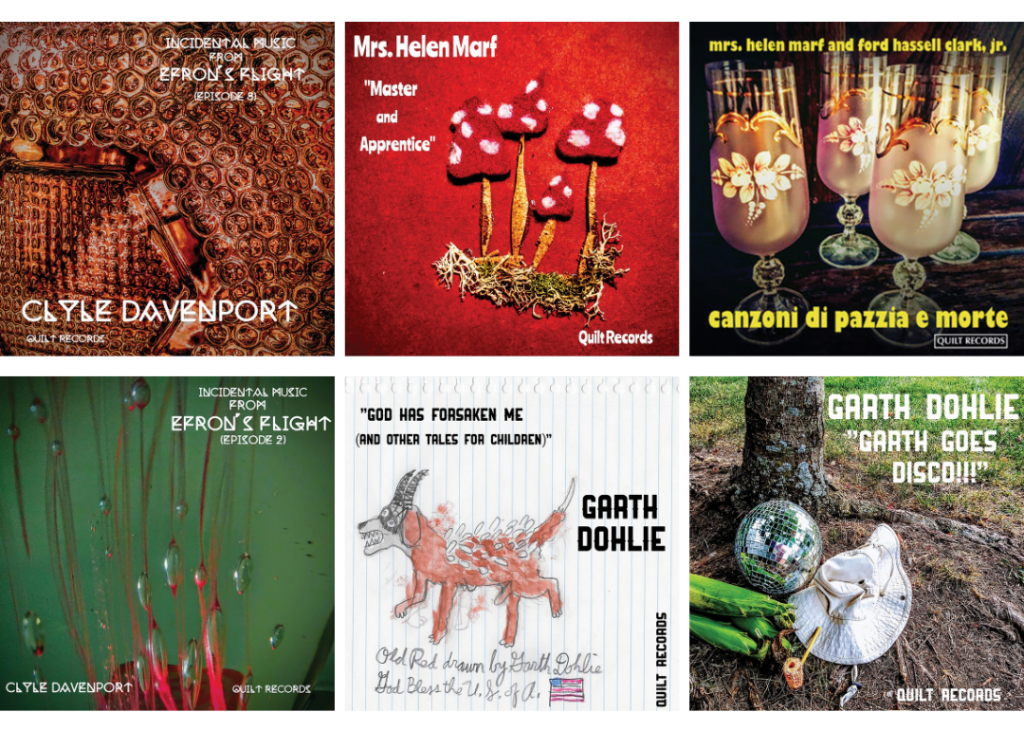 “Going through old records, you see these old things from motels: autographed pictures of lounge acts and stuff,” Beers says. “I always wondered what the backstory is like. These are the people you don’t hear about. They’re not forgotten, but they’re essentially in the rubbish bin of thrift stores, if they exist at all, not remembered by anyone other than their immediate family. They had their weird, skewered shot at fame.”

“When you drive through these places such as Sikeston, Missouri enough, you’ll be sitting in a cafe, eating lunch, and as you look out the window, and begin wondering, “What happened here? What was going on at this place?”

“There’s always a fascinating story,” Beers says. “If you look through Wikipedia, there’s always something that surprises. There’s always one person where you’re just like, ‘I have never heard of them, but evidently they are very important to this town.’”

There is something glorious about dedicating your life’s work to exist in, not just the thrift bin of history, but the thrift bin of an imaginary world. And Quilt Records, an amalgamation of sincere approaches to long-lost musical frameworks, rises to a level more memorable than mere pastiche.

For future listeners that don’t know the full context of what they’ve stumbled upon, the world of Quilt Records might appear to be less homage, less parody, and more… real.

We envy anyone who might occupy a reality where it seems plausible that—somewhere out there—Helen Marf is still delighted by hammering away on her timpani.