Inside a West Plaza bungalow, Open House is carving out a new, subversive space for art and community-building 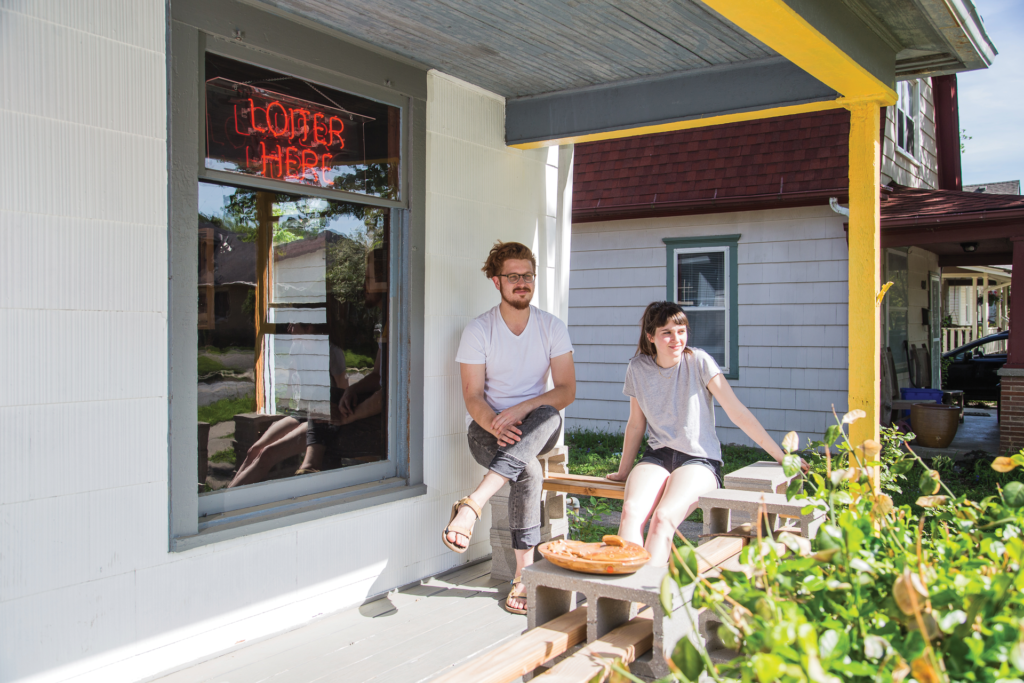 Can Kansas City continue to be a place where young artists live cheaply, have room (and time) to experiment, even own a space?

The correlations between art and real estate have become more intertwined here in recent years, and it’s mostly not good news. As the Crossroads grows and becomes less habitable for artists and galleries that aren’t profit-driven, experimental and avant-garde art becomes more difficult to find, replaced in favor of goods that sell. Plenty of established, for-profit galleries are making ends meet and providing some measure of career sustainability for local artists. But is it possible for the next wave of young curators to build a new crop of galleries before Kansas City becomes prohibitively expensive? Is the price of being a “rising art city” to sacrifice the spirit of creation that got us here?

Olivia Clanton and Brandon Forrest Frederick (pictured) are attempting to answer those questions — or, at least, explore them a bit — with a new gallery called Open House. For a while now, the two Kansas City Art Institute graduates (she’s 23, he’s 29) have been living together on the West Plaza and working freelance and service-industry jobs to keep their respective artistic endeavors afloat. Next door, at 4419 State Line Road, was a vacant, dilapidated home, in no shape to rent. But they saw potential. Eventually, they made a proposal to the house’s owner: Let us turn the house into a gallery before you start fixing it up. He agreed, Clanton and Frederick got to work, and now we have Open House.

From the sidewalk, the gallery looks like several houses on the block. Up close, you discover that the real-estate sign and informational tube on the lawn — a common sight in the area these days — are fakes. Inside Open House, the work is hung directly on studs, and the temperature inside is roughly what it is outside. Not much about the place resembles the typical white cube.

Consistent with that tone, the shows lined up at Open House, including Paul Shortt’s “How to Loiter,” (on display in May), and Jessica Borusky’s 24-hour porch performance (June), hewed toward subversive politics and playful reimaginings of existing institutions. They use the community setting as an entry point into larger conversations about how to use what’s available. If what’s available is a raw interior and a small patch of land, Open House will make do.

“Being in this context — in an older home in a neighborhood — is the most important foundation we have in deciding relevant shows,” says Frederick, a photographer. “We go back and forth between work that is directed toward the art community and things that are more interesting to people in the neighborhood. People know art galleries as being polished, so when people come in and see non-traditional work in here, they experience the show rather than view it.”

Clanton adds: “We aren’t necessarily trying to draw people here from the Crossroads to look at art, but we are trying to get our neighbors involved in other projects.”

One of those projects is a community natural-dye garden in the back and a native flower garden out front, two plots of land neighbors can access for their own use. (Clanton, who has a background in art and education, also wants to convert the garage into a communal workspace.) To further dismantle the structures — physical, digital, and emotional — that separate neighbors and prevent social intimacy, Open House is hosting projects like Emily Cox’s Community Post, an ongoing local program that officially launched on April 1st but will continue throughout the city without a set ending. The concept behind Community Post (“ComPost”) is sort of like passing notes in class. A network of pen pals pass along letters to friends via other friends who might see them first. It’s “an alternative postal system where everyone is a courier and the world is your mailbox,” as Cox says.

“You are personally implicated when someone hands you a note to pass along,” says Cox. “There isn’t some unknown worker in another city, or miles of internet cables to do it for you. I want people to think critically about how we connect with one another — and what alternatives we are capable of creating.”

On the opening night of Community Post, a family — parents and their teenaged children — wandered in. It turned out that they were the grandchildren and great-grandchildren of a woman who once lived at the residence. Clanton doesn’t know how the family found out about their gallery, but, she says, “The parents encouraged their kids to be a part of Community Post, so the whole family sat down and wrote letters.”

Thought it’s hard to say what will happen with those letters, the encounter brought forth precisely the type of neighborly spirit Open House seeks to incite. But it’s also hard to say how long Open House will be around.

“As awesome as it would be to build a lasting community art space,” says Frederick, “we also realize this is likely temporary.”

Maybe someday, though, decades from now, Clanton and Frederick will — like that family — return to the spot where they once opened a small, subversive gallery. With any luck, the community spirit they’ve endeavored to create will remain alive.