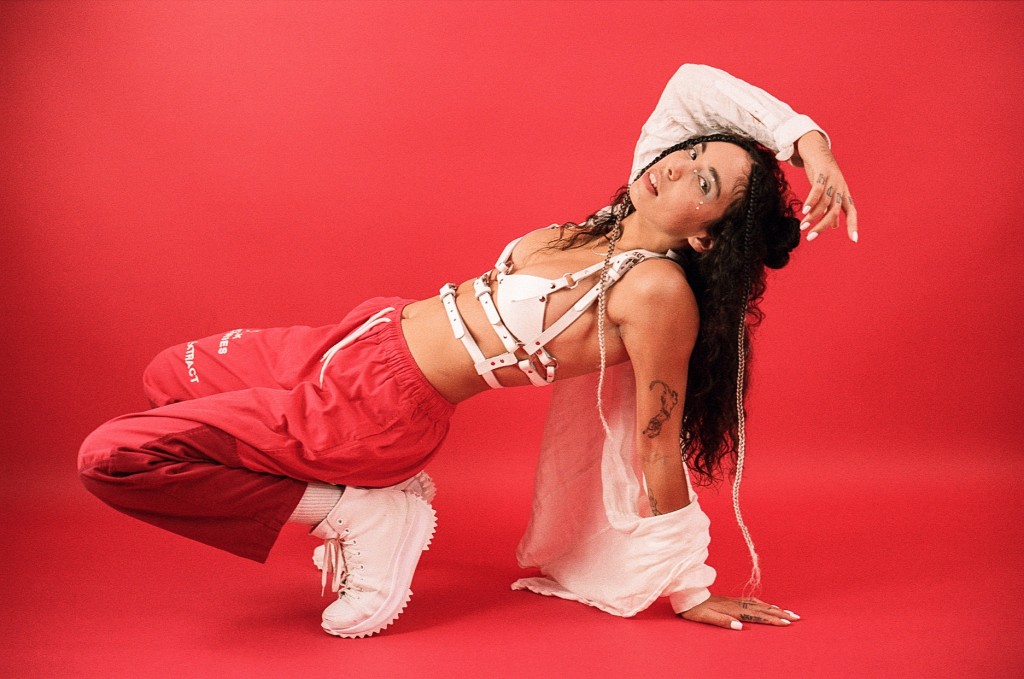 When we called last week, the Asheville, North Carolina singer-songwriter Indigo De Souza was shacked up in Durham. De Souza and her bandmates had been quarantined together and using that time to rehearse, fix their van, and prepare for their upcoming tour with Lucy Dacus.

In a quick interview, we discussed the very in-the-moment style of her songwriting, the album she just finished recording, and what to expect from her performance in Lawrence later this month.

The Pitch: You grew up in a small town in North Carolina and have been known to associate that town with country music and bluegrass. Do you have a soft spot for those genres?

Indigo De Souza: I mean, I do have a pretty nostalgic soft spot for those genres, but I can’t really say that I draw inspiration from those anymore. They were very formative for me. And I like those memories. I don’t listen to as much bluegrass or country as I used to. I listened to a lot of Townes Van Zandt and Dan Reeder.

We asked Julien Baker a similar question, but you have louder moments on both of your albums. Have you ever been interested in making more “extreme” music? Closer to punk or metal?

I just finished recording my next album, and it will be out in about a year from now. In that album, I do feel like there was an array of feelings, but there were definitely a couple songs in there that were very extreme or very intense and loud and more punk than normal. But then also side by side with country songs and really soft pop songs and techno even.

Some artists you enjoy include Frank Ocean and Arthur Russell. Do you have any unique experiences or connections to either artist?

With Arthur Russell, when I’m listening to his music, it makes so much sense to me and makes me so happy and embodied, and I just never really get tired of any of his albums. I’m always inspired by his lyrics, no matter how many times I’ve heard them. He does a lot of just off the cuff, seemingly, just stream of consciousness stuff, which is awesome. And that album, World Of Echo, brings me into a psychedelic space, almost like I’m on mushrooms or something.

Songs like “Habit Of You” are so particular, and even if you haven’t experienced those exact moments, you’re connecting with it. Then he gets more vibey and spacey on songs like “Tone Bone Kone” and World Of Echo in general.

Yeah, exactly. And then the one that’s like “I’m taking time out to clean up my room.” It’s called “Time Away.” He’ll do songs that are lyrically full but are also so childlike and playful and are not portraying a really deep idea. And then other ones are very emotionally deep.

You’ve talked about how “Kill Me” was based on an old webcam recording demo that you rediscovered a year later. Are you revisiting a lot of older recordings on your next album?

With this new album, maybe a couple songs are based on older demos, but the majority of the album is all newer songs that I wrote during the pandemic. I Love My Mom and Any Shape You Take are kind of from a similar space but are still very different, but are, in my mind, just kind of similar.

You’ve mentioned how the last two albums have been companions since they were written around the same time for the most part. Did you feel any pressure with the turnaround on this album?

I’ve been worried about that my whole life because I’ve heard people say that they put out a couple albums and then they start to feel all this pressure from the music industry. Their art becomes this kind of demanding job, and then they put out music that’s not very good because they’re having a hard time or whatever. But I just feel really inspired still and I feel like all these newer songs that I wrote—I’m just as connected to as old ones I’ve written, if not more.

You describe your style as “off the cuff,” and you’re not over-analytical. That style of songwriting must lend itself to less frustration since you likely channel whatever feelings you have at that exact moment.

Yeah, exactly. Being in the music industry is like—I’m not gonna push myself to write songs. I just will write songs because I always have and always will. And I’ll just let it happen when it happens. I’m not frustrated at myself if I haven’t written a song in months because I know that it will come back and when it does, it will be genuine.

Is there anything different about your set for the upcoming Lucy Dacus tour?

Yeah, on this tour we are starting to use a drum pad with some samples in it, which is actually a big change for us. I used to play keyboard on some of the songs and that was just becoming pretty distracting for me. I’m not very good at keyboard.

It’s just completely new to us. But that’s going really well and it’s really nice for me because I don’t have to play anything for those songs. I can just sing.