John Wood believes there is enough evidence of a possible crime by the former president to warrant a Justice Department investigation. 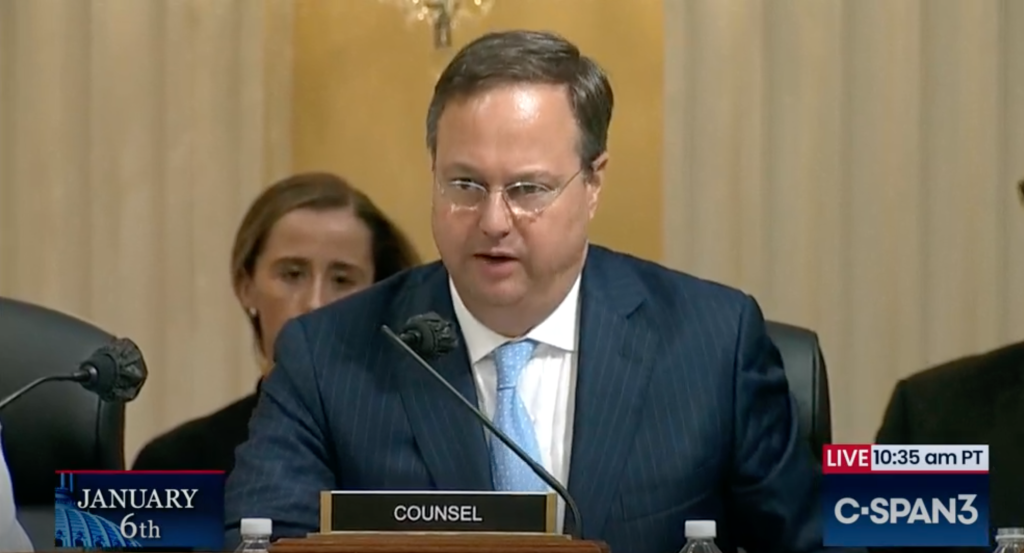 John Wood questioning a witness during a hearing of the U.S. House Select Committee on the Jan. 6 attack on the U.S. Capitol. // Screenshot: C-SPAN

An attorney running as an independent for the U.S. Senate in Missouri says Congress’ inquiry into the Jan. 6 insurrection has turned up enough evidence to warrant a criminal investigation of former President Donald Trump by federal law enforcement.

John Wood, a Republican and former U.S. attorney who until last week served as senior investigative counsel for the Select Committee to Investigate the January 6 Attack on the U.S. Capitol, announced Wednesday that he was running for the U.S. Senate as an independent.

Part of his motivation for entering the race, he said in an interview, was the need for Missouri to elect a senator willing to stand up for democracy itself.

“When you see people attacking the U.S. Capitol because they’re unhappy that the vice president wouldn’t unilaterally decide the outcome of the election, I mean, we’ve kind of lost our consensus around following the Constitution and preserving our democracy,” he said. “Part of living in a democracy is accepting the results of an election regardless of whether your team wins.”

That condemnation extends to the former president, Wood said, who still refuses to accept the results of the 2020 election and whose rhetoric is “really over the top and dangerous.”

Wood, 52, said that with the congressional hearings still ongoing it would be premature for him to say whether or not he believed Trump committed any crimes by encouraging his supporters to march to the Capitol and “fight like hell” on Jan. 6, 2021.

But “morally, and ethically,” Wood said, Trump “bears a lot of responsibility.”

Facing allegations that he committed violent sexual misconduct and stole from a veterans charity, Greitens was forced to resign from office in 2018 to avoid impeachment and settle a felony charge.

Earlier this year, his ex-wife accused him of spousal and child abuse.

Greitens has denied all allegations of wrongdoing, though not under oath. And thus far the accusations have not hurt his standing in most polls of the race.

The prospect of a Greitens nomination played into his decision to join the race, Wood said. But he intends to run an independent campaign regardless of who emerges from the GOP primary, he said, because each of the leading candidates in the field are too extreme.

“This race is about more than just one U.S. Senate seat,” Wood said. “My hope is that when I win, it’ll send a message to both major parties — not just in Missouri, but across the country — that while being divisive and extreme may help people get their party’s nominations, it’s going to hurt them in a general election.”

To get on the November ballot as an independent, Wood will need to submit petitions signed by 10,000 registered voters by Aug. 1.

On Thursday, Danforth announced a super PAC he founded called Missouri Stands United plans to spend as much as $20 million between now and November supporting Wood’s candidacy. The PAC is already on the air with ads featuring Danforth calling on all Missourians to unite and support an Independent who can help us to heal the nation’s divisions.

“We will be working to ensure voters across Missouri know who John is and urging them to take the first important step in support for a new way in our politics: Sign a petition to get John on the ballot,” Danforth said.

A St. Louis County native, Wood is currently living in Kansas City with his wife and two children.

He served as U.S. attorney for Missouri’s Western District from 2007 to 2009 and before that held several roles in the George W. Bush administration. He was working as general counsel for the U.S. Chamber of Commerce when he stepped down in September to become senior investigative counsel for the Jan. 6 committee.

Wood described his ideology as “​​what used to be considered a mainstream conservative Republican.

“I believe in limited government, lower taxes, less government spending, less regulation, strong law enforcement, strong national defense and judges who will interpret the law rather than make the law.”

He agrees with the recent U.S. Supreme Court ruling overturning the constitutional right to an abortion, and says he supports a near universal prohibition on the procedure. But he would like to see Missouri law changed so that its abortion ban includes “exceptions for rape, incest and the life of the mother.”

Only abortions conducted in cases of a medical emergency are permitted under Missouri law.

The government should not prohibit the use of contraception, Wood said.

He supports the Second Amendment, Wood said, and would have voted in favor of the bipartisan gun safety bill recently passed by Congress and signed by President Joe Biden in the response to the mass murder at an elementary school in Texas.

“I applaud Sen. (Roy) Blunt for his leadership and being part of a bipartisan coalition to get something done,” Wood said of the gun bill. “But I think it’s tragic that it required, you know, a national tragedy to force action.”

Wood says he has no intention of playing spoiler in the Senate race this fall, though he knows he faces an uphill battle running as an independent. But he thinks voters are tired of what politics has become and are ready for something new.

“I’m still a Republican,” he said. “I am not leaving the Republican Party. I’m just running an unaffiliated campaign because I think Republican primaries have become a race to the bottom to see you can be the most divisive and the most extreme.

“So for the people who supported Ronald Reagan and Jack Danforth and Kit Bond and Roy Blunt and John Ashcroft, that’s who I am,” he said. “I’m a traditional Republican and conservative.”