Independence, MO’s charming, old-school eateries (plus a brewery!): a guide 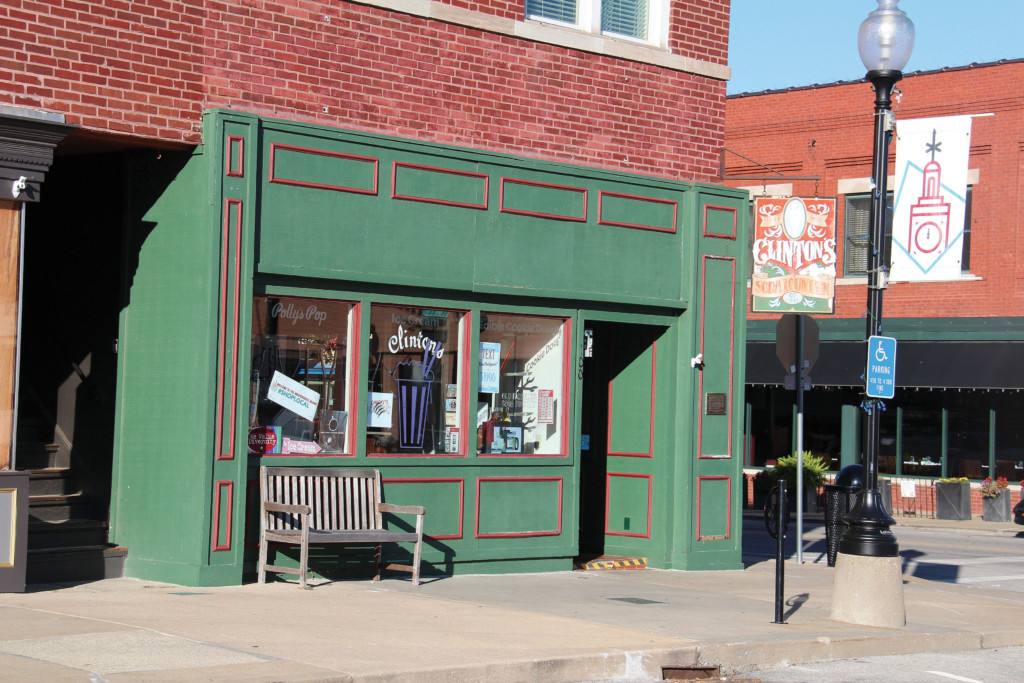 People dump on Independence all the time. It’s the Florida of the Kansas City metro, the supposed meth capital of America. Etcetera.

It ain’t right. Sure, it can get a little rough over there. But Independence is huge—120,000 people, the fifth-largest city in Missouri—and brimming with fascinating history, not least of which is the fact that it’s the only city in the state that can claim a U.S. President. If you know where to look and are willing to make the drive (it’s not far), there’s plenty worth exploring in KC’s neighbor to the east.

That extends to the food. You won’t find any James Beard Award winners here, but there are tons of wonderful (and affordable) places that hearken back to what used to typify Kansas City: burger joints, Italian red-sauce restaurants, old-fashioned ice cream parlors, even Southern seafood. Below, a by-no-means comprehensive (again: Independence is huge) breakdown of a few of our favorites.

This no-frills former Burger King serves up classic Southern-style seafood. (An aside: We have a soft spot for restaurants operating in buildings still haunted by the design of a former tenant.) Though the menu at Sam’s is extensive, you’ll want to opt for a seafood or chicken platter, then add two sides. On the seafood end of things are generous baskets of cornmeal-crusted fried tilapia, jumbo shrimp, or crab and fish cakes. Chickenwise, go for whole fried wings, livers and gizzards, or giant fried tenders. Sam’s also specializes in stick-to-your-ribs red beans and rice, gumbo, macaroni and cheese, and fried okra. You won’t spend a lot, and you definitely won’t leave hungry.

At Clinton’s Soda Fountain, history lies beneath your feet. As a young lad, President Harry S. Truman worked in this building when it was a soda fountain and pharmacy. Later on, the building, which dates back to the 19th Century, hosted a variety of other retail pursuits. Today, though, it is once again a soda fountain (and the 100-year-old marble bar remains). Order a chocolate phosphate (an old-fashioned fizzy drink made with carbonated water, flavored syrup, and phosphoric acid) or just dive deep into a sugar coma with edible cookie dough, ice cream sundaes, cookies, cupcakes, or even just a Polly’s Pop—itself a proudly Independence-based soda company. 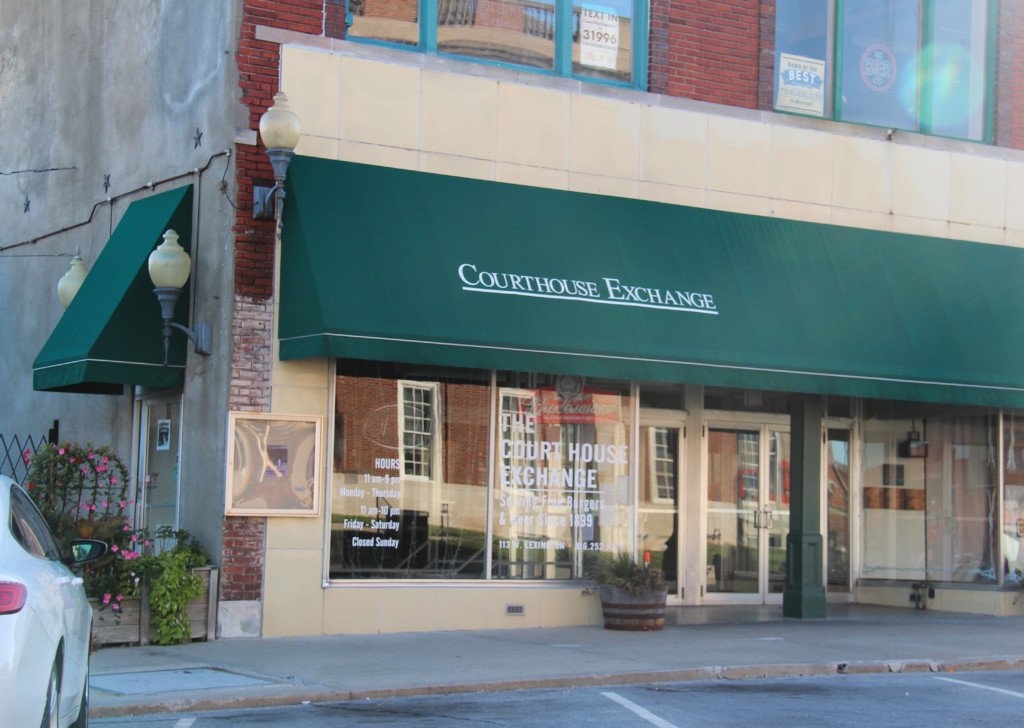 The original Courthouse Exchange in the heart of Independence opened in 1899, and though the ownership has changed, the goodwill lives on. The restaurant originally specialized in generous sandwiches, something it still offers (a KC-area diner wouldn’t be complete without a preposterously large pork tenderloin), but its menu has expanded over the years to offer more comforts, including chicken fried chicken, fried pickles, pot roast stroganoff, onion strings, fried chicken livers and gizzards, and, of course, pie. The ambiance alone is worth a stop in: The restaurant occupies the historic building’s rock-walled basement, and in the warm months you can drink and dine al fresco, right across from Independence Square. 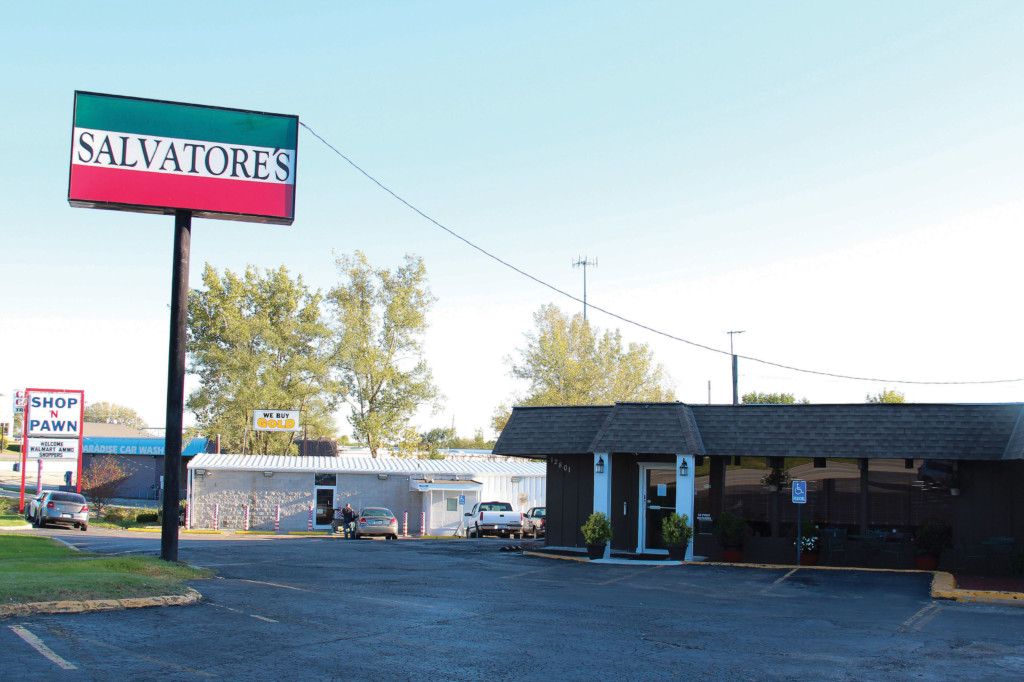 Those who enjoy being drowned in garlic, marinara, breading, and mozzarella (hi!) will find much to love at Salvatore’s. The restaurant—named after the son of Alfio “Fred” Garozzo, cofounder of Garozzo’s; it was originally called Garozzo’s Due when it opened in 1991—serves many of the classic Garozzo’s dishes, including chicken spiedini, stuffed artichokes, veal parmigiano, and chicken marsala in an environment bursting with checkered vinyl tablecloths, string lights, and loads of artificial plants.

If you’re into Fifties-style retro burger joints, Mugs Up is a can’t-miss classic of the genre. This drive-in diner, open for more than 60 years, specializes in house-made root beer, “loose-meat” burgers, and chili. Give the real, live carhops $10, and they will bring you back a Whiz Burger (patty, bun, onions, pickles, and cheese); a deep-fried burrito; onion rings; chicken nuggets; and a root beer—plus change. (Although you may also want to schedule a doctor’s appointment.) 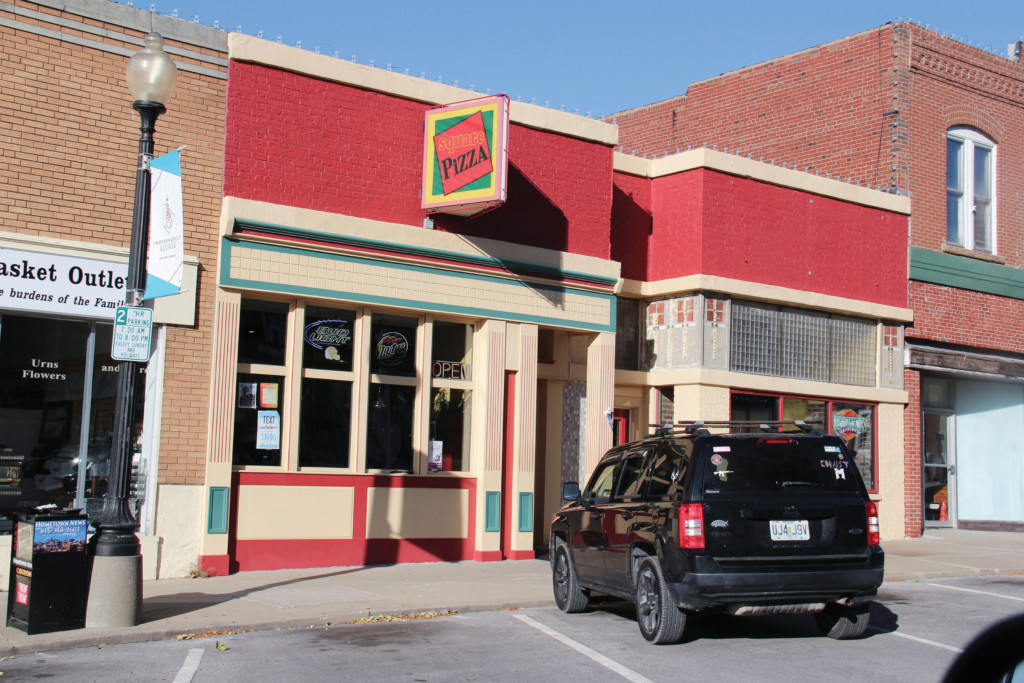 Major Eighties childhood vibes abound at Square Pizza. Located, as its name suggests, on Independence Square, the place is outfitted with arcade games, black-and-white tiled floors, and red vinyl booths. The from-scratch pizza is cooked to order in, yes, square pans; the crust is yeasty and the toppings are bountiful. We go classic in spots like these—pepperoni, baby—but the menu options are fully 2019, with a variety of toppings (pine nuts, feta cheese) and gluten-free and cauliflower crusts. 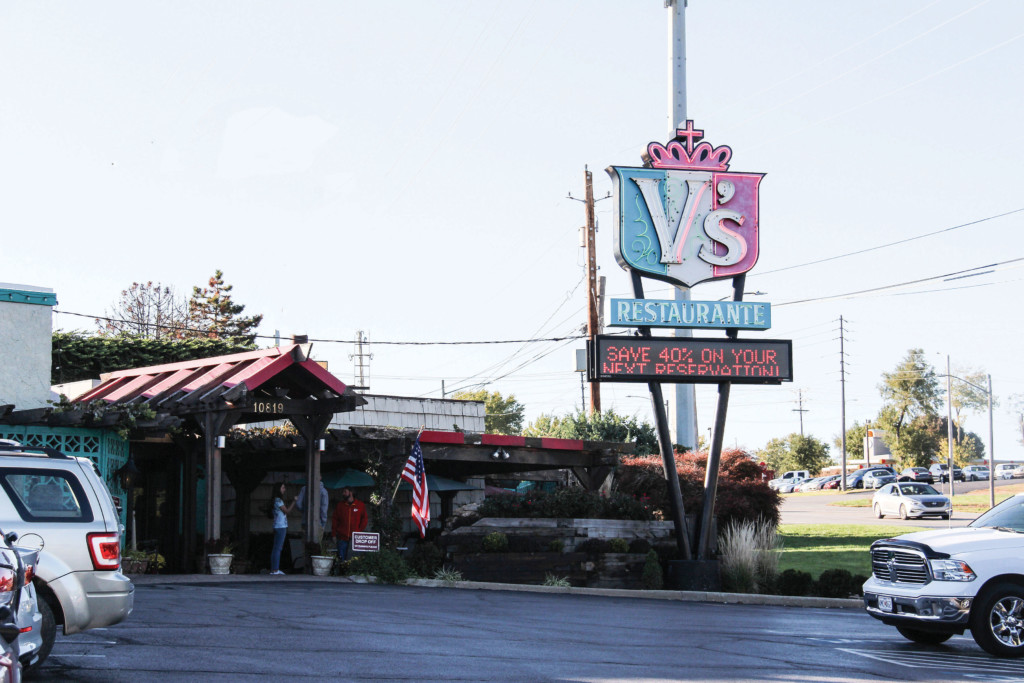 Opened in 1963, V’s is an Independence classic, and it still functions as a nightly gathering spot for lifelong residents, who gather over beer, wine, toasted ravioli, big-ass slices of prime rib, and lasagna. (The patio, which boasts a giant fountain, is also worth a visit.) We recommend the veal scallopini, which is available as a special on Mondays. This veal steak is pounded thin, breaded, and deep fried, then baked in a slow-roasted tomato and pork sauce (sugo) and plated atop a nest of fresh angel hair pasta with bell peppers and sausage. Midwestern Italiana at its finest. 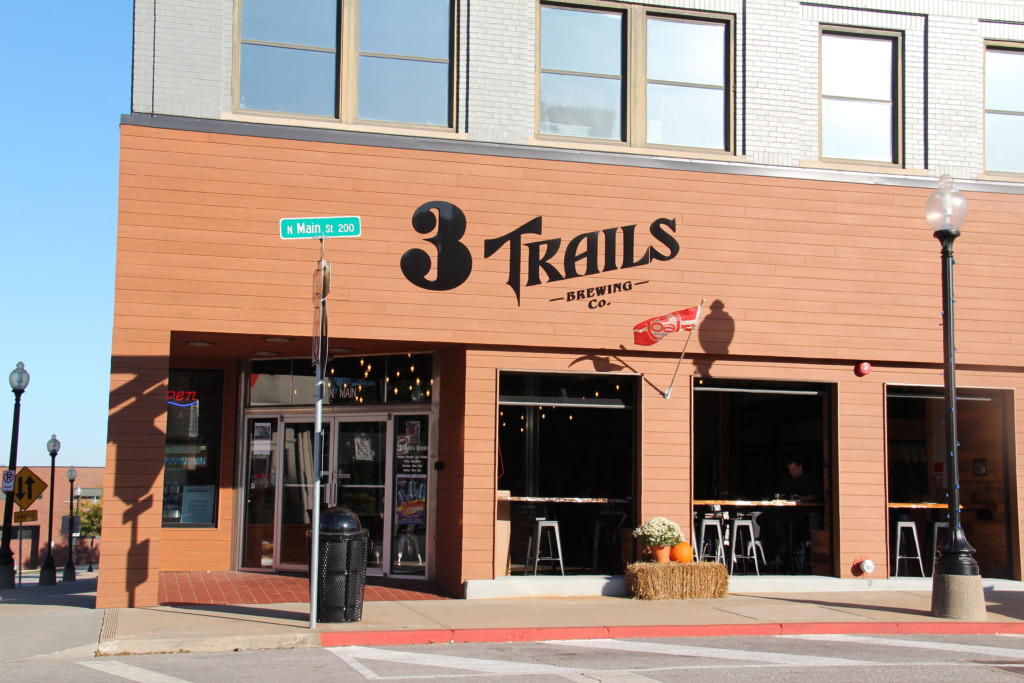 This brewery and bar opened on Independence Square earlier this year and has quickly become one of Independence’s top hangouts. Though 3 Trails carries a wide selection of local and national brands, we’d encourage you to try some of the beers made in-house. The Trail Dragger, a Russian imperial stout with hints of vanilla and cocoa nibs, is a smooth drinker despite coming in at a hearty 10.2 percent ABV. On the opposite end of the spectrum, we’re keen on the Faded Reality, a bright kettle sour brewed with agave and pomegranate. No food here, but they’ll let you order in from nearby restaurants like Square Pizza and Courthouse Exchange. 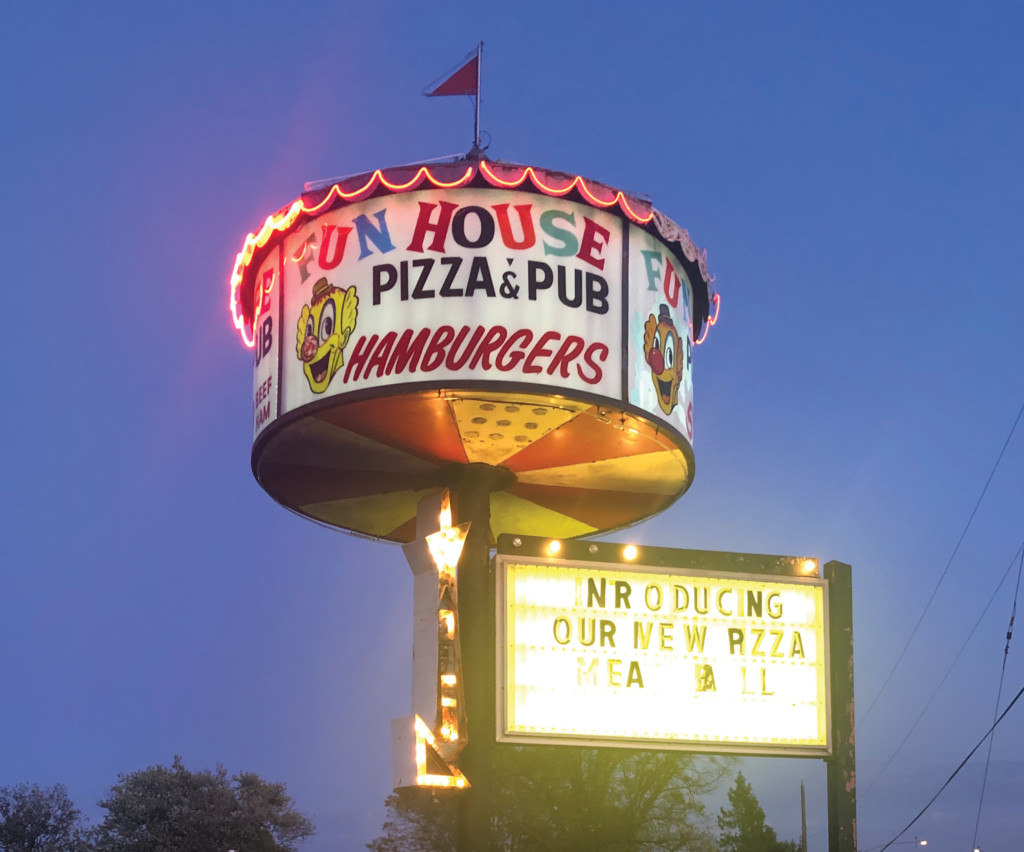 We can’t not include Fun House on this list. Ostensibly a pizza party destination for children, the restaurant has opted not to make much in the way of upgrades since opening 51 years ago. As a result, it’s instead something of a kids’ nightmare factory: stern signage, dim lighting, ancient mechanical horsies, Looney Tunes-era wall art, and, uh, multiple bone-chilling clown images. But, hey, they’ve got damn good daily specials ($5.99 one-topping small pizzas on Tuesdays, and the small is like a medium), the dough is still made from scratch every day, and the pies are cooked in those same original ovens. They’re still pretty good, too. Long live Fun House. 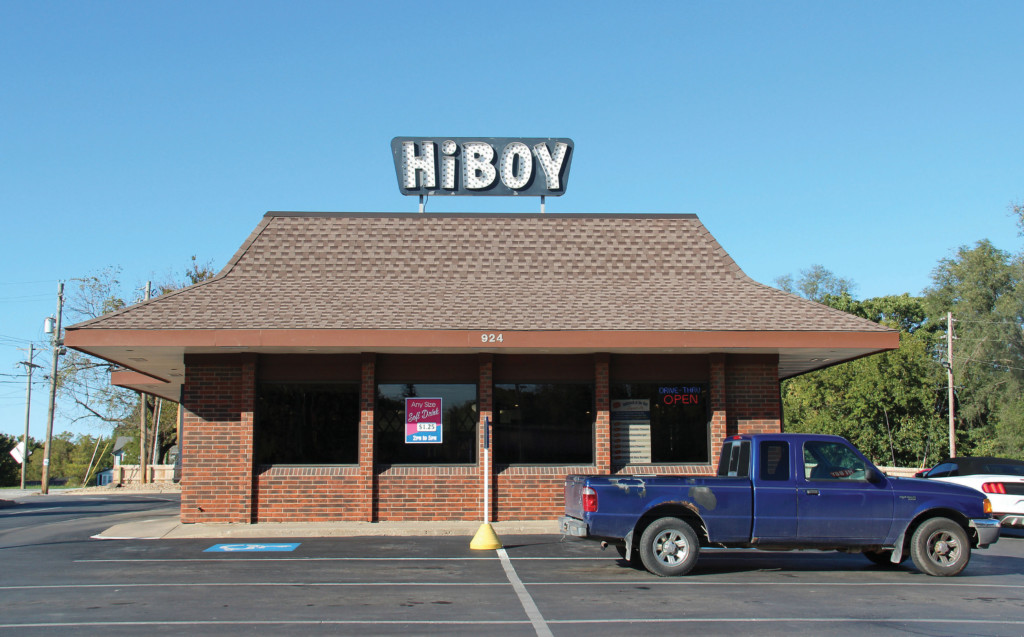 Roll in to this classic burger counter and start with the signature quarter-pound “Hi Boy,” a damn-satisfying midcentury hamburger topped with cheese, pickles, onions, and Hi-Boy sauce (we think Thousand Island?). If you’re not the red meat type, go for the pork tenderloin, a fried fish sandwich with tartar sauce, fried pickles, stuffed tots, shakes, floats, limeades—you get the picture. There are two HiBoys in Independence; we’re partial to the 24 Highway location for its old-school bona fides.

Best of KC 2020: Chef Nick Vella (RIP) was the rising, rising star of the food world